An explanation and an apology

There is a long tradition among ship watchers to exchange photos at Christmas time showing ships in snowy or icy conditions. I was going through some photos from 1977 and grabbed the photo that was part of my previous post and included it with no identification of the two tugs and the oil rig.

I did not intend to make it a guessing game or a mystery quiz, since I do have the names of all three recorded. So starting in reverse order they are:

The Sedco 704 one of seven semi-submersible oil drilling rigs built by Halifax Shipyards. This one dates from 1974 and was a known as a "mid-water floater" with a rectangular platform supported by columns on pontoons. It could work in water depths to 1,000 ft (later revised to 1,200 ft) and drill depth to 25,000 ft. It had a major drydocking and refurb in 1992-1993 at Verolme Botlek in Rotterdam, which consisted mostly of upgrading welds.

After a period working off Nova Scotia it operated in the North Sea for successor company Transocean. The rig was scrapped in Turkey in 2017.

Background tug, Point Vigour, built in 1962 by Davie Shipbuilding in Lauzon, one of six sister tugs, all single screw, 1,000 bhp. Eastern Canada Towing Ltd acquired the tug in 1973 and it was renamed Point Vigour, they had it had refitted with a Kort nozzle and its single Fairbanks Morse main engine was upgraded. 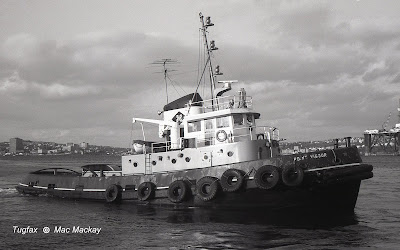 Also in 1977, Point Vigour posed off the ECTUG dock with another oil rig in the background, the triangular platform Sedco J also built in Halifax.

In 2007 McKeil Marine bought the tug and renamed it Molly M 1. It is still operating on the Great Lakes and St.Lawrence with the occasional foray into salt water. It will be sixty years old in 2022, but is nevertheless going strong. Two sister tugs, which have remained in Canadian operation, Point Viking and Point Vim are also still operating. The other three were sold foreign and are believed scrapped long ago.

Foreground tug is the Pointe Marguerite one of two tugs ordered by MIL Tug (formerly Foundation Maritime) for service in Sept-Iles, QC. Built by Collingwood Shipbuilding in 1973, they were heavily reinforced for work in ice, and had an icebreaker bow. Powered by a pair of 12 cylinder GM engines, they were rated at 4300 bhp (but often quoted as more than 5,000 ihp). MIL Tug was sold to Eastern Canada Towing Ltd while the tugs were under construction, and ECTUG employed them as planned in Sept-Iles.

Hauled out on the Dartmouth Marine Slip, Pointe Marguerite shows its icebreaking bow. On the adjacent slip Atlantic Towing's Irving Birch superimposes its funnel, lifeboat and mast. That is Sedco 704 in the background again.

Tragically Pointe Marguerite was crushed between two ships November 14, 1978 in Sept-Iles Bay and sank immediately with the loss of two lives. Sister tug Point-aux Basques is still in service, now with Groupe Océan as Océan Basques as is the replacement tug, built to essentially the same design, Pointe Sept Iles now as Océan Sept-Iles. 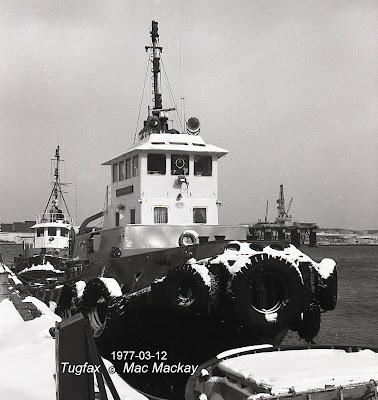 An enlargement of my "Christmas" photo shows the subjects in slighly more detail.

Wishing all readers a Merry Christmas and Happy and Healthy 2022. 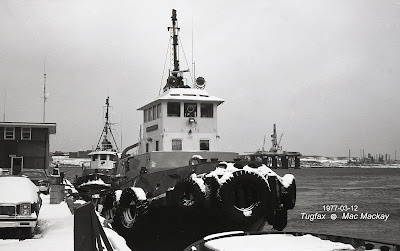 A wintry scene from the old Eastern Canada Towing (ECTUG) dock in March 1977.

(Oil rigs were a common sight in Halifax harbour in those days.)