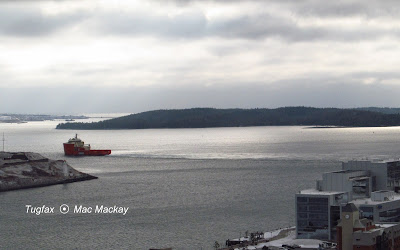 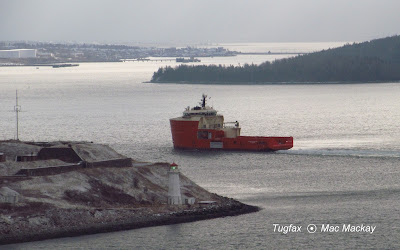 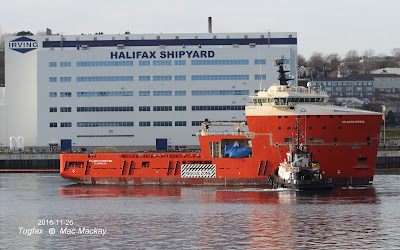 There is not much to add to the title of this post. The vessel went to sea today, after a compass swing,  and returned this evening. It will go to Bedfrod Basin tomoorow mrning then out to sea again.

Canadian tug owners, although business competitors, have also co-operated with each other from time to time when needed. These more or less amicable arrangements have seemed strained on the St.Lawrence River however. Groupe Océan and Svitzer Canada are now vying for the same work and are ''duking it out'' in several ports. I wouldn't call it a war, but there have been several skirmishes and a couple of battles.

The first, and perhaps most surprising was the battle of Sept-Iles. Océan outbid Svitzer for the Iron Ore Company of Canada contract in Sept-Iles, long the turf of Svitzer, going back through Eastern Canada Towing, and MIL Tug to Foundation Maritime. In the 1950s Foundation stationed tugs in the port as it was developing into the iron ore hub of Canada. The Foundation Victor (1956) and Foundation Valour (1958) were built to work in the port, with their high wheelhouses to see the decks of bulk ore carriers. 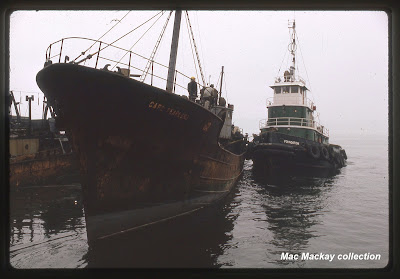 Foundation Victor was built to work in Sept-Iles in the summer and Halifax in the winter. From its  high wheelhouse the master had a clear of the the decks of bulk carriers.


The second generation Pointe-aux-Basques (1972) and Pointe-Marguerite (replaced by Pointe-Sept-Iles in 1980) 4300 bhp twin screw tugs with ice breaking bows, were also built for the port. 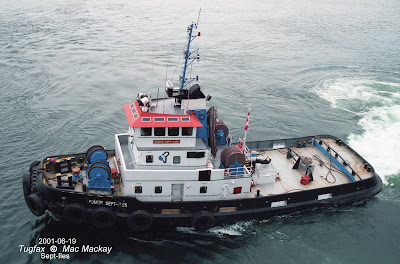 Pointe-Sept Iles also had a high wheelhouse, even though bulkers had become much larger. It was also ice class as the port had become a year round operation.


It was a major surprise when Océan won the contract away from Svitzer in 2012, but they had already established a presence in Sept-Iles Bay working the other side of the harbour at Pointe-Noire. Océan ended up buying both of Svitzer's Sept-Iles tugs and bringing two Canadian built tugs back from Denmark. A major downturn in iron ore production in Labrador and in Quebec has reduced the shipping in Sept-Iles Bay, but Océan has Océan Arctique and Océan Sept-Iles (ex Pointe-Sept-Iles) stationed there. 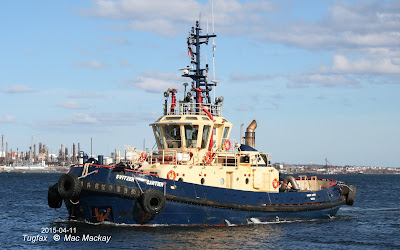 Svitzer Cartier was brought in to work at Port Cartier, but its contract was not renewed. It now works in Montreal.

In 2015 Svitzer brought in Svitzer Cartier (ex Svitzer Wombi, Hai Gang 107) a Chinese built 5400 bhp VS tractor to assist ArcelorMittal's two VS tugs in Port-Cartier. That service was short lived, and late last year Océan announced that it had formalized an agreement whereby Océan Arctique would come in from nearby Sept-Iles to assist as needed. 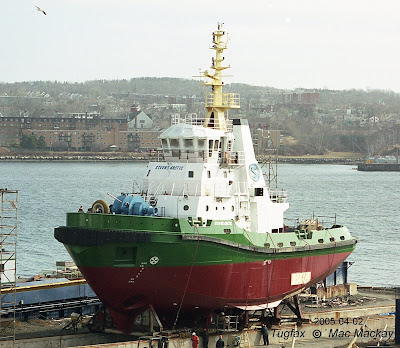 Stevns Arctic about to be re-launched after completion at Halifax Shipyard. The tug worked in Europe until Groupe Océan brought it back to Canada and renamed it Océan Arctique.

ArcelorMittal's Brochu and Vachon - both 1972, 3600bhp VS are ideal for working the tight confines of Port-Cartier, but there is more work there than two tugs can handle thanks to continued iron ore cargo and grain exports. It will be interesting to see if an ASD can cut it in that port.

What really broke the truce, if any, however was Svitzer's combined move into Montreal and Baffin Island.

Montreal had been the turf of McAllister Towing since the 1950s, when the New York based company established a Canadian branch run by Donal McAllister. It consolidated a slightly rag tag operation of old steam tugs when the St.Lawrence Seaway opened also taking in Pyke Salvage of Kingston, ON. When Groupe Océan took over the former McAllistewr operation, and again modernized the fleet, they had the port to themselves.

Océan also had the contract for the Baffinland iron mine project and built the 8,000 bhp super-ice clas tugs Océan Tundra and Océan Taiga for the work. They also built smaller tugs and acquired barges to build the port and provide lighterage services there. However when the project was delayed, ArcelorMittal ended up in control and awarded a new tug contract to Svitzer.

Svitzer Nerthus and Svitzer Njal, both Canadian-built ice class 5,000 bhp ASDs built in 2009 were brought back from Denmark for the seasonal arctic work, then assigned to Montreal in winter. Now joined by Svitzer Cartier and Svitzer Montréal they are eating into Océan's work  Rumours persist that Svitzer may bring in more two tugs for that port. 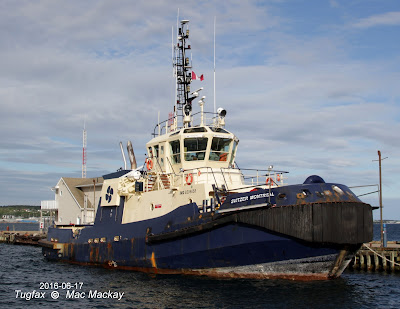 The latest salvo appeared this month when Océan announced that they had been awarded management of the tug Pointe-Comeau by Cargill Grain Co Ltd in Baie-Comeau. Despite its name, the tug has always been owned by Cargill, but has been managed since it was built in 1977 by Eastern Canada Towing  (which became Svitzer.) Even its predecessor tug Foundation Vibert was built in 1961 for Cargill Grain and was managed by Foundation, then MIL, then ECTUG, even being renamed Point Vibert while under Cargill ownership and ECTUG management. 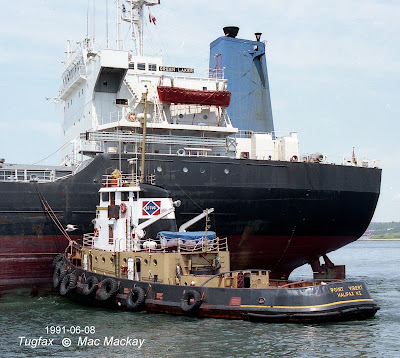 Purchased by ECTUG and reassigned to Halifax after being replaced by Pointe-Comeau, Point Vibert's skipper had a good view of the lines up to the bulker's deck. It was one of the few twin screw tugs in the fleet, but that feature helped it in the tight confines of Baie-Comeau. 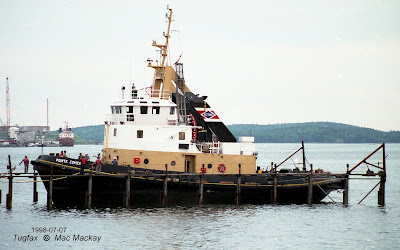 Pointe-Comeau in ECTUG colours, came to Halifax for drydocking in 1998.


Pointe-Comeau has been covered in these pages before, but to repeat, it was built by Marystown Shipyard in Newfoundland in 1977.  A 3600 bhp Voith Schneider tug, it is well suited for the tight confines of Baie-Comeau's aluminum, grain and paper company piers. 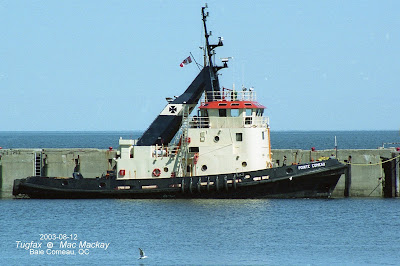 Pointe-Comeau now in Svitzer colours has been stationed at Baie-Comeau since built, and has always been owned by the Cargill Grain Co. Ltd.


Now we enter the speculation stage. When RioTintoAlcan replaced its tugs in La Baie with ASDs, their Alexis Simard, a 3290 bhp VS tug, built in 1980 was orphaned. Groupe Océan, which had been providing supplementary tug service in La Baie, took over the tug in 2011 and renamed it Océan A. Simard. They stationed it in Baie-Comeau for a time, going head to head with Pointe-Comeau. That did not pan out, and for the plast few years the tug has been working in Newfoundland on the Hebron Gravity base project. With that project coming to an end, it will again be looking for work.  (As will other Océan tugs)
If there are VS tugs needed in Port Cartier and in Baie-Comeau, it will be interesting to see where Océan A.Simard ends up. 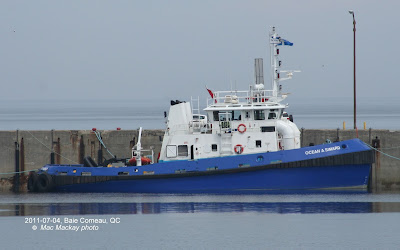 Océan A. Simard will be re-assigned when its work in Newfoundland is completed.

Atlantic Kingfisher - back to its roots

Atlantic Towing Ltd's supplier Atlantic Kingfisher returned to its roots in Halifax January 4 . The ship was built by Halifax Shipyard and launched September 7, 2002 and it was registered in Halifax December 27, 2002. 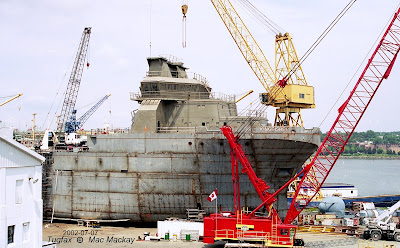 Its very first job was a cable repair project off Rimouski, QC, and it was fitted out for that work in January 2003, sailing from Halifax January 23 and returning February 1.

This time round it will be a re-run, although perhaps not with the same dates.  After tying up at IT International Telecom's base at pier 9 on Wednesday, it went to Imperial Oil for bunkers yesterday and returned to pier 9. (I would have a picture, but a zero visibility snow squall hit as it passed my vantage point).

Today a crane was fitting stern slides over the stern roller. It also has some containerized workshops installed on deck for cable splicing and testing. 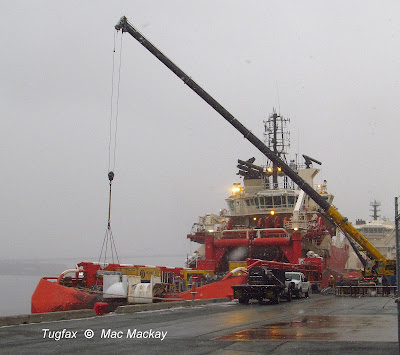 Atlantic Kingfisher is part of the second pair of tug suppliers built for Atlantic Towing Ltd by Halifax Shipyard. It is a U722L class (L standing for LONG). The 16,100 bhp vessel is powered by four 6 cyl Bergens through twin cp screws in fixed nozzles and has a bollard pull in the 170 tonne range.

After its first cable job, the tug has worked largely from Newfoundland but has towed the rig Henry Goodrich from the Gulf of Mexico to Newfoundland and towed the FPSO Terra Nova from its offshore position to Rotterdam.and back.

All Atlantic Towing Ltd offshore vessels are named for birds. Most of the names chosen have no particular significance (e.g. Atlantic Condor is a non-sequitur, since condors are Pacific birds), but the kingfisher has long been the symbol for the City of Halifax.