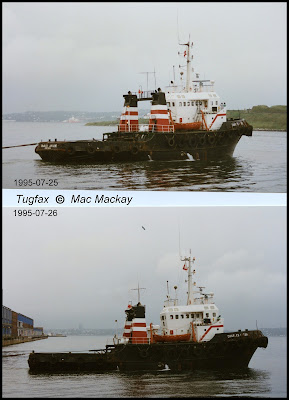 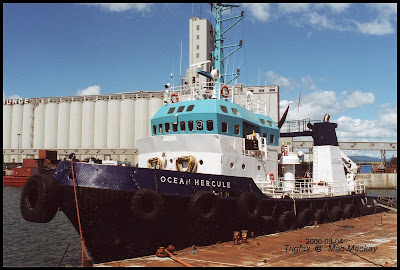 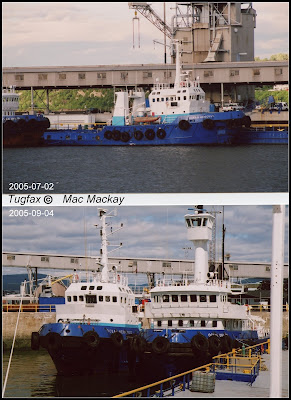 Two more for Océan and a transfer

Groupe Océan has finalized the acquistion of the two ArcelorMittal tugs based at Port-Cartier, QC. Brochu and Vachon were purpose built for Port Cartier in 1972 and were among the first Voith-Schneider cycloidal prop tugs built in Canada. At 3600 bhp they were also among the most powerful for many years.

Earlier this year it was reported that Groupe Océan had been awarded the tug contract at Port-Cartier, and that the two elderly tugs would be retired as of September 30. In mid-September Brochu suffered a serious fire and was retired early. Fortunately Groupe Océan was able to send a tug from Sept-Iles to fill in.

Since Océan Yvan Desgagnés andOcéan Ross Gaudrault have taken over operations in Port-Cartier, it has been reported that Groupe Océan has purchased  Brochu and Vachon. There is no indication where they will be used, but as of this evening they were still in Port-Cartier with AIS giving a destination of Méchins for the Vachon. Although the Verreault Navigation shipyard there is a competitor of Groupe Océan's own shipyard in Ile-aux-Coudres, Verreault has been maintaining Brochu and Vachon for many years.

When Océan's Océan A. Simard (ex Alexis Simard -11)  completed its work in Newfoundland earlier this year, it returned to Quebec for refit and in July was transferred to Hamilton, Ontario.The 3290 bhp V-S tug, originally built for Alcan's operations at Port Alfred in 1980, never really found a home in the Groupe Océan fleet. There was a trial in Baie-Comeau in 2011, but that was short lived.

With two more V-S tugs joining Océan, one has to wonder if they may also head for the Great Lakes where the fresh water and seasonal operation will be kindly to their aging hulls.

Groupe Océan has renamed two tugs it acquired earlier this year from Svitzer. The two tugs completed their obligations with Svitzer at the end of last month and returned from Milne Inlet, Baffin Island where they had been working for the last three summers.

They are a good fit with the Groupe Océan fleet, as they are Georgetown-built, ice class ASD, 66 tonne bollard pull, 5,000 bhp tugs, similar to most of the modern tugs in the Ocean fleet. No assignments have been announced for the tugs yet.


They were built in 2009 by East Isle Shipyard in PEI for Nordane shipping as Stevns Iceflower (ii) and Stevns Icequeen (ii) and sailed from trials in Halifax to Denmark. They were soon chartered and eventually acquired by Svitzer and renamed the same year. 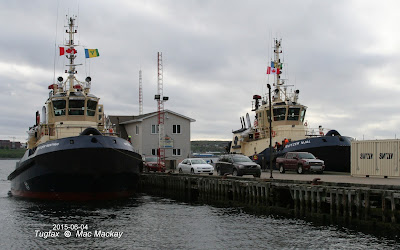 Flying the Barbados flag for the delivery trip, the two tugs arrived back in Halifax in company June 4, 2015 and tied up at the Svitzer Canada dock.

When Svitzer won the Baffinland contract in 2015, they brought the two tugs back to Canada. They were stationed in Montreal in winter and worked in Milne Inlet in the brief summer navigation season from July to October.

In January of this year Svitzer decided to shut down its Montreal operation and sold three of its tugs to Groupe Océan.. The Svitzer Cartier (ex Svitzer Wombi-125, Hai Gang 107 -14) became Océan Cartier and was refitted in Quebec City but has not been assigned any work yet. 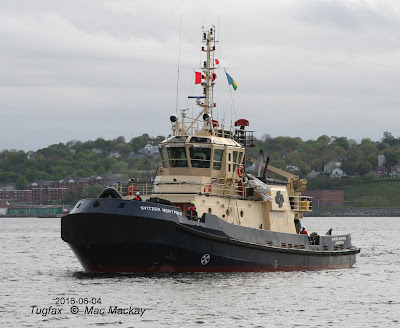 Svitzer Nerthus and Svitzer Njal were committed to the Baffinland project for this past summer but were handed over to Ocean on return south. 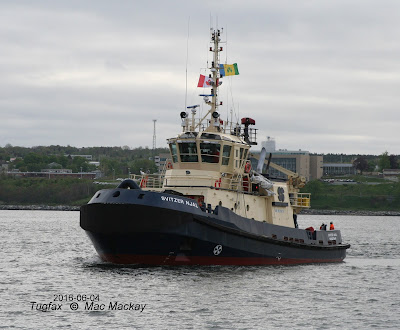 The fourth tug, Svitzer Montreal although a similar Georgetown class tug, is not ice strengthened, and Svitzer re-assigned it to its Point Tupper, NS operation which has the three other Svitzer Canada tugs.

Construction of foundations for the Queen's Marque project on the Halifax waterfront is taking place below sea level. In order to carry out the work a seawall has been built out of sheet piles to keep the water out. Pile driving for the work and placement of the sheet piles has been carried out by a crane mounted on the deck of a sectional scow, built out of smaller pontoons. 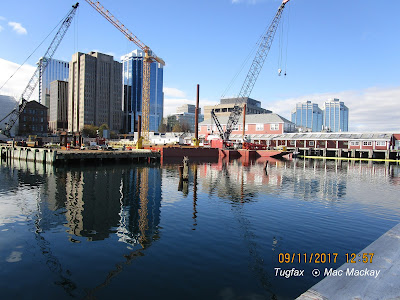 To move the scow, Dexter Construction is using one of their miniature tug boats. It and the scow are working inside the Sea Bridge floating walkway built for the Waterfront Development Corporation to allow pedestrians to bypass the construction site, from the water site. The Sea Bridge, stretching from the Cable Wharf in the north to the Maritime Museum in the south provides an excellent view of construction activity. 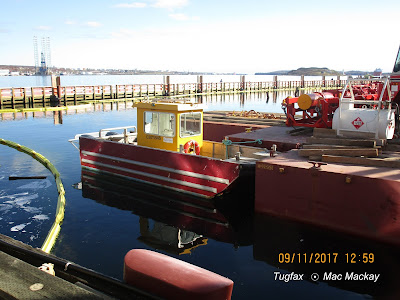 Dexter tug inside the Sea Bridge.

A.F.Theriault + Son of Meteghan, NS, built a pair of the tugs for the Municipal Group, parent company of Dexter Construction, and they worked first on the Halifax Shipyard pier 6 project. Since the tugs are small enough to be transported by truck, they can be used in a variety of locations not normally accessible by watercraft. Because they are under the 15 tons they are not registered by name, but only by number, in this case C20115NS. 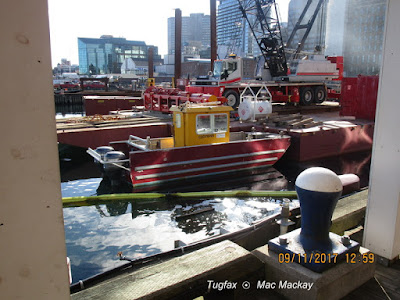 One of two aluminum hulled tugs, that are transportable by road, powered by twin Yamaha outboard engines with a total of 230 horsepower. 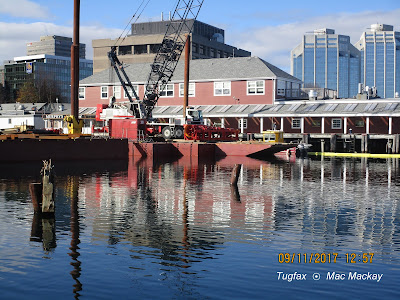 Scow and crane are tucked in between the Cable Wharf and the remnants of the old timber piled Queen's Wharf.