As it plies its frequent runs from Halifax to the Deep Panuke platform off Sable Island the supplier Atlantic Condor will now be conducting research en route. MEOPAR, the Marine Environmental Observation Prediction and Response Network, has announced that Dalhousie University researchers and students will receive weekly data from the ship that will assist in gauging the state of the ocean's health. 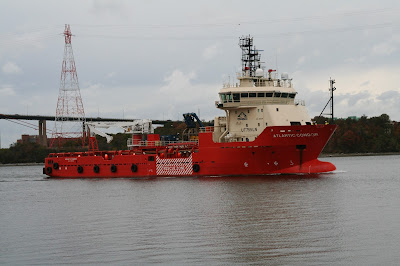 The ship will be fitted with an underwater holographic microscope built by 4-Deep Inwater Imaging of Halifax. The scope will capture detailed images of plankton throughout the year, helping researchers to understand seasonal and climatic variations as they relate to the health of fish stocks.

The project is one of several organized by MEOPAR with funds from various patrons including Irving Shipbuilding Inc (ISI). As part of its contract under the National Shipbuilding Procurement Strategy ISI is obliged to spend 0.5% of its contract revenues on creating a sustainable marine industry across the country.

Atlantic Condor was built by ISI in 2010 and operates for Irving-owned Atlantic Towing Ltd on a ten year contract with Encana to service the Deep Panuke gas project. 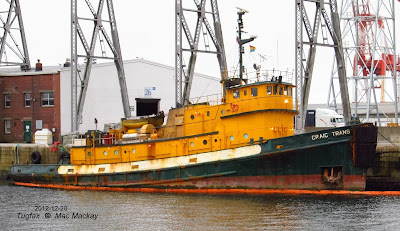 Atlantic Fir - with a little help from my friends

The tug Atlantic Fir made it into Halifax today with the barge Oceanus - but not without the help of all three of Atlantic towing's harbour tugs.

Atlantic Fir (left) has the tow and Atlantic Oak is providing steering from the stern of the barge. Atlantic Larch is nosing up on the barge's starboard bow and Atlantic Willow is standing off the port bow as the barge begins to make its eastward turn off Ferguson's Cove.


Originally scheduled to arrive yesterday afternoon, the tug and barge put back out to the anchorages for about 24 hours while some mechanical and electrical problems were rectified. Then in perfect conditions it entered the harbour this afternoon, keeping to the western channel, but there was no other traffic at the time so there was lots of room to maneuver into the IEL dock in Dartmouth. (The western channel is deeper, and less likely to snag a heavy tow line.) 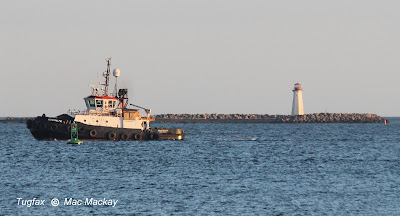 Atlantic Fir is leaving the western deepwater channel (the towline is just visible).

Atlantic Oak with the stern line is ready to swing the barge back into the main channel.

The barge Oceanus is registered in the United States, but is working in Canada under coasting license from September 15, 2015 until September 14, 2016. It was brought in by ATL to make multiple trips from Port aux Basques, Cow Head and Bay Bulls with components for the Hebron Topsides Project. (The topsides will be mated to the gravity base at Bull Arm once the latter is completed). The components include the 400 ft x 100 ft, 340 tonne flare boom, the 5200 tonne drilling support, helideck and lifeboat station components ranging from 30 to 213 tonnes. 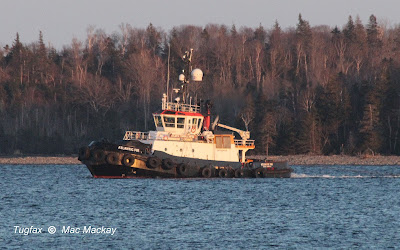 Atlantic Fir is a near sister to the Halifax based Atlantic Oak, a 5050 bhp ASD, built in 2005, with 68 tonne bollard pull and fire fighting gear. It differs visually from the Oak chiefly due to the large sat nav dome, fitted because it does ocean towing.


Earlier in the day Atlantic Towing called on Svitzer to provide the tug Svitzer Njal to assist with both container ships EM Kea and CMA CGM Titus in place of Atlantic Oak. Svitzer Njal and sister Svitzer Nerthus are wintering in Halifax until they go north again in July. Since Atlantic Towing Ltd and Svitzer operate the tugs in Halifax and Point Tupper in a joint venture, we might see this happen again from time to time. It would certainly avoid the kind of double escort we saw yesterday, which is really quite unsatisfactory for a number of reasons.

Atlantic Larch and Atlantic Willow on a Double Date

Large ships transiting the Narrows of Halifax Harbour are required to have a tethered escort tug. The designated tug is Atlantic Oak, which has more than 5,000 bhp is set up for the work with some special strain gauges and an escort skeg. 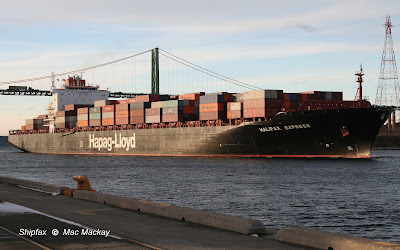 The other two harbour tugs Atlantic Larch and Atlantic Willow  at 4,000 bhppull are considerably less powerful and do not have the hull escort skeg.
This afternoon when Halifax Express was due to sail from the Fairview Cove container terminal, Atlantic Oak was on standby for another job (see below) and was not available and so the other tugs did the job in tandem. 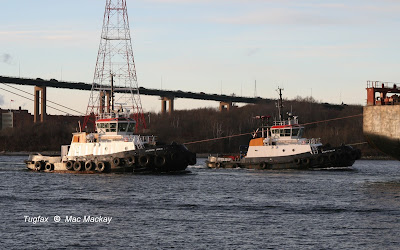 Each with a line to the ship's quarters, I am sure they were able to assist the ship in making its turn past the Pier 9 knuckle, however Atlantic Willow gave her line an awful lot of scope for such a narrow channel. Also with the two tugs as close as they were, I am not sure they would have been very good at braking if they had to stop the ship. They would clearly have been in each other's way.

It was not an ideal arrangement, but I guess it had to be done on time, since the next section of the Macdonald Bridge was coming out, and it was probably desirable to have the big ship well past when that was happening. 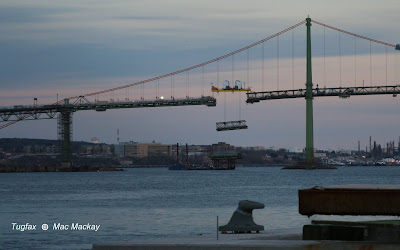 The bridge deck is undergoing replacement in sections, starting from the Dartmouth side (left in this picture), and although the work is so far not over the main harbour channel, it is just as well to keep shipping away to avoid wake. The old bridge sections are landed on a barge and the new sections lifted from the same barge, and great precision is needed. The barge is handled by the tugs Belle D and Halifax Tugger with assistance from Captain Jim. For more on these see:

Atlantic Oak was standing by to assist sister tug Atlantic Fir and the barge Oceanus arriving from Newfoundland. More on that tomorrow.

Criag Trans - it's still not over

The story of the tug Craig Trans should have been over long before now, but it seems that another chapter will be added on February 17. On that date bids will be opened at the office of Cox+Palmer, attorneys, after its most recent owner walked away from the tug (or perhaps more accurately he ran away). 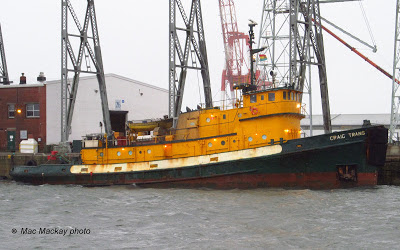 The tug's story as far as Halifax was concerned began with its arrival here December 18, 2012, but in fact it started in 1943 at Tampa Machine Corp where it was built for the US Army's Transportation Corps as LT-648. I told a bit about its subsequent career as Craig Foss on this blog December 18, 2012., but to summarize the legendary Seattle operators, the Foss Maritime Company acquired the tug from the Army in 1960, but kept it mothballed until 1966 when they overhauled it completely, and installed two new GM-EMD engines of 2,000 bhp each, replacing the single Fairbanks Morse. Foss completed all the work at its own shipyard in 1967.

For the first few years of its life with Foss the tug was constantly towing a log barge barge back and forth to Hawaii (40 days each way). Then in 1972 it towed a barge load of lumber from Coos Bay, OR to Camden, NJ and Portsmouth, NH, returning it empty to Mobile  AB. Its seagoing capabilities were never in doubt.

The tug towed regularly on the west coast including many trips to Alaska until 1978 when it made another tow to the east coast, this time from Tacoma, WA to Chester, PA Earl, NJ, Norfolk, VA and Charleston, SC. It then went on to Bay City, MI  to tow a dredge to Baltimore, MD, tow scows to Puerto Cabello,  Venezuela, and two offshore suppliers to Seattle. It was then back to Alaska runs until the early 2000s when the tug was laid up and sold in 2011.

It then entered a shady period where its movements become hard to trace. It did show up September 8, 2012 as Craig Trans when it towed the derelict ferry Queen of Saanich from Anvil Island BC to Lazaro Cardenas, Mexico for scrap. The old Swartz Bay-Tsawassan ferry, built in 1963 had been sold by BC Ferries in 2008 and ended up arrested and derelict until a Federal Court ordered sale in January 2012. It was moored on Anvil Island while copper was stripped out, then towed away. 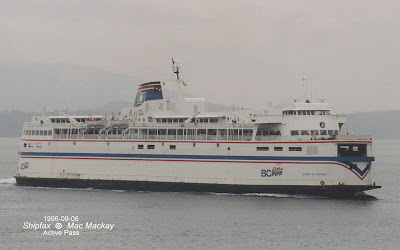 In its prime, Queen of Saanich was one of BC Ferries stalwarts, but ended up in Mexico for scrap, towed by Craig Trans.


When Craig Trans put in here in December 2012 it was en route to Beauharnois, QC to tow away the derelict Kathryn Spirit - see Shipfax   but the crew was without food and the tug was unlikely to get to Beauharnois before the close of the navigation season.
Once tied up at pier 25 it was found to be in despicable condition. Some 53 deficiencies were listed by Port State Control. See these photos and report. The owner, Vesta Shipping, owned by a US based Haitian arrived in Halifax then disappeared, abandoning tug and crew. The latter were repatriated thanks to the generosity of donors and the Mission to Seafarers, but the tug was eventually auctioned off. Its sale price came no where near compensating the agents, the Port, the Atlantic Pilotage Authority, and other creditors who were saddled with the tug for months, keeping it afloat and preventing it from polluting the harbour. 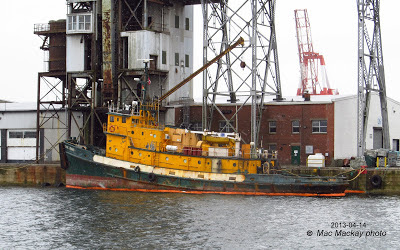 The buyer was identified as a local ship breaker, but a number of his previous purchases have since sunk or have been abandoned - or both - in various Nova Scotia ports. The tug, which had elapsed (or falsified) Bolivian registry, was then registered in Canada as a "yacht" - thus freeing it from any regulations covering commercial vessels.

It ended up at the Secunda pier in Wright's Cove, Bedford Basin where the scrapper has now apparently given up ownership. The pier is in poor condition and will likely be dismantled and the tug must go somewhere else. 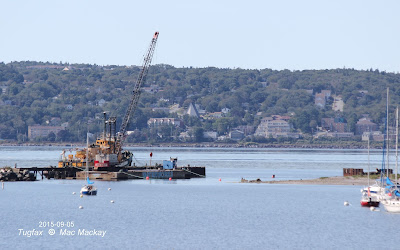 Craig Trans will have to move from the Secunda pier. In this September 2015 photo the Waterworks barge Commdive II was tied up there when it was working nearby.

With the current state of the scrap metal market it won't fetch much at this sale. Let's hope no one thinks they can rehabilitate it and put it back in service, or get it running as a "yacht". One only has to recall the ill fated coaster Fermont that left Halifax under a Kentucky yacht license and within days wrecked on Seal Island. It cost the Canadian tax payer a small fortune to clean up back in 1991. See my Navigation-Quebec blog  Poste #27  for more on Fermont.