The Halifax based anchor handling tug/supplier Venture Sea set out from Halifax September 27 for the far north waters of Davis Strait between Greenland and Canada. 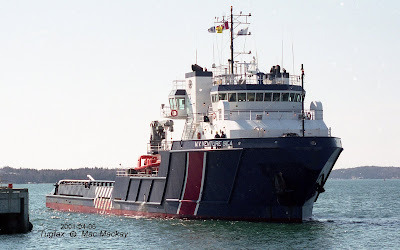 The trip is in response to a call for an assistance from the bulk carrier Golden Opal. A 41,725gt, 74,232dwt ship, built in 2017 by Reliance Defence in Indonesia, it has a cargo of iron ore from Milne Inlet, Baffin Island, destined for Immingham, England. Satellite AIS date shows a very erratic track suggesting a possible steering problem, typical of a ship with ice damage to its rudder.

Welcome back Mister Joe and Oshawa

McNally Construction's tug Mister Joe arrived this evening towing the crane barge Canadian Argosy with the small tug Oshawa. These vessels are regulars in Halifax to support heavy marine construction projects. They work out of McNally's eastern base in Point Tupper, NS. 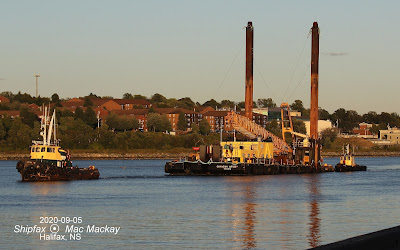 Mister Joe is a twin screw product of Russel  Brothers in Owen Sound, ON, built in 1964 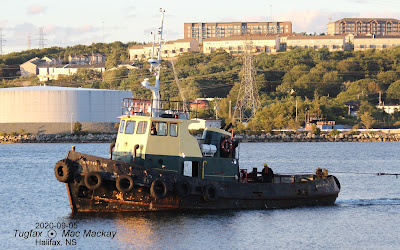 Built as Churchill River for the Hudson's Bay Co it worked in the north until the 1990s when it went to Newfoundland,. It then worked at Bull Arm until 1997 when it passed to Beaver Marine. McNally acquired Beaver in 2001 and it became Mister Joe. It has since been re-engined, and had a new wheelhouse built to the original pattern but with better windows.

Companion on many construction projects is the Oshawa built in 1969 in Whitby, ON by original owners, McNamara Construction. It is also a twin screw vessel. 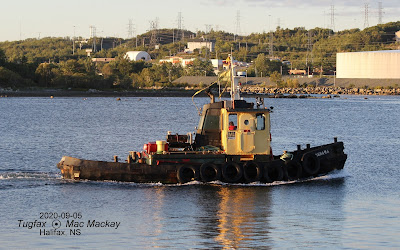 McNally Construction won the contract to dismantle and rebuild the Svitzer Canada (former Foundation Maritime) piers on the Halifax waterfront. The wooden pile structures in very poor condition, and will be demolished. New structures will be built to accommodate a marina, but they will not be of the size of the current piers which date back to the glory days of Foundation Maritime and before. 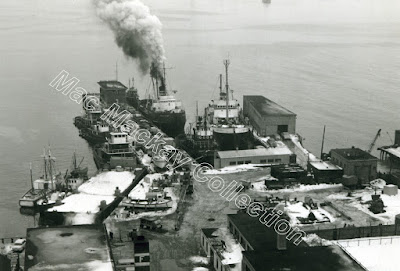 Steam up on Foundation Francis on the south side of the dock. On the north side is the newly delivered Point Victor. Foundation Josephine II sits at the salvage pier. Also readily identifiable is the Banscot with portholes outlined in white. A couple of Glen class tugs and the Banstar or Bansun line the pier. 1956 or 1957 photo.

The photographer just managed to catch the chimney painted like a Foundation Maritime funnel in the foreground.