Maersk Cutter got underway this afternoon on a cable work mission. International Telecom chartered the ship from Maersk, but the cable work will be in Placentia Bay, NL for Eastlink, a cable TV, internet and cell phone service provider. 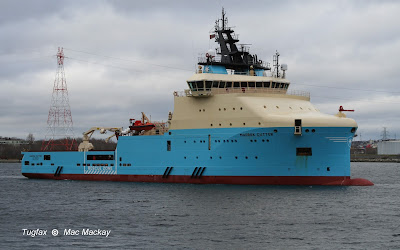 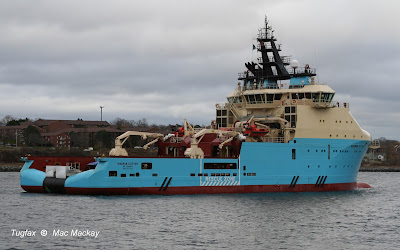 A pair of slides mounted over the stern roller were fitted for cable work. Not visible on deck due to the high gunwales is a container with the side cut out to store cable, and other gear for fibreoptic splicing. I am told that there is a complement of 47 persons aboard for the project.


Who's minding the store?
I had to wonder today who was looking after the drill ship Stena Icemax out in the Shelburne Basin, since all the suppliers that normally tend to it were in Halifax. Several days of bad weather - mostly high winds - may be the answer to why the boats were all in Halifax. 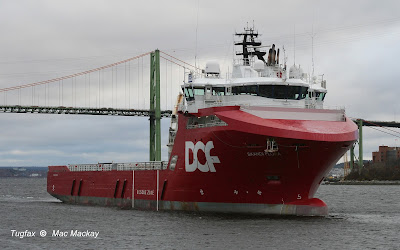 Skandi Flora got away from pier C, swapping places with.... 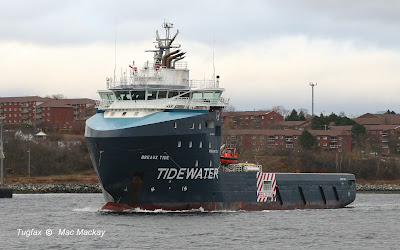 Also at pier 9C Atlantic Tern did some trials in Bedford Basin then returned to the pier. 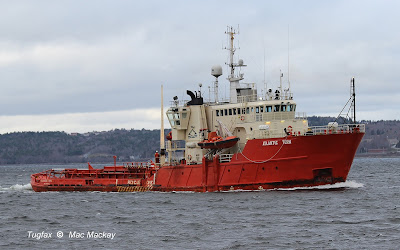 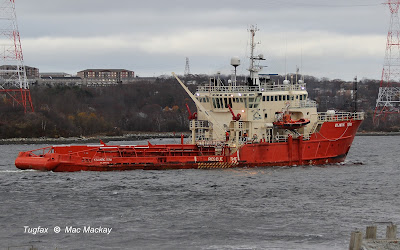 Moving from pier 36 to pier 9 was Kaliutik and its barge Kaligak. 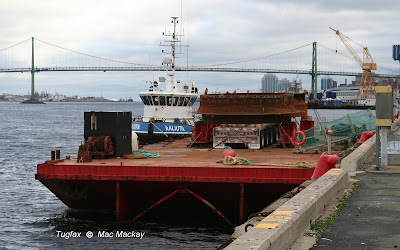 The barge is now loaded with two large steel fabrications for the McInnis cement project in Port Daniel, QC. The castings are independently supported on the deck of the barge with steel pedestals, but a highway trailer is run under them to allow for drive off when it reaches its destination. 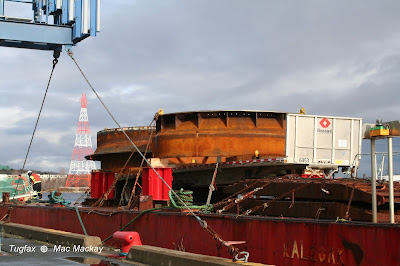 The barge's name is spelled out as kaLIgak. Note the two wheel ramps secured to the deck in the foreground. They are still packed with sand from the last beach landing.

I imagine they are also waiting out the weather for a few days before embarking on the trip.
Interestingly the Kaliutik's AIS signal states that its next port of call is Cornwall, ON. Perhaps not surprising since it s now working under the agency of McKeil Marine. 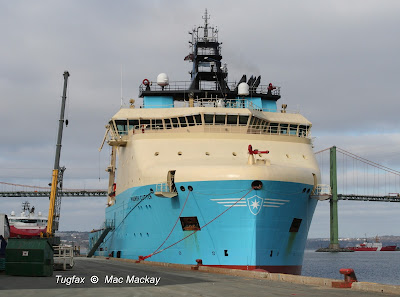 A crane is set up to load gear aboard Maersk Cutter. That is Skandi Flora astern at pier 9C.

It berthed at pier 9A in Halifax, the new home of International Telecom (their former quarters at pier 9 have been annexed by Halifax Shipyard). It appears then that the ship will be doing some cable work just as its former fleet mate Maersk Chignecto used to do. See Tugfax 2015-02

That latter supplier the ex Chignecto Bay sailed from St.John's September 8 or 9 and headed to Tampico, MX.  Its Canadian flag registry was closed October 9 and it was reflagged to Mexico with owners listed as Armamex Naviera SA de CV. No new name has been posted yet.

The Maersk Clipper is the second of and order of two sister, Maersk Clipper is the other, built in Chile (a Canadian free trade partner) and measures 6,490 grt, and about 4,000 dwt. Its engines produce 13,000 bhp and its design bollard pull is 180 tonnes. It is fitted with all the DP and FF bells and whistles.
The ship was not built to fulfill any particular Maersk contracts, so is apparently available on a spot basis.

The downturn in oil work has resulted in more than 30 suppliers from one company alone "stacked" in the Gulf of Mexico and about 100 in North Sea ports. Maersk is laying off employees world wide (and not just in its offshore operations) so it iS good to see suppliers working.

kALIUTIk sneaks in under the radar

I was startled to see the small tug kALIUTIk with its scow (believed to be kALIGAk) at pier 36 this afternoon. The pair arrived unbeknownst to me, and since they did not require a pilot, there was no advance notice of its arrival. 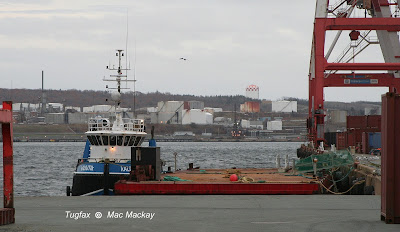 The tug was built in 1998 at Nanticoke, ON (where it is still registered) and fitted out in Port Dover, ON, by Dovercraft Marine. Measuring only 82.79 grt, it is rated at 550 bhp, with twin screws. Owners Labrador Unuit Development Corp of Happpy Valley-Goose Bay (and its subsidiary Torngait Ujaganniavingit Corporation of Nain) had the tug and two scows, Kaligak and Sappatak built to service a stone quarry at Ten Mile Bay, near Nain. They were to transport stone from the quarry 40 miles to Iggiak where it was to be loaded onto anchored ships for export to Europe. The quarry contains various decorative feldspars such as  labradorite (also known as firestone) and anorthosite (called "Blue Eyes") used for sculptures decorative architectural stonework.
The quarry operation was closed in 2009 and since then the tug has had periods of idleness and has worked around Nova Scotia at various times. It has also been advertised for sale for several years. 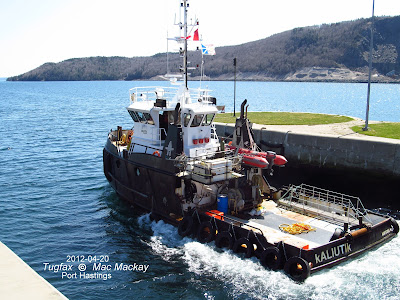 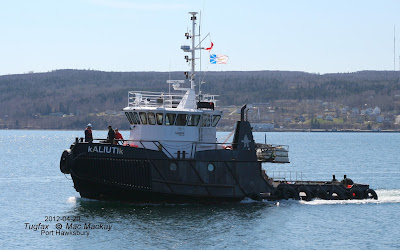 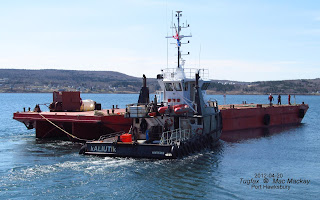 where it picked up the barge kALIGAk.

With the Shell drilling program well underway off Nova Scotia, the suppliers are making a steady progression in and out of port. On Saturday November 7 Jones Tide arrived and on Sunday November 8 Breaux Tide arrived.They are operated by Atlantic Towing Ltd on charter from Tidewater. 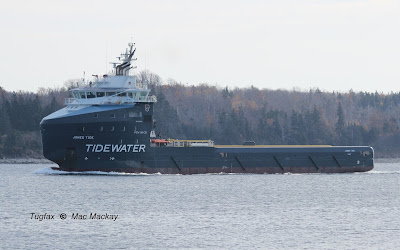 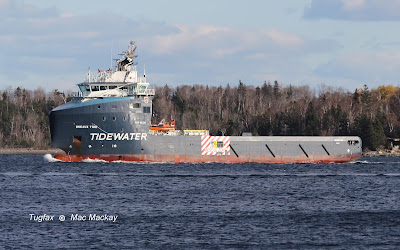 Ostensibly sister ships, there are difference in appearance and fittings between the two, built about a year apart.


Breaux Tide had to wait for Jones Tide to leave the oil dock before going in for fuel, but instead of anchoring it "set itself up on DP". It was a very windy day, and there anchorage areas were occupied, but the ship used is Dynamic Positioning and remained beautifully steady in position for a few hours until it was time to move.

The tug Boa Odin returned to Halifax with the barge Boa Barge 33. On its first visit a month ago, it loaded the first section of the Novadock floating drydock and towed it out to Tampa, FL. 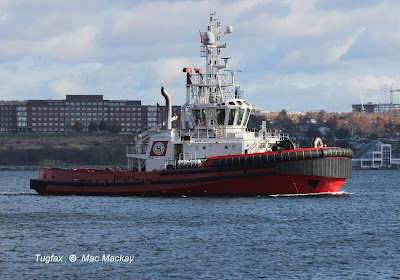 Tomorrow the tug, with assistance from harbour tugs, will load the second and larger section of the Novadock for the same destination. Meanwhile Boa Odin moved to pier 25 to take on fuel, delivered by truck. 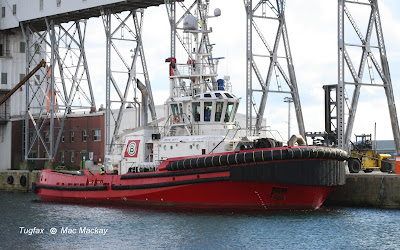