New Gig for the Atlantic Condor

The Atlantic Condor has been mobilized from layup in Stephenville, NL to carry out an interesting contract. 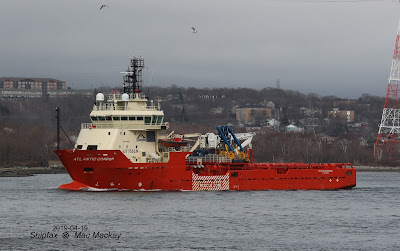 After drydocking at Newdock in St.John's for renewal of classification and certificates, I hear that the supplier will proceed to Halifax where it will load two Canadian Coast Guard  lifeboats as deck cargo and transport  them to Victoria, BC. Atlantic Towing Ltd won the contract with a $3,449,999.00 bid, and must deliver the boats by April 30, 2021.

The two boat were built in 2020  - CCGC Cadboro Bay by Chantier Naval Forillon in Gaspé, QC and CCGC Florencia Bay by Hike Metal Products in Wheatley, ON. At present Cadboro Bay is based in Sambro, NS filling in while the regular boat is in refit and Florencia Bay is at the Bedford Institute.

Each boat weighs close to 53 tonnes*, so will require shore based cranes to load and offload. The contract also requires provision of cradles, spreaders and rigging as required for safe transport. Each boat is valued at $ 8 million, so great care will be required.

Atlantic Condor was built by Halifax Shipyard in  2011 and is a UT755LN class cargo vessel, of 2334 gt, 3240 dwt to serve an extendable ten year contract with Encana to support the Deep Panuke gas field. That installation has been capped and removed in 2020, and Atlantic Condor has been without work.

I do not know if the ship will return to this coast on completion of the delivery. However more new CCG lifeboats are under construction - these two are number 7 and 8 of an order of 20, so the ship may find similar work in the future.

* [ Despite the CCG's web site that asserts that the boats "weigh 75 gross tonnes" the tender documents give the weights of the boats as 52.93 tonnes and 52.336 tonnes. Actual weight at time of lift will depend on what fuel, water, stores, etc., may be on board.

[A gross ton is a non-linear measure of volume (not weight), where traditionally 100 cu.ft = 1 gross ton. Gross tonnage is now determined by international protocol and is the product of the ship's internal volume in cubic meters, multiplied by a variable logarithmic amplification factor, or sliding scale, and is thus not solely a direct measurement. However as a relative comparative term it is still useful in describing ships sizes.]

Offshore tug and supply operators have experienced a dramatic slowdown in activity over the past year. The reasons are related directly and indirectly to the pandemic, which resulted in a drop in demand for petroleum products and cutbacks in offshore activity by the oil companies.

Most tug/suppliers work under long term contracts, but even some of those have been subject to early cancellations, or the contracts simply have not been renewed or extended when they expired. Some boats have been placed on the "spot market", meaning intermittent work under daily rate hire.

In 2020 Atlantic Towing Ltd had 13 vessels in its offshore fleet. Two of them, Atlantic Eagle and Atlantic Raven are working on the Pacific coast as Emergency Towing Vessels under contract to the federal government.  By the end of the year two boats, Atlantic Kestrel and Atlantic Merlin were operating in the North Sea and four were operating out of St.John's for Hibernia or Hebron: Atlantic Griffon, Atlantic Shrike, Atlantic Heron and Paul A. Sacuta. Three more were laid up in Stephenville, NL namely Atlantic Kingfisher, Atlantic Osprey, Atlantic Condor (see next post) and Atlantic Tern.

A fifth tug in layup was Atlantic Hawk which has now been reported sold to Russian owners and renamed Sayan Jarl under Cyprus registration. 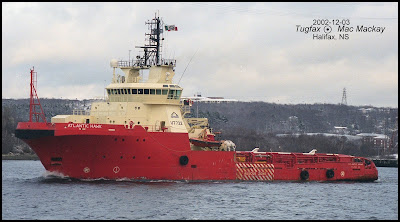 Built in 2000 by Halifax Shipyard, it was the second of four similar vessels of Ulstein UT 722 design. (The first was Atlantic Eagle.) The third and fourth boats were UT722L design, meaning they were somewhat longer. Equipped as an anchor handling tug supplier, it has engines totaling  14,411 bhp. 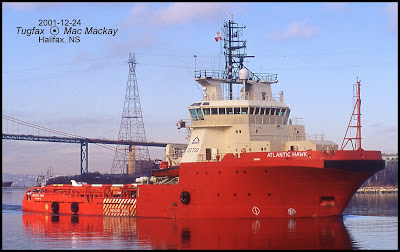 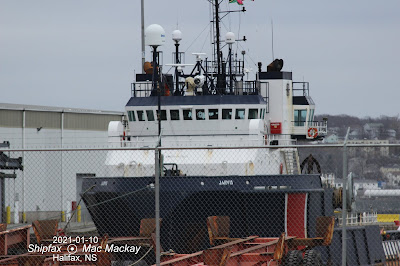 AIS is not showing a destination, but the boat is heading generally south if that is any indication of where it may be going.

Of the many pictures I have taken of this tug over the years, none have shown what it is really like out at sea. However perhaps this one gives some idea of how this boat might perform. 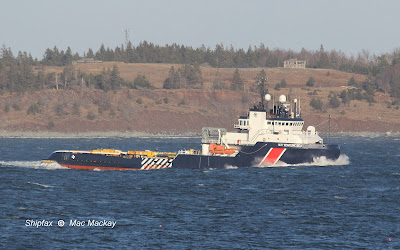 More Towing for the Elm (revised)

Atlantic Towing's Atlantic Elm returned to Halifax this morning towing the barge Scotia Tide from Liverpool, NS. After entering the harbour it was met by Atlantic Oak and made its way toward Eastern Passage. 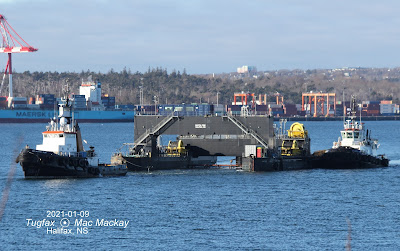 The twin hull barge, built by Aecon in Pictou in 2015 for a reported $30 million, was designed to carry and place a 1300 tonne tidal turbine on the sea bottom of the Minas Passage in the upper Bay of Fundy. After a failed first placement, and a second placement in 2018, the turbine operators declared bankruptcy leaving an estimated $14 million owing a number of creditors. The barge was ordered sold at auction to recoup some of the loss.

Ironically, among the creditors is Atlantic Towing Ltd ($1.4 million) and RMI Marine ($444,720) . It was RMI's motor boat that picked up the insurance line and float as the tow neared the Cherubini dock in Eisner's Cove. 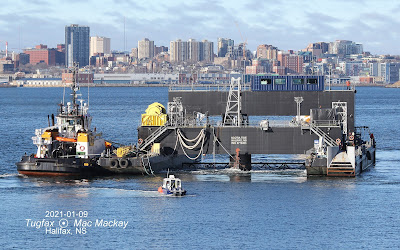 The barge, is now owned by Halifax Offshore Consulting and SPB Equipment of Wabush, Newfoundland and Labrador, a company specializing in iron and metal salvaging, dismantling structures, and dealers in recovered components. It is unclear what their intentions may be at this time. The tidal turbine remains inoperative on the bottom of the Minas Passage, and this barge could conceivably be used to recover it.

Atlantic Elm moved back to Pier 27 after securing the barge. 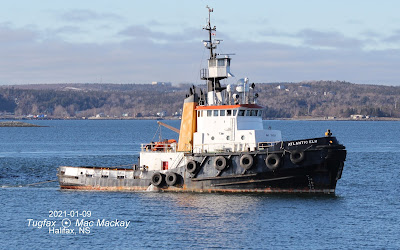 The latest arrival in Halifax is the former Venture Sea. Now sold by Secunda Canada to Virgo Ships and registered in Vanuatu, the tug/supplier is sailing under the name Jarvis, although this has not been painted on in the customary places. 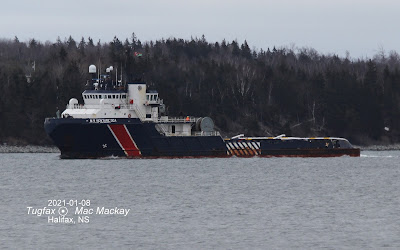 Looking a bit bedraggled, and still carrying its former name, the tug arrives in Halifax this afternoon.

As Venture Sea it was noted on this blog as recently as September when it was mobilized out of layup in Halifax and sent north for a towing assignment.

On return from that job the tug went to Shelburne, NS where it has remained until yesterday when it departed for Halifax. On arrival this afternoon it berthed at Irving Oil's Woodside terminal for refueling. 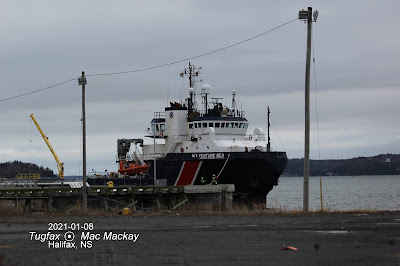 The letters "M.V." formed no part of the tug's official name, but were applied by the builders and have remained ever since.

Although proving its worth so recently as a towing vessel, there is speculation that this may be the end of the road for the tug, and that it will be headed for the scrappers. After fueling it is scheduled to move to pier 27 so it may be some time before we learn of its fate. 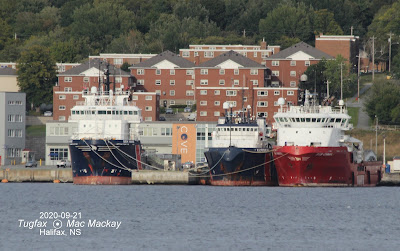 Back in September Venture Sea was laid up sandwiched between its two newer and larger fleet mates.

Secunda Marine, founded in Halifax in the 1980s has been a subsidiary of the Norwegian company Siem Offshore since 2016. Siem is in the process of re-financing and has shed a number of idle vessels. With no work in the oil and gas offshore Nova Scotia, it may be a matter of time before other vessels in the fleet are sold or re-assigned too. Both Siem Commander and Siem Hanne remain laid up in Halifax with few short term prospects. 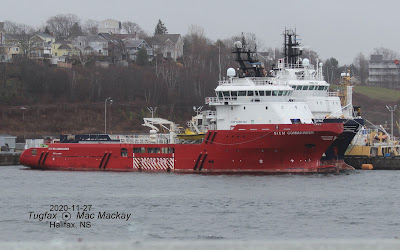 In addition, on December 22, SIEM received early termination notice for its Siem Pilot working for Suncor off Newfoundland. The charter was to last until November 2022. The total Siem fleet world wide was reported to be 33 vessels before the Venture Sea was sold but may now be down to 19.
Another Canadian flag vessel, Siem Diamond was reflagged back to Norway in November 2020.

With Christmas and New Year holidays over, it was time to get back to work for some temporary visitors. Atlantic Elm sailed light tug on January 7 giving Liverpool, NS as destination. It only took a few hours to reach that port, and the tug appears to have tied up at the former Mersey Paper dock in Brooklyn.

This morning, January 8 the small Harbour Development flotilla got underway for Saint John. Wavemaster lead off towing the dredge Cranemaster. 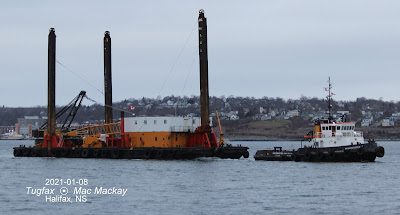 The tug is the former Royal Netherlands Navy tug Regge, built in 1987. It was renamed in 2018 after HDL acquired and refitted it to suit Canadian regulations. 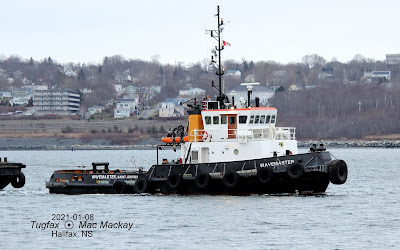 They were followed by Atlantic Tamarack towing the split hopper barge HD-9. Unfortunately when I was poised for a photo a sudden snow shower blotted out the scene. It soon blew over and a distant shot was possible.

Harbour Development Ltd is a subsidiary of Atlantic Towing Ltd, part of the J.D.Irving group of companies. It is essentially a dredging contractor and is nominally based in Halifax. Its equipment works throughout the region, often in the Saint John, NB area. (Their website is woefully out of date, so do not take information from it at face value.)