Roseway and the reef balls (and more)

A project to promote marine life in Halifax  got underway yesterday and part one was completed today. Since the commissioning of a new sewage treatment system, marine life has experienced a slow comeback in the harbour waters. Scientists have now developed a perforated concrete cone or ball which, it is hoped, will accelerate the growth of some marine growth in shallow water where sunlight can penetrate. Called reef balls, the devices also promote eddies and currents and provide a sheltered enclosure for some types of plants and animals.
Irving Shipbulding Inc is funding the balls, and they being placed by Dominion Diving Ltd. Using their tug Roseway (built in 1960), their work barge DD 2000 (built in the mid-20th century*) and the scow RB Barge (built in 1994) Dominion Diving placed a series of the balls close to shore near Point Pleasant Park's Black Rock beach.


1. The reef balls were lowered to the bottom by crane and divers ensured their correct placement. The barge DD2000 is secured by four anchors.

Once work was completed today, Roseway began the tow back to Dominion Diving's base in Dartmouth Cove. 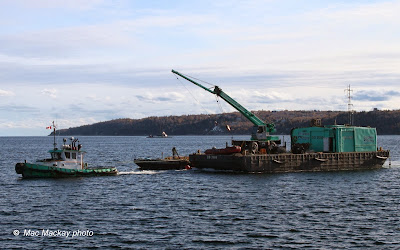 2.Roseway gets under way. The scow RB Barge was used to transport the reef balls from base to site.  (In the background a pusher tug handles a barge** headed for the Northwest Arm.) 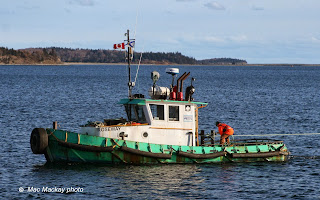 3. The deckhand lets out a little more line for the tow home.

Foot Notes:
*  The barge DD 2000 was once the Dartmouth Marine Slips Work Barge No.1: 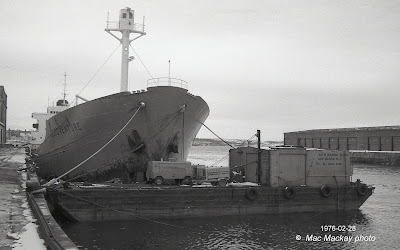 4. Pictured in 1976, it was not new then!  I have always suspected that it was acquired in the United States with a number of other scows used in construction of the oil rigs at Halifax Shipyard in the 1960s, but have never been able to confirm it.

** The bandy legged legged spud scow in the background of photo number 2 is this item: 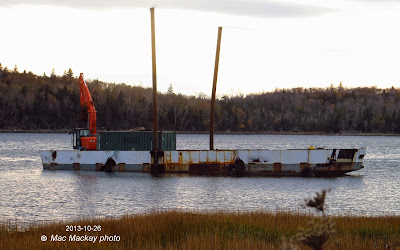 5. T.K.L. No.6 was built in 1976 by Sydney Engineering + Dry Dock Co Ltd as the cable ferry Angus MacAskill for the Province of Nova Scotia. It is now owned by R.J.MacIsaac Construction Ltd of Antigonish, NS. In photo 2 it appears to be under the control of the pusher Lina see: http://tugfaxblogspotcom.blogspot.ca/2012/04/tug-lina-history-not-known.html

From the (black and white) shoe box

With little tug activity to remark upon in Halifax recently, it was time to dig into the shoebox for some oldies.

Back in 1983 Cartier Construction, a Quebec company, included most of the assets of the former McNamara Construction Co. Among those was the tug Oshawa (built in 1969) and still going today for McNally Construction Ltd. 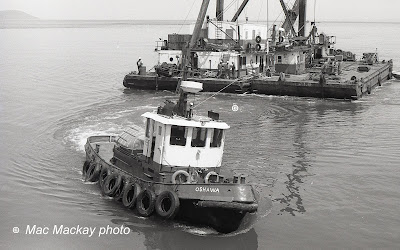 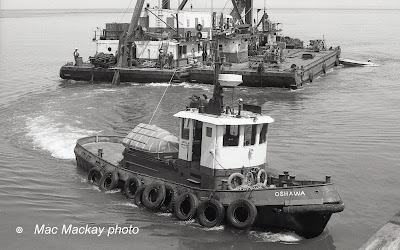 Also in Toronto in April 1984 was the Canadian Dredge and Dock Co's tug Traveller. It visited Halifax two times that I know of. It was built as the steam tug Dalhousie Rover in 1941 by Muir Bros DD of Port Dalhousie, ON for C.S.Boone Dredging & Construction. However due to wartime needs it was chartered to Saint John Tug Boat Co. It arrived in Halifax October 24, 1941 from Pictou and cleared for Saint John., NB. (It may have returned to the Great Lakes seasonally.)
On March 12, 1945, while towing a ship from Saint John Dry Dock it capsized and sank in Courtenay Bay, with the loss of three lives. Six others were rescued. The tug was raised, repaired, and called in Halifax October 31, 1945 en route to Sorel.
On June 29, 1946 it foundered in Lock 1 of the Welland Canal and six were drowned. It was again raised and repaired and renamed Towmaster.
In 1949 it was briefly renamed Shediac (possibly for work in New Brunswick), but was soon renamed Traveller by Canadian Dredge and Dock Co Ltd.In 1960 CD+D rebuilt it at their own yard in Kingston, ON, converting it to a diesel tug, upping its horsepower from 450 ihp to 720 bhp with a 6 cyl B+W Alpha. Its steam winch and windlass were converted to electric by Russel-Hipwell of Owen Sound, who also supplied Lister auxiliaries, steering gear and pumps from the Steelcraft line.
The tug seems to have lead an uneventful life thereafter, lasting until 1995 when it was broken up in Port Maitland, ON.
Its similarity to the Glen class tugs of the RCN, built very soon after, but as diesel tugs, is worth noting.


See the following link for an incomparable photo:

Update:
For a photo album of the unsual launch see:
http://www.charlevoixendirect.com/index.asp?s=photo&album=526
Posted by Mac at 10:33 PM No comments:

It is debatable whether tugs can be gleeful, but it seems that the three McNally Construction tugs in Halifax were gleeful at noon time today when they completed placement of the last of the cribs at pier 6 in Halifax shipyard. 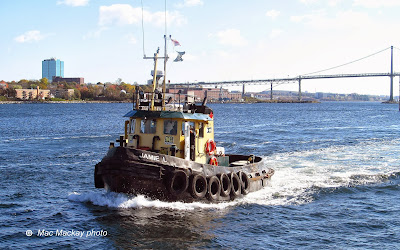 Freed from towing the huge concrete cribs at glacial speeds, and hours of nudging them into position, the tugs seemed to kick up their heels when the job was completed. The workers were also pleased to have the rest of the week end off too.

McNally Construction used three tugs to tow a concrete crib from the work site to the Fairview Cove container pier on Tuesday October 15. Bagotville took the lead, towing Oshawa, which was towing the crib. Jamie L brought up the rear pushing the crib for a time. As they neared the destination, Jamie L turned and repositioned as a brake to help position the crib. 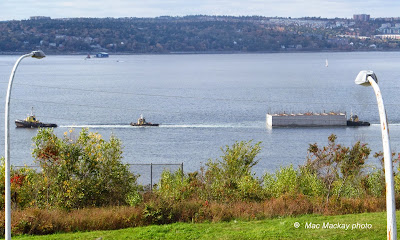 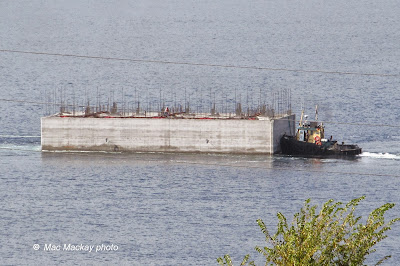 [Power lines in the foreground  were unavoidable, due to a crime scene investigation underway closer to the water.]

The McKeil Marine barge fleet continues to grow.  An application has been made by McKeil-Malaspina Ltd for a coasting license to use the Tobias to carry a concrete batching plant at Bull Arm, NL for construction of the Hebron Gravity Base (GBS) structure from January to December 2014. Normally a "non-duty paid" vessel, under the Canadian flag, is a chartered one, where ownership remains with foreign owners. However it is reported that McKeil-Malaspina purchased this barge, so it is likely they assumed no other Canadian barge could do the job, and thus they are avoiding paying Canadian duty. It is common in the oil industry to do this, since highly specialized oil-field craft are not usually available in Canada. I suppose the reasoning is that a 20t/m2 capacity deck barge fits the same category. McKeil have commissioned two other barges from local builders, but these are not highly specialized.

Tobias is a flat deck barge Damen Stan-Pontoon type 12032. It was built in China and transported to Europe aboard the heavy lift ship Zhen Hua 29 and given final fit out at the Damen yard in Gorinchem, Netherlands. The number 12032 refers to its length of 102m x breadth of 32m.It reportedly has a sophisticated ballasting system and mooring winches, powered by its own generators. With the aforementioned 20t/m2 deck load capacity, it has a capacity of 20,000 tonnes. Its gross tonnage is 8800 and it was registered in St.John's May 9 of this year.

It was towed to Canada by the Dutch tug En Avant 10 operated by Muller, Dordrecht arriving in Pictou in July. It is now being fitted out at the Aecon-Fabco shipyard. 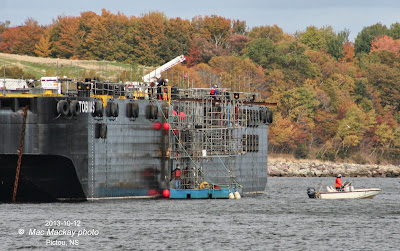 The tug En Avant 10 was built in 2002 by Ast. Armon in Vigo, Spain as Dhoce and later carried the name Tryton while working in Poland.
The tug is powered by Cat main engines, giving 4400 bhp and 55 tonne bollard pull. It is rated for ocean towing, salvage, fire fighting and harbour work.

It is now en route for Argentia, NL with another new barge for McKeil-Mammoet, named Glovertown Spirit. Also built by Damen, it measures 71.28m x 23.5m and 2073 gross tons. Registered in Canada on October 1, it is due in Argentia October 22. nb: destination changed to Bay Roberts (revised 2013-10-15) 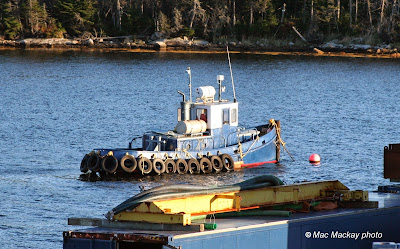 No holiday for Gulf Spray

It was the Thanksgiving holiday weekend for some, but not Gulf Spray and its crew. The hard working little tug handles waste disposal work for cruise ships and is on the go nearly every day during the height of the cruise season. 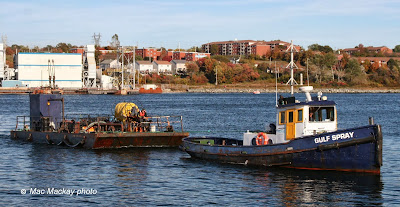 Gulf Spray can be seen towing a tanker scow or a flat deck scow, that carries a variety of waste containers, and a forklift. 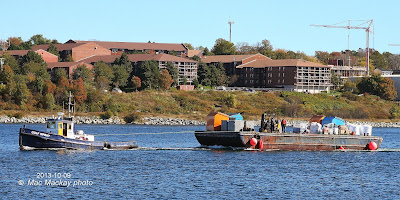 2. Gulf Spray and a solid waste scow in the Narrows on October 9.

Gulf Spray qualifies as a classic, since it was built in 1959 by Ferguson Industries in Pictou, NS for use in the shipyard. It was built to a similar pattern to tugs built for the Minister of Public Works.It received an extensive rebuild in 2007. 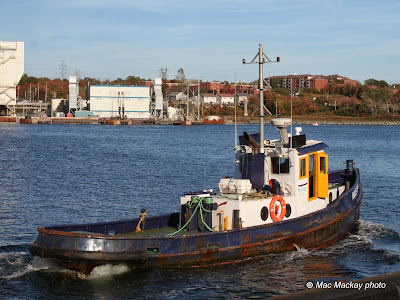 3. After a particularly neat bit of boat handling, Gulf Spray is finished for the day and returns to her berth.

The tug is usually operated by one man only, with another one or two the scow. A third man uses the outboard powered Harbour Runner to say ahead of the tug and assist with tying up the scow once it reaches the pier 9B base or bringing it alongside the cruise ships. 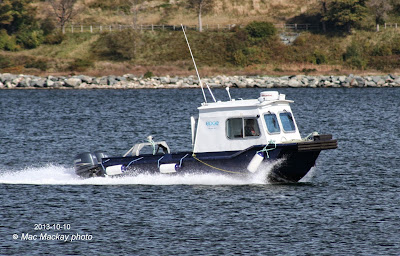 1. As the large tugs Atlantic Oak and Atlantic Hemlock head back to base, they pass Oshawa towing Jamile L towing a concrete crib.

A tandem tow usually refers to one tug towing two ships, but in Halifax, it seems to mean two tugs towing one object. McNally Construction has the job of building large concrete cribs that form the pier face of the new pier 6 at Halifax Shipyard. In order to move the cribs from their construction site to the shipyard, they are using two tugs, Jamie L and Oshawa as shown here before.

3. Oshawa is really digging in and her engines are running at full revs. 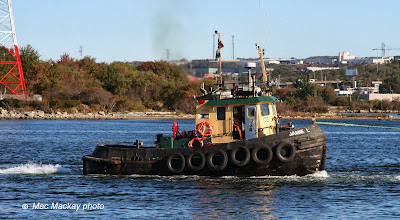 4. Jamie L is also running with the pedal to the metal and setting up a bit of a rooster tail.

The advantage of using two tugs is that once at the pier 6 site Oshawa peels off and gets into position to place the crib. Once located, the  crib is "gentled" into place using a system of wires and come-alongs and then sunk in place. 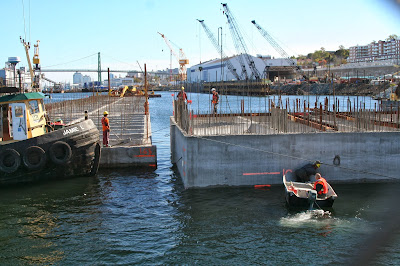 5. The crib is moved the last few feet into position with wires. The motorboat is allowing a man to install a sleeve in the sidewall which will allow water in for sinking.

Atlantic Hemlock back in Halifax

Atlantic Towing's Atlantic Hemlock is back in Halifax for a short stint. It is presently covering for Atlantic Willow which has gone to Shelburne for routine maintenance and drydocking.

1. Atlantic Hemlock moves around the stern of the Zim California to assist it into the Halterm container terminal this afternoon. Ships berth starboard side to at the pier and must be turned 180 degrees as they arrive, and back in alongside. Tugs assist the turn by pushing on the starboard quarter at first, then when the ship is at about 90 degrees to the pier they move around the port quarter to push it alongside.

This is a familiar role for Hemlock which acts as a bit of a rover in ATL fleet, moving around to the various ports as needed from its base in Saint John, NB.
Posted by Mac at 9:05 PM No comments: