As spring moves into summer and warm weather arrives, it is not surprising that Halifax tug owners are joining home owners in getting out the scrapers and paint brushes.

Acquired in July 2018 from Tidewater, Horizon Enabler, the former Tidewater Enabler, continued to carry the colours of previous owners. The ship tied up at Pier 9B May 27 after returning from a large cable laying project in Greenland waters. After unloading the cable laying gear at IT International Telecom crews got busy on the starboard (sunny) side of the ship. 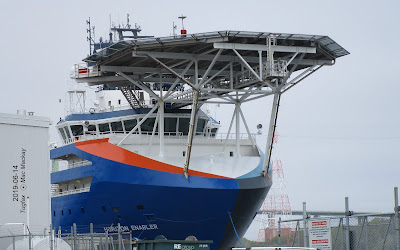 The ship's transom has been re-instated after the cable work, and will be readied for repainting.This afternoon the ship will move to The Cove in Dartmouth where it will berth to allow the workers to move to the port side. 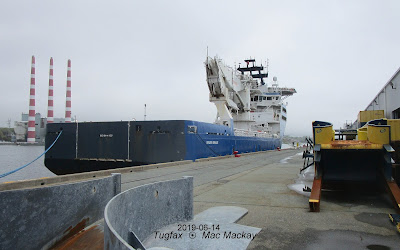 Cable slides have been removed and the "tail gate" reinstalled.

Further along at Pier 9C the well known Gulf Spray is celebrating its sixtieth birthday with a serious shave and haircut. Built by Ferguson Industries Ltd in Pictou to its own account in 1959, the tug had
a major rebuild in about 2007. After severe damage in a storm in 2014, repairs were made, but they did not restore the tug to its previous yacht like appearance. 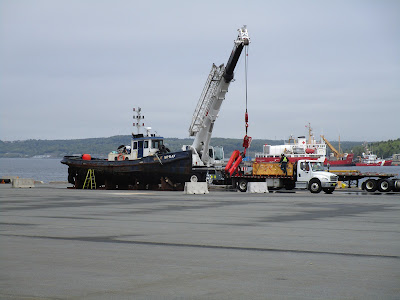 The tug's hull has acquired a large crop of marine growth over the winter.

Now up on the dock, the tug is being readied for another season of barge handling. The barges are used to remove waste and recyclables from cruise ships. The international garbage it is not allowed to enter the domestic "waste stream" and it thus landed ashore and transferred to a special incinerator at the international airport.

Even at 60 years of age this tug still performs useful work, and certainly raises an admiring glance from tug aficionados when it is seen hard at work.

With construction of the southend container pier extension moving into the second phase, McNally International Inc has mobilized additional plant for the work.

Phase 1 dredging started in January and was completed by May 22. The crane barge Derrick No.4 conducted the dredging using the dump scows S.11 and S.12. The tug Mister Joe was on hand for the start of the work, and the smaller tugs Oshawa and J.F. Whelan carried through.

There is now the rock mattress to place, using the dump scows to transfer the material from pier 9C to pier 42.

The second phase is to build concrete caissons that will form the base of the new pier. McNally has brought in two more barges, the Idus Atwell, equipped with a crane and the semi-submersible barge Beaver Neptune as a construction platform for the caissons. There have also been numerous sectional scow components of the Argonyn class. McNally has ten of these 50 ft x 9 ft truckable units that can be linked together in various configurations to form a single floating platform.

The barge Idus Atwell had to be towed from Point Anne, ON (near Belleville) to Halifax, a ten day trip assigned to to  the veteran tug Sandra Mary. Built in 1962 as hull number 1205 by Russel Brothers in Owen Sound, ON, its original name was Flo Cooper when it was built for C.A.Pitts Construction. McNally acquired and renamed the 900 bhp tug in 2000. In 1993 its registration was transferred to Charlottetown, PE when it was working on the Confederation Bridge project. 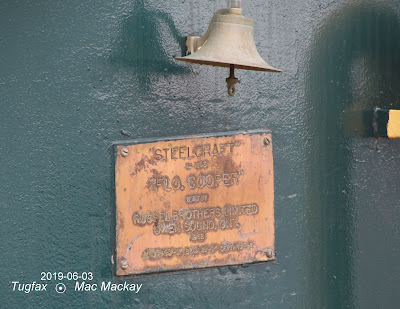 It is similar in design to another McNally tug, Mister Joe built in 1964. The latter was re-assigned from Phase 1 work earlier this spring and is no longer in Halifax. In fact AIS signals say that it is in Lake Champlain. This I find hard to believe, so will await other reports.

After arriving in Halifax May 18, Sandra Mary sailed on May 25 for Point Tupper, presumably towing Oshawa and returned with the Beaver Neptune and the tug Whitby. Built in 1978 at the port of the same name by original owners McNamara Construction, it is rated at 475 bhp. 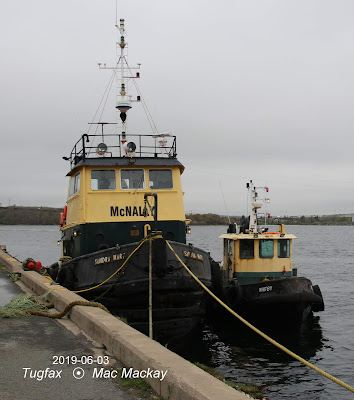 Sandra Mary and Whitby tied up at pier 9 between assignments.

All of these tugs have worked in Halifax on many projects over the years, and it is always interesting to see them again. 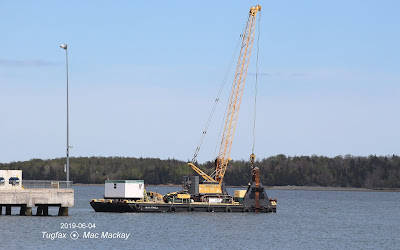 Idus Atwell set up just off the end of pier 42 for placement of the rock mattress.
(McNally built the extension in 2013.)