Each year the ABR Company then publishes the International Tug + OSV Annual Review. It is very highly regarded in the tug and OSV sector as it highlights new vessels built during the past year all over the world. The 2018 version, just out, features thirty some vessels in great detail, describing the features and facts, with a high quality colour photo, and most fascinating to me,  general arrangement drawings. These usually include a couple of deck plans and a profile.

This edition covers 105 vessels, with about 35 detailed accounts and the rest in capsule form with descriptions and photo.

Each year the review covers the newest developments in tug design, whether it is hull form or configuration or propulsion arrangement. This year several trends that have been in the making for some time are finally embodied in actual ships and it is fascinating to see how the various designers and shipyards have developed the concepts. Tugs and OSVs from all continents are covered. As expected Europe is covered widely, but so is North and South America, the Pacific and Asia, including the newly developing tug industry in Indonesia. 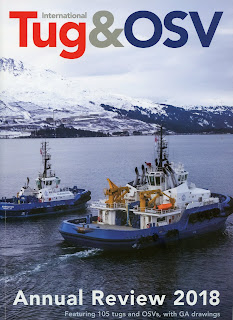 The cover photo of this year's Review features two tugs built to work in Prince William Sound, AK for Alyeska Pipeline Service Co. Edison Chouest Offshore operates the general purpose tug Elrington (left) and the mammoth escort tug Commander (the first of five for this contract). With 12,334 bhp and a 142 tonne bollard pull, the Commander has a free running speed of 15 knots. It also carries a suite of oil spill response gear and extensive fire fighting equipment.


The advent of LNG fuel figures into some of the new builds.  There have also been more developments of the arrangement of propulsion units, whether ASD type thrusters or Voith Schneider. The first new build carousel tug is also featured, with its revolutionary ring mounted winch. Particularly for escort functions, the latest designs produce incredible power, generally in fairly small tugs. There is also tremendous development in northern regions and numerous ice class tugs have been delivered in the past year.

Not to be left out, and despite dire conditions in the oil patch, new OSVs are still coming out, many for highly specialized jobs, but they are also diversifying, particularly to work on offshore wind farms. Many of these vessels are equipped for 'walk to work', which allows safe transfer of workers from ship to offshore installation without using cranes and helicopters. Dynamic positioning of the ship and deployable gangways make servicing the offshore installations safe and convenient. 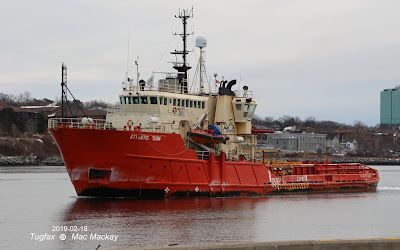 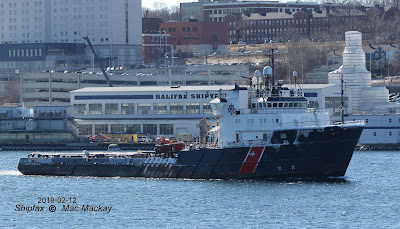 Burin Sea makes its way toward Bedford Basin for DP trials this morning.
It sports a little frozen spray, picked up on its way in from Sable Island.

The tug/supplier Burin Sea is still in service when many boats of its type have long since been relegated to the scrap heap. Its story, and that of sister vessel Trinity Sea has been told here before, but here is a capsule history.


The boats were originally built for the USSR by Stocznia Szczcinska im A Warskiego in Szczecin (Stettin), Poland in 1983. Burin Sea was named Neftegaz I and Trinty Sea was Neftegaz 2. With the democratic transition in Poland and dissolution of the USSR in the late 1980s there were major changes in the oil and gas industry there and the two ships were laid up. Secunda Marine Services bought both at a very good price. (They also acquired a third unit, Neftegaz 14, which arrived under its own power, and became Panuke Sea, and a fourth unit, Neftegaz 29 that was never converted.)

Secunda's own tug Magdalen Sea towed the pair from Norway, arriving in Halifax May 18,1998. 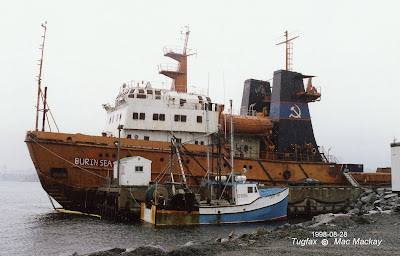 Soon after arrival in Canada, the boat's new name was painted on the bow. The hammer and sickle of the USSR was still displayed on the funnels, but was not to remain long.

After considerable demolition work, Ectug's Point Carroll towed the hull to the Verreault shipyard in Méchins, QC for hull work in July and back to Halifax in September. 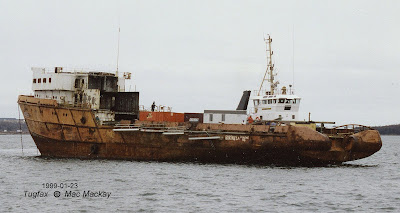 The harbour tug Point Halifax assists in setting up the tow to the shipyard for hull work.

Rebuilding was completed by November of 1999. That rebuilding was extensive, and resulted in a very different looking superstructure. However the ice class 1A hull, which was apparently made of very high quality steel, and its original Sulzer engines (producing about 10,000 bhp, delivered to two controllable pitch props) were the reason that it was worth the investment. 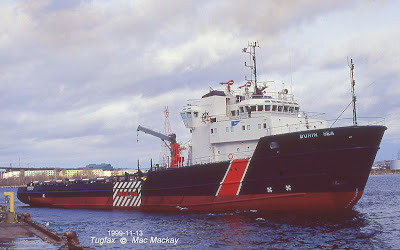 Fresh from rebuilding the boat sets out on sea trials in November 1999.

Now, nearly twenty years later, both boats are still in service shuttling between Halifax and the Exxon-Mobil gas field off Sable Island. That installation is being decommissioned and removed, so the boats will be working on that project for some time to come.

Quebec tugs are particularly busy this winter as much of the St.Lawrence is choked with ice. To get an idea of what some of the tugs are doing, there is an excellent webcam, playing live 24 hours a day, right above the Port of Quebec tug and pilot dock. It looks out over the St.Lawrence as far as the Lévis shore and refinery.

In winter, the harbour tugs also serve as pilot boats, and the pilot station is out in the stream directly off the dock. Ships exchange pilots from the lower river (they boarded at Escoumins) for pilots that will berth ships in the Port of Quebec or take the ships up river as far as Trois-Rivières.

The webcam which broadcasts on YouTube at https://www.webcamtaxi.com/en/canada/quebec/city-port.html   has extremely high resolution and is amazingly clear at night. The famous Quebec City skyline forms the backdrop and is lit up spectacularly. The ferries are crossing regularly and icebreakers make their way back and forth in addition to the commercial traffic of container ships, bulkers and tankers. Then there is the ice as it moves up or downstream with the tide, leaving open patches, then closing up again. 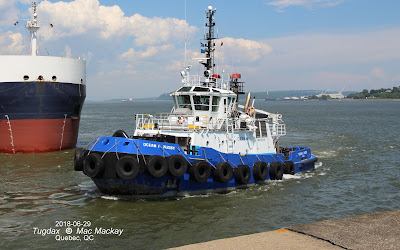 The Quebec City tugs are fitted with boarding gangways atop the deck house. This keeps pilots well clear of  ice.


This winter there were five tugs working in Quebec City. Océan K. Rusby is usually the dedicated pilot tug, but all are equipped for this service if needed. However the biggest tug, Océan Tundra has been sent to Matane to keep the ice from clogging the harbour there to allow the train and passenger ferries to run.

Three of the remaining tugs are ASD stern drives, but one, Océan Charlie is twin screw and usually in reserve. However it has been called out several times in recent days, both for pilot and ship docking duties. 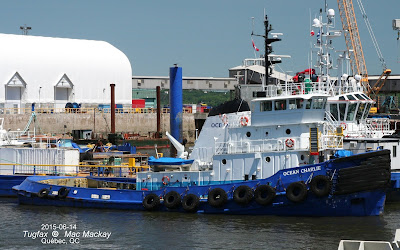 Océan Charlie was built in 1973 and is a 3900 bhp twin screw.
Its boarding gangway is painted with yellow railings.
(The YouTube camera may be mounted on the pole above the white shed in background.)


Toggling back and forth between the YouTube video and an AIS display, you can keep track of which tugs and which ships are in view. And if you missed something, you can "rewind" the video by four hours to catch up.

Groupe Océan tugs are busy in other places too and ice has been a big issue this winter, frequently stalling traffic trying to reach Sorel and Montreal.

The tug Océan Bravo has been called away from its usual spot in Trois-Rivières and Duga from Sorel is filling in. It was dispatched to La Baie on the Saguenay River (also ice-filled) to assist the tug Fjord Saguenay. That tug damaged a thruster while docking the bulker Nord Montreal on January 26. It is now going to the Industrie Océan shipyard in Ile-aux-Coudres for repairs under escort on the Saguenay, but once into the St.Lawrence, under tow of Océan Bravo. Since Fjord Saguenay may be out of service for some time, another tug may be brought in. The RioTinto Alcan pier in La Baie is a busy spot, with too much traffic for just one tug, the Fjord Eternité. 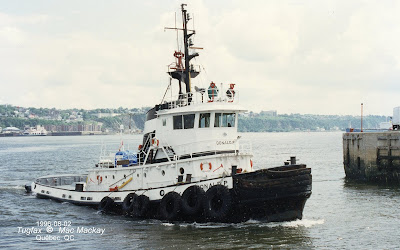 Built in 1970 as Takis V, renamed Donald P in 1973 then Océan Bravo in 1998, this is also a 3900 bhp twin screw tug, with what are now classic good looks.  Shown here in its very attractive Quetugs livery. At the time Quebec City was noted for its white tugs, white ferries and white fire trucks!
.