As reported last month Rio Tinto-Alcan has acquired the tug Stevns Icecap from Denmark for use at its terminal in La Baie, QC.
http://tugfaxblogspotcom.blogspot.com/2011/01/icecap-on-way-back.html

It has now been reported that the tug will be renamed Fjord Éternité and that it will arrive in Halifax on a semi-submersible ship.
No date has been set for the arrival yet, and the tug remains in layup in Svendborg, Denmark. Earlier reports suggested that the tug would be leaving Denmark at the end of February.

Belle D gets a nose job 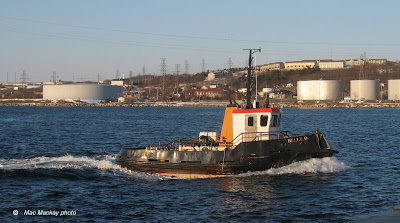 After many months of hard work, it appears that the small tug Belle D is having some work done on its nose. Forward bulwarks get knocked about quite a bit while handling barges, and it is likely that repairs were needed.
The tug was called out for some work in Bedford Basin over the weekend, and presented an odd appearance with a gap up forward.
Recent work for the tug included moving two restored cannons from pier 9 to Macnab's Island aboard the barge Halifax Carrier. The barge is owned by RMI Marine, who also operate the tug.
Posted by Mac at 8:44 AM No comments:

On the Hull Bollard 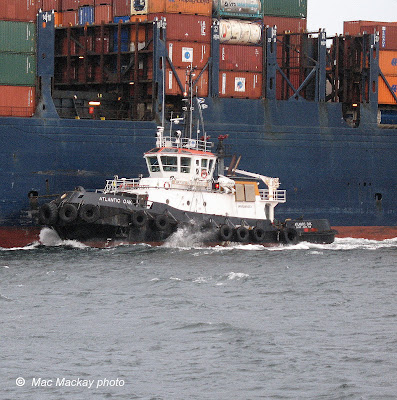 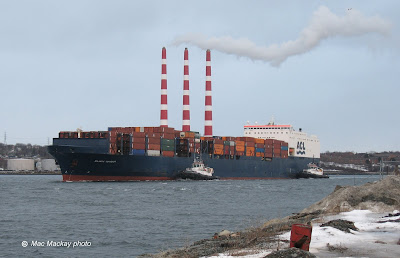 Most high sided ships are fitted with recessed hull bollards. This allows tugs to tie up without having to pass a line up to the ship's deck. Here Atlantic Oak has secured to a hull bollard on Atlantic Conveyor as the ship heads up through the Narrows to berth at Fairview Cove on Saturday February 19.
Fleet mate Atlantic Willow has made a similar connection further aft.
It requires considerable skill for the deckhand to pass a very stiff wire, out over the tug's side while the skipper keeps the tug in position alongside the moving ship. On a windy day, the deckie is likely to get doused with spray in the process. The tugs are fitted with headlights in their bulwark's forward to assist when this has to be done at night.
.
Posted by Mac at 10:22 AM 1 comment: 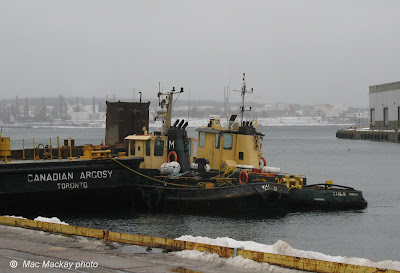 Sunday morning saw the tugs Whitby and Carl M at pier 24 with the dredge Canadian Argosy and the dump scow FDJV 2. A big blow the night before had called a halt to dredging operations off the Halterm container pier, and so it was a day for rest and repairs.
The two tugs are in 24 hour a day operation moving the dredge from position to position and taking the scow to the dump site. Whitby is the more powerful tug and it does most of the heavy work while Carl M shifts the empty scow, runs back and forth to shore and assists in dredge moves.
.
Posted by Mac at 10:09 AM No comments:

Another new tug for Quebec?

KST, the developers of the patented Rotor tug, have sold a "design package and technical details" for a model RT 110-37E tug to Groupe Océan of Quebec. Expected delivery is the end of 2012.

The Rotor tug, which is the brainchild of the tug operator Ton Kooren, is essentially a tug with three azimuthing drives. Two of the drives are mounted forward, like a tractor tug and one is mounted aft. The tugs give the performance and handling to meet or exceed that of a V-S tug, but using the simpler technology of the azimuthing drive.

Following the delivery of the first three RT tugs to Kooren's own tug company, Kotug, about twenty have been built, of various designs and are in use by different tug operators, primarily in Europe.

Although the idea has been somewhat slow to catch on, the undeniable benefits are there for the operator that needs the power, and breaking force, combined with extreme maneuverability.

The Océan tug is of a new design, and the particulars are as follows:

It seems likely that this tug would use three engines of similar size to those in its ASD 5,000 hp twin engine tugs. The similar technology and commonality of parts, etc., would be a distinct advantage to Océan.

This is a tanker escort tug, and will be available on the St.Lawrence River for large crude oil tankers, but also for gas tankers, when and if the gas port is built near Quebec City. The speed of 15 knots allows the tug to keep pace with the ship, and to provide the stern escort and braking forces necessary to stop or redirect very big ships.

There is no mention on KST's site about where the tug will be built, but it almost certainly will be at Océan's own shipyard, Industrie Océan at Ile-aux-Coudres, QC. That yard has just completed building two ASD tugs, and would be up to the challenge.

For more on Rotor tugs and KST - see their website: http://www.rotortug.com/scripts/homepage.php

There is also a section on this particular design, showing a model of the RT-110-37E: http://www.rotortug.com/scripts/developments.php