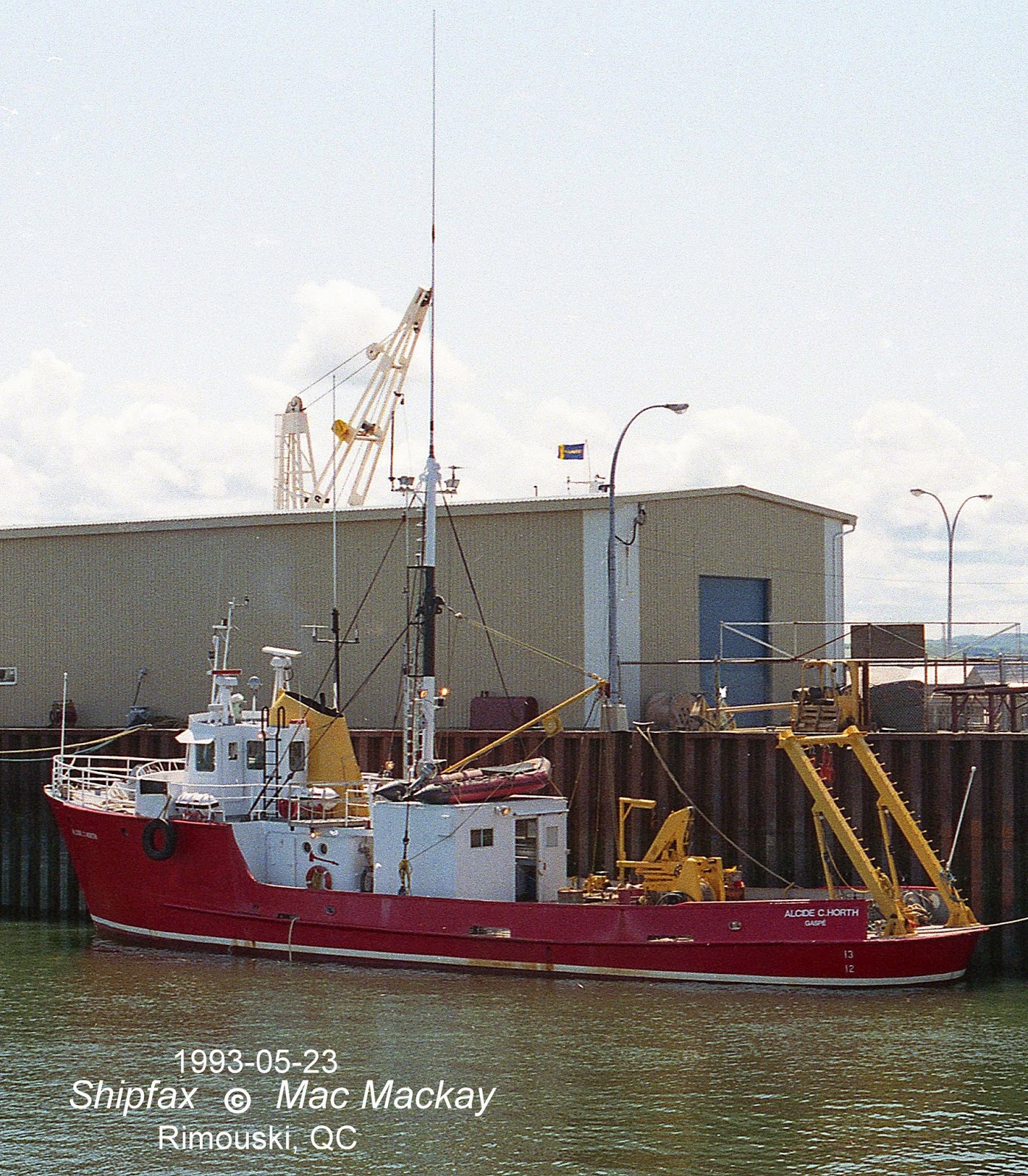 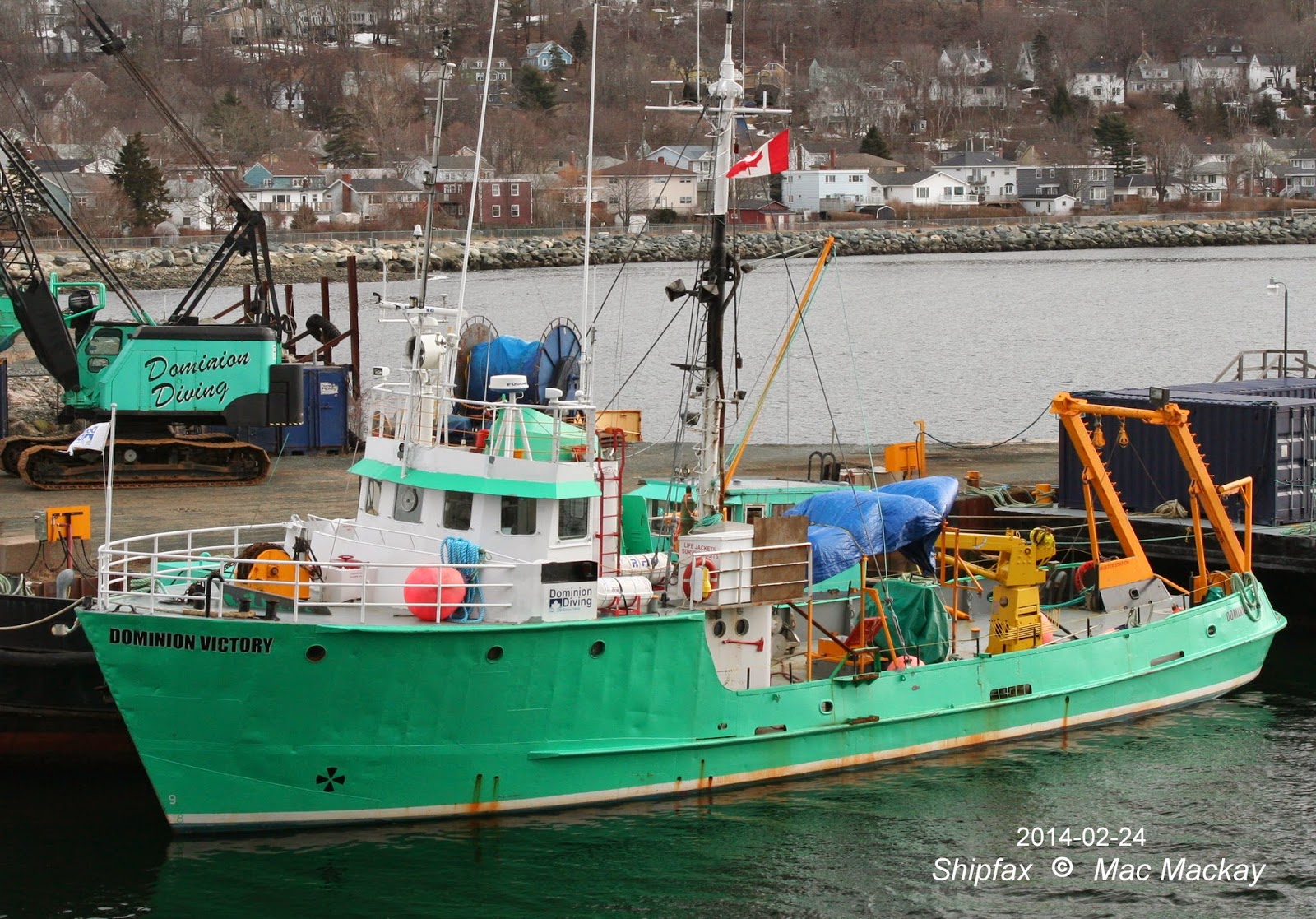 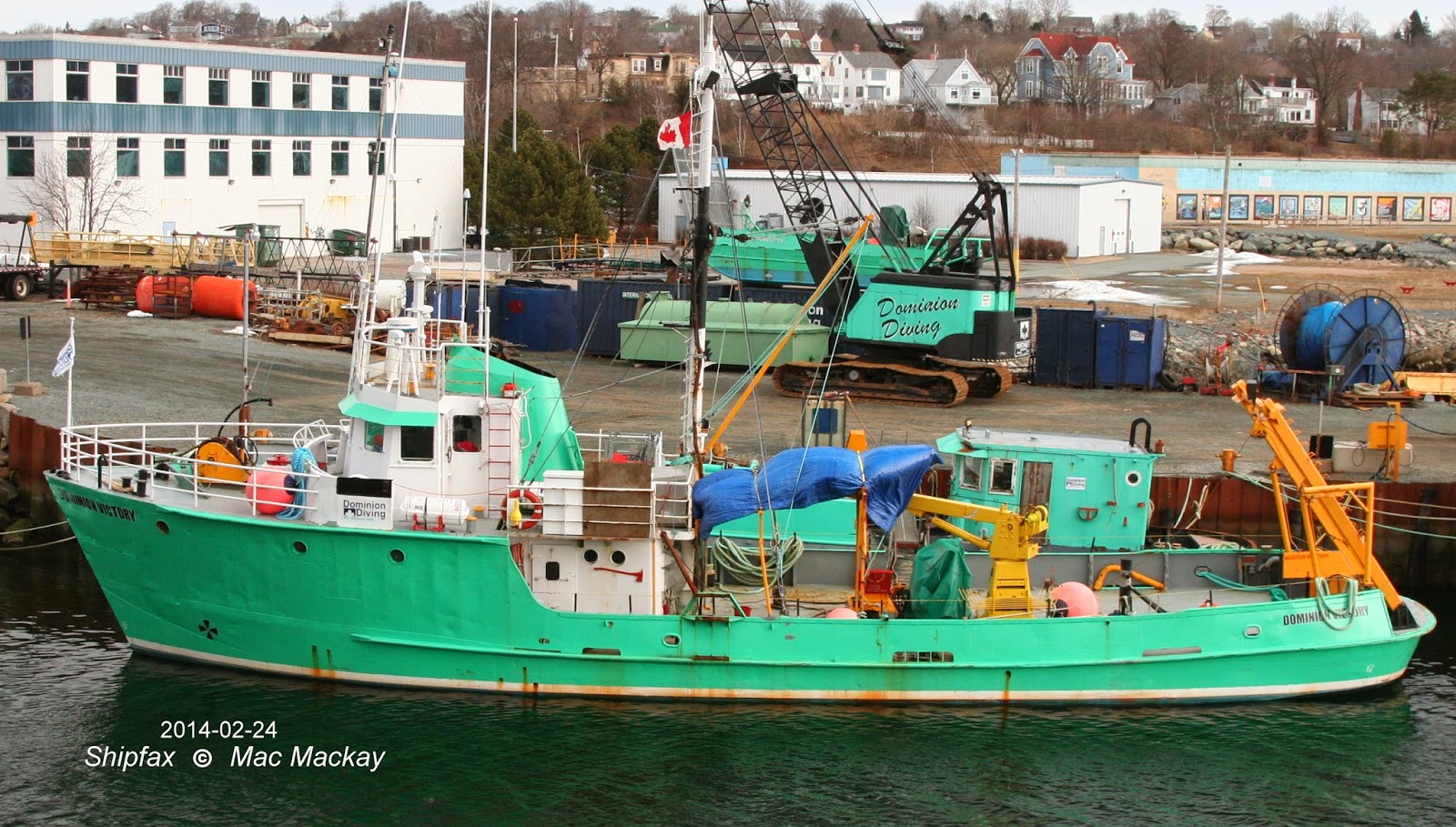 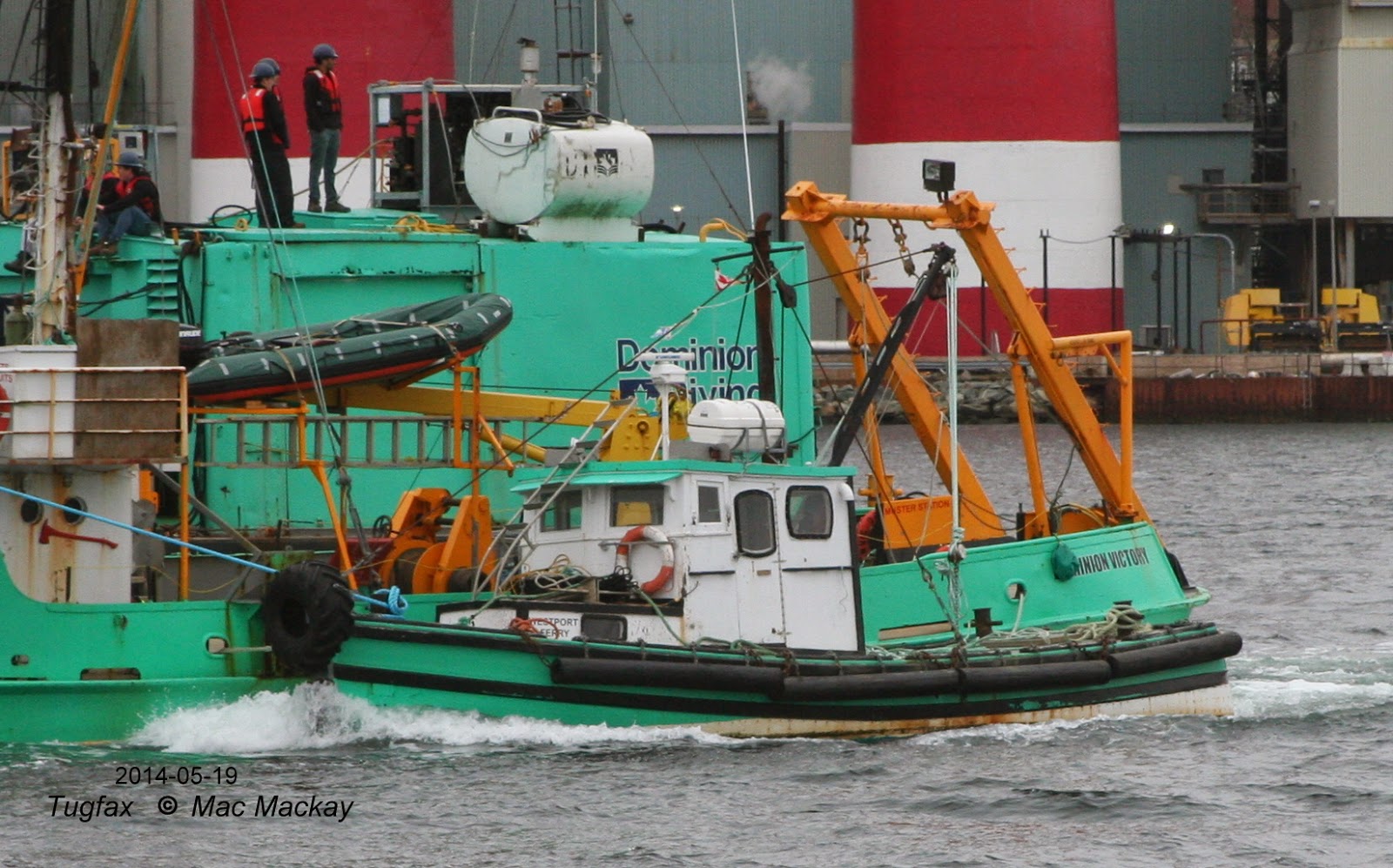 One of the stalwarts of Halifax  harbour, though perhaps little known, is the tug/workboat Westport Ferry . When  I photographed it last Monday, making its way through the Narrows, I was struck by how it has continued to serve its current owners for 35 years, but even when they acquired it, it had seen many years of service.

It owes its unusual name to the first owner who had it built by St.Marys Bay Industries Ltd in 1965 to operate as a ferry across the Grand Passage between Freeport, Long Island and Westport, Brier Island. Carrying passengers and light freight, it was replaced by a purpose built cable car ferry.

I first saw it in 1976, tied up at the Cable Wharf in Halifax. The corner of the wharf had been used by Smith's bum boat Nan and Greg and Walter Partridge's Atlantic Salvage. The boat still had its passenger cabin, and stout stem post, and must have looked much the same as it did when built. 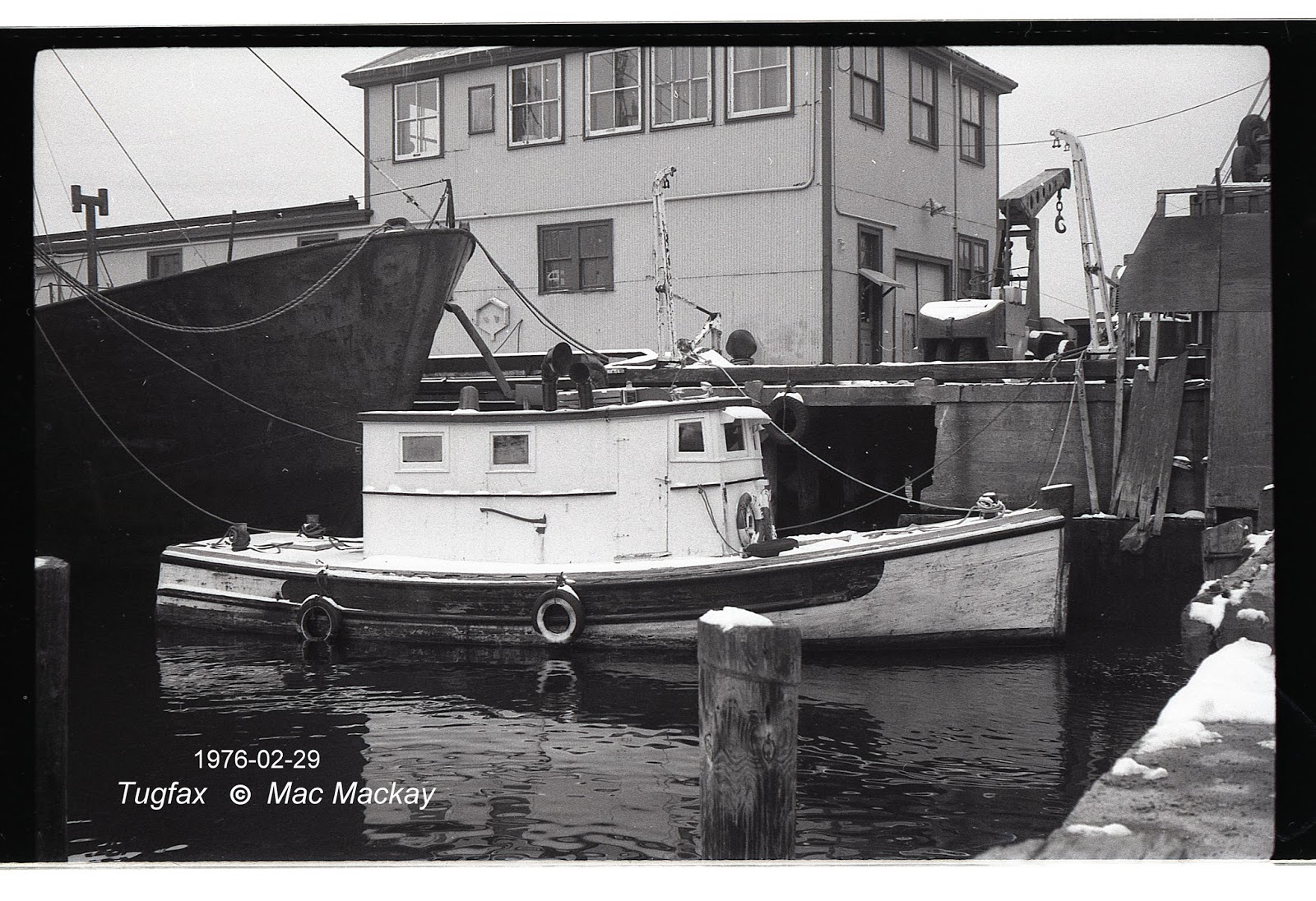 Atlantic Salvage's war-built draggers Calm and Drift, which were to be converted to salvage ships, (but were never completed) and the Cable Wharf  form the backdrop. 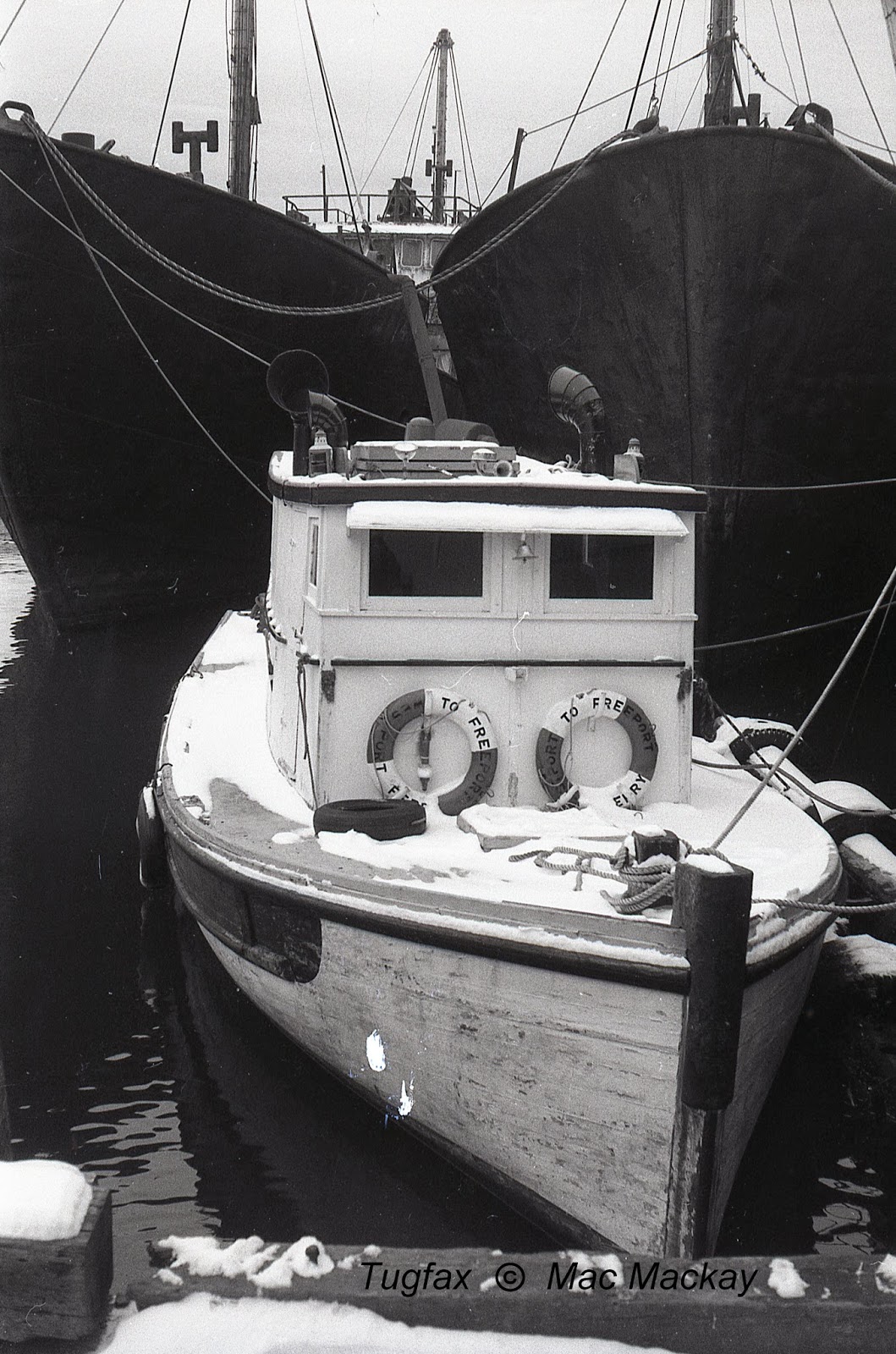 Acquired by Dominion Diving Ltd during 1978, the boat has served them ever since, undergoing several modifications over the years.  One noteworthy feature is its mast, which supports a cargo boom, but also doubles as an exhaust stack.Its passenger cabin was cut back to a smaller wheelhouse. 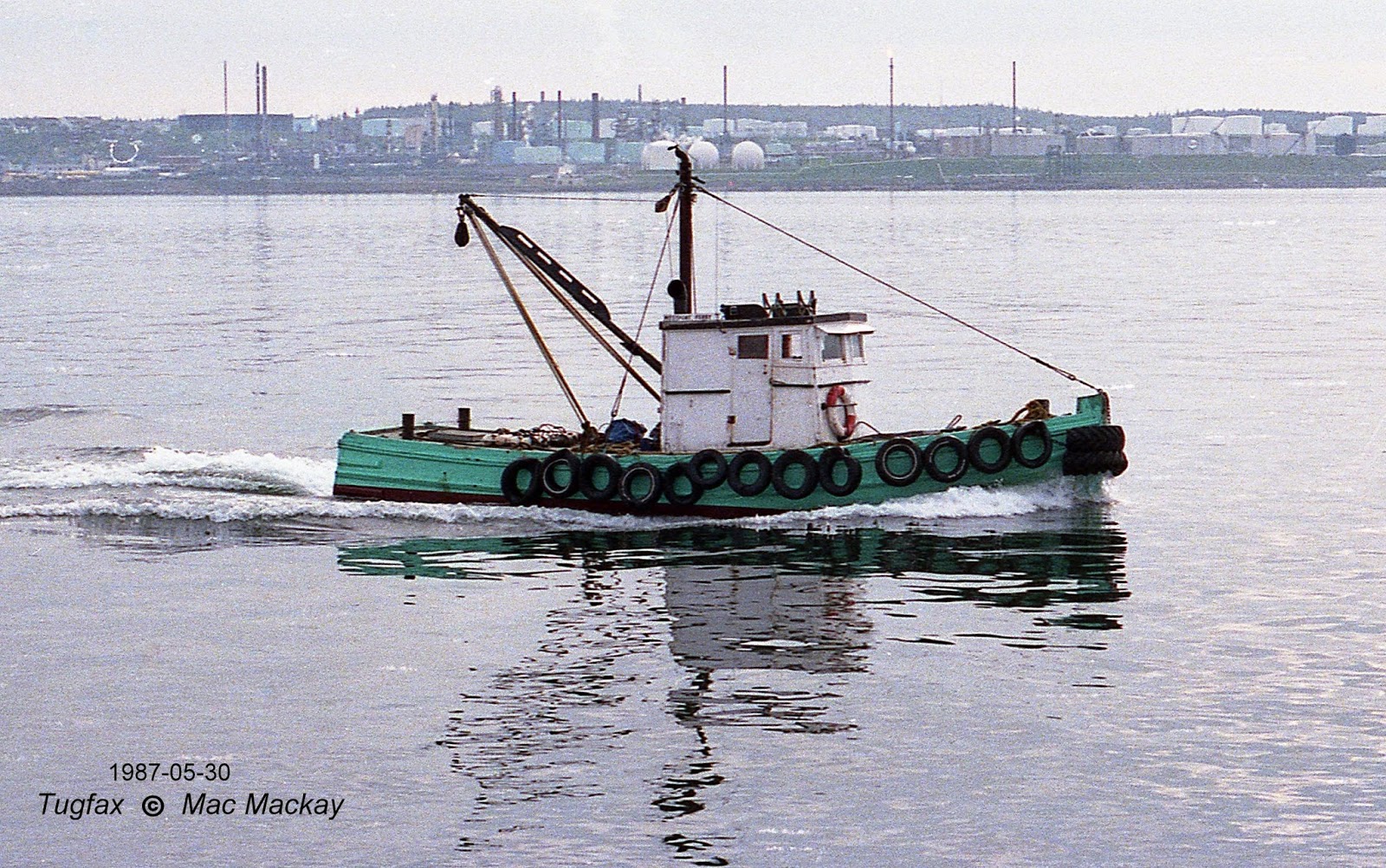 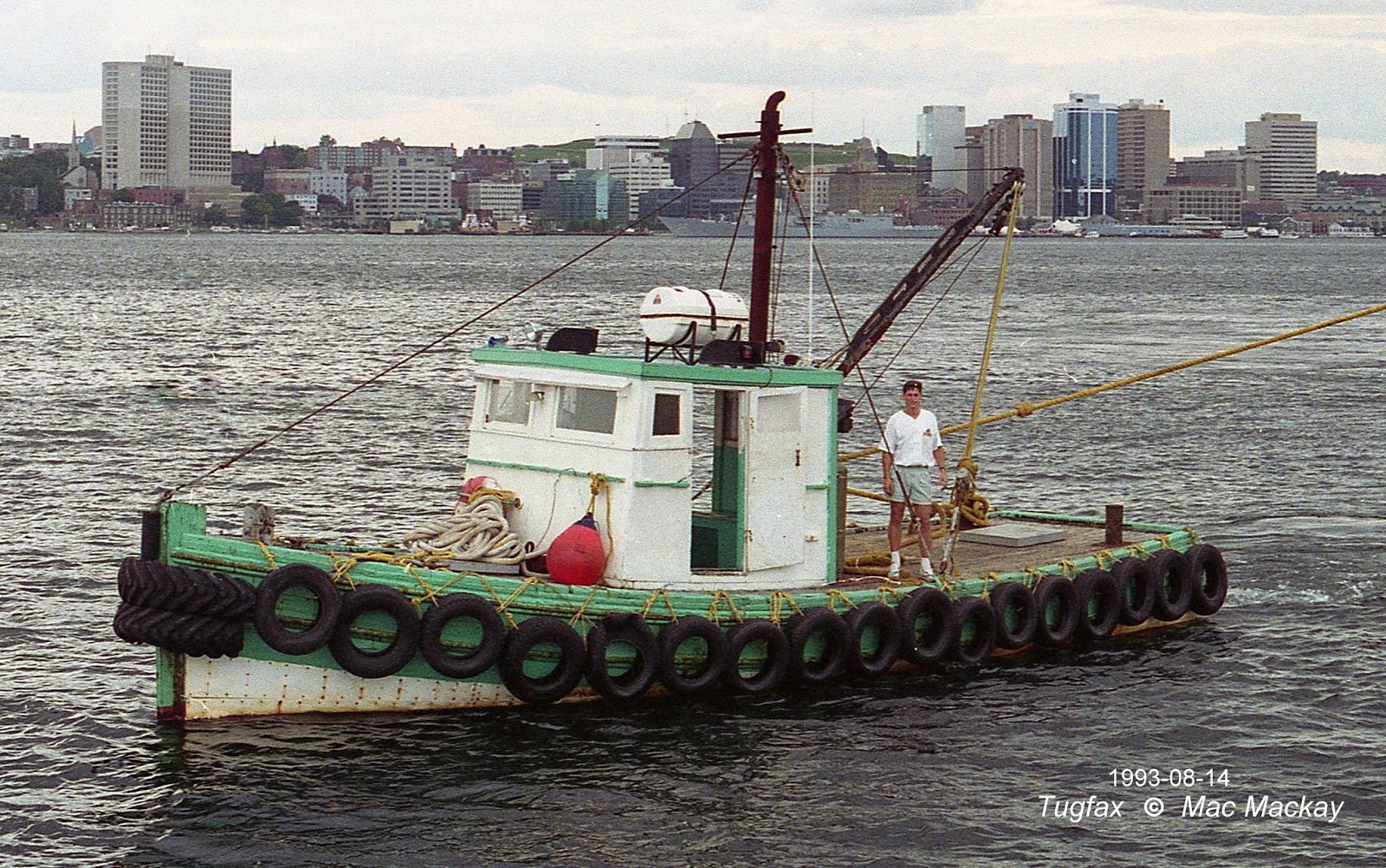 Seen in action in 1987 and 1993 Westport Ferry has a business-like look about it.

It still retains its original, but modified, deck house, and has acquired a raised deck over its forward cabin. Additional windows in the deck house improve visibility, but the heavily stayed mast/derrick/ funnel remains its distinguishing feature.Its hull has been sheathed and the multiple tires replaced by tubular fendering, and appears ready to continue service well into or past its 50th anniversary next year. 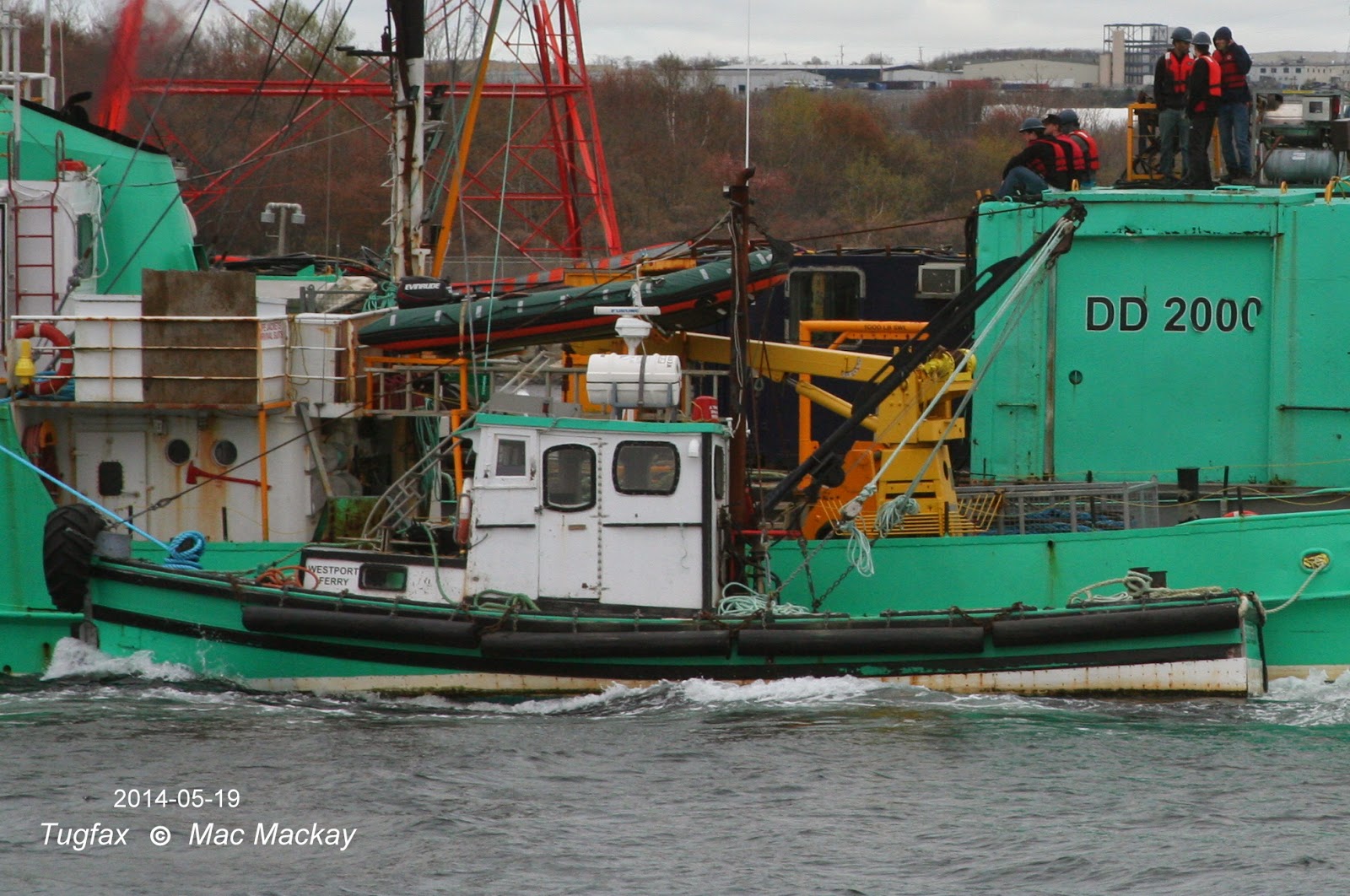 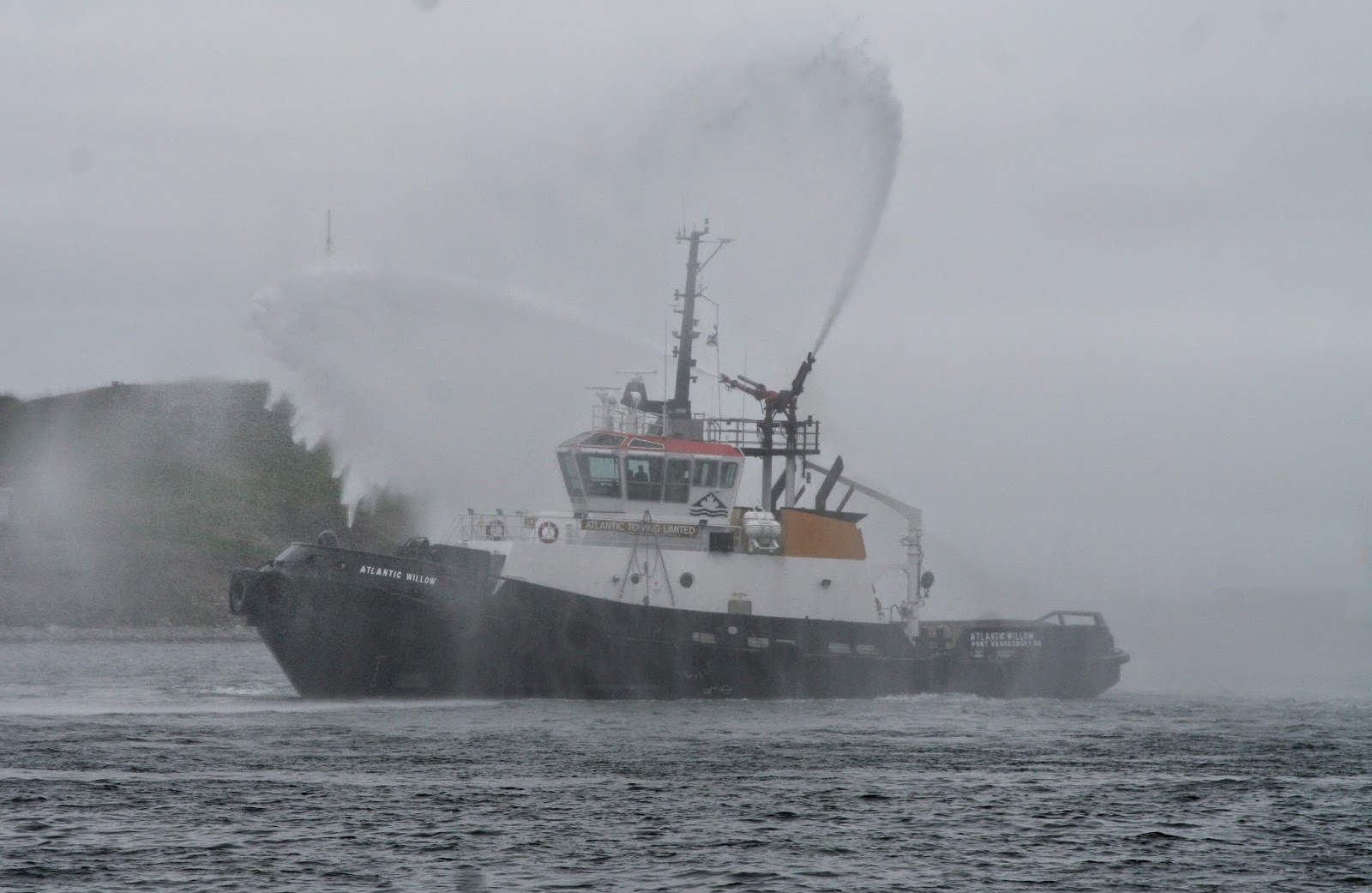 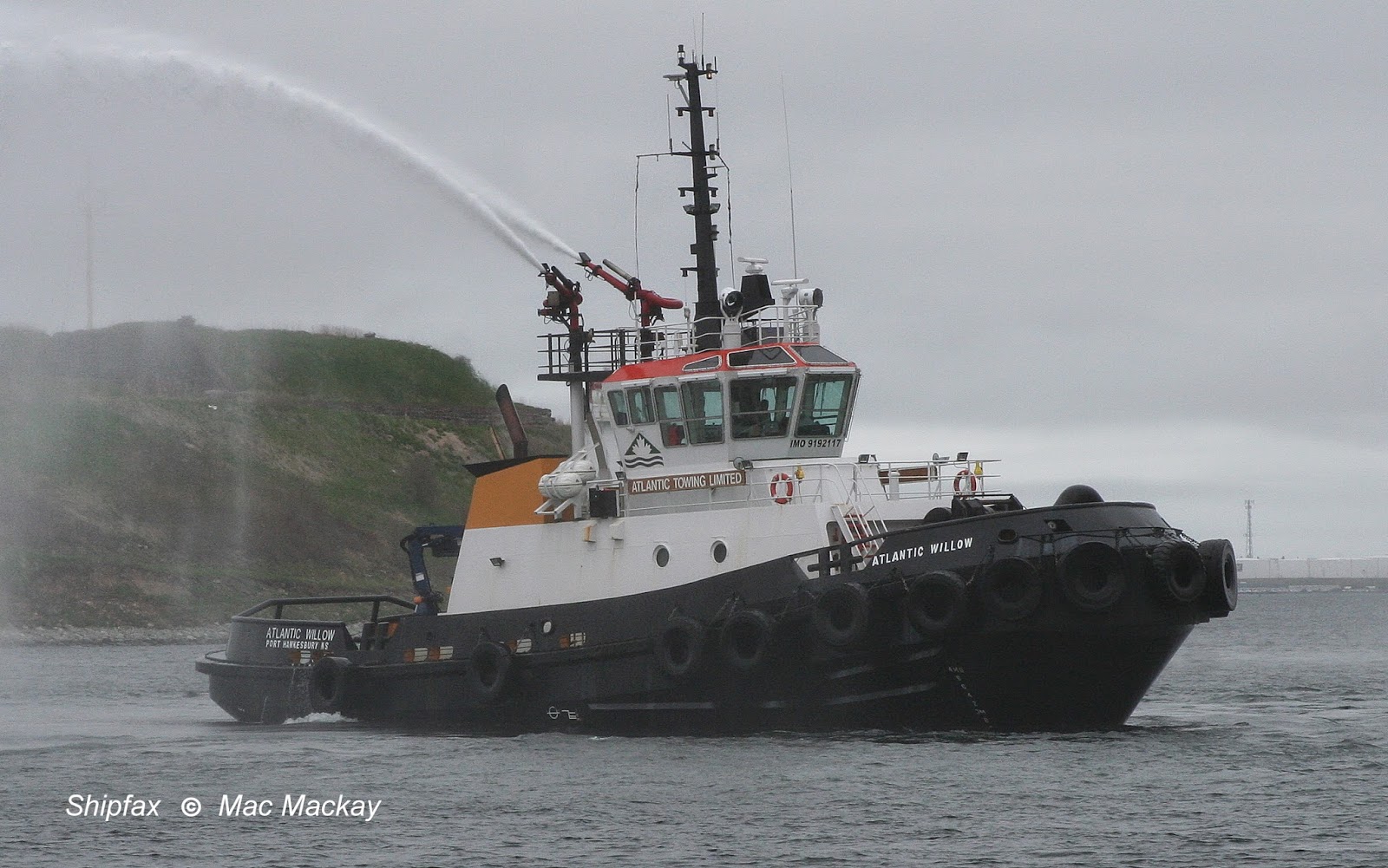 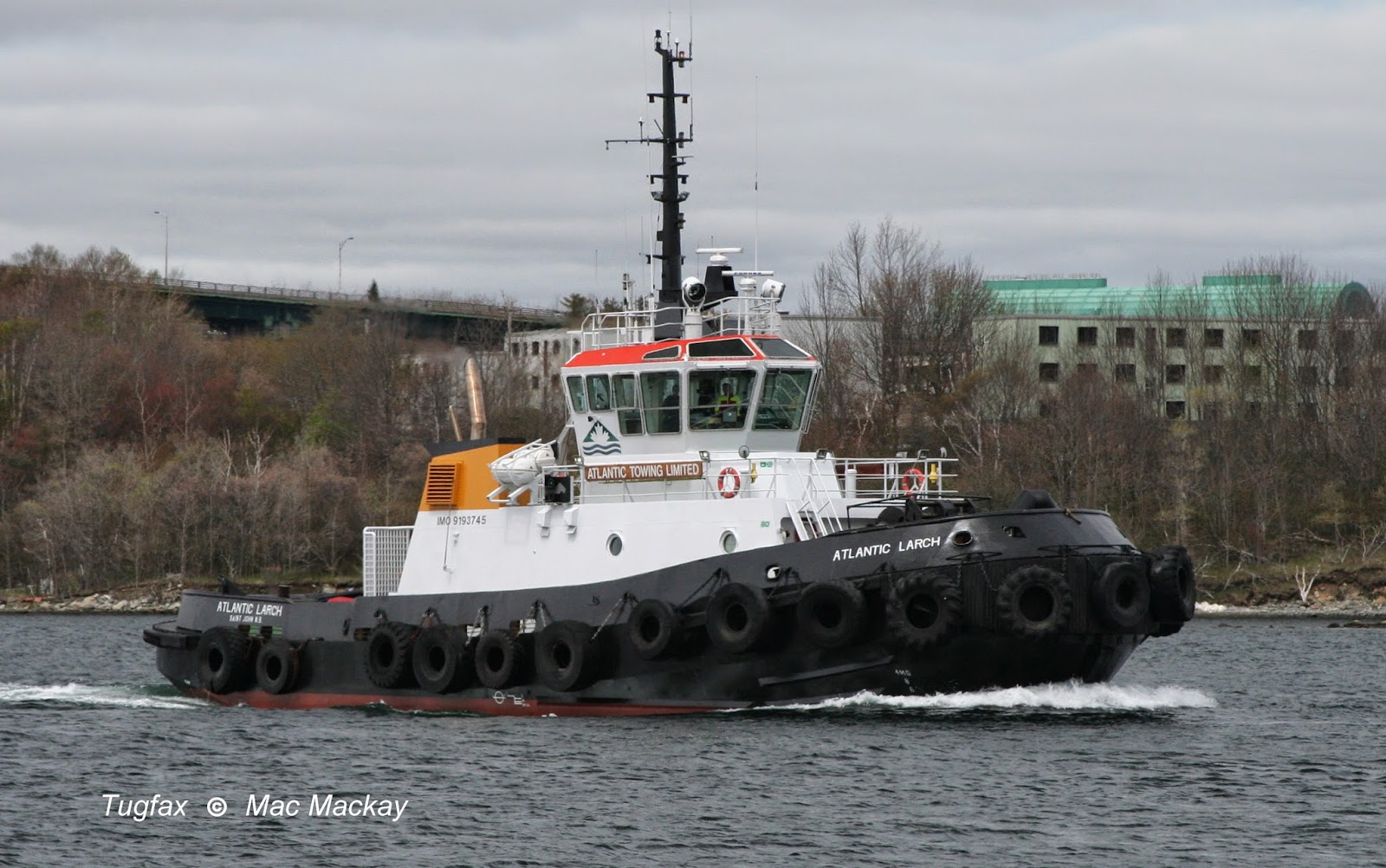 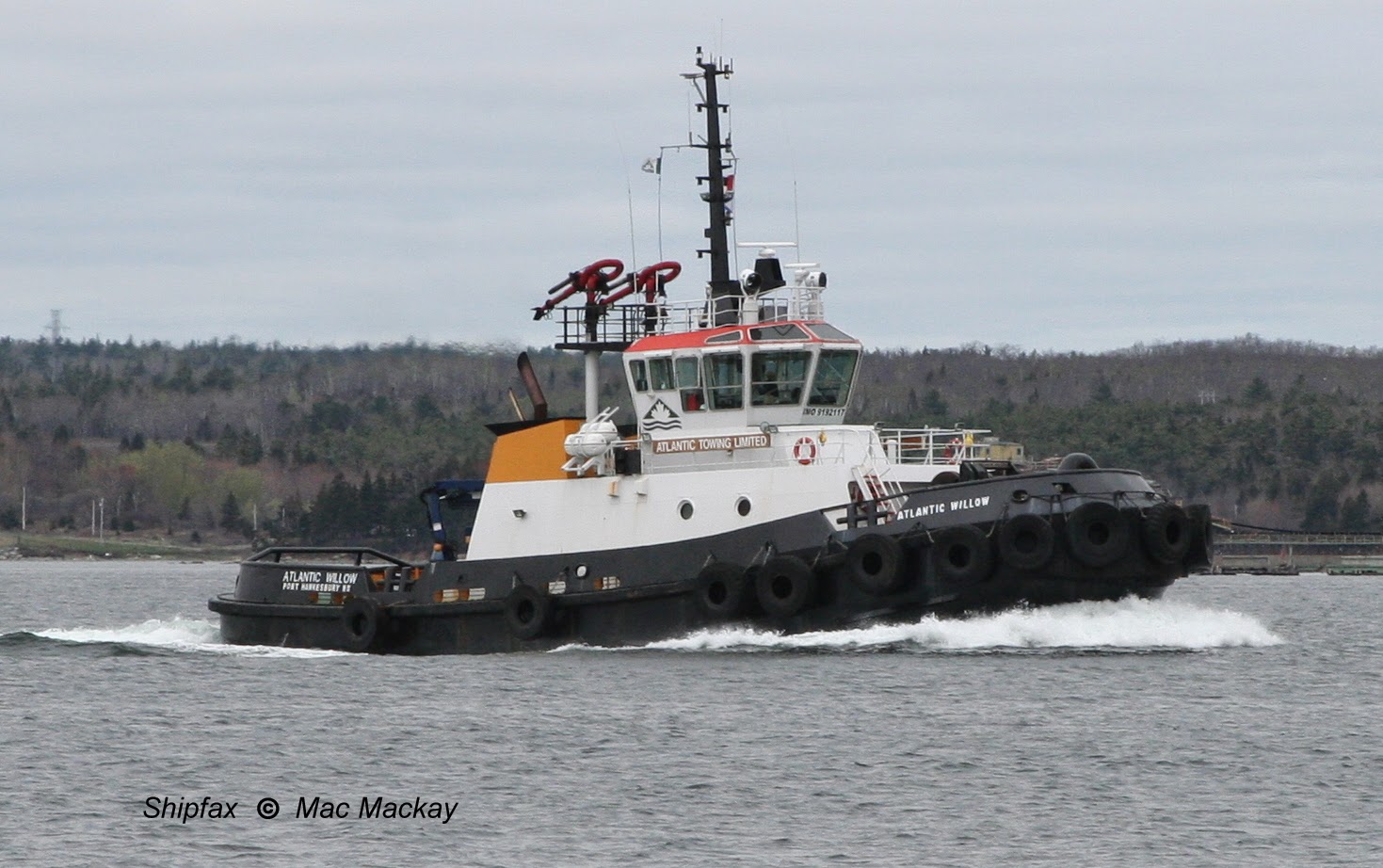 The annual Dominion Diving  work in Bedford Basin began this afternoon when the barge DD 2000 was moored in the #10 anchorage area. A small flotilla of DD tug/workboats towed the barge from Dartmouth Cove.. 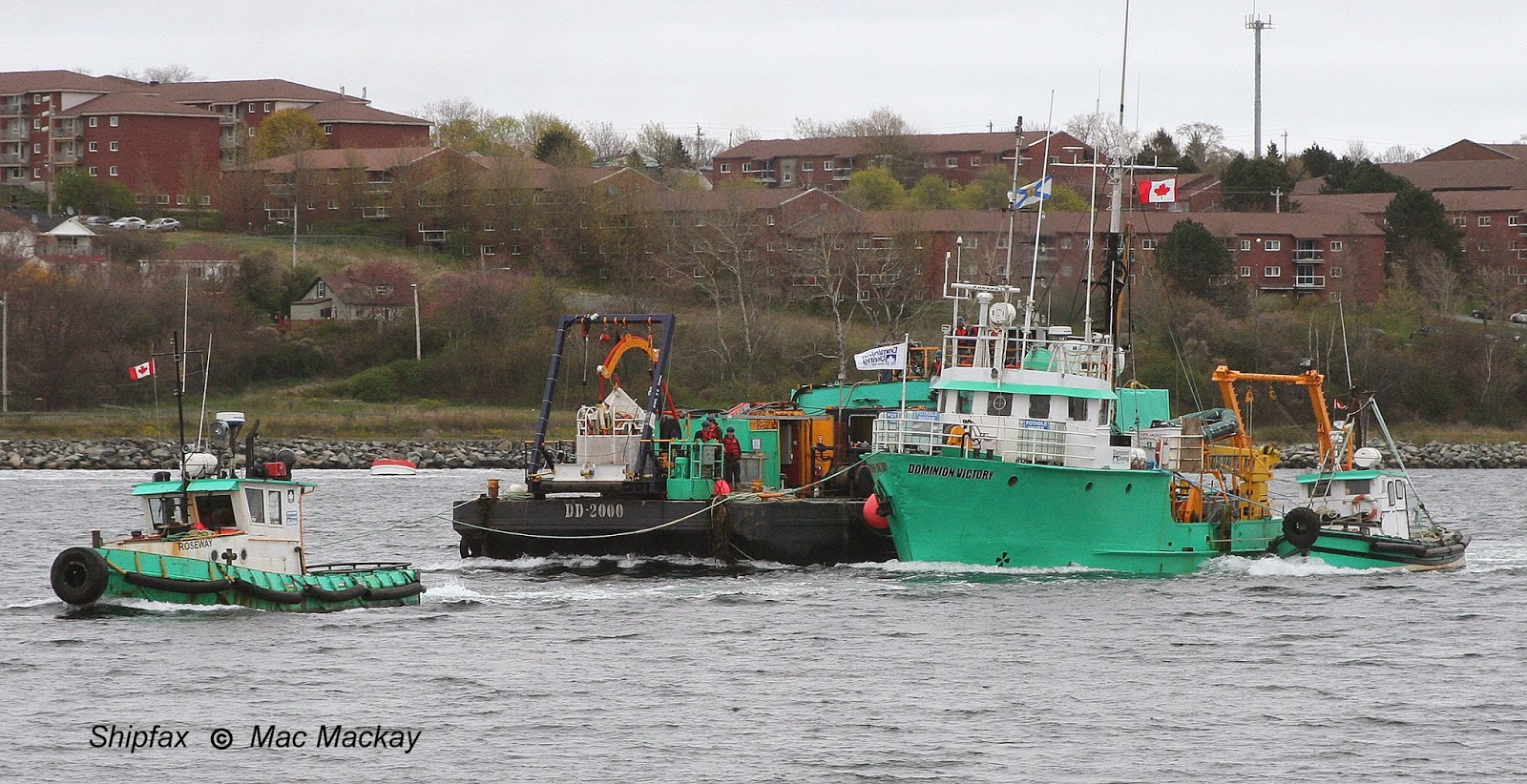 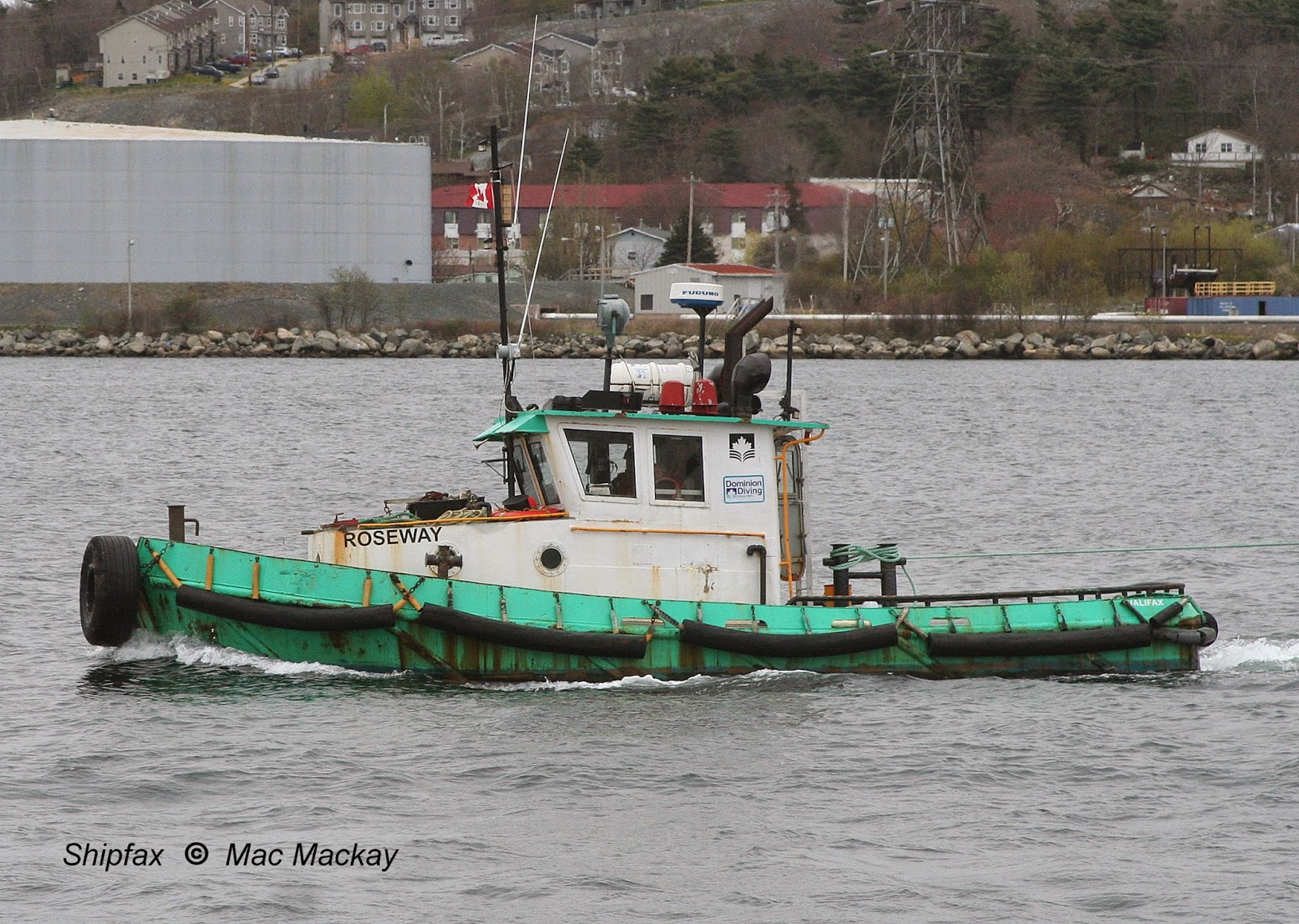 Leading the way is the twin screw tug Roseway , rolling a bit in the wake of a passing powerboat. It's work was completed when the barge was safely moored. 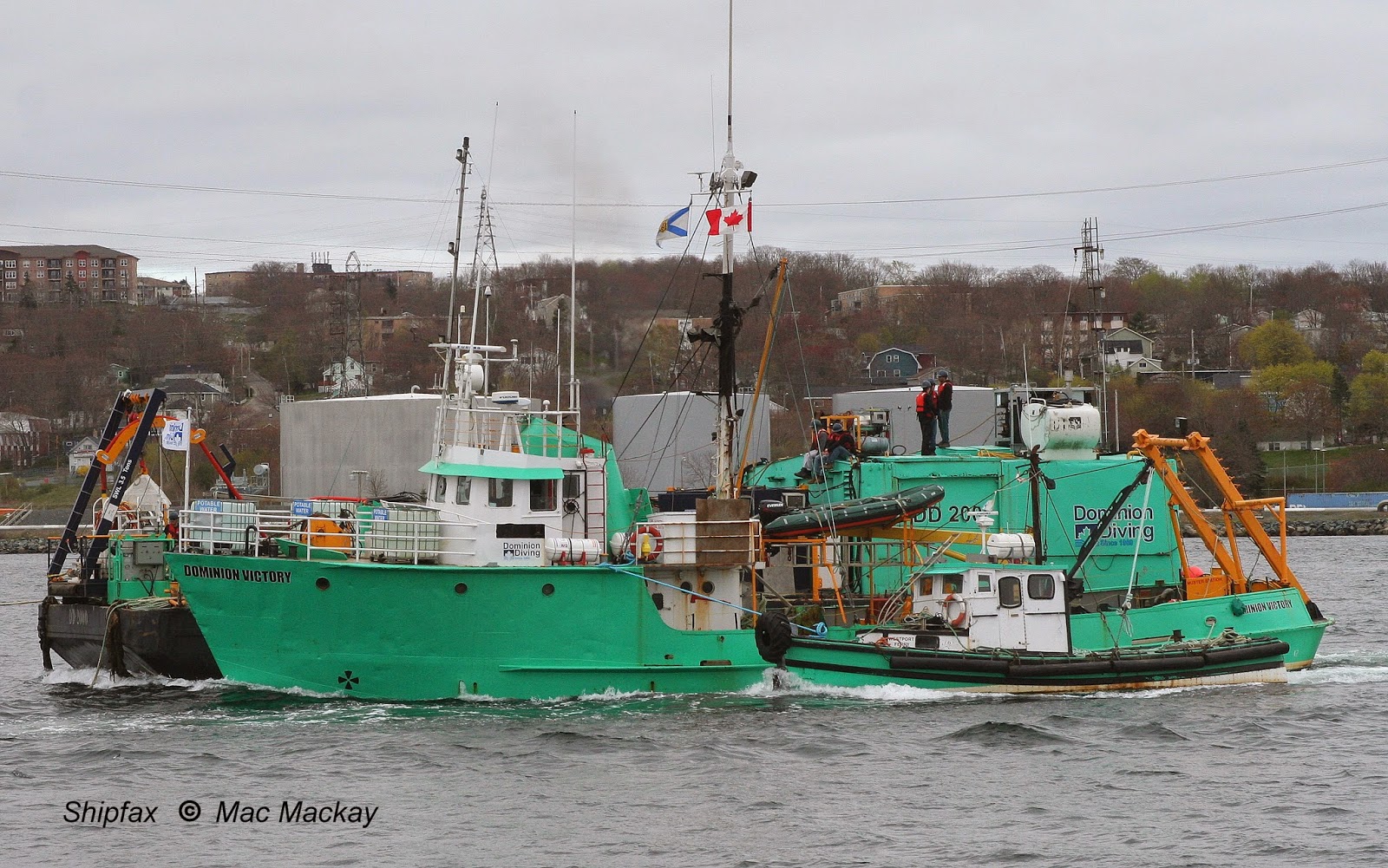 Multi-purpose Dominion Victory, a tug, diving tender, research vessel, assists in powering the flotilla, and will provide accommodations for divers working from the barge. 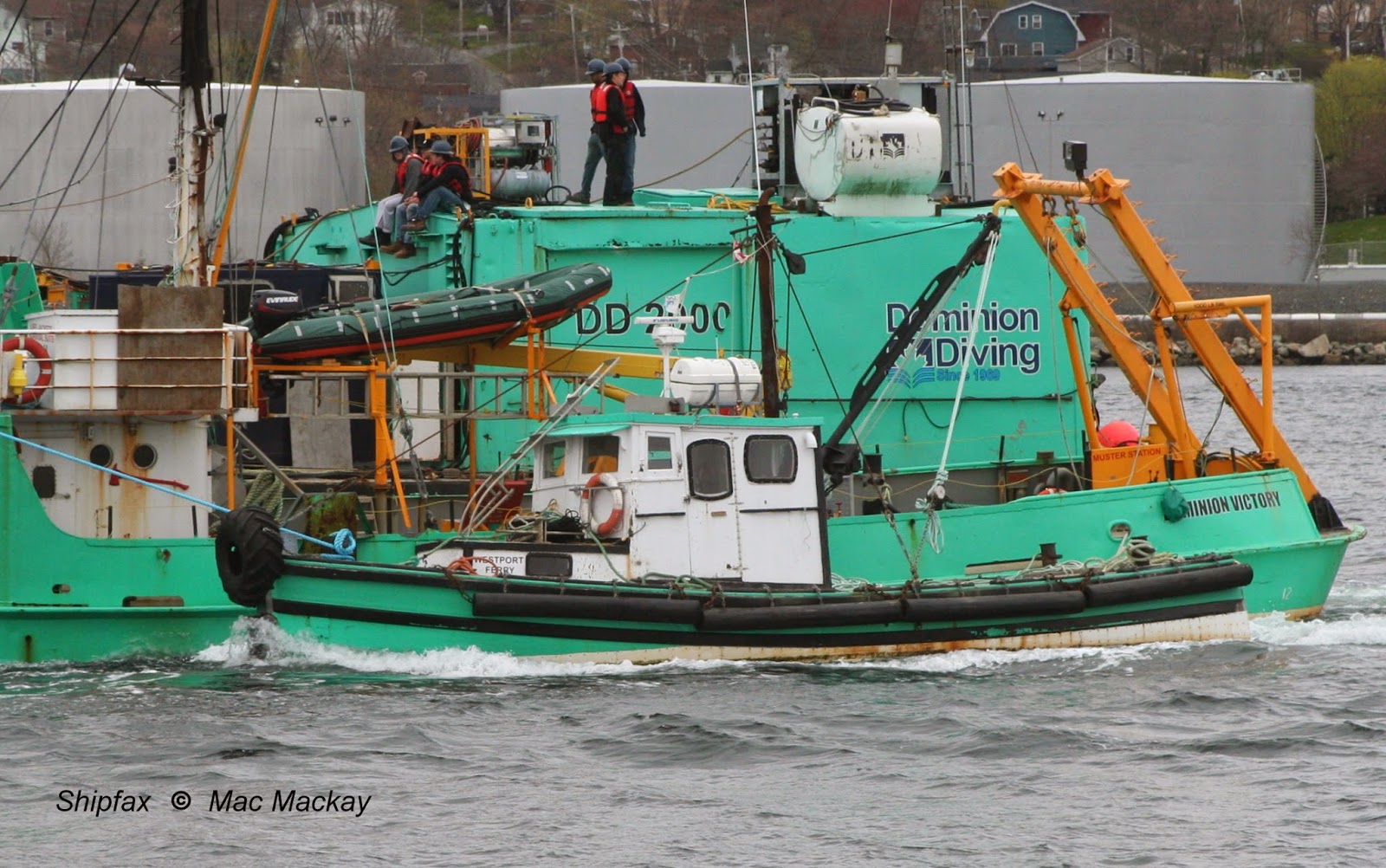 Veteran tug/workboat Westport Ferry will be the tender during the dive operation.

The barge will be moored in the Basin for 20 days as divers work on maintaining the RCN's sound range.  take the Nova Scotia Community College's deep dive course. The operation will be 24 hours a day, seven days a week. 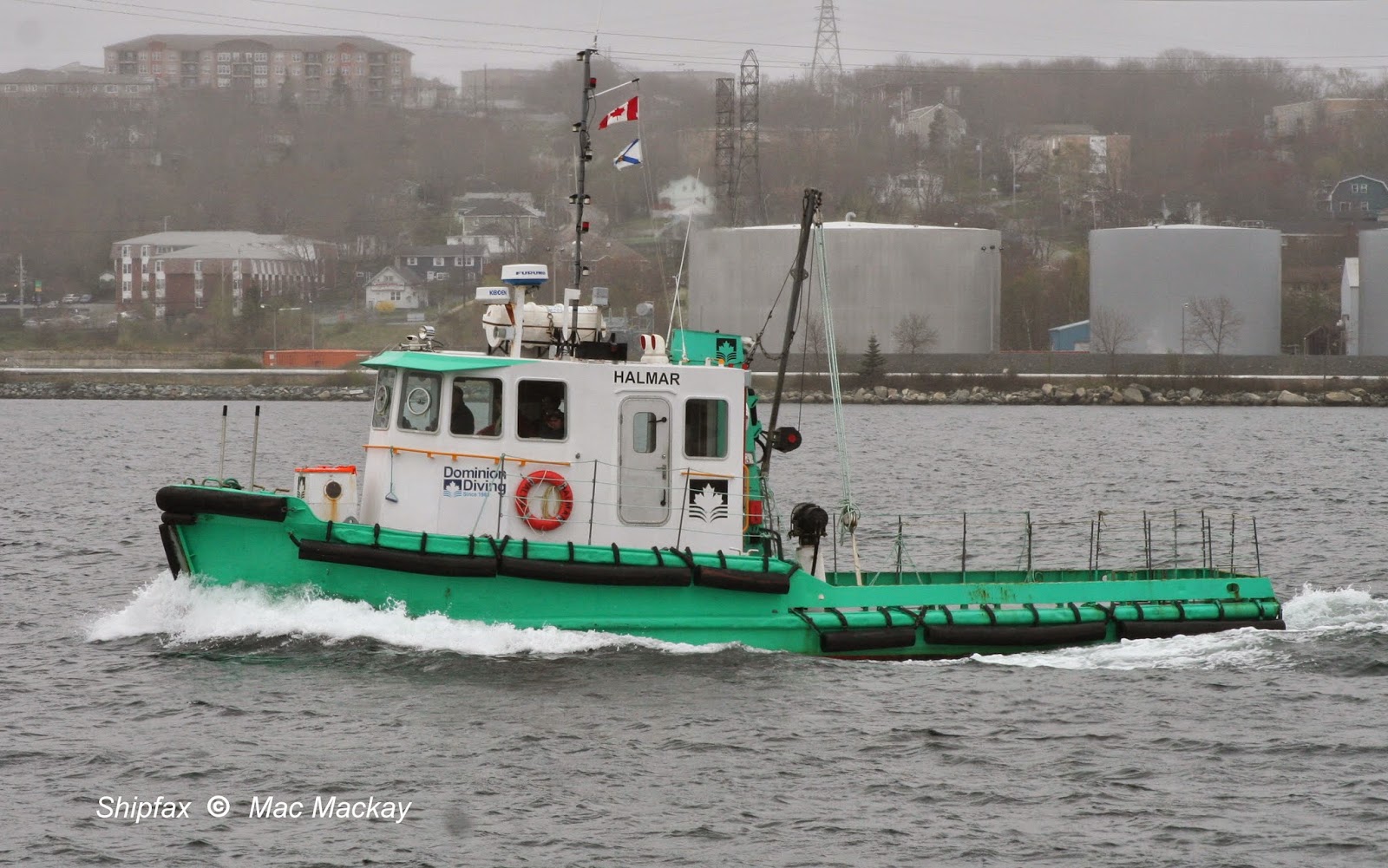 When the nine ship seismic fleet sailed from Halifax last night, the tug Beverly M 1 remained in port. I t moved from pier 24 to pier 25, and as of this afternoon the crew was on deck doing some painting.
Along with Atlantic Fir ii is to be a picket or chase boat for the seismic exploration on the Tangier prospect south of Sable Island. 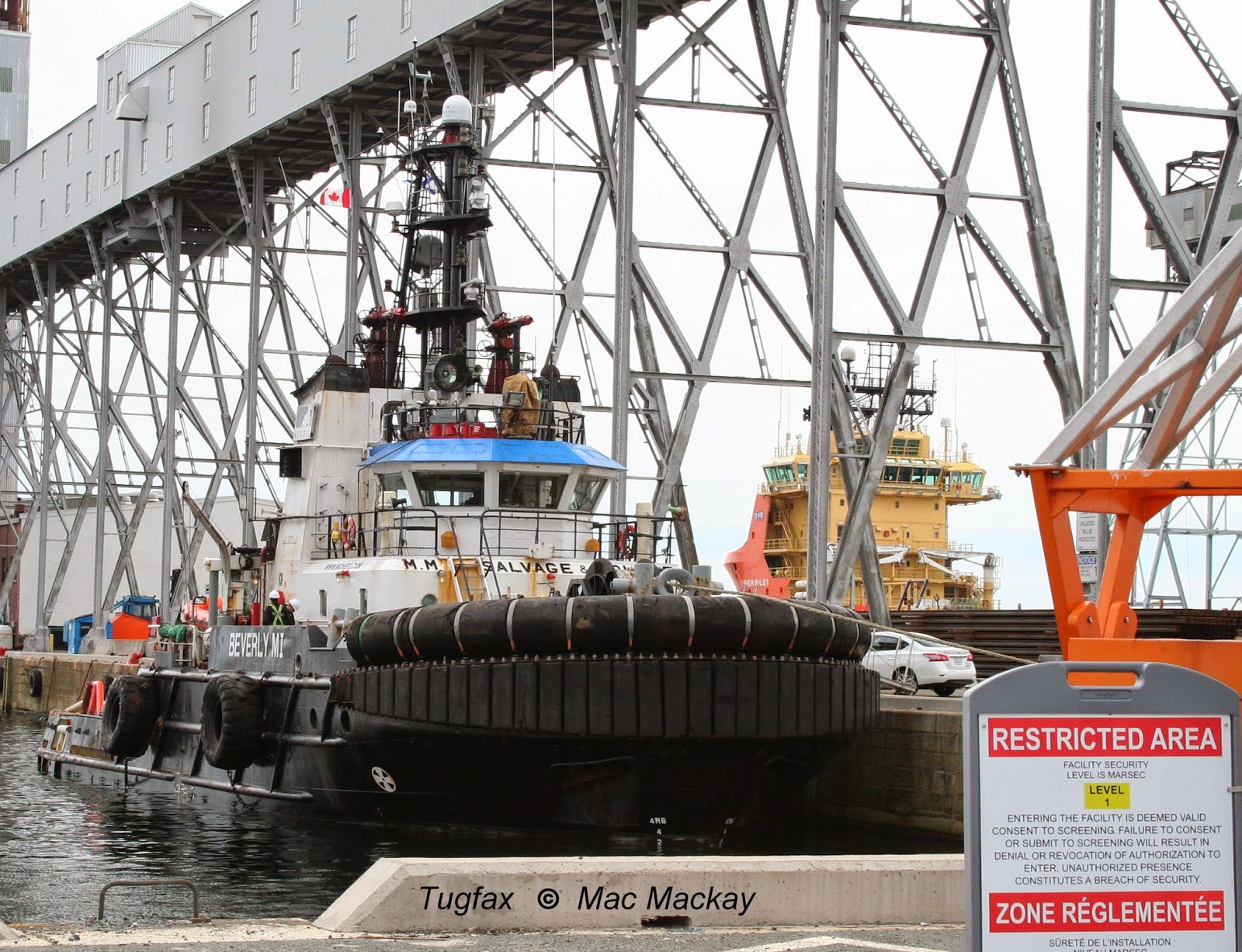 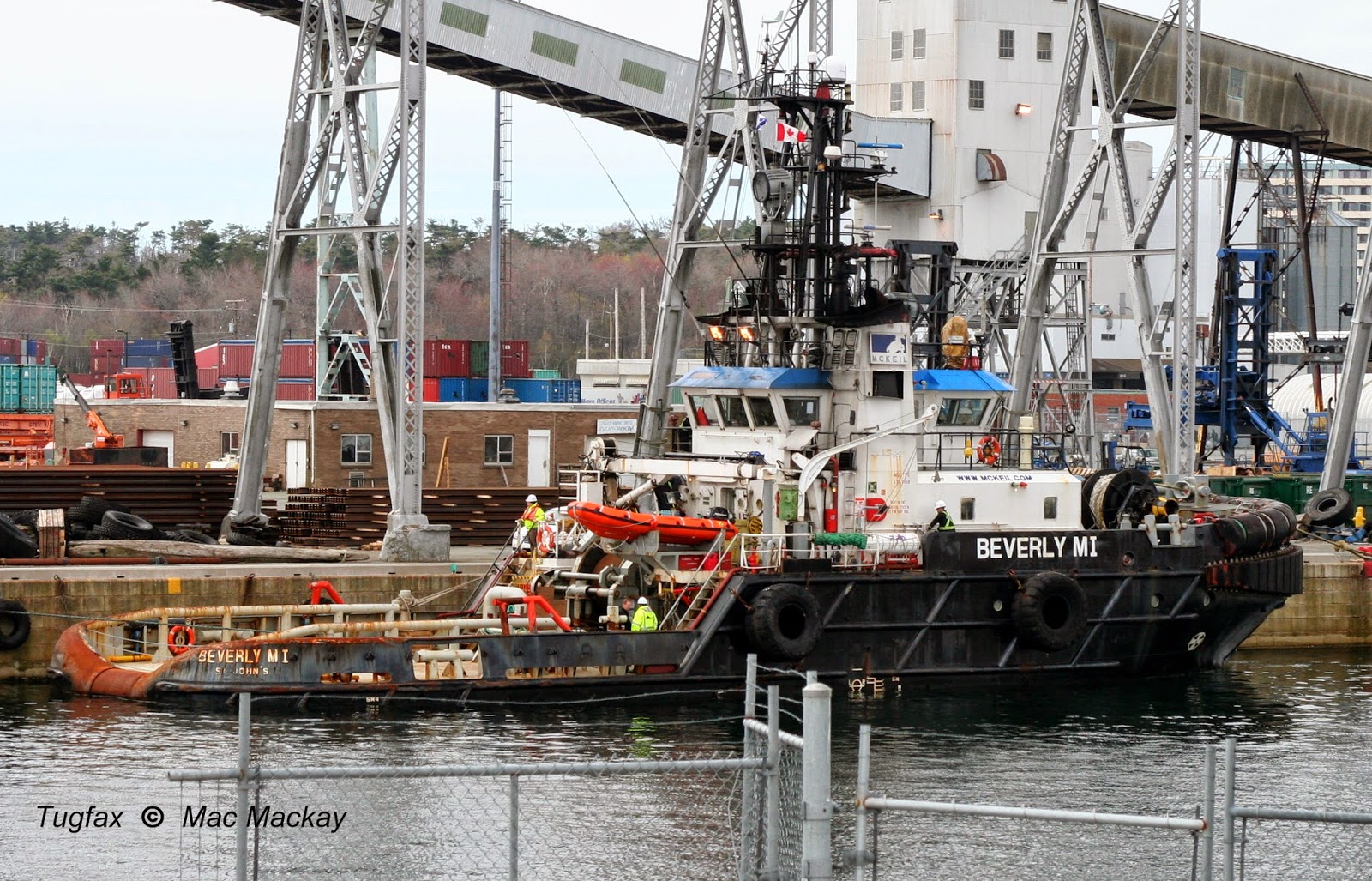 The small tug Belle D  has become busier with the start of cruise season in Halifax. The tug is used to handle a barge for ship's garbage and waste. The benefit of using a barge, as opposed to trucking the waste away, is that it happens on the 'off' side of the cruise ship and does not interfere with the passengers' comings and goings. All international garbage and waste requires special disposal procedures, including incineration for certain classes of waste.
In the photo  Belle D is south bound for pier 31 to handle waste from the cruise ship Veendam. The tugs Atlantic Fir and Beverly M 1 are tied up at pier 324, nose to nose, readying for BP's 2014 seismic expedition off Nova Scotia. The are is so heavily fenced and secured, that photography poses a bit of a challenger.From my perch I couldn't tell if they are being fitted with any special equipment for their work, except for supplementary satellite communication domes.


BP has hired six actual seismic boats, two suppliers and these two tugs to act as picket boats or chase boats.
They seem an odd choice to me, since neither one would be a natural pick for their sea keeping abilities. They are undoubtedly able towing vessels, but towing does not seem to me to be a necessity in seismic work. 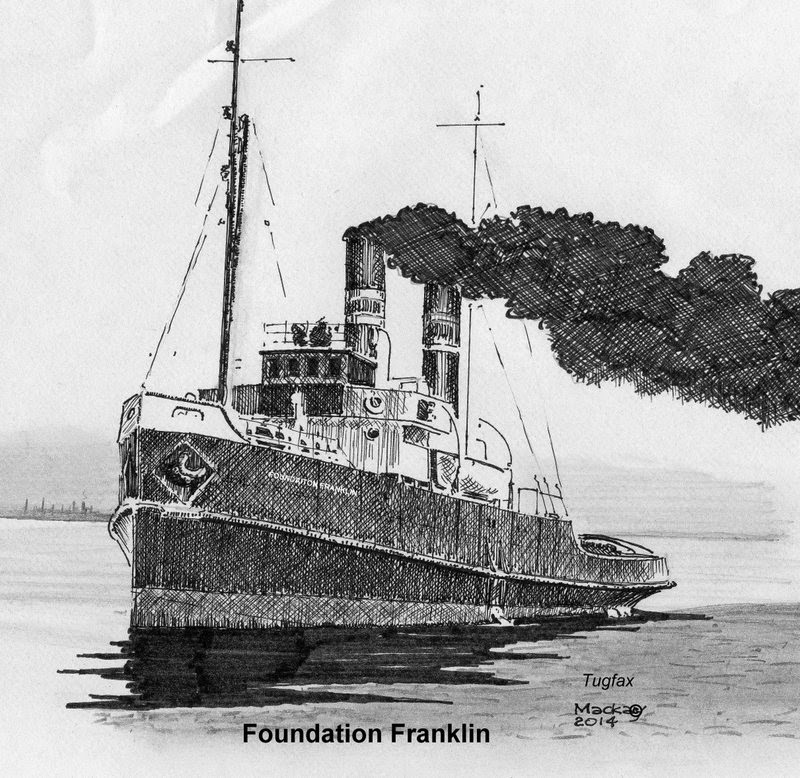 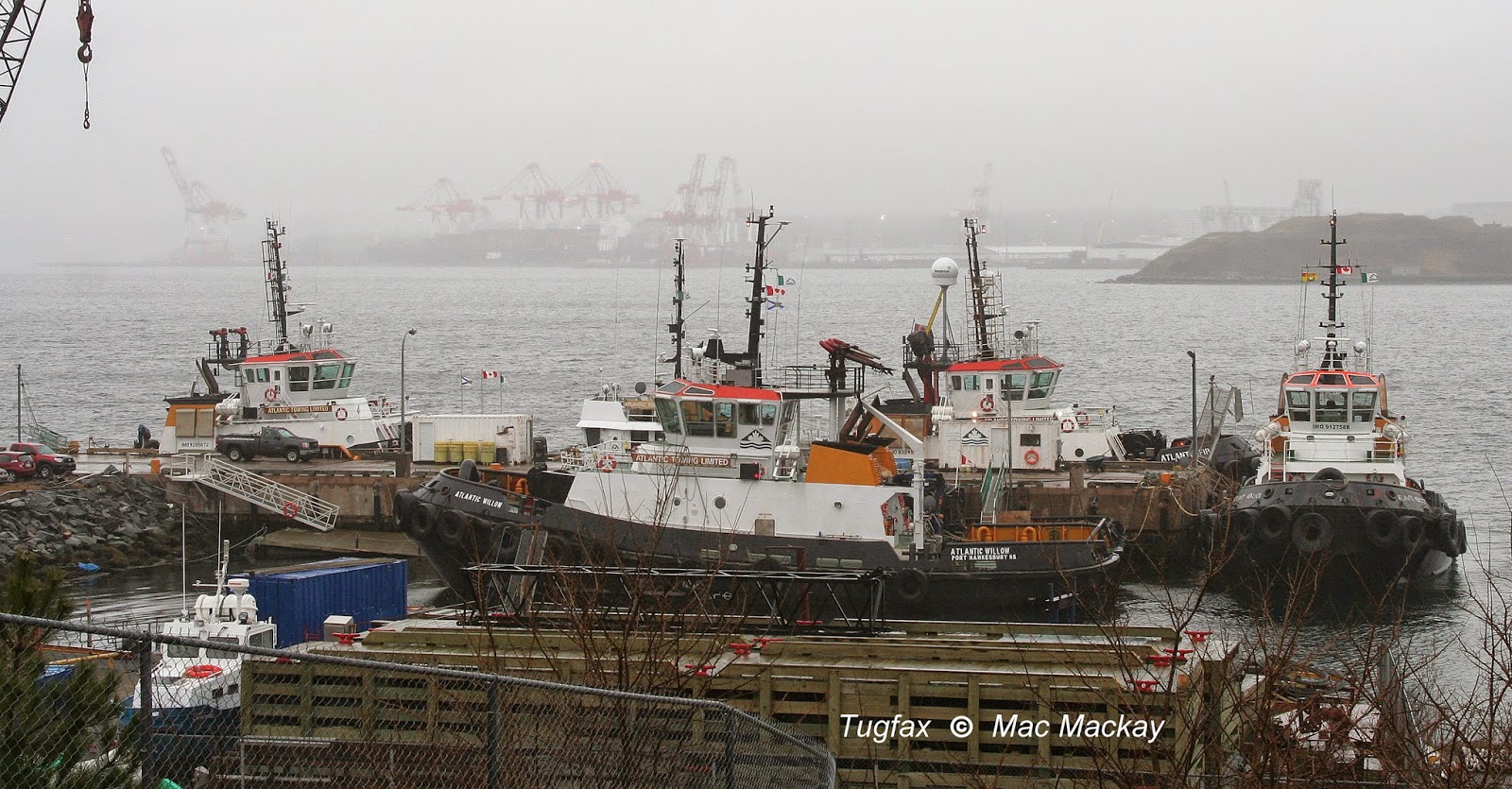