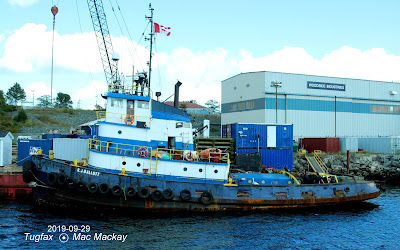 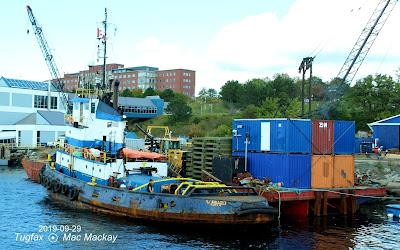 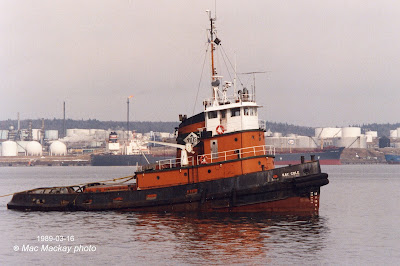 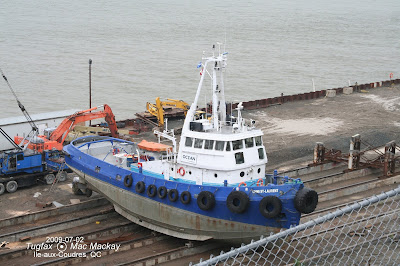 Tugs from above - Updated

A walk out on the Angus L. Macdonald Bridge this afternoon allowed for some interesting angles on various tugs.

First was a general view of two of HMC Dockyard's  Glen tugs awaiting their next assignment. 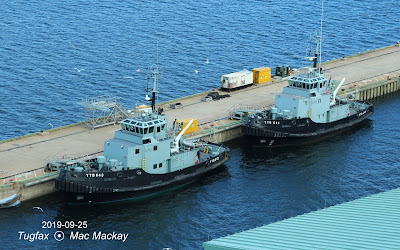 The third tug, Glenevis YTB 642, was apparently elsewhere [see Upate below], possibly on refit. Construction work on the replacement tugs of this class will begin soon at Industrie Océan in Ile-aux-Coudres, QC. Unfortunately the powers that be think that only two tugs will be needed in Halifax, and two in Esquimalt, to replace five tugs and two firefloats.

The current tugs are the second generation of Glen tugs in the RCN (the first generation were built during World War II), and using many of the same names. I hope the new tugs will maintain the tradition. [see footnote] 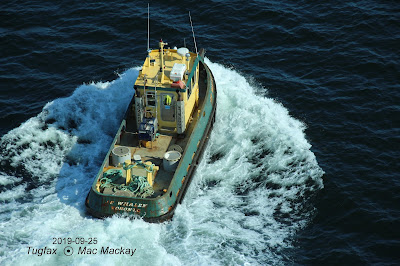 I have photographed McNally Construction's J.F.Whalen from every angle but this one since it was built in 2013 by Chantier Forillon in Gaspé,QC. In this view the tug is sailing light and appears to have an electric arc welder mounted on deck just aft of the house. The 670 bhp (492 kW) twin screw tug has a demountable house for road transport and push knees for scow work.
It is registered in Toronto, ON, although McNally is headquartered in  Hamilton, ON. 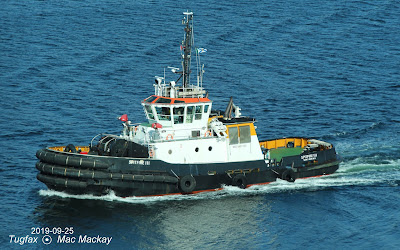 Spitfire III heads north to assist in docking a container ship. One of three 5300 bhp (4000 kW) (70 tonne BP ahead, 66 astern) tugs built by Eastisle, Georgetown PE in 2007, it was designed to berth LNG tankers in the open roadstead off Saint John, NB. That facility does not need full time tugs so this one and Atlantic Bear work out of Halifax and make trips to Saint John when needed. The third tug Atlantic Beaver remains in Saint John.
It is fitted with a heavy duty berthing winch forward and a third "lip" of tubular fendering around the bow. It also carries a towing winch aft and is rated LR FiFi1 with water spray.

Footnote:
I was reminded recently about the first Glendyne, (YTB 503) built in 1945 by Russel Brothers, Owen Sound, ON. On February 15, 1957 while assisting in docking HMCS Magnificent, the tug was girted [pulled over by its own towing line] when the aircraft carrier went astern, and capsized with the loss of two lives.The skipper and four other crew members were recovered alive.
An inquiry found no negligence, but a misunderstanding about instructions to the tug lead to the tow line becoming so taught that neither tug nor ship could release it in time.
The aircraft carrier HMCS Magnificent was returning from duties with the UN Emergency Force in Suez.

Glendyne was recovered from 80 feet of water off HMC Dockyard by navy divers and Foundation Maritime's crane barge Foundation Scarboro on February 19. The tug returned to service and was retired in 1979. The builder's plate has been preserved, apparently at the naval museum in Halifax. The hull was sunk off Shearwater for diver training for the Fleet Diving Unit Atlantic, but I have no idea if it is still there. Her wooden wheelhouse served as a ticket office at the Maritime Museum of the Atlantic wharf in Halifax. 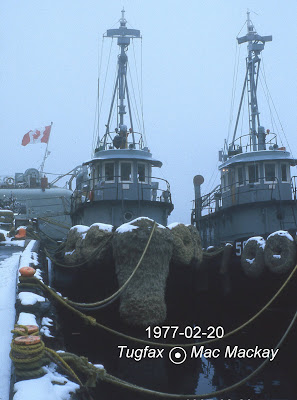 Two first generation Glens laid up retired but not yet de-stored at HMS Dockyard in 1977.


The second Glendyne, built in 1975 by Yarrow in Esquimalt, is one of two second generation Glens based at HMC Dockyard, Esquimalt and will be replaced under the new program, along with its west coast running mate Glendale.

For more on the first generation Glens see:
http://tugfaxblogspotcom.blogspot.com/2013/05/first-generation-glen-class-tugs-of-rcn.html


Update:
Thanks to readers: Glenevis is in St. John's, NL for ship berthing duties for visiting Canadian and foreign warships. Another reason why only two tugs in Halifax won't do!

The Province of Alberta has become an important market for small tugs and workboats as the major oil companies need numerous reservoirs and catchment basins. These waterbodies require maintenance including dredging and icebreaking.

One of the major players is Suncor in Fort McMurray. In recent years it has built up a fleet of its own in addition to several boats it has chartered in, including conventional tugs and multicats to support work barges and cutter suction dredges.

The tugs are generally under 15 gross tons, and thus are only registered by official number, despite carrying a name.

Quebec City based Groupe Ocean has been providing various of the craft some chartered and some for purchase, which can be transported to Alberta over the road and assembled on site. 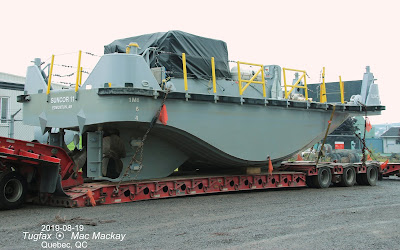 The latest appears to be a twin screw icebreaking tug/ workboat, built at Ocean's Quebec City facility, Ocean Marine Works Inc*. Carrying the (unofficial) name Suncor 11, it was spotted last month already loaded onto a heavy lift trailer, less its deckhouse, and ready for the road. No official number was visible on the hull, but it is likely C28964AB. If so, it is equipped with engines delivering 975* bhp and measures about 40 feet long. 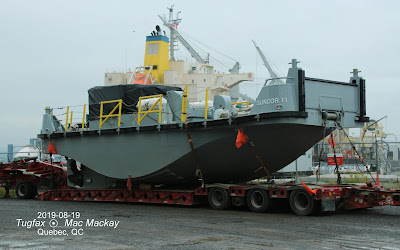 I always welcome corrections from readers, so wish to thank those who pointed out some mistakes in the orginal post:
Revision: In fact Suncor 11 was built by Industrie Océan at Ile-aux-Coudres, QC. It was transported to the Quebec City facility for adjustments prior to beginning its  long road trip. It is powered by a pair of 500 bhp Volvo Penta engines.