McNally's crew quickly assembled the remaining components and had the J.F.Whalen all back together by Wednesday.
With push knees in place, the tug doesn't look quite as attractive, but I am sure they will save a lot of wear and tear when handling mud scows. 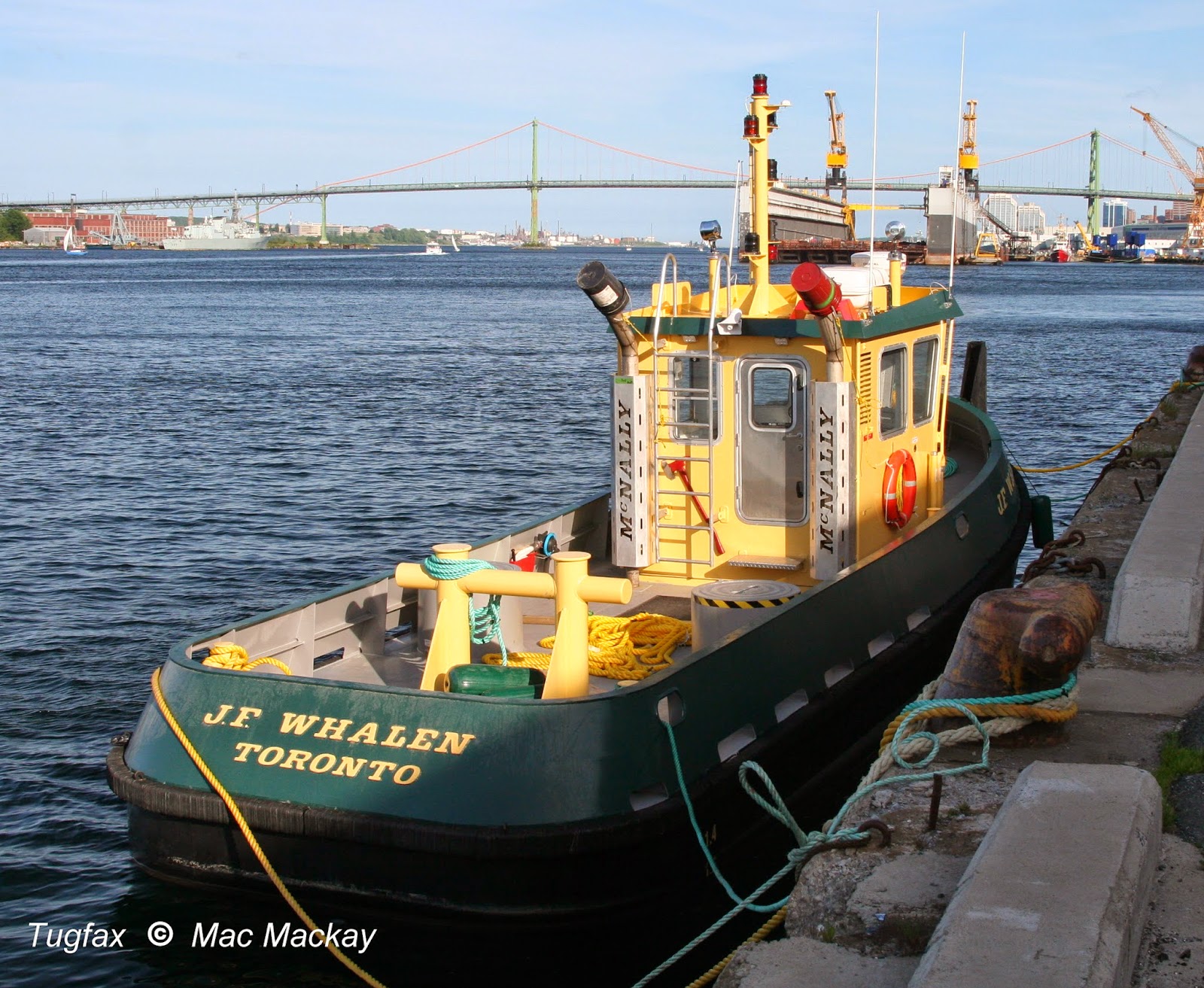 Aside from the buckets over the exhaust pipes to keep the rain out, the tug is now fully equipped and ready to run.

At the ceremony next week, the tug will be named for John Whalen, a longtime employee of McNally and Beaver Marine before that, who retired last year.

Following close on delivery of the J.F.Whalen hull by truck from Gaspé, the 55,000 lbs unit was lifted off and floated alongside today. 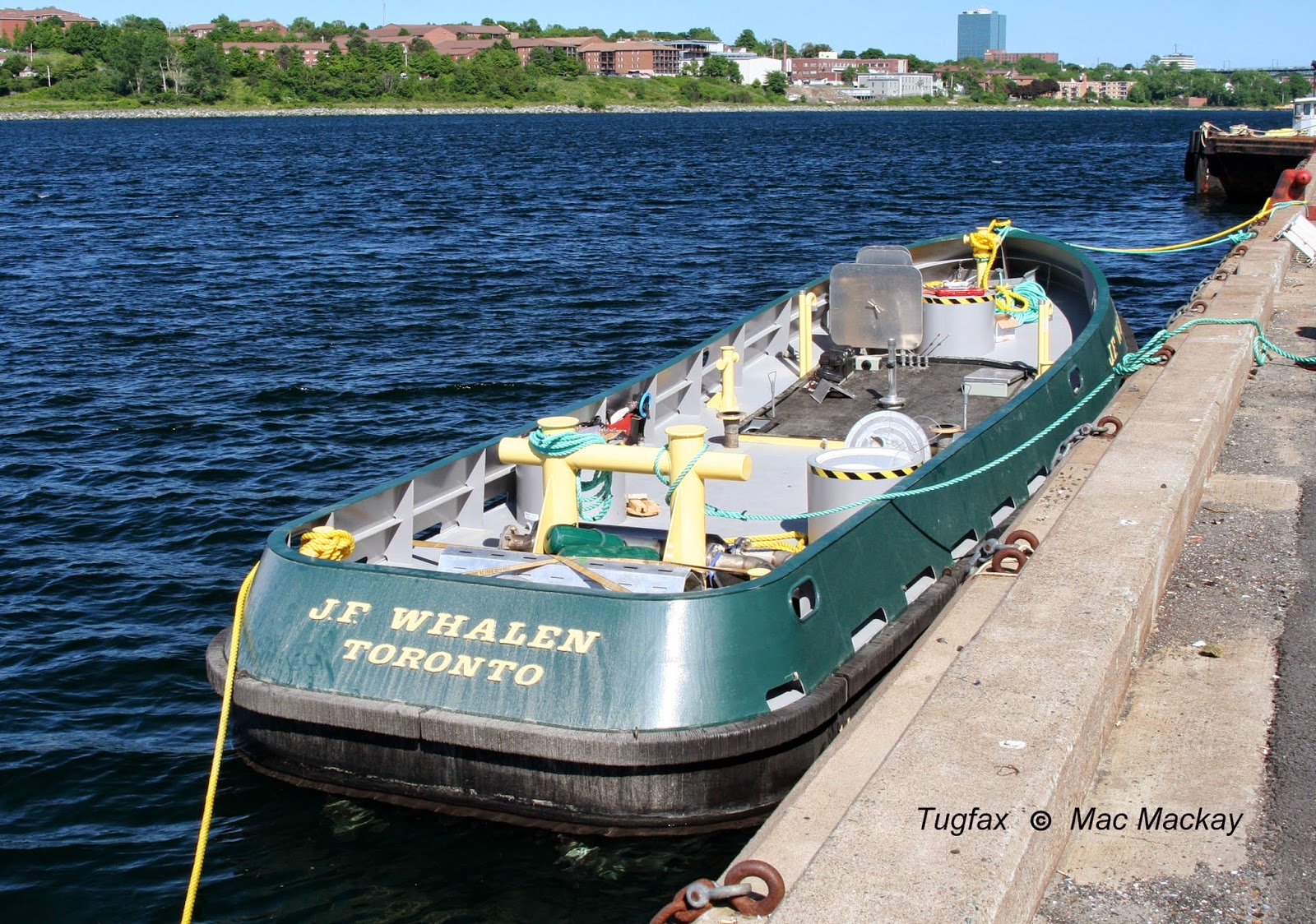 Late this afternoon the wheelhouse arrived by truck. 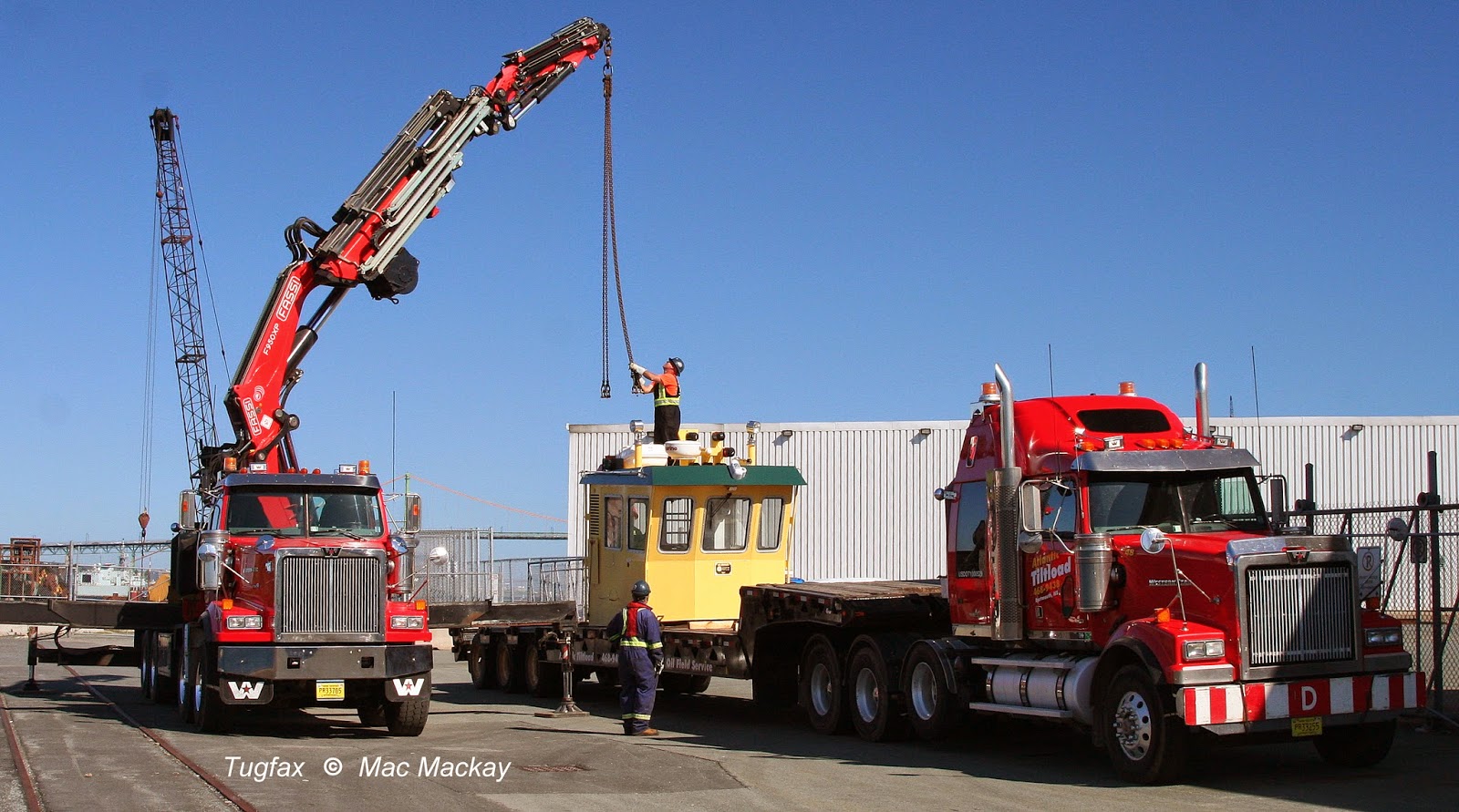 It was only a matter of minutes for the boom truck to lift the house off the flatbed, 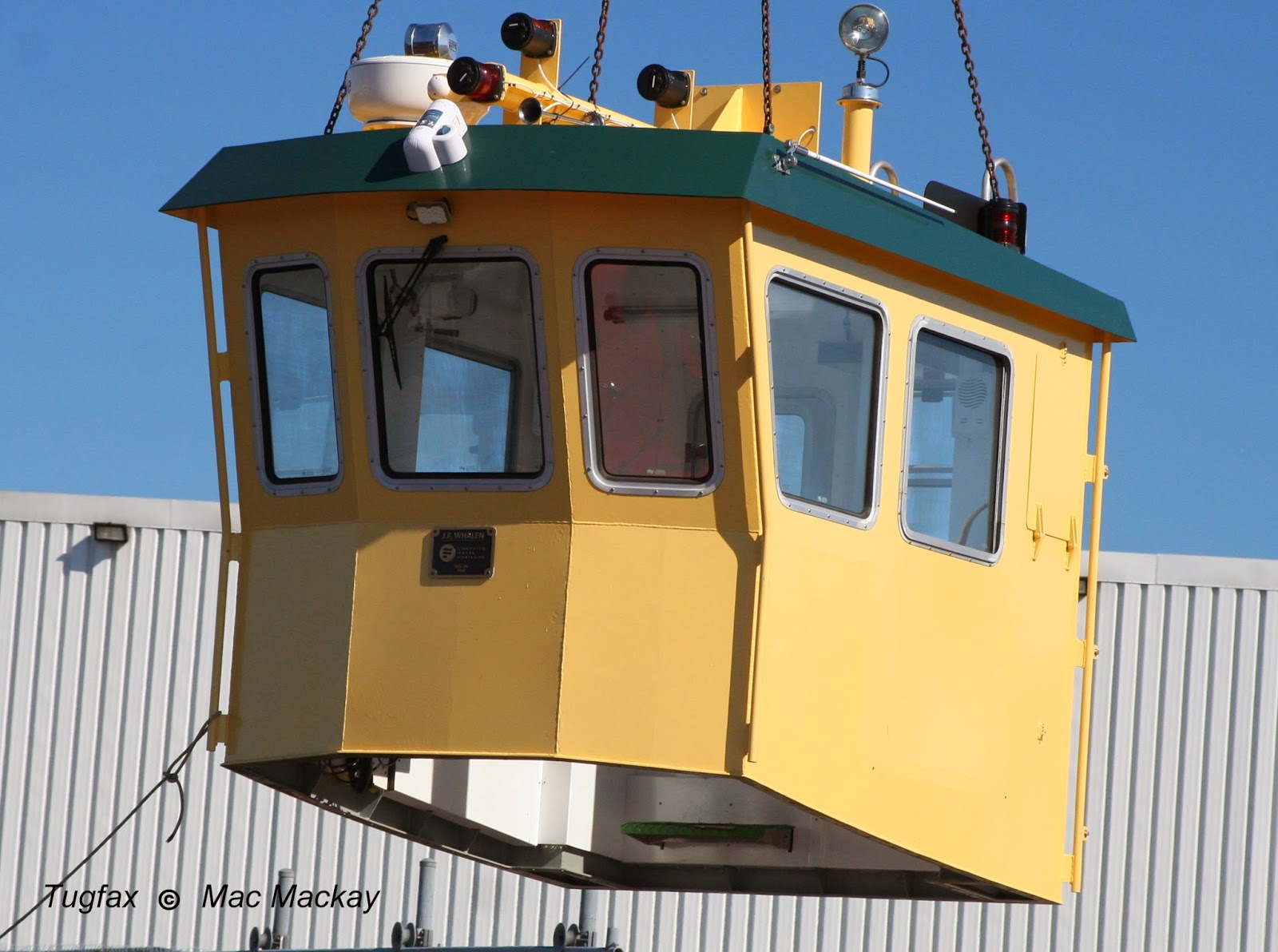 swing it over the dock, 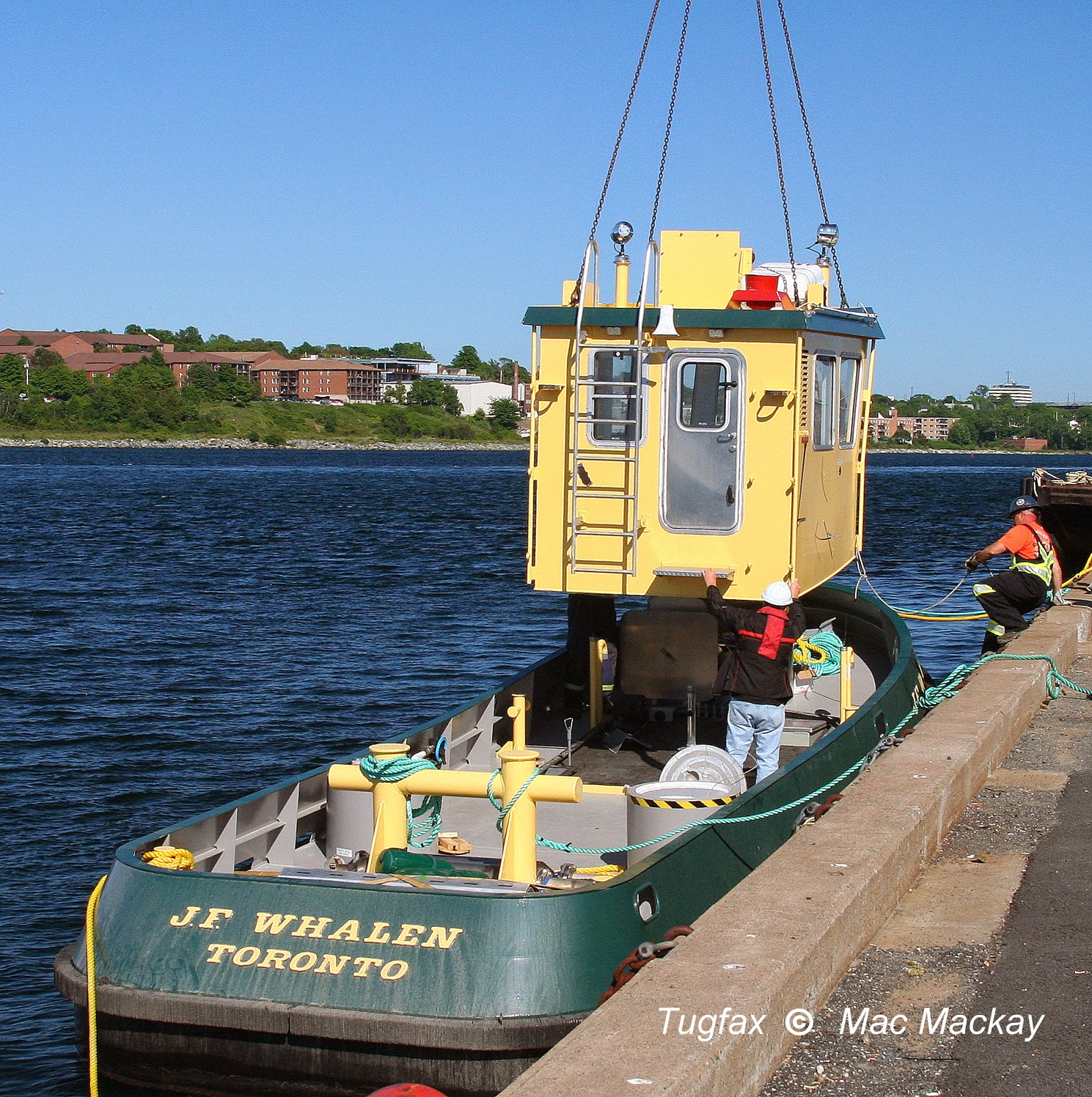 and lower it onto the hull. 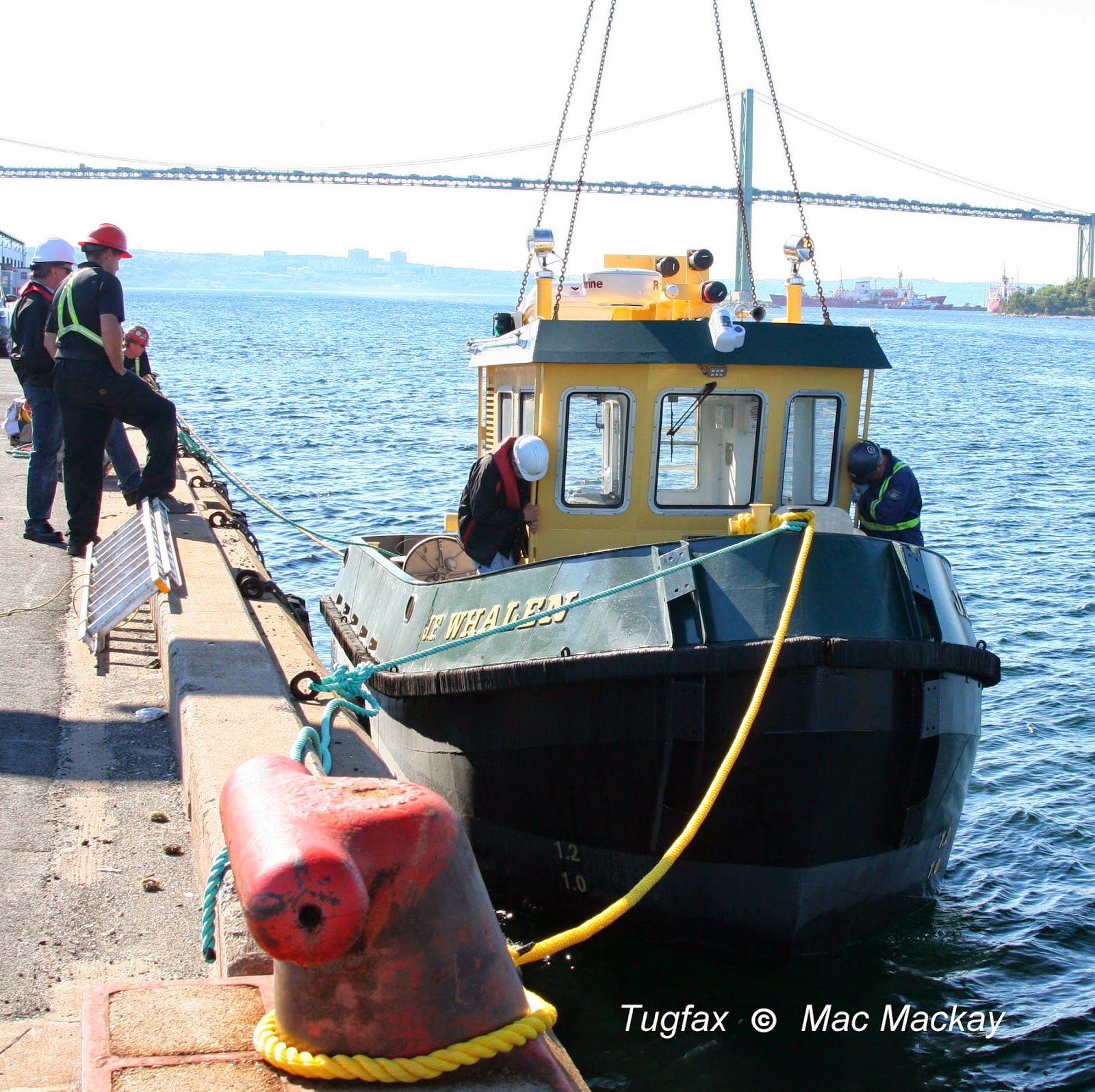 With a little persuasion from the crew, the house was soon in place. It was then bolted down, and the job of installing  components was ready to start. Among those are a pair of push knees which will be fitted into slots on either side of the stem. 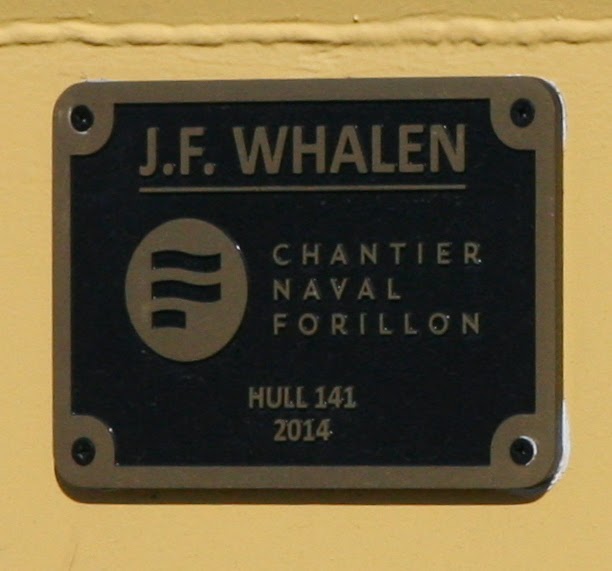 Following a naming ceremony next week the tug will be assigned to its first job. That may be in Belleville, ON. If so the process of dismantling and trucking away will happen again, but in reverse.

For the record it is Atlantic Tiltload Ltd that did the transporting and lifting.

While attending the International Tug + Salvage Conference in Hamburg, Germany June 16-20, I was fortunate enough to have a ringside seat for a special performance of the famous Hamburg Tug Ballet. Performed each year in May to celebrate the Port of Hamburg's Anniversary, the tug companies got together again, under the sponsorship of Schottel, to give an encore presentation. 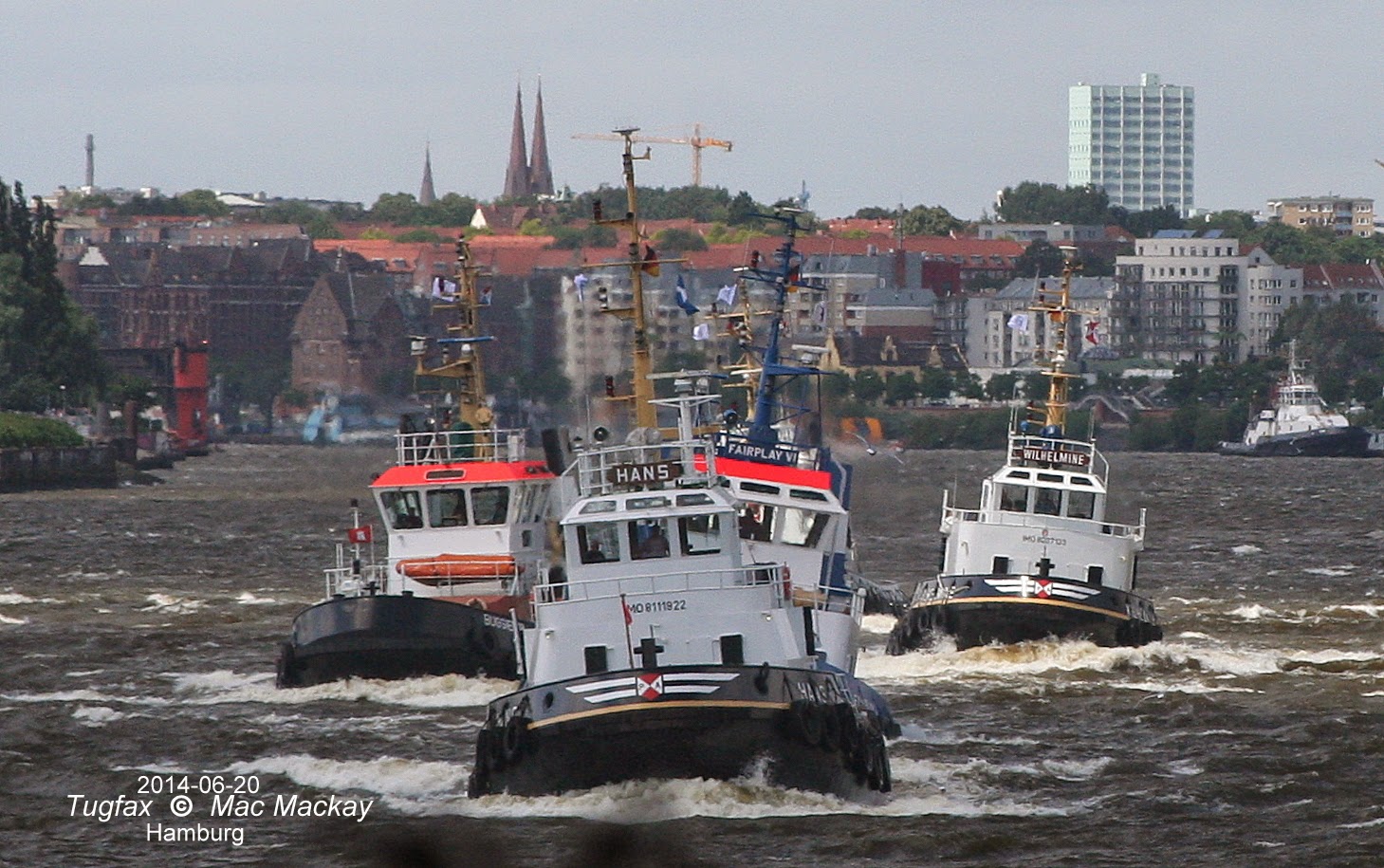 Against the backdrop of the old city of Hamburg, tugs swing and sway along to the sound of a of pop music.

First a bit about the Hamburg tug scene. A massive port, Hamburg was long the stronghold of a number of local companies that co-operated by pooling their tugs to provide services in proportion to their fleet size. They also struck a tariff, that compensated them for a relatively large crew size.
In 1999 the Dutch company Kotug "invaded" Hamburg. With smaller crews, they were able to give lower rates, and signed contracts with certain shipowners. The local combine reduced its tarifs, and still maintain their co-op dispatching system.

The tug ballet was first performed in the 1980s as a means of displaying the versatility of tractor tugs -those tugs with propulsion units mounted forward -either azimuthing Schottel units or Voith type- the pioneers of true tractor tugs. (Azimuthing stern drive tugs, ASDs, are sometimes called reverse tractors, because the drives are mounted aft).

The five tugs featured in the ballet, represent the partners in the co-operative and are beautifully painted and shined up, even though they work daily in the port. 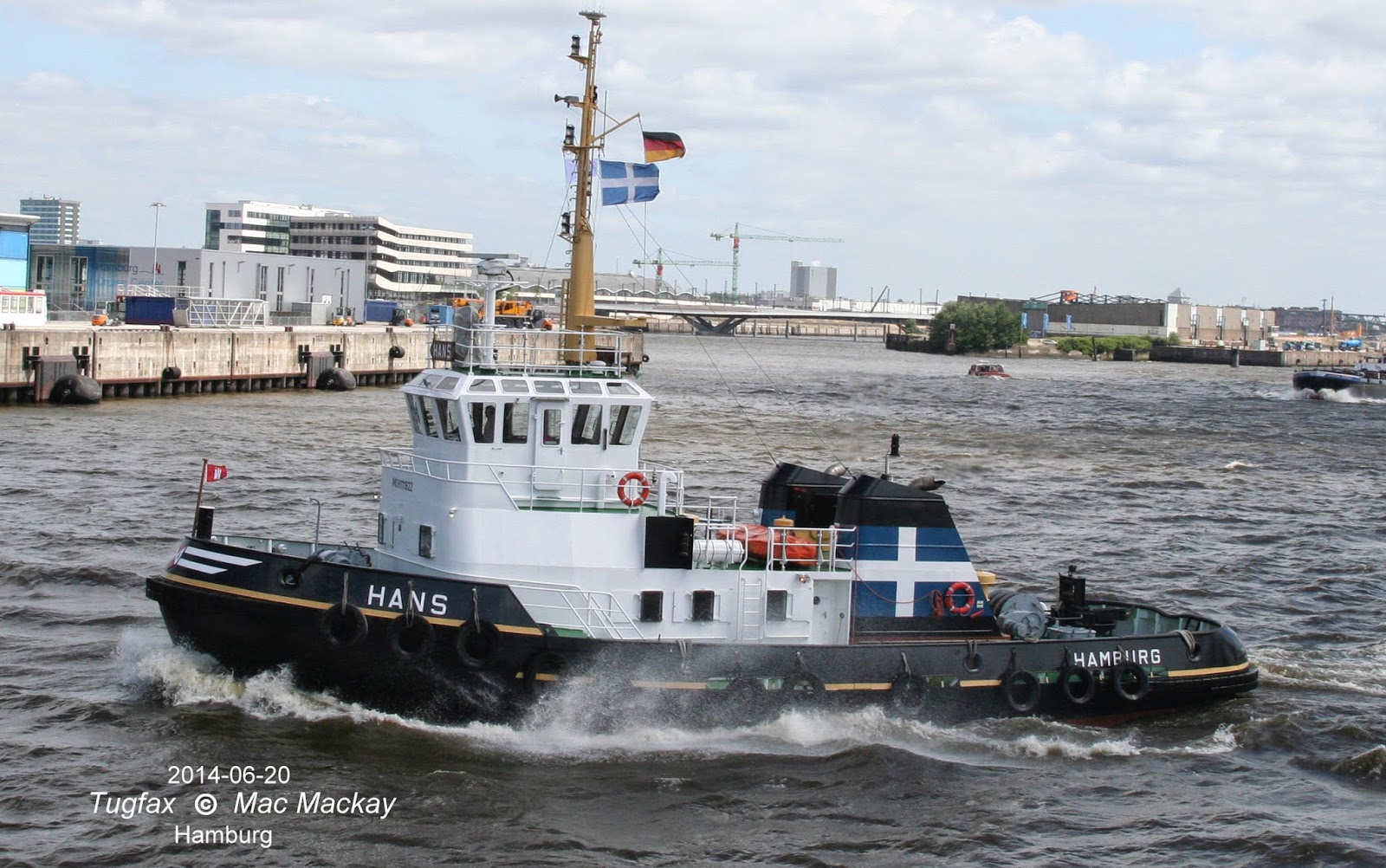 Leading the parade Hans wears the colours of Louis Meyer, the smallest company in the operating pool. The tug is actually owned by Petersen + Alpers, and still has that company's symbol on its bow and the inner surfaces of its funnels.  The two companies have overlapping ownership. 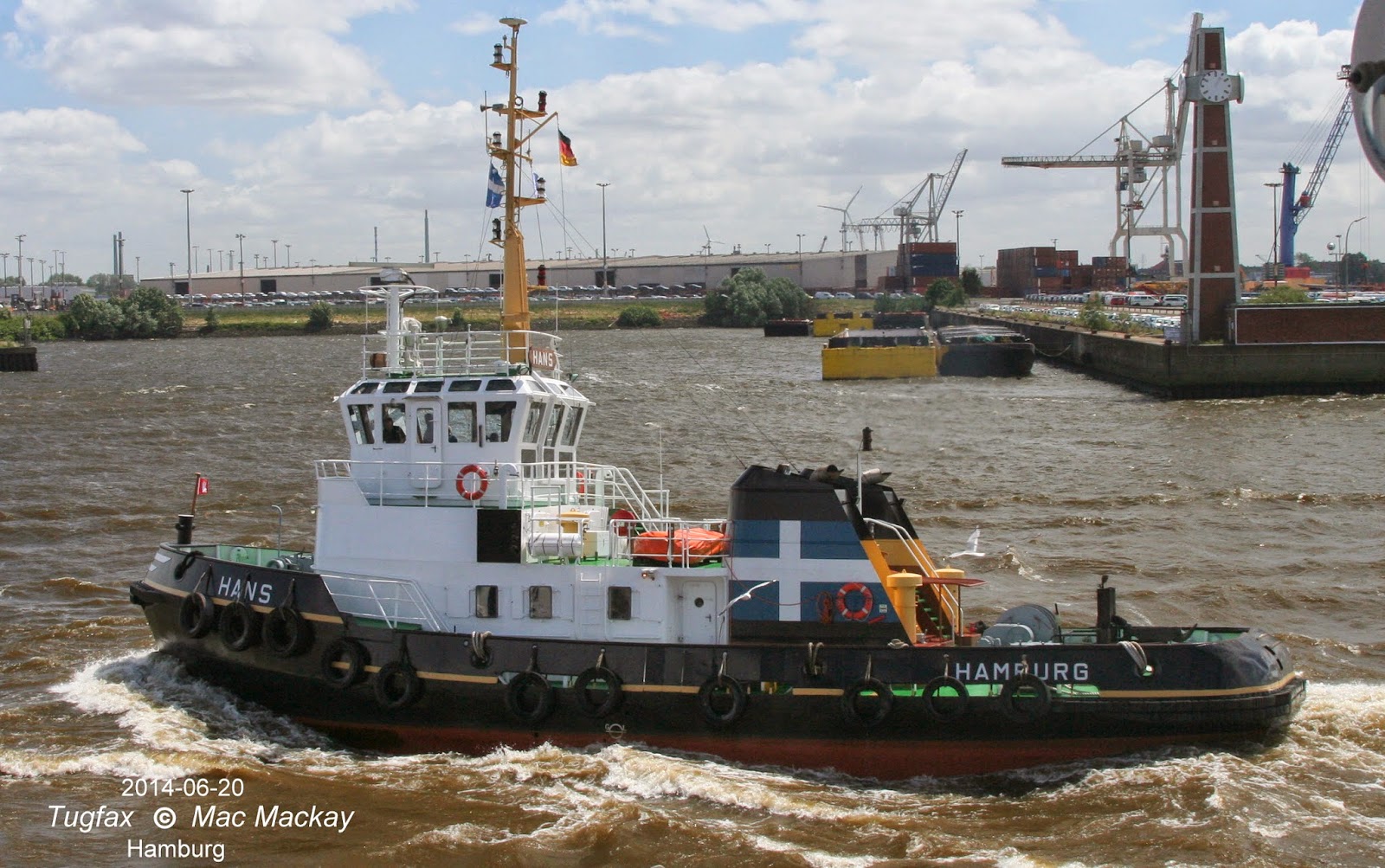 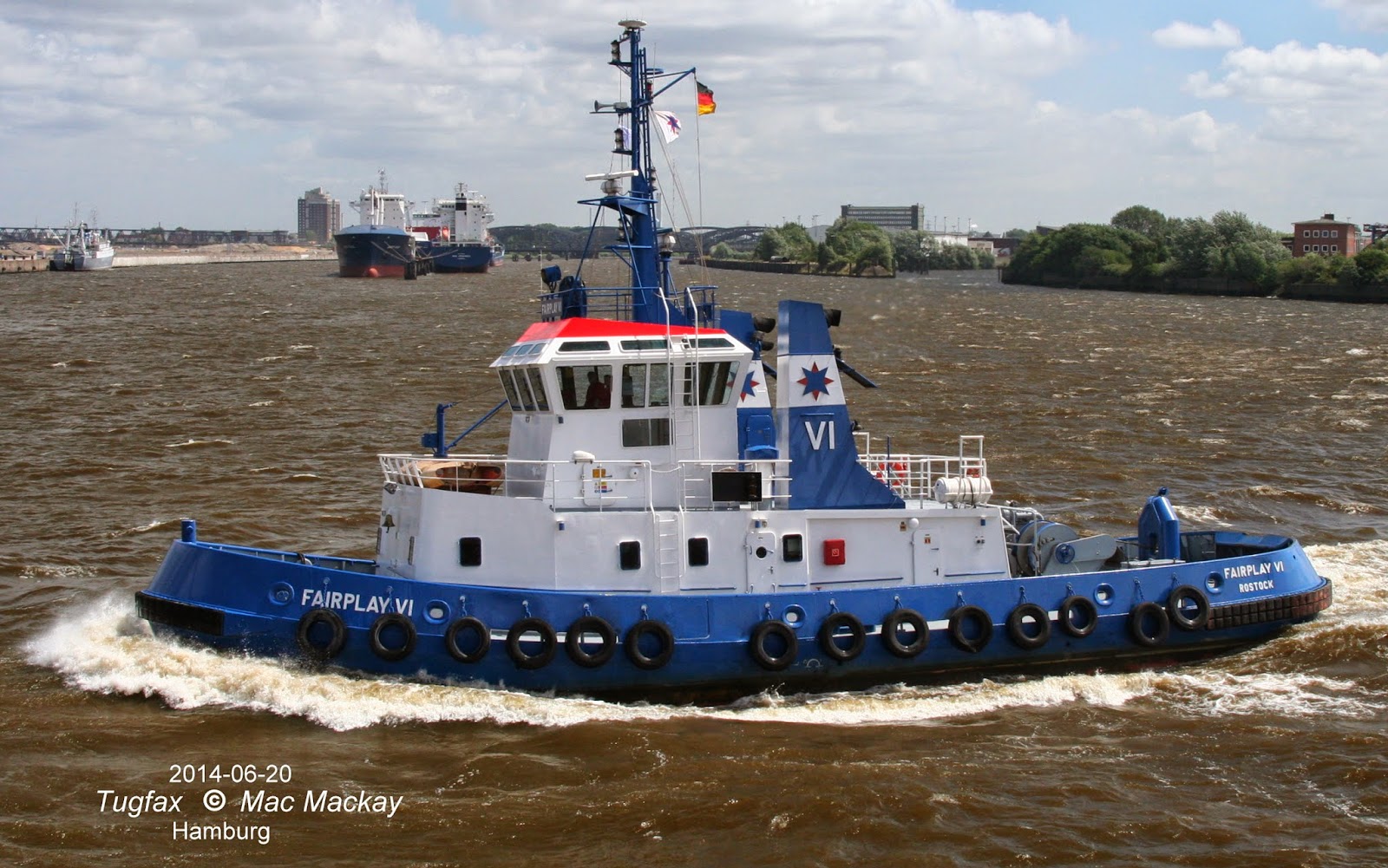 Next up was Fairplay VI, which along with the other tugs, made high speed runbys, and tight cornering. Fairplay is not a member of the pool, but participates in the ballet. 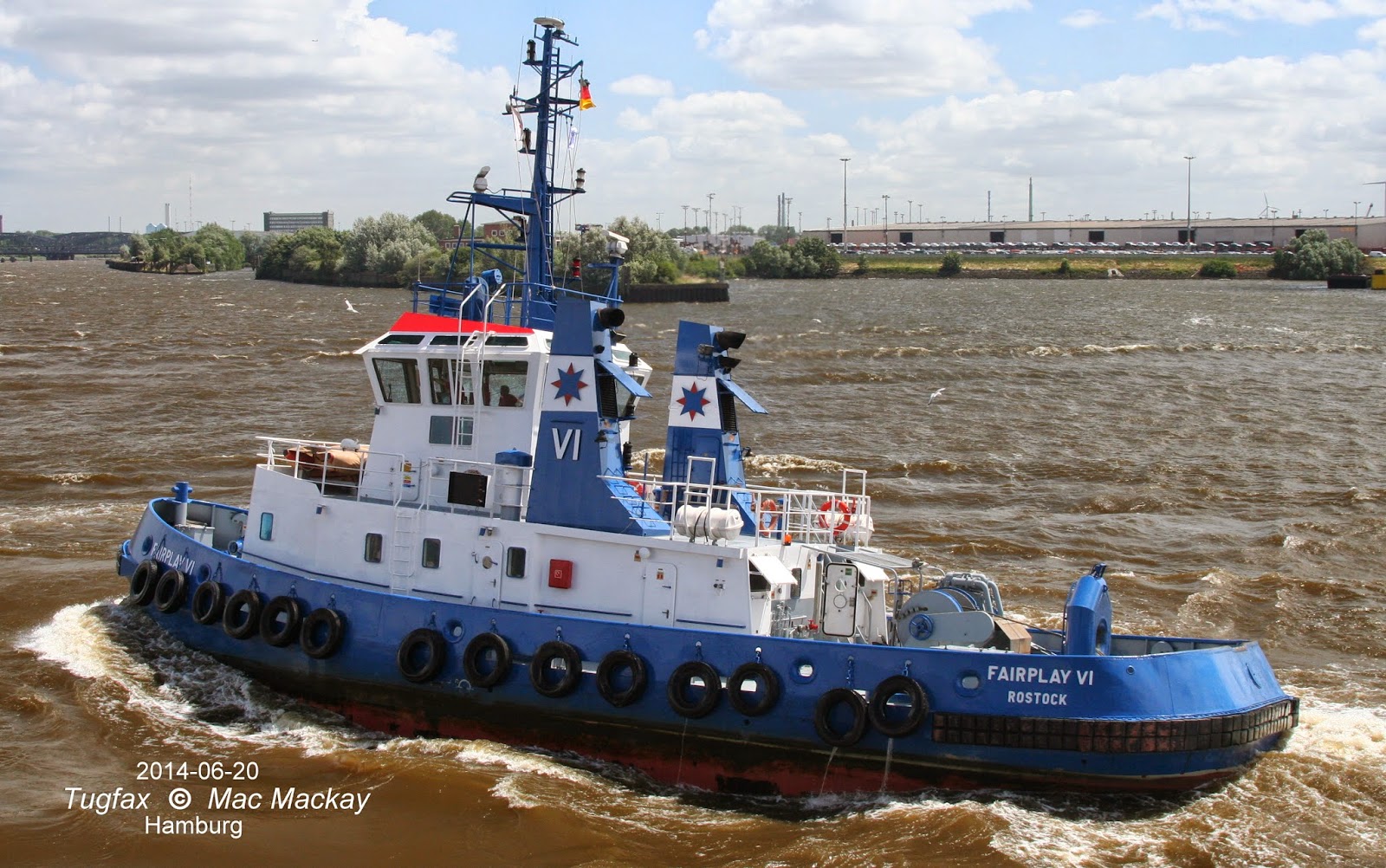 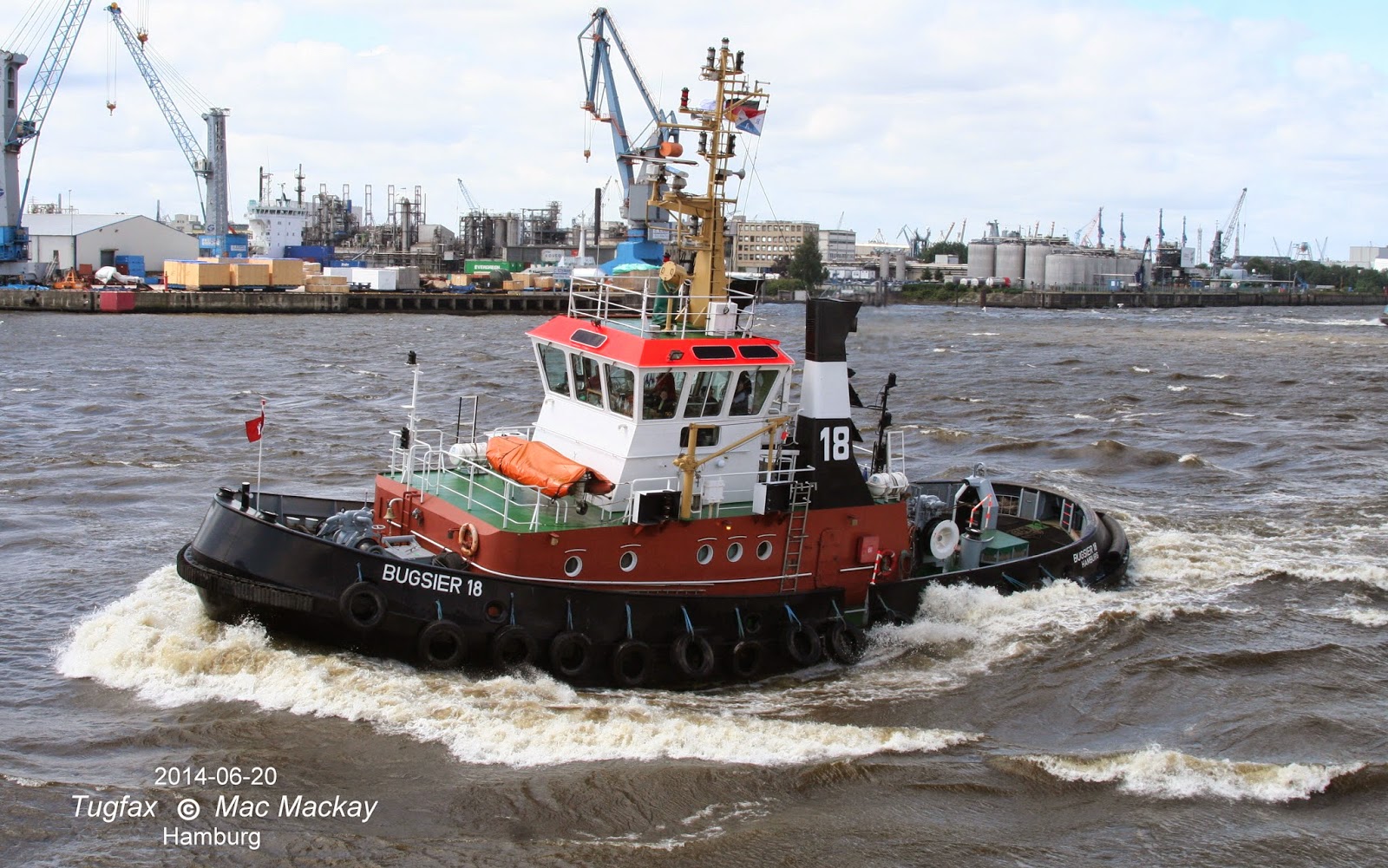 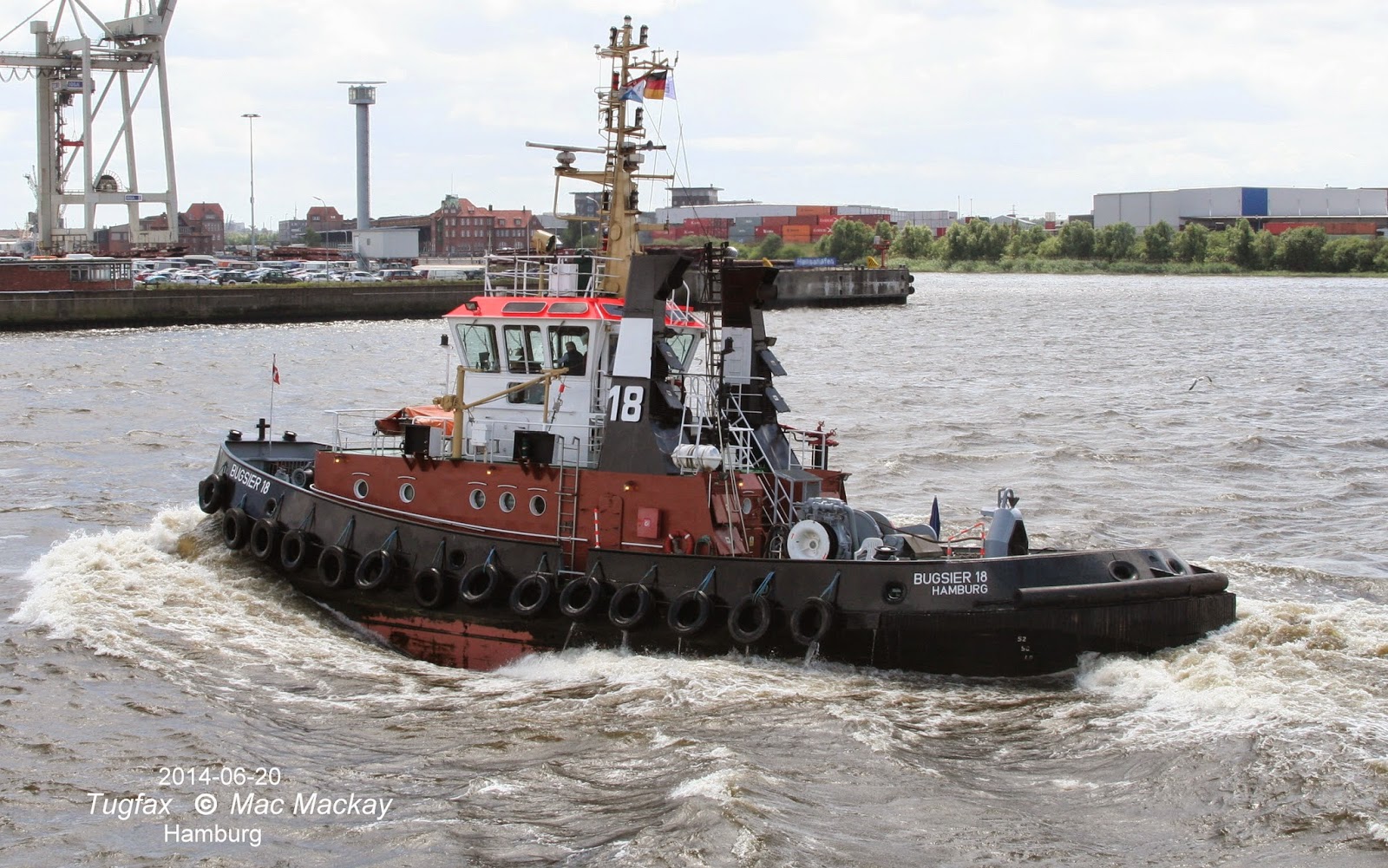 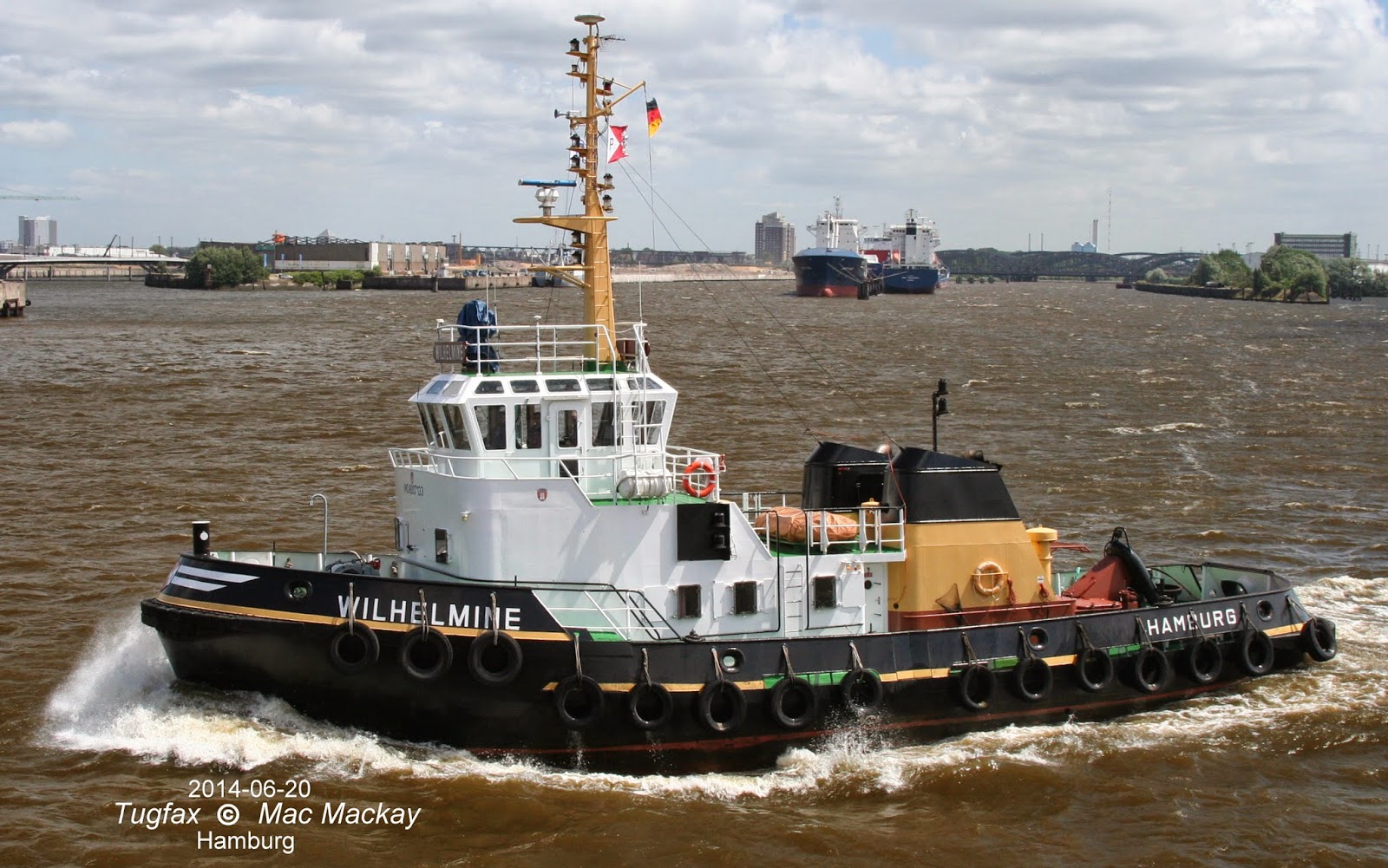 Petersen+Alpers representative is Wilhelmine, a sister of Hans, the parade leader. 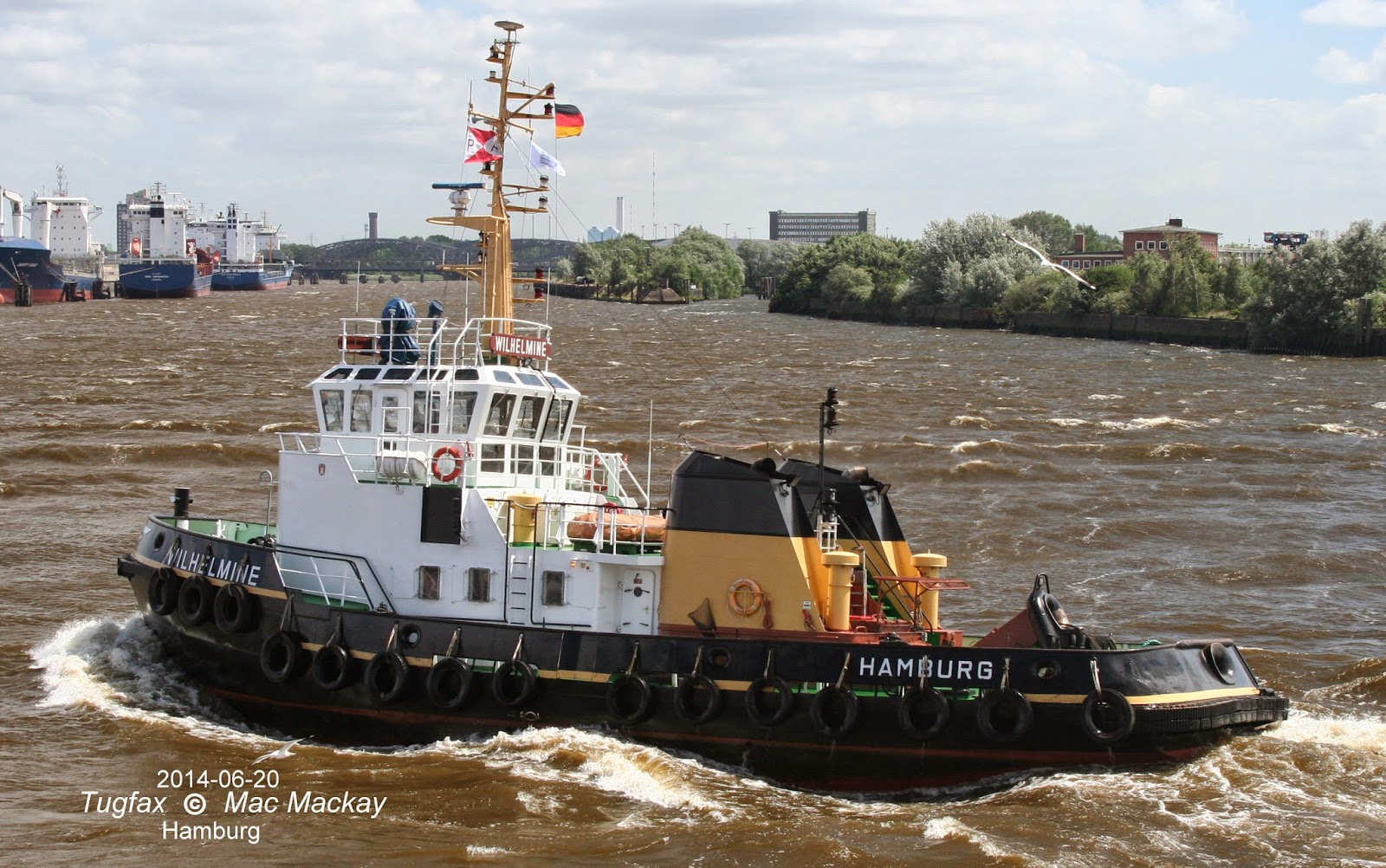 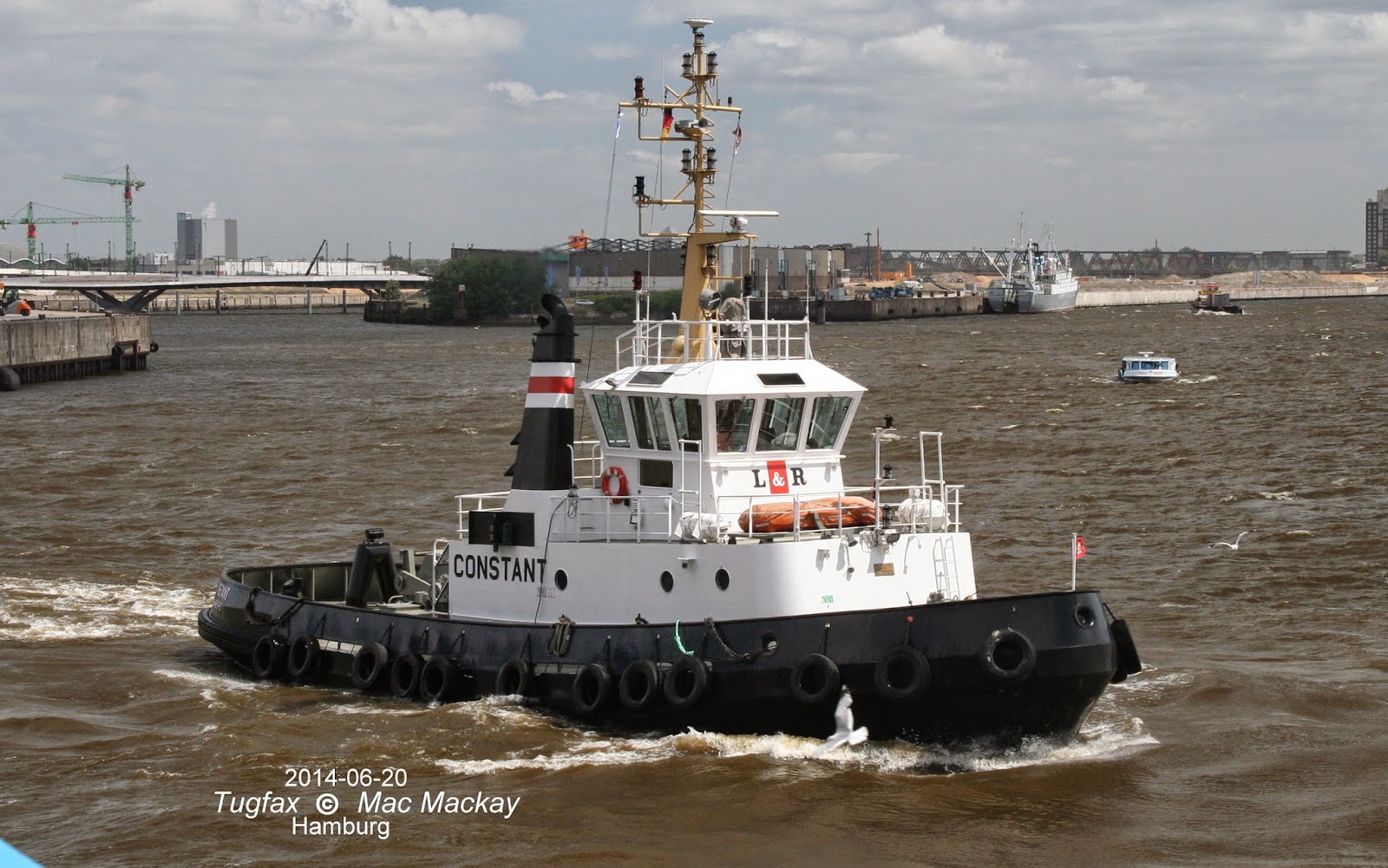 Lutgen+Reimers' Constant was the final tug in the line, and is similar to Bugsier 18. Although its skipper was a little less daring in close quarters work, he was no slouch in the rolling department. 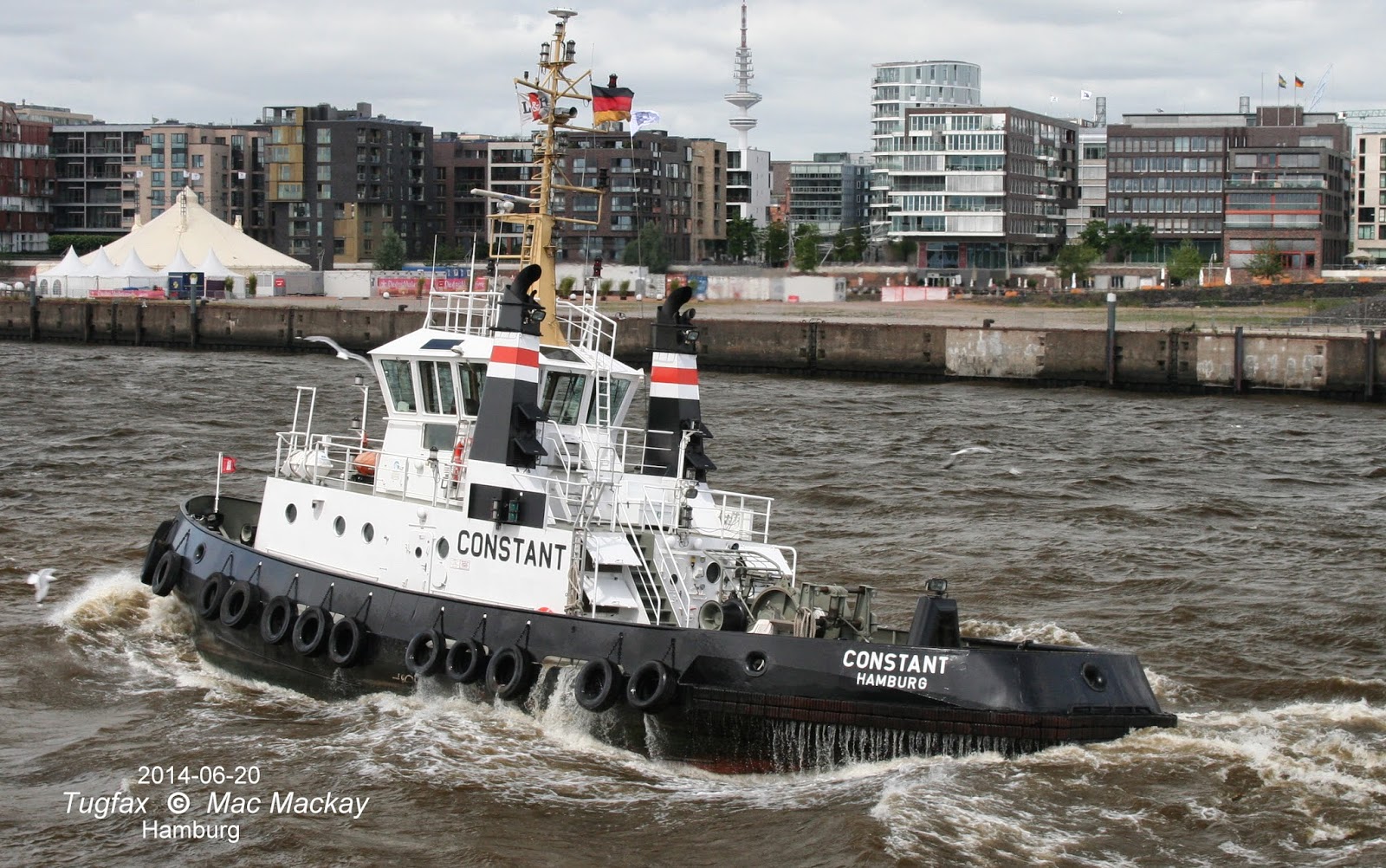 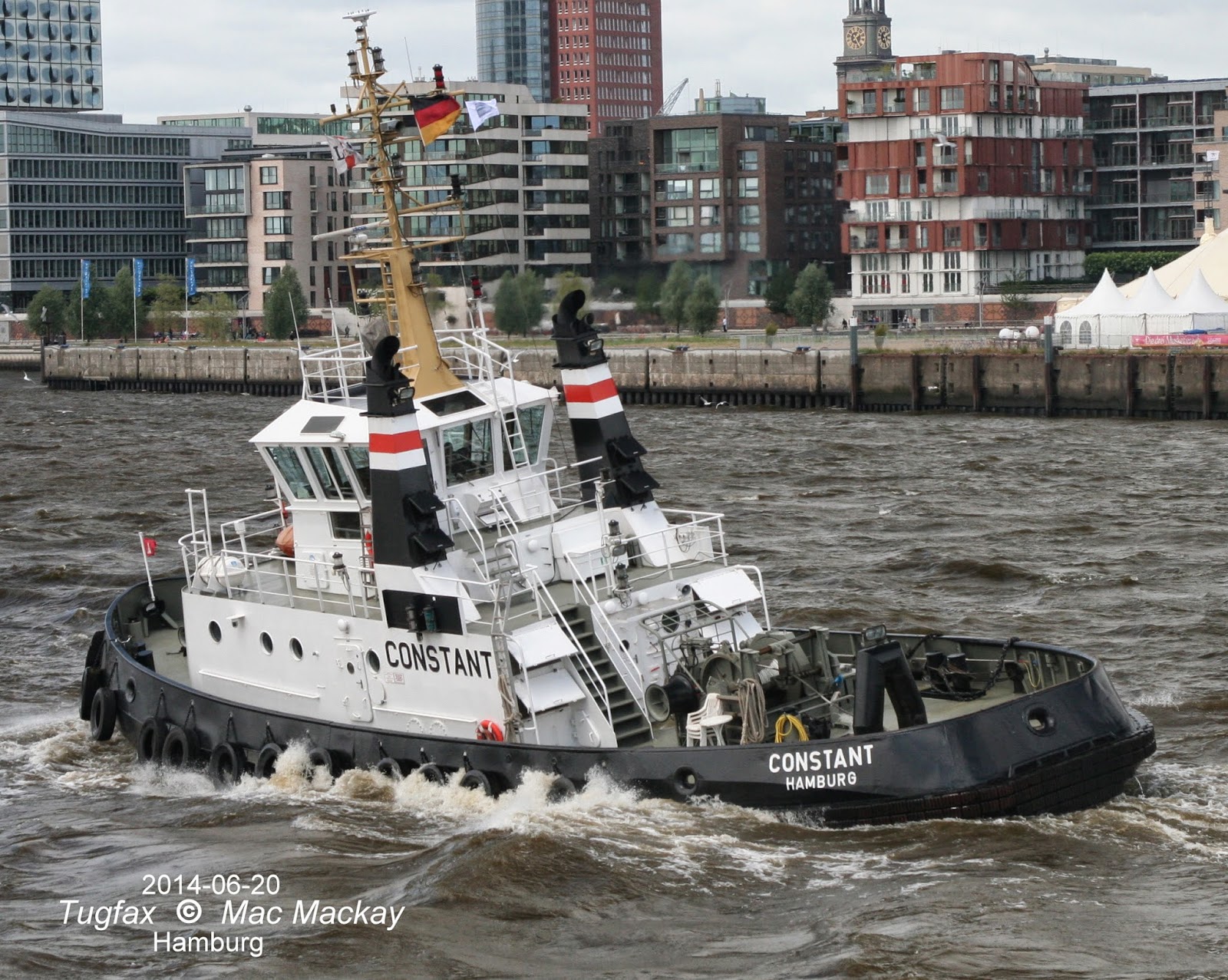 From our vantage point aboard a harbour tour boat, which was also the centre of the ballet's focus, we got some very tight views of tugs in action: 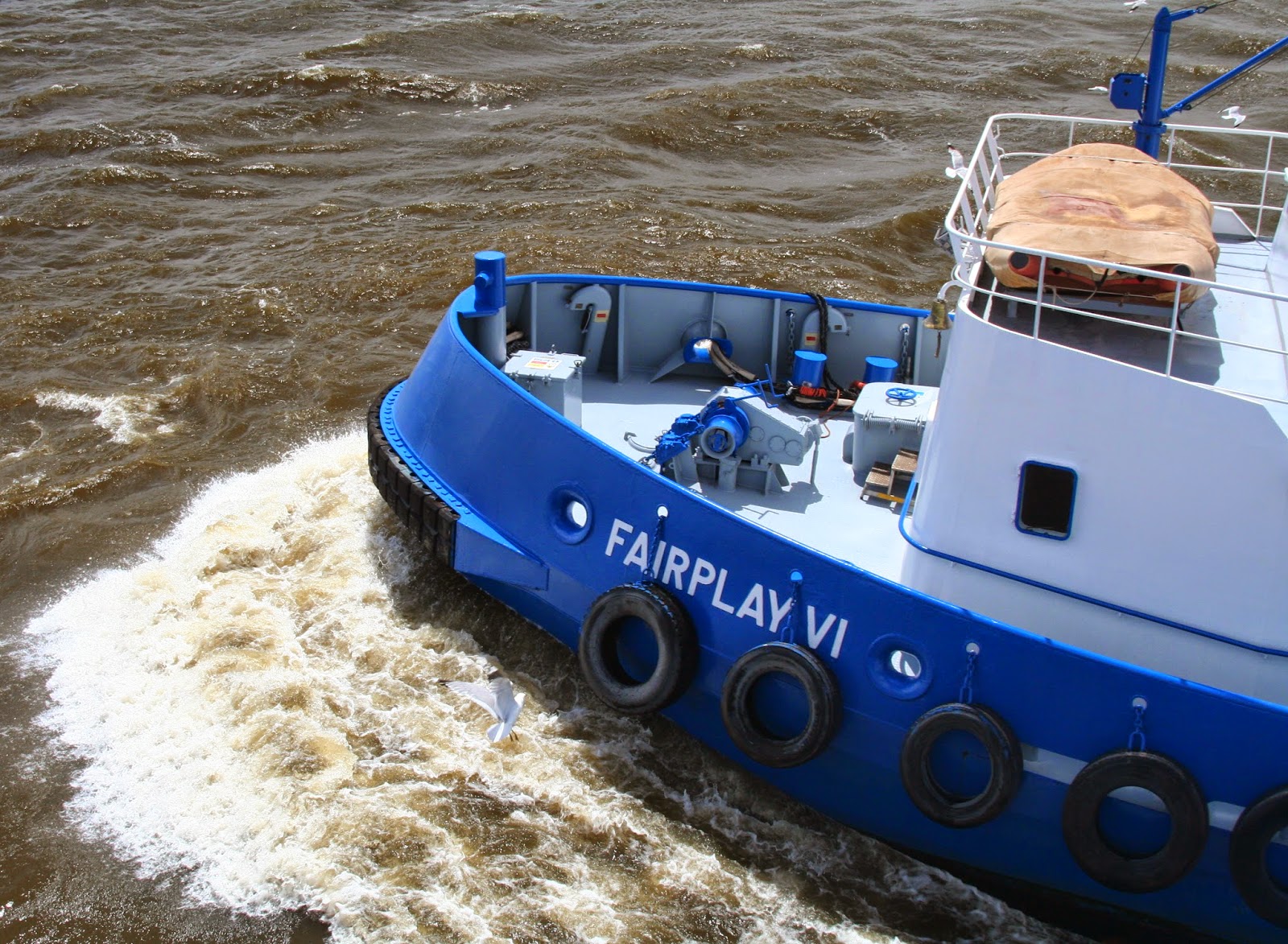 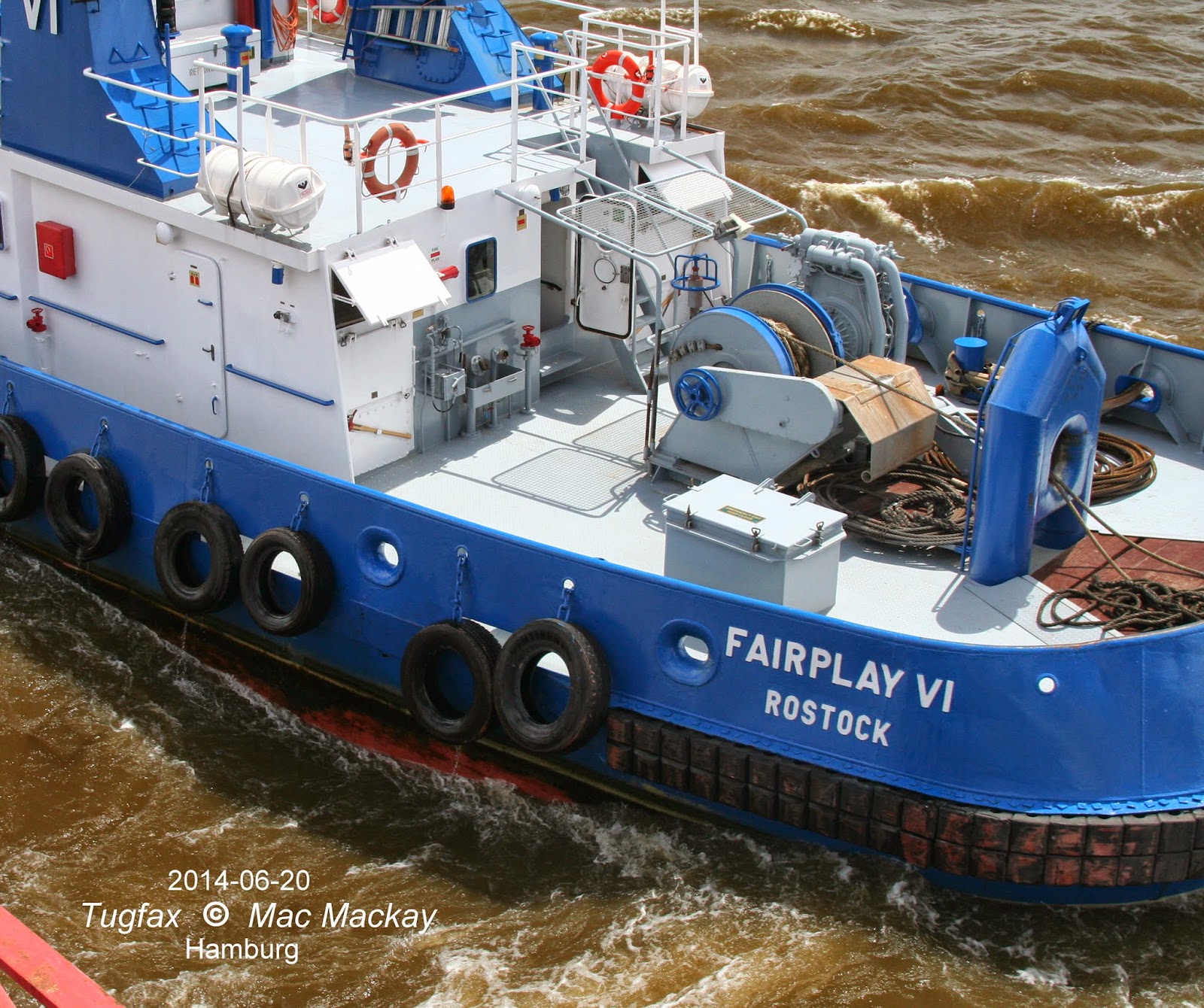 All the tugs in the ballet were tractors, and thus work over the stern for ship handling. Despite being in absolutely pristine condition, they are working tugs. Typical of tugs everywhere, they eave the deck door open for ventilation, despite the safety board warnings about downflooding in emergency situations. 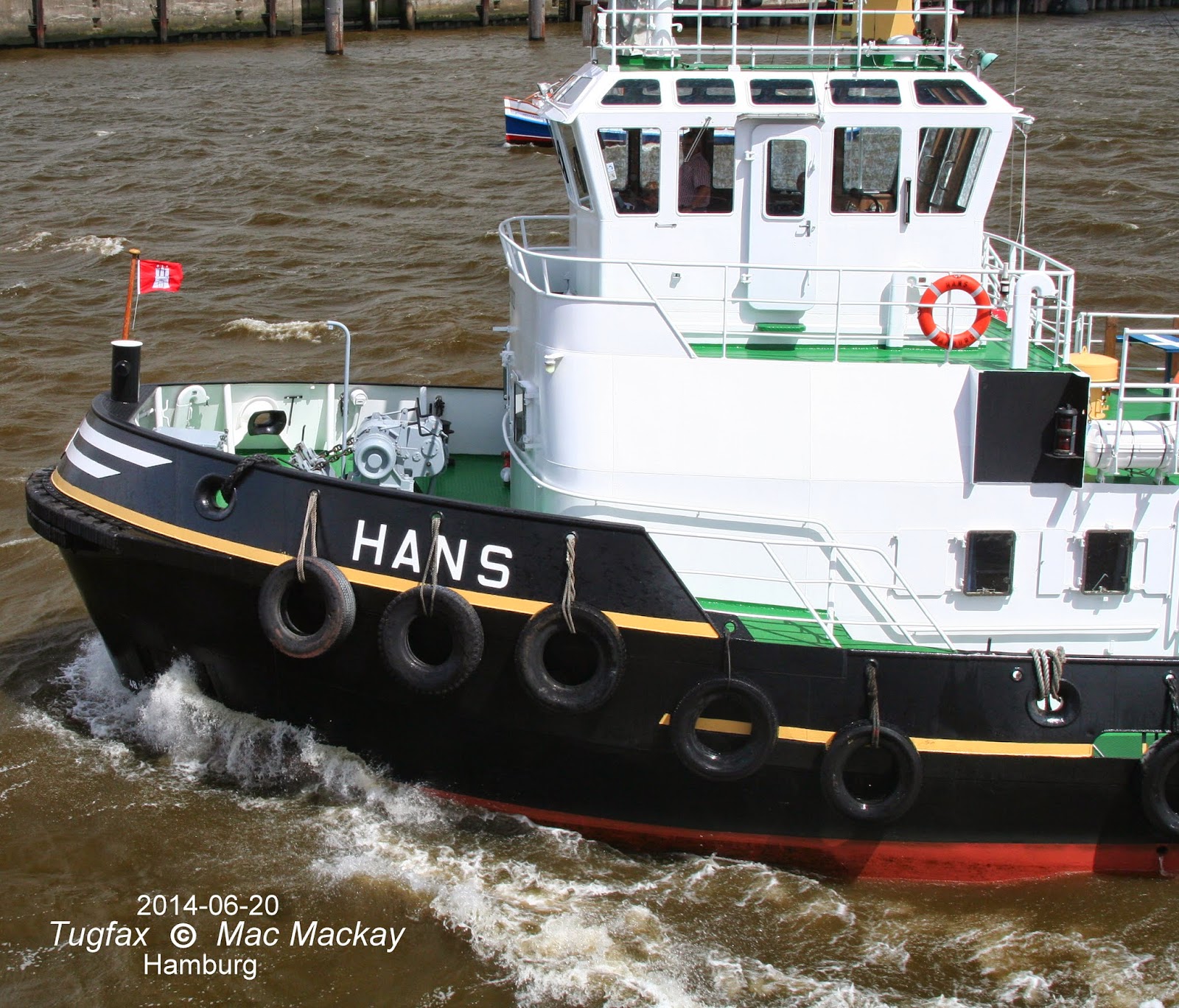 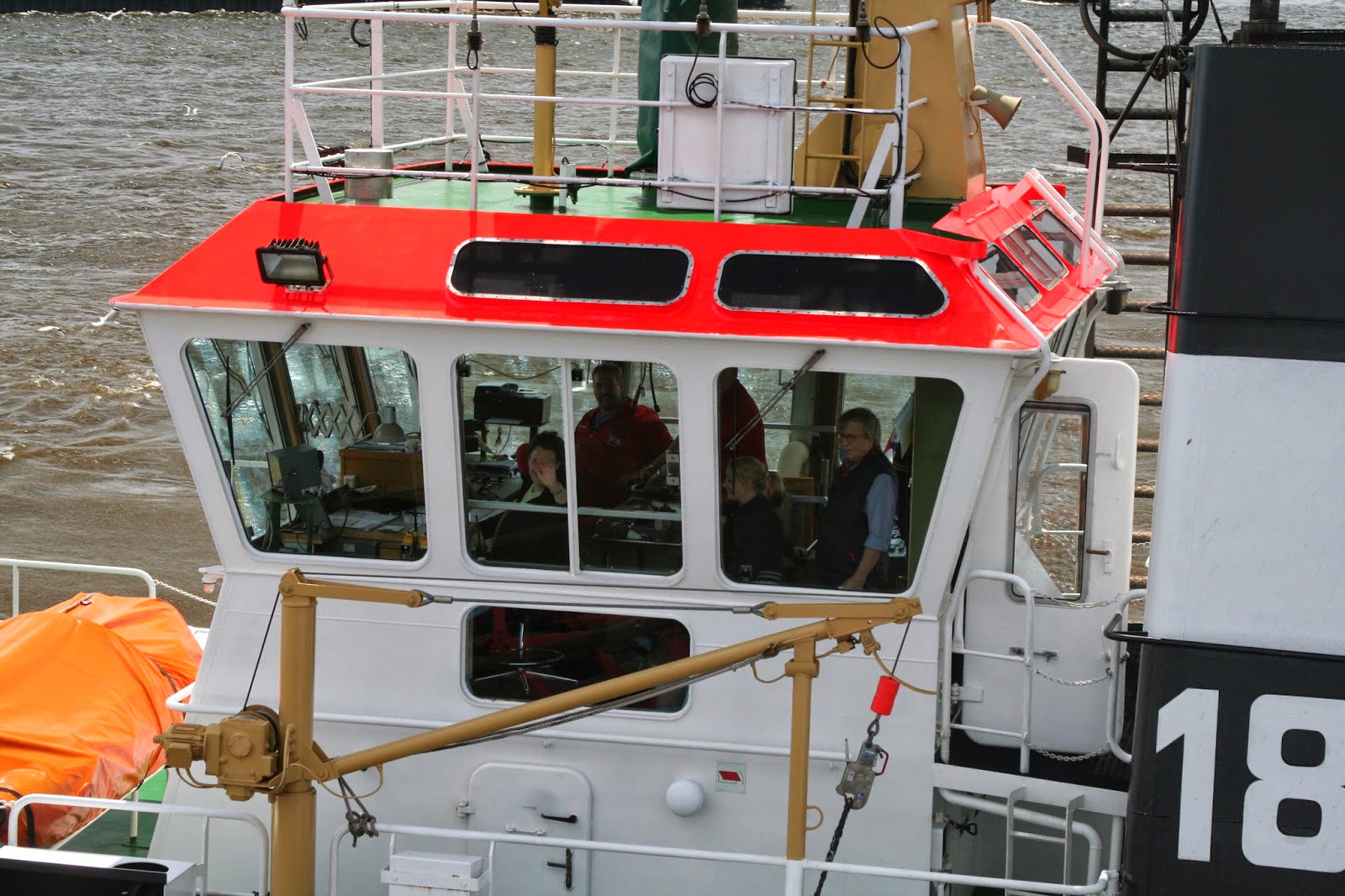 No doubt the tugs are maintained to an extra high order for their ballet performances, but all the tugs in Hamburg appear spotless.Look at the glistening metal trim around the upper windows! 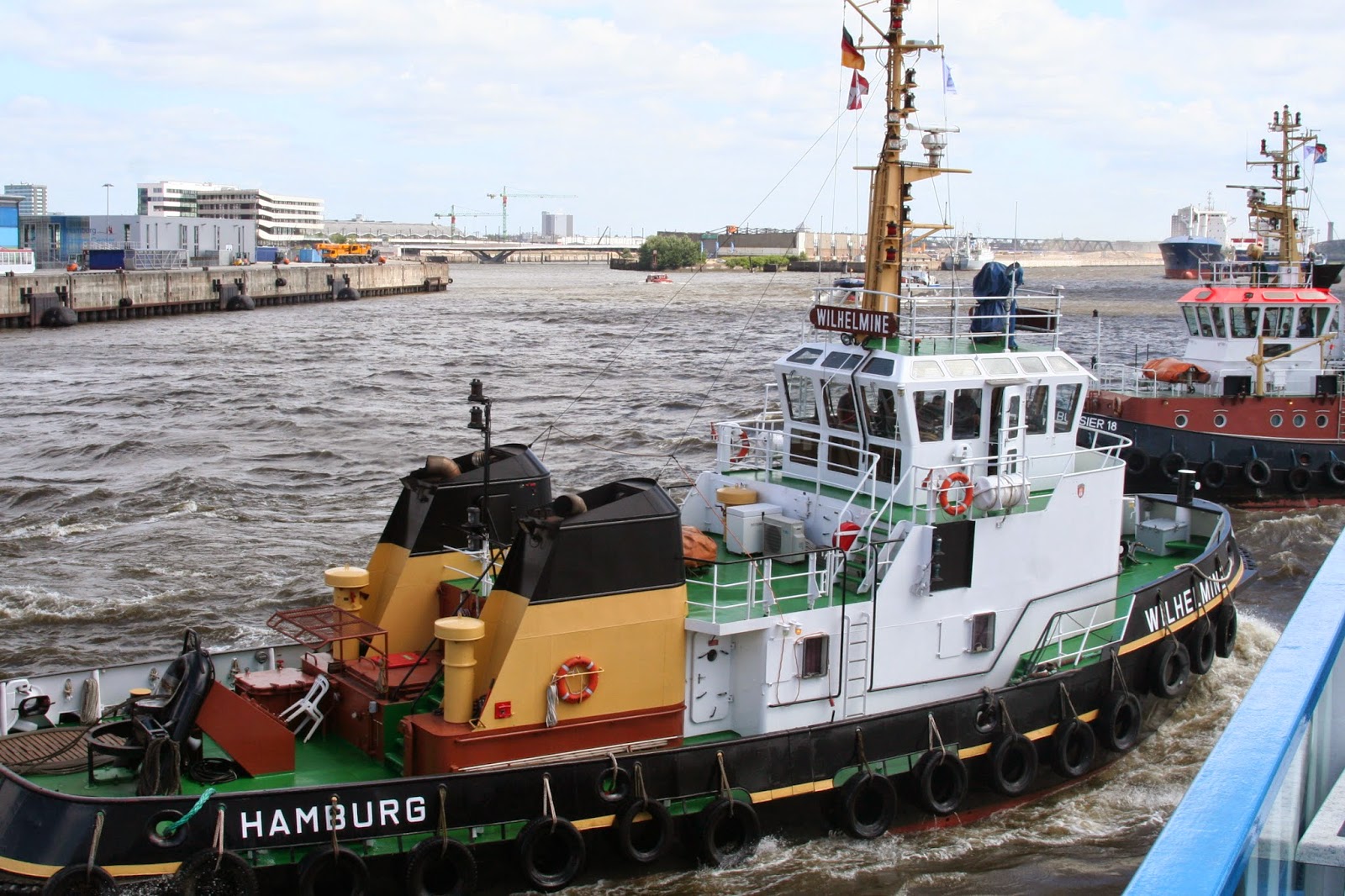 They are also impressively handled by their skilled skippers.

Within an hour of the performance, Constant was back at work. Despite their age, ranging from 22 to 34 years old, and relatively low bollard pull of 27-41 tonnes, there is lots of work for these older tugs in Hamburg. Vast numbers of small feeder container ships and tankers mix in with the huge container ships and bulkers that also visit the port, and use large and newer tugs. More on those later.

At pier 9 this morning, the hull of the McNally Construction tug J.F. Whalen is awaiting arrival of its superstructure.

One of two tugs built by Chantier Naval Forillon of Gaspé, it measures 13.58 gross tons. With two screws and 700 bhp it was registered in Toronto on March 31. After trials in Gaspé, the two tugs were then delivered to McNally.  Sister tug D.L. Stanyer  went west by truck, and this one has now come east.

Trucking the tugs was entrusted to Earl Paddock of Stoney Creek, ON, a company that also specializes in transporting military vehicles. 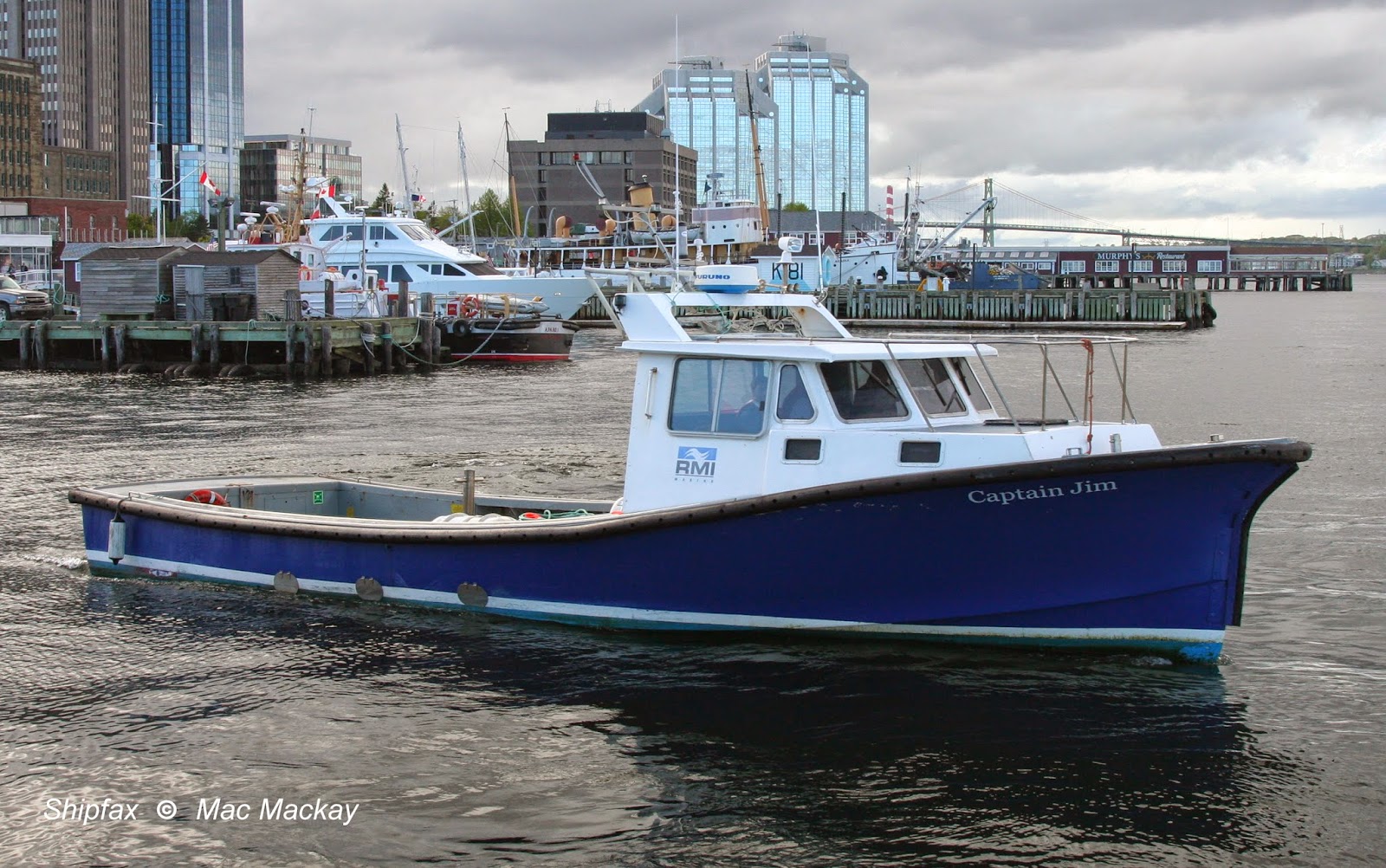 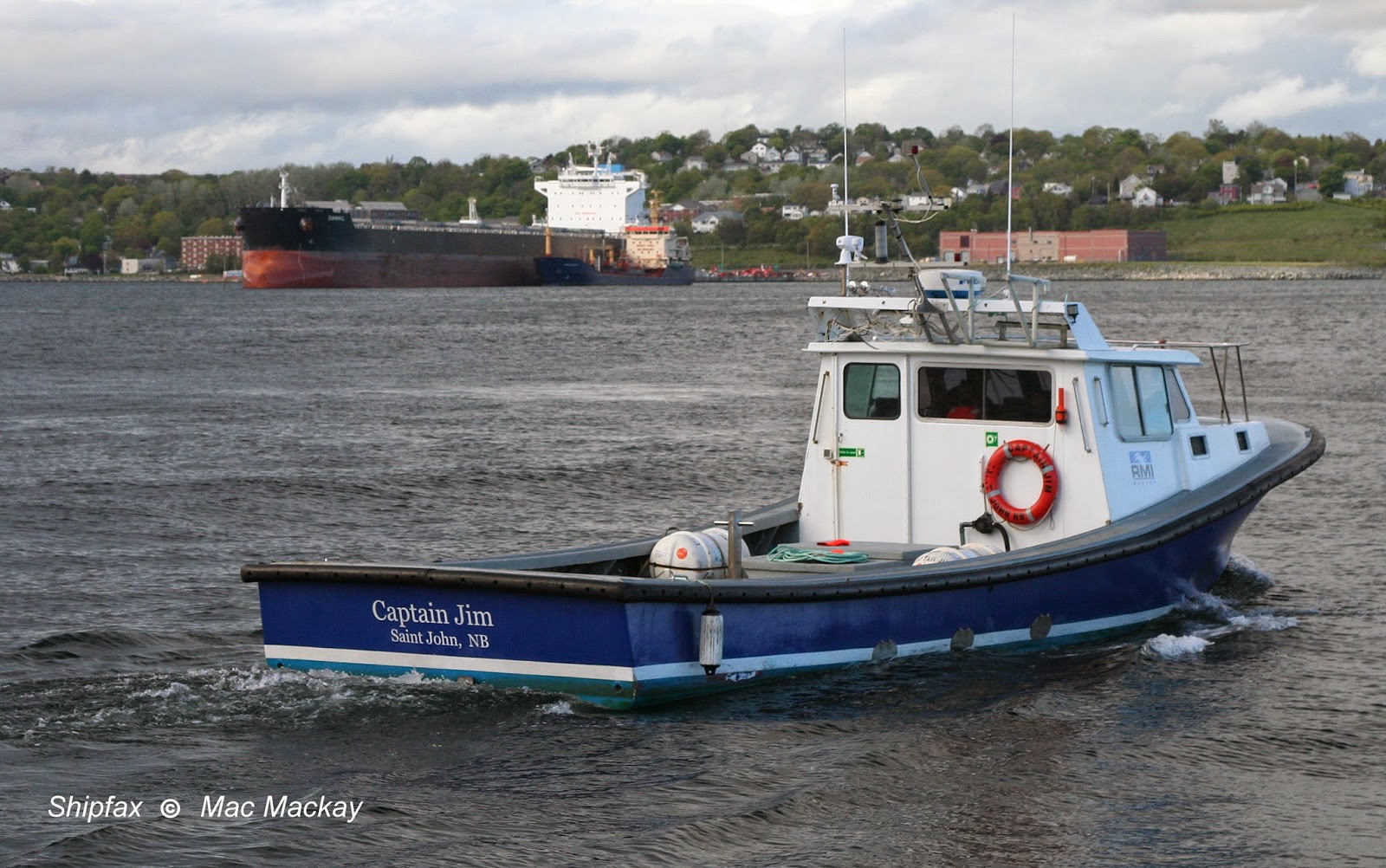 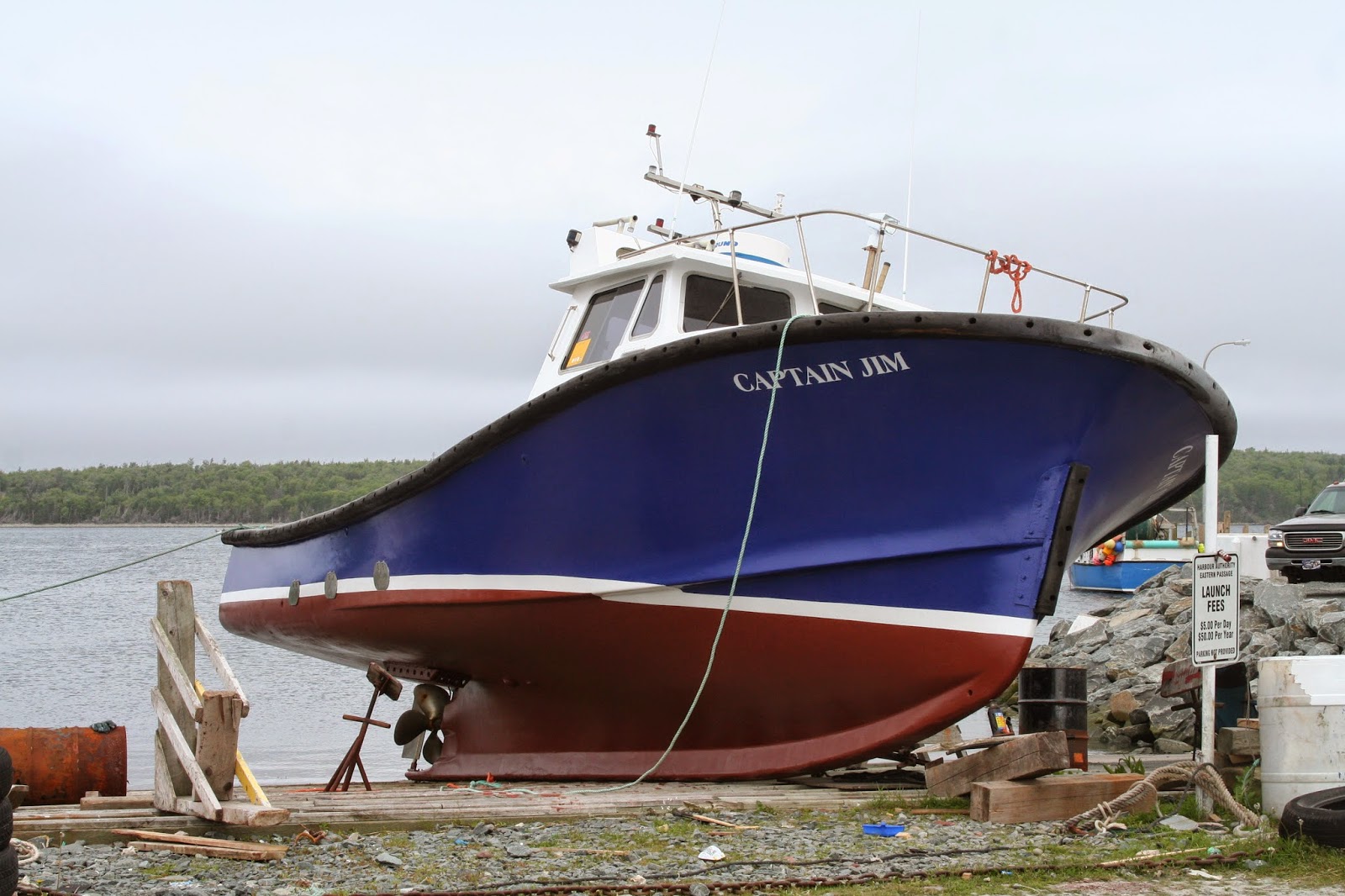