Saint class tugs of the RCN - from the oldies department -CORRECTED

The Royal Canadian navy built three seagoing tugs in the 1950s with the intention of providing towing services for their larger ships. A large class of Royal Navy tugs built in the World War I era were named after Saints, and the RCN repeated that .
There was not much work for the tugs, and they spent most of their time towing gunnery targets. 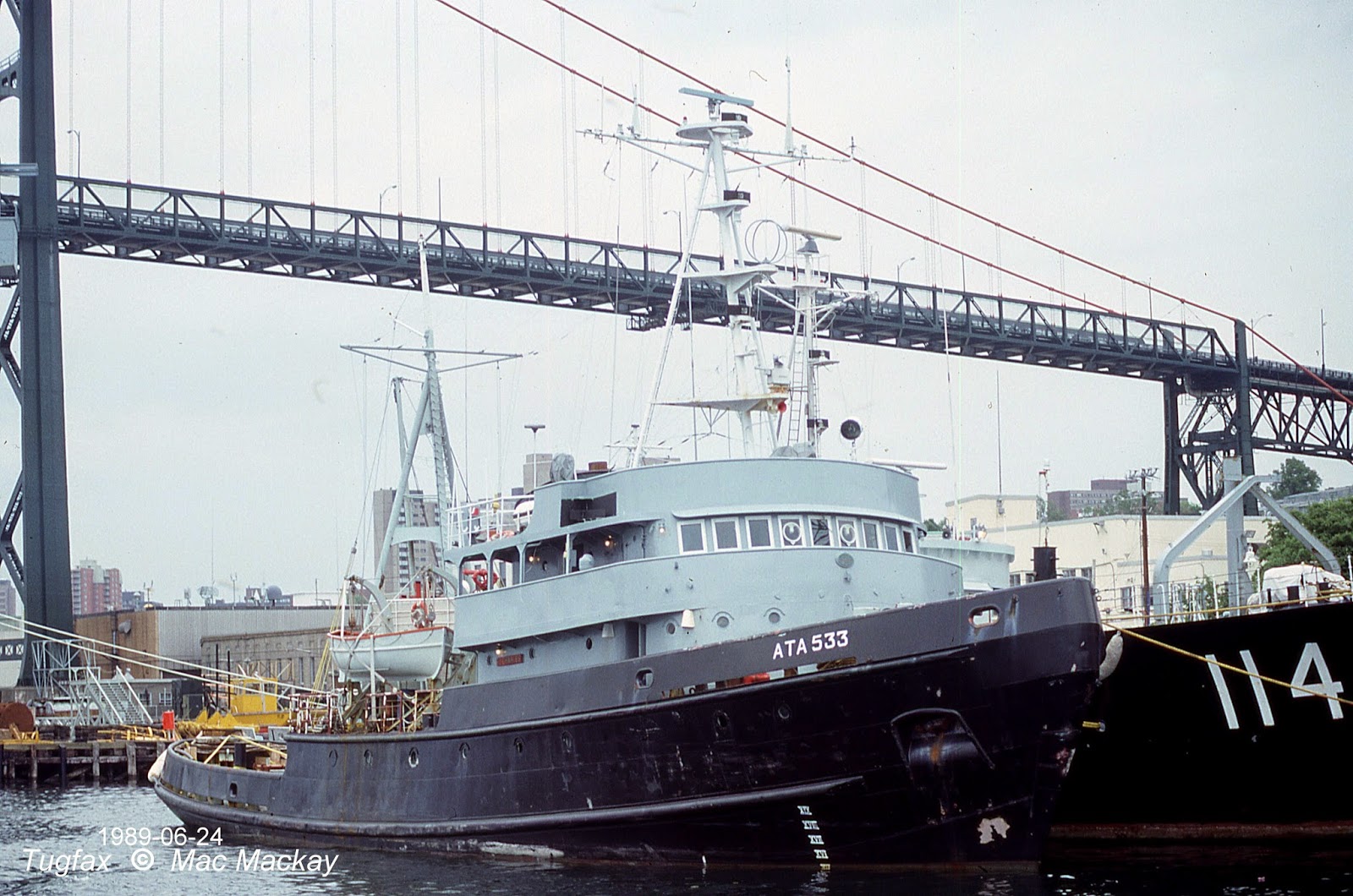 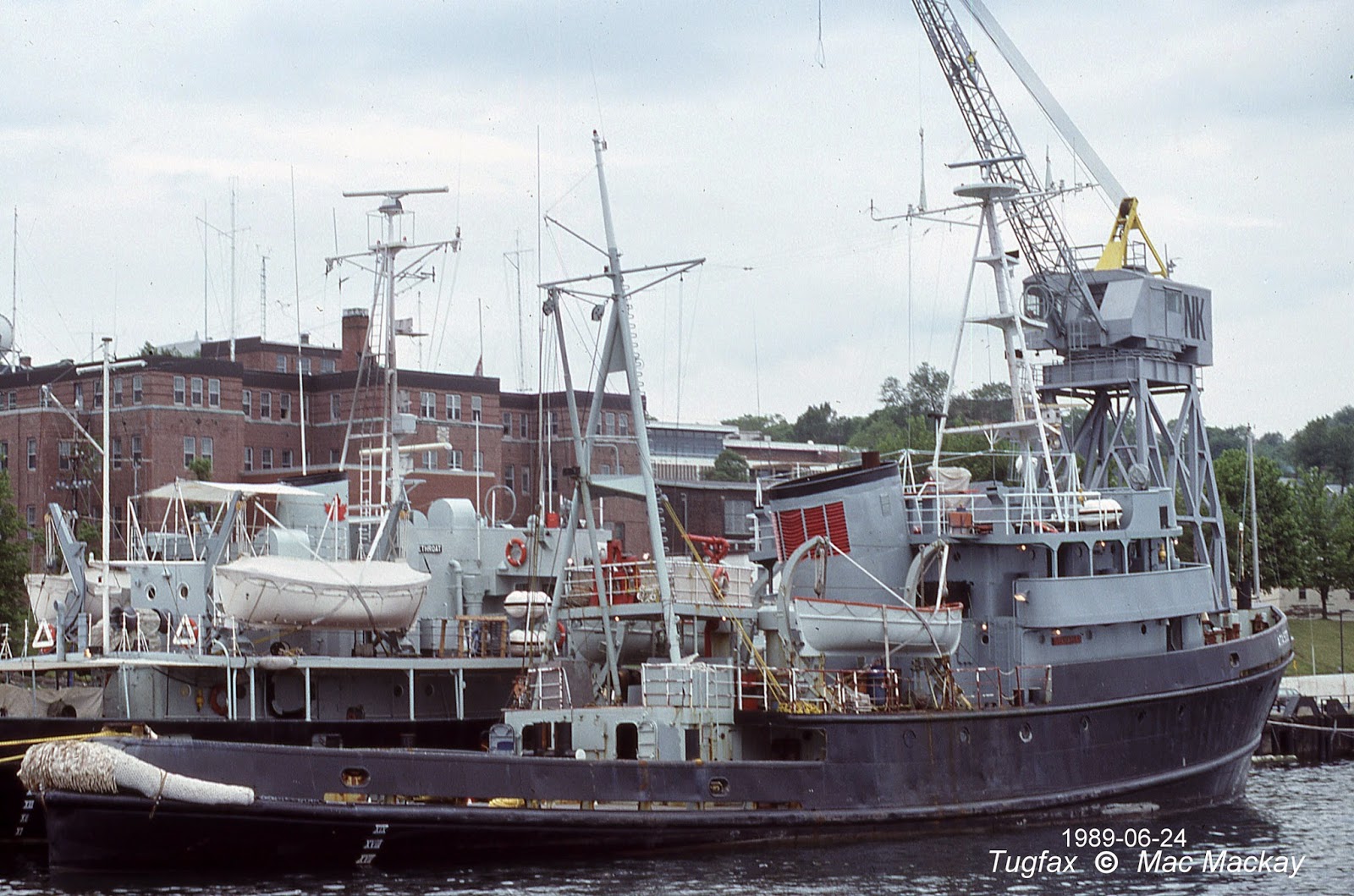 St.Charles alongside Bluethroat at Jetty Kilo in HMC Dockyard. Note the large rope pudding on the stern.

St.Charles was built in 1957 by Saint John Dry Dock + Shipbuilding Ltd. It was powered by a single Fairbanks Morse engine of 1950 bhp, driving a single open controllable pitch propellor. 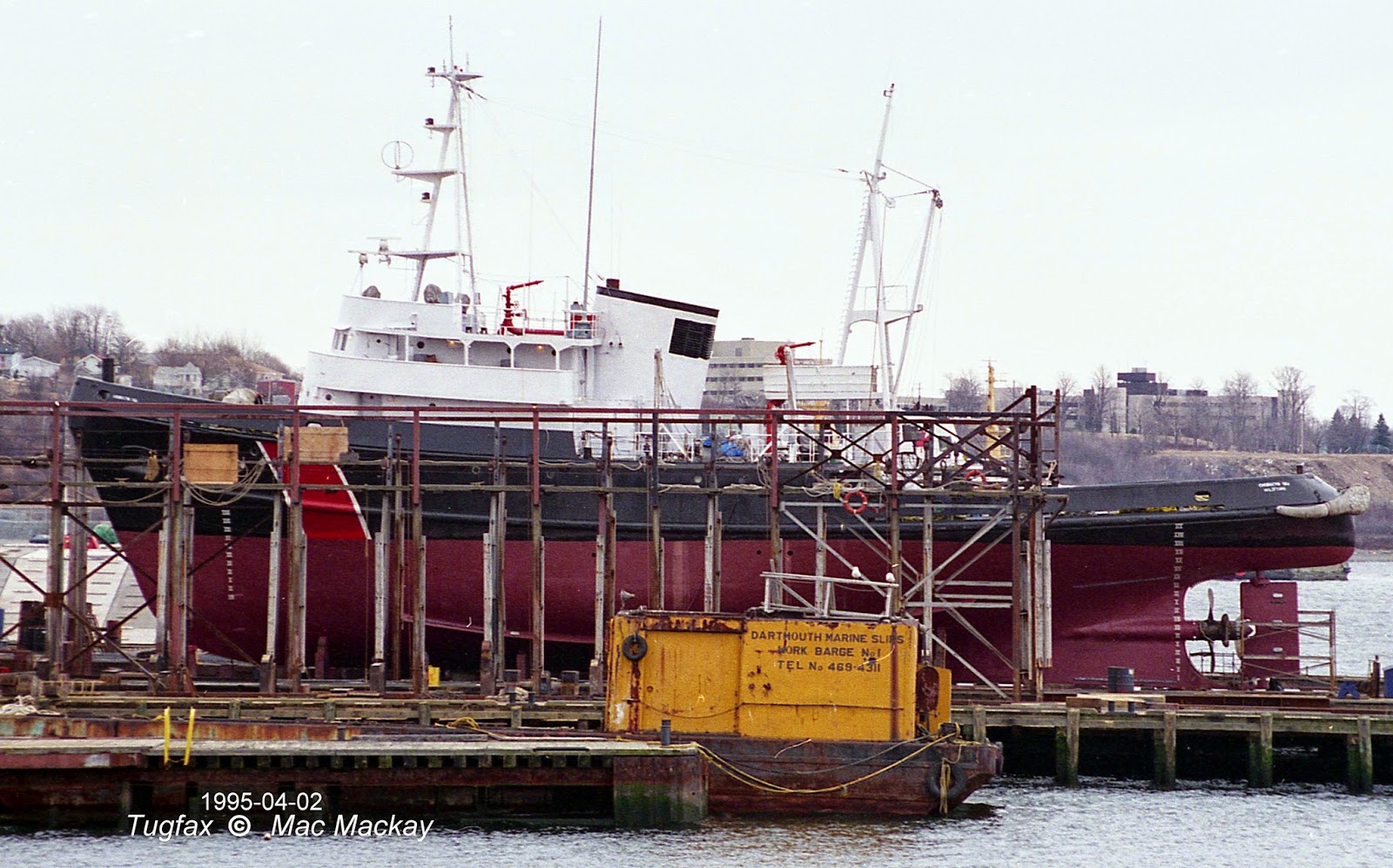 In 1994 Secunda Marine Services bought the tug and refurbished it at the Dartmouth Marine Slips and alongside in Halifax. The tug had never been registered before and therefore had to meet Department of Transport regulations at that time. 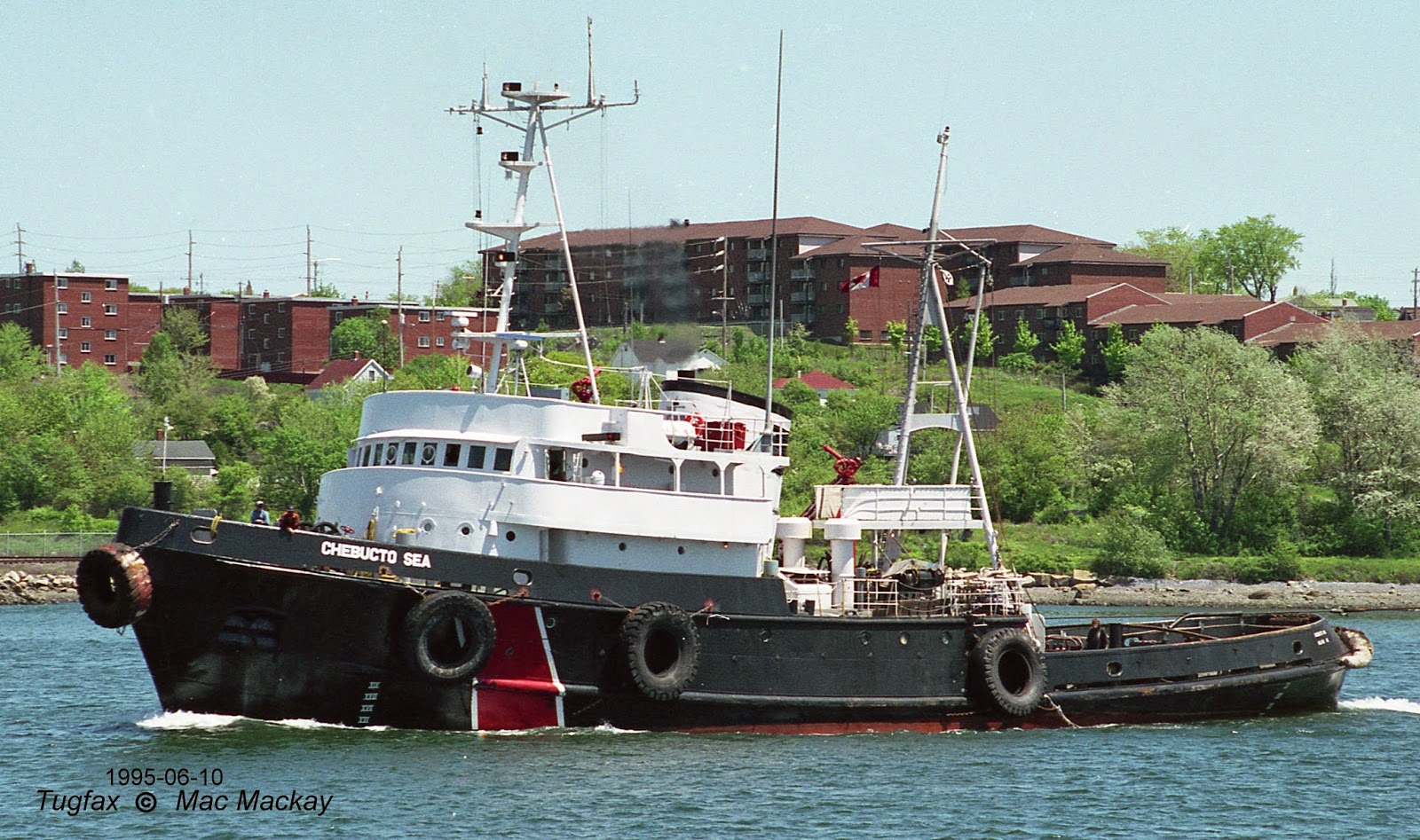 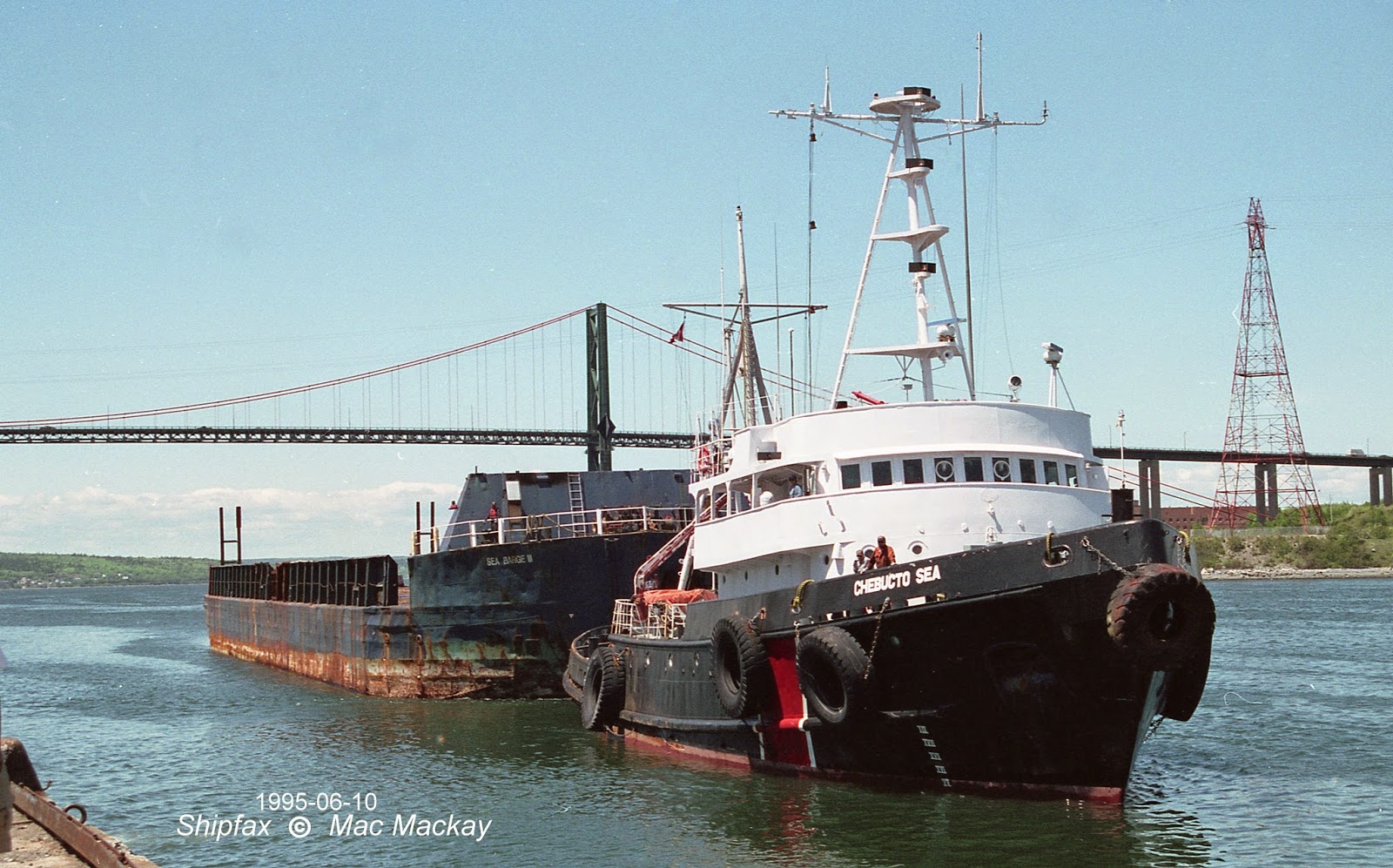 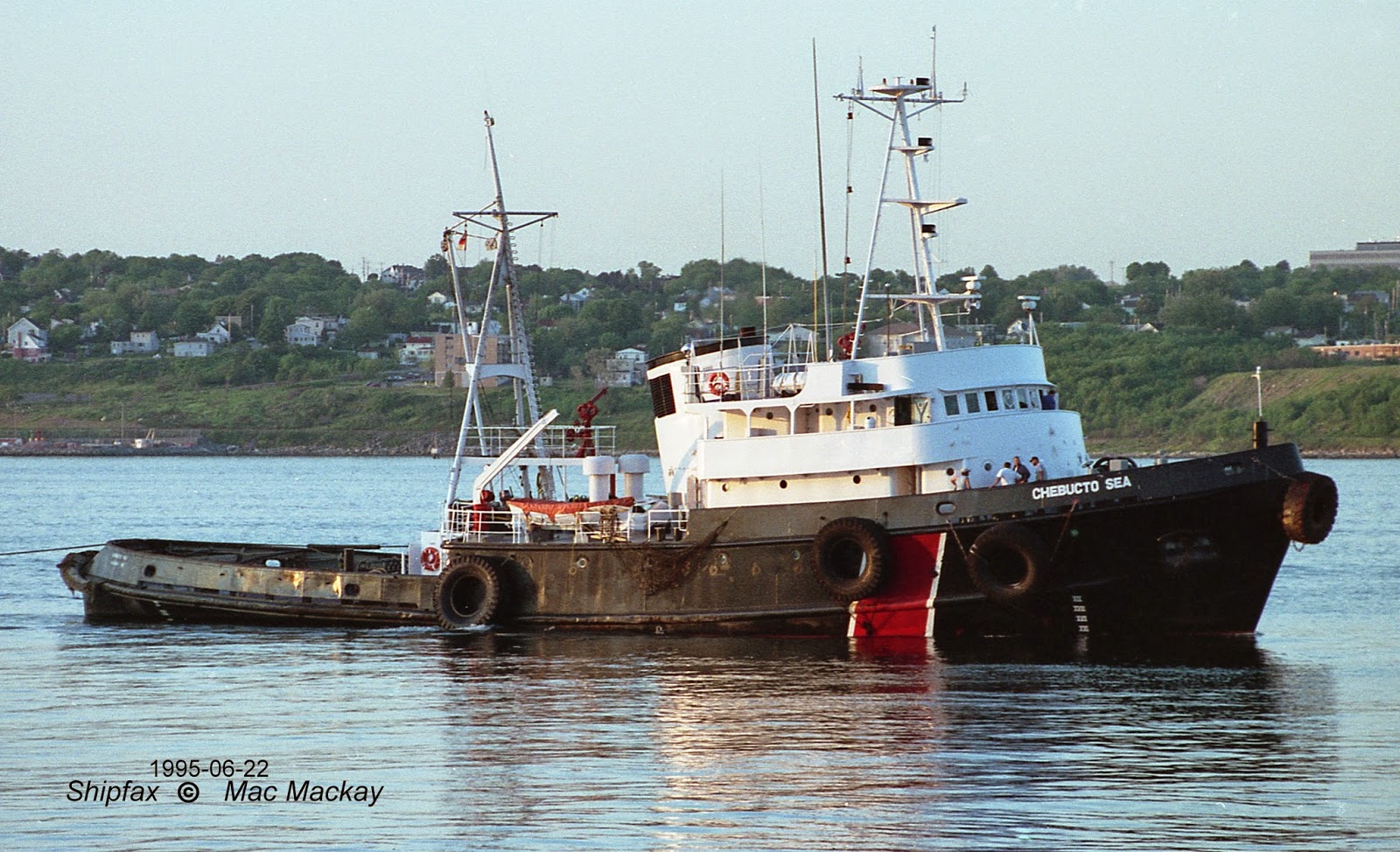 Secunda replaced the wooden lifeboats in davits with a new boat and a derrick.

They found work for the tug using company barges and in 1996 they bareboat chartered the tug to carry pulpwood. in Quebec.In 1996 the tug ran aground near Rimouski, QC and was taken to Ile-aux-Coudres where it was found that the propeller blades were damaged.It also sent a Mayday on October 1998 when it was drifting off Corner Brook, NL. 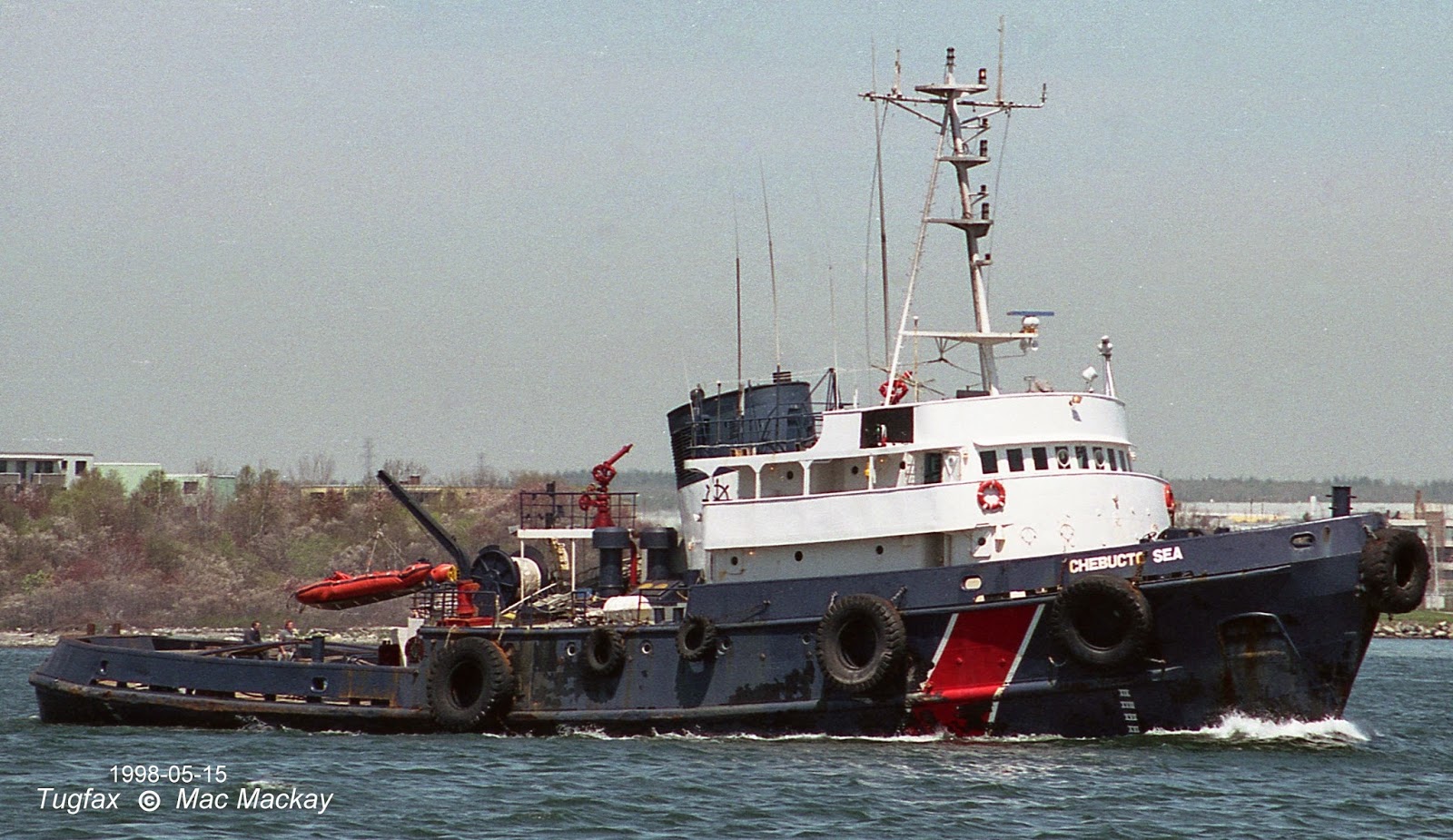 Later in its career with Secunda the tug lost its after mast and derrick. The wide blue top band on the funnel surmounted Secunda's ships wheel symbol. 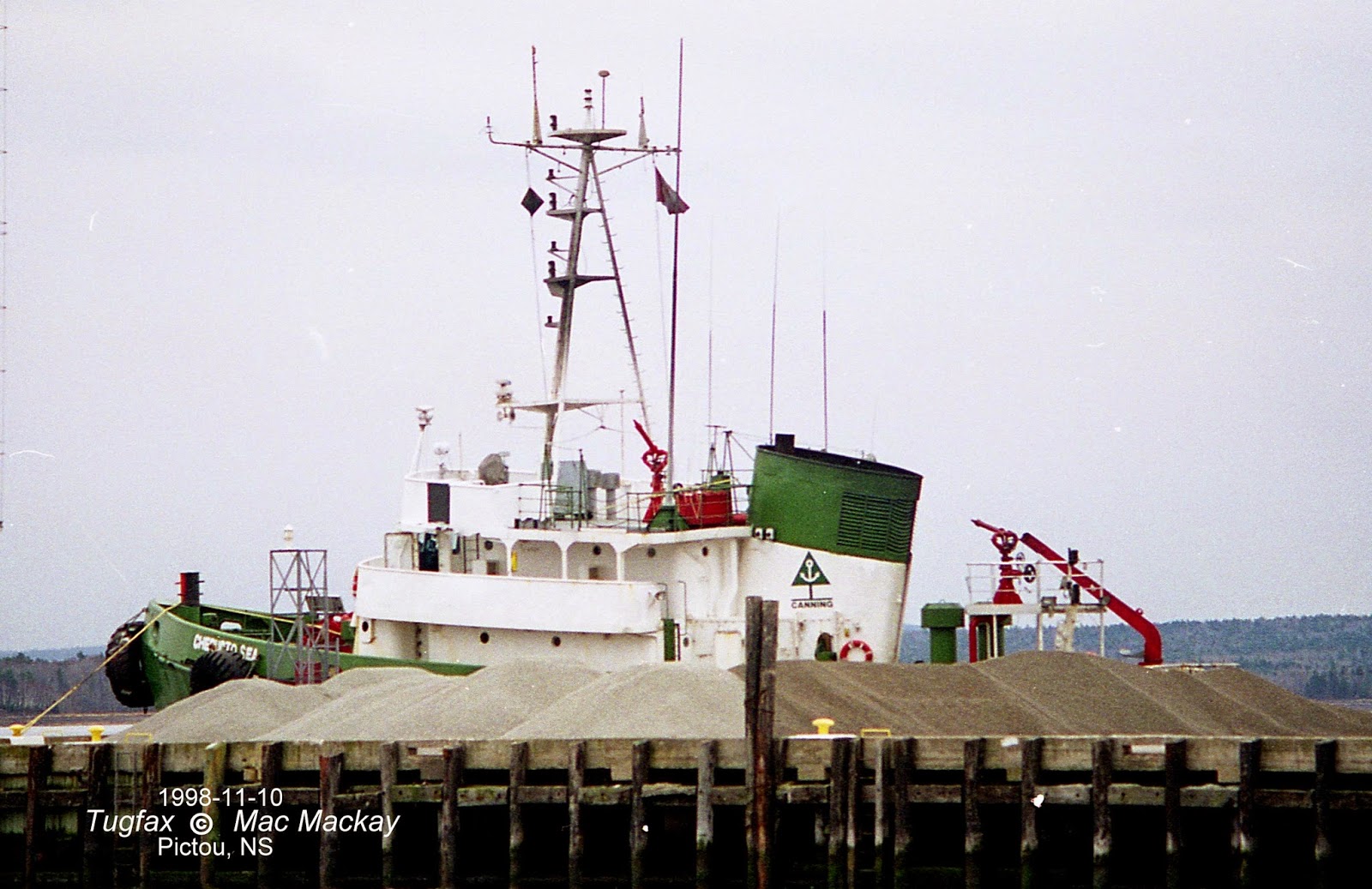 The bareboat charter to John E. Canning Ltd of Georgetown, PE, resulted in Canning painting the tug in its own green colours. It continued to carry pulpwood and gravel. On May 28,1999 the tug lost power off Stephenville, NL and it was found that its tail shaft had broken and the the prop was lost. In October Tignish Sea towed the tug back to Halifax and it was laid up.

An insurance claim worked its way though court until 2005 when it was settled in favour of Secunda.
[Read the Appeal court decision here: http://www.shippinglaw.ru/upload/iblock/f61/2006nsca82.pdf ]
Point Halifax towed it to Liverpool for another refit, but following that it was laid up again in Halifax.

In 2008 it was offered for sale, with the not that is controllable pitch function was not working.  In 2009 a Newfoundland company bought the tug and used Keewatin to tow it to St.John's where it was renamed Matterhorn. To my knowledge the tug was never in service, and its registration was suspended in July 2014.

Chebucto Sea also assisted in bringing the distressed bulker Amphion into Halifax. The ship's crew abandoned the vessel in early January 900 km east of Newfoundland. The ship was loaded with iron ore and was taking water from suspected hull cracks. Secunda signed a salvage contract and their tug Tignish Sea managed to board a riding crew, and take the ship in tow to Halifax. Chebucto Sea assisted in the last day of the tow, arriving in a snow storm February 3. 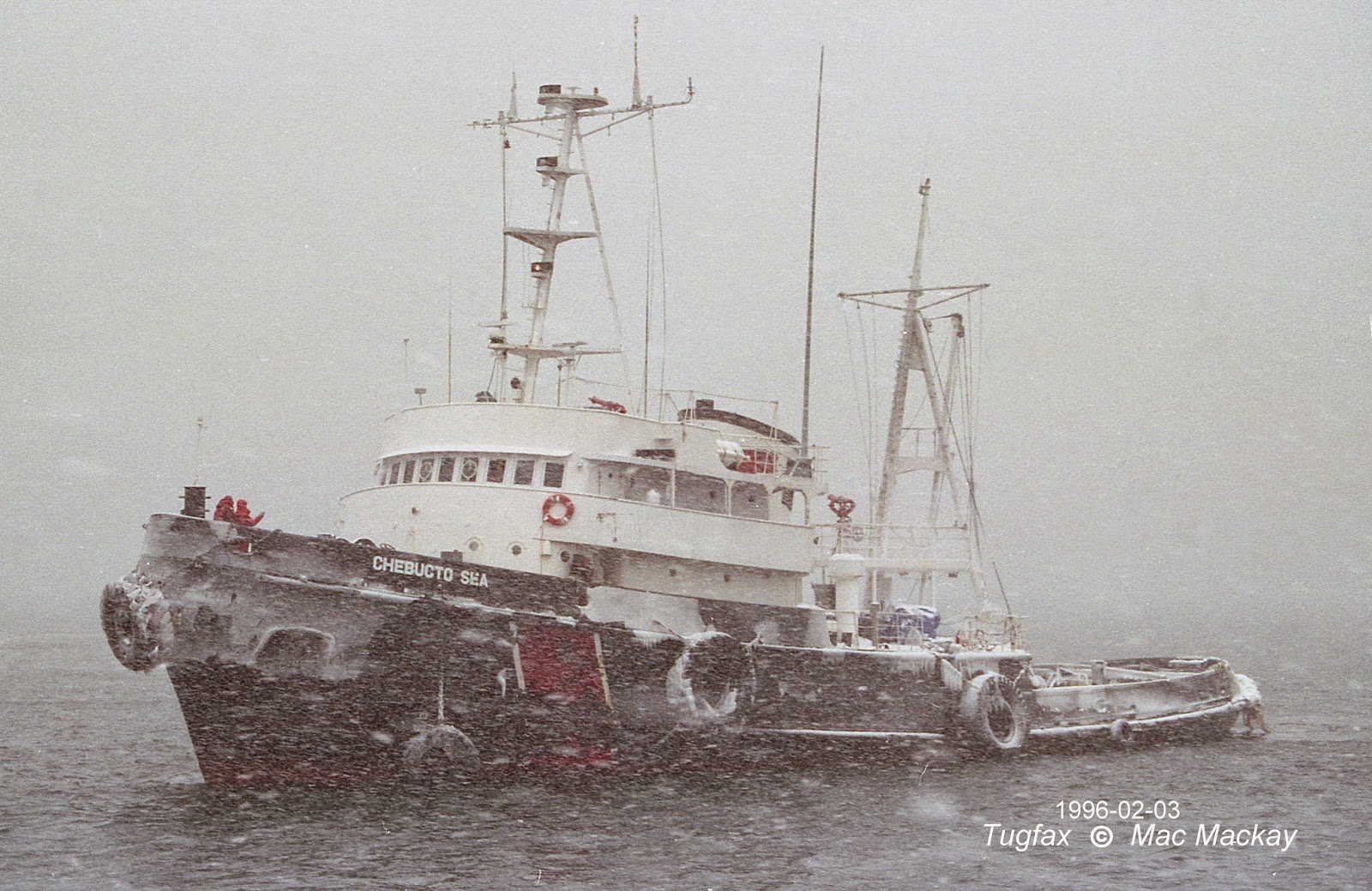 Not a great day to be a deck hand. Note one of the tire fenders has come adrift.

There have other references to this incident in Tugfax see: 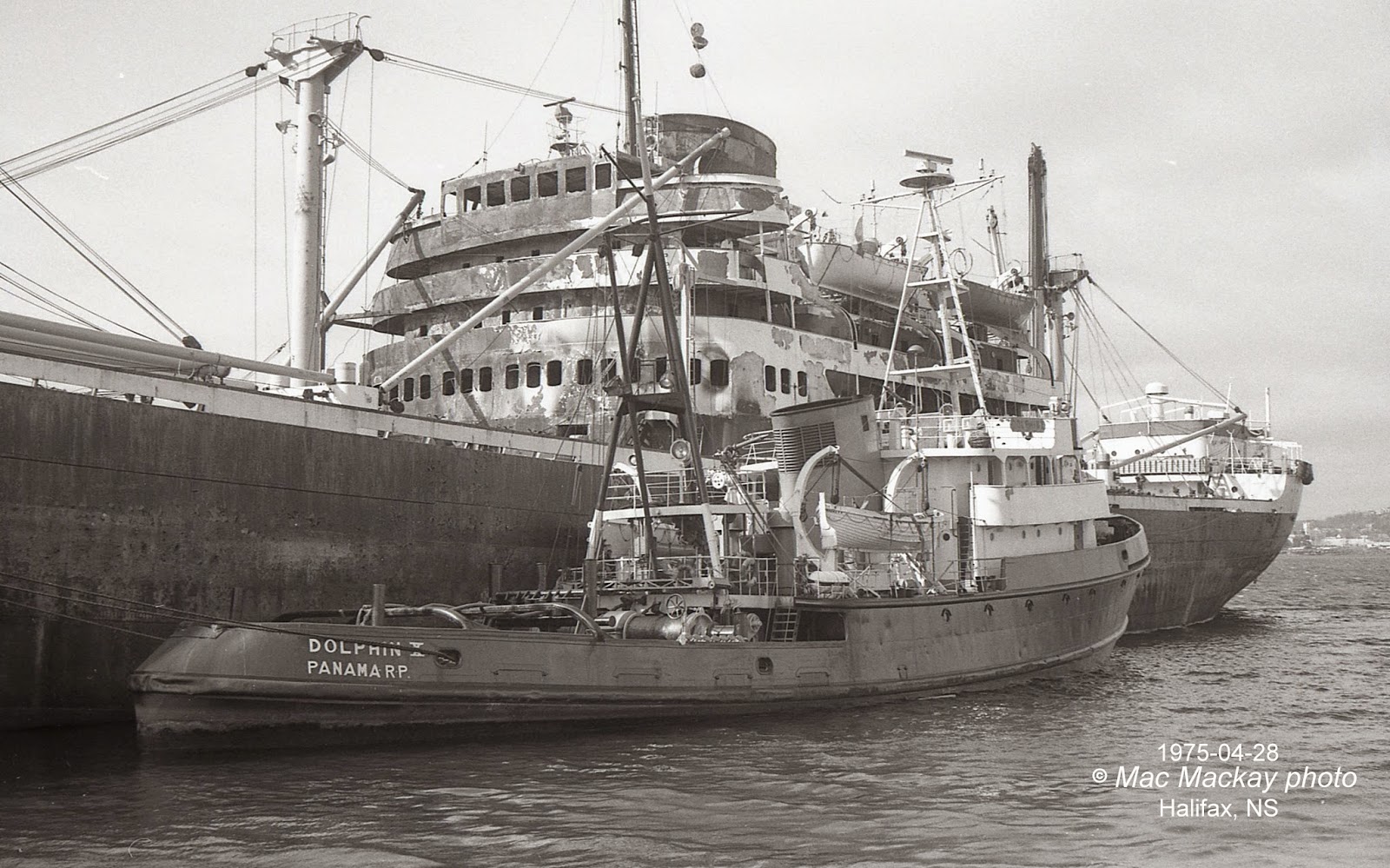 It was put to work for new owners Eckhardt+Co of Germany and towed several ships across the Atlantic to scrap yards in Santander , Spain, including the burned out Amvourgon shown above. In 1967* it had the distinction of towing the VLCC Metula to Santander. It was the first VLCC to be scrapped.

On November 27, 1980 it sank off Labrador while towing a barge.Although I don't have details, it is likely that it had a similar problem with its tail shaft.

ST. ANTHONY
Also built at Saint John in 1957, and based at the RCN base at Esquimault on Vancouver Island. 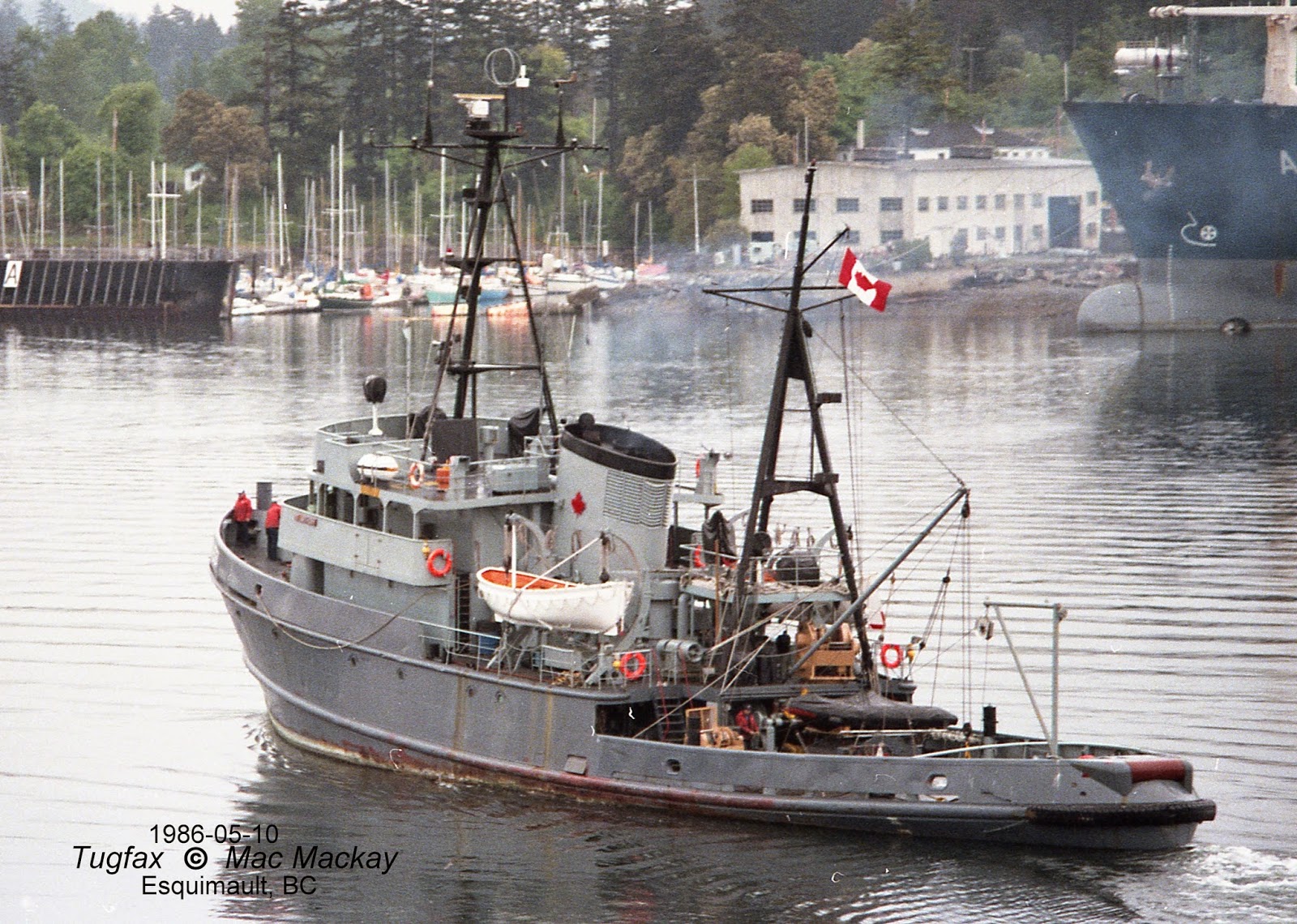 It was sold to US owners in Seattle area, but doesn't seem to have entered commercial service and was donated to a religious group in 2001. In 2009 it became Longhorn I owned in Texas, so it may be operational even today.

CORRECTION:
It was pointed out to me that I made typo here: the date should be 1976.
The reason for the scrapping was that the ship Metula had grounded in Magellan Strait, Tierra del Fuego in 1974, while en route from Saudi Arabia to Chile with a cargo of crude oil The ship was holed, creating a major oil spill and resulting in sever damage to he sip, including flooding the engine room. The ship was eventually freed by salvors, but was declared a constructive total loss. It was renamed Tula for the trip to the scrappers.
Posted by Mac at 1:28 PM No comments: 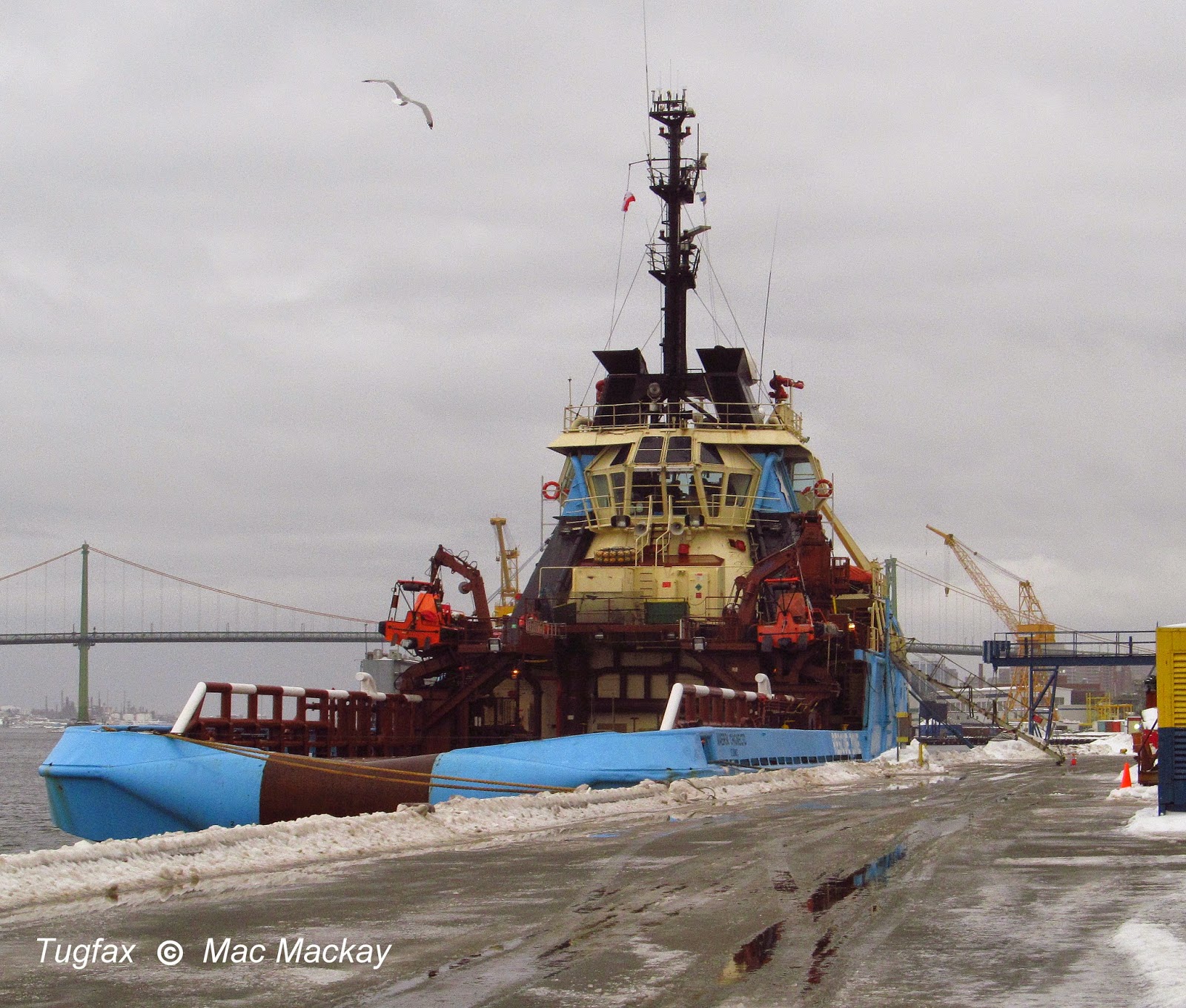 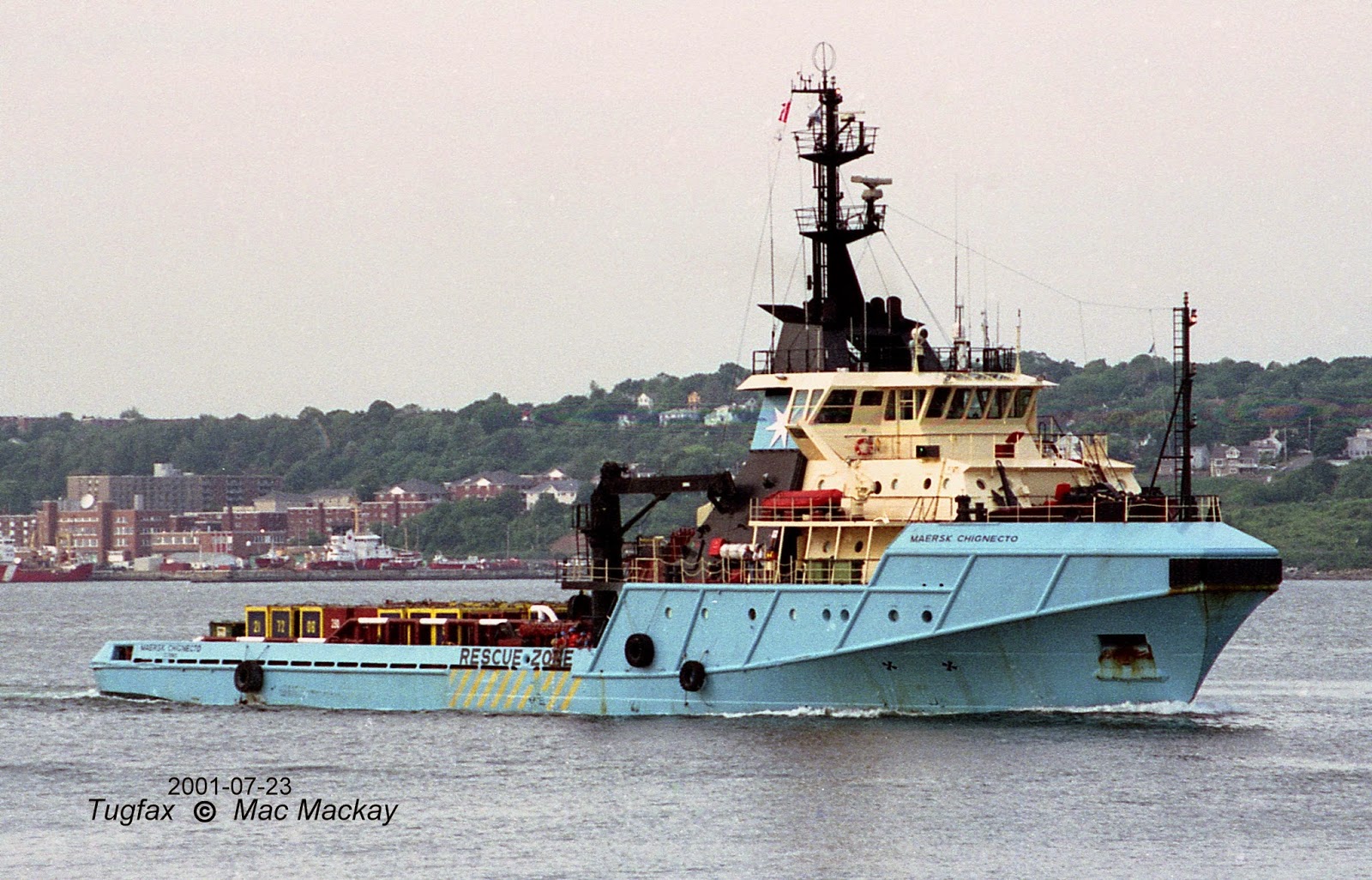 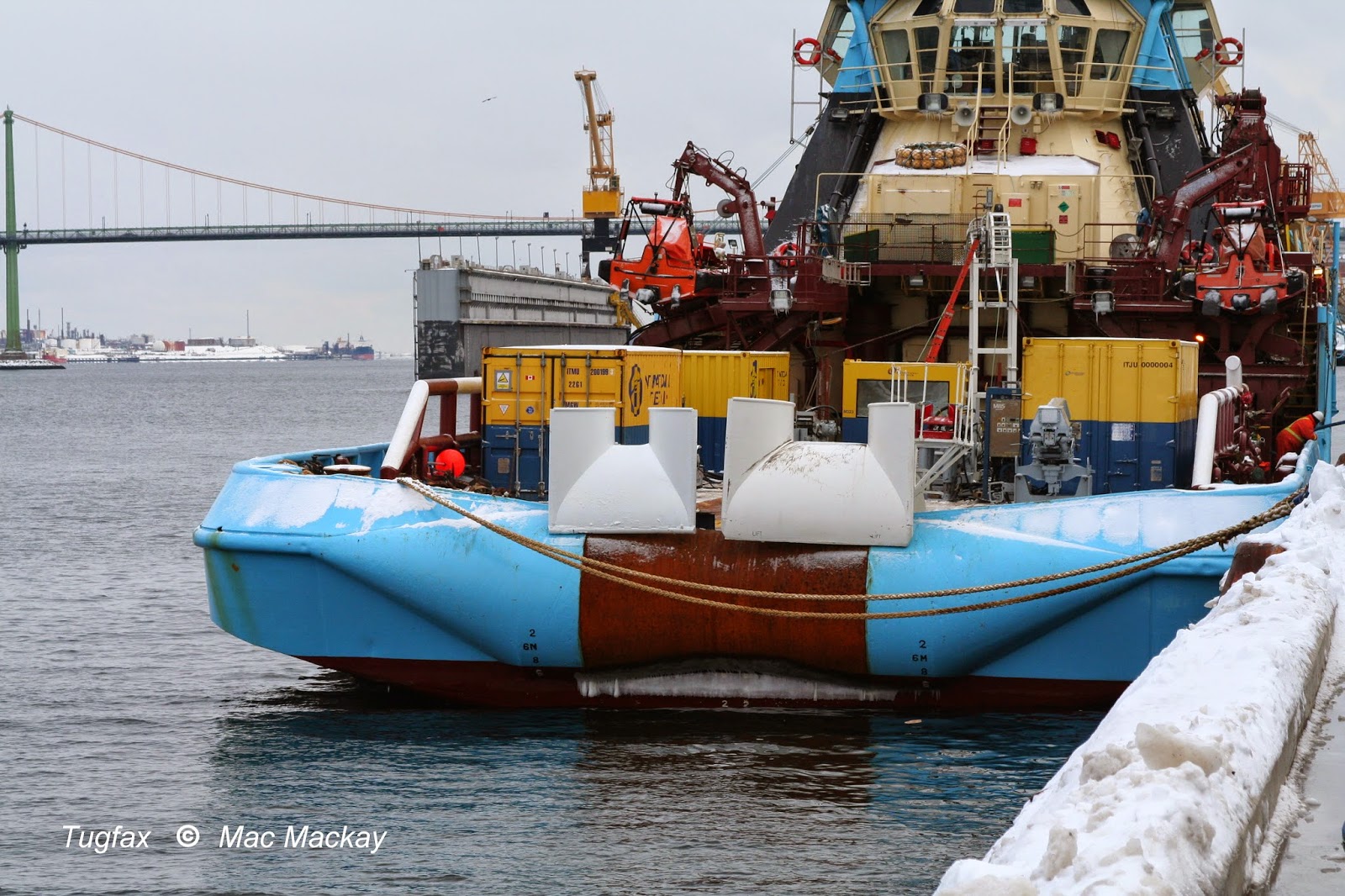 An interesting tug was built in 1928 by Davie Shipbuilding + Repair in Lauzon, QC. It was built for Anticosti Shipping Co, and as the owner's name would imply it was for service at Anticosti Island. That huge island dividing the St.Lawrence River as it empties into the Gulf of St.Lawrence was rich in timber.
The Anticosti Corp had a major operation on the island, which.involved cutting timer in the winter, floating down rivers to bays, booming and bundling it, then towing it out to the ship Port Alfred. The ship then carried the wood to the Saguenay River port of the same name where Anticosti had built a pulp mill.

Named George M. McKee, the tug was heavily built to work in ice and had a cutaway bow like an icebreaker. Also rare for a tug at that time it had a diesel engine. Its large 5 cylinder Fairbanks Morse was rated at 700 bhp. It carried a crew of fourteen, including a large engine room crew (housed below deck aft). 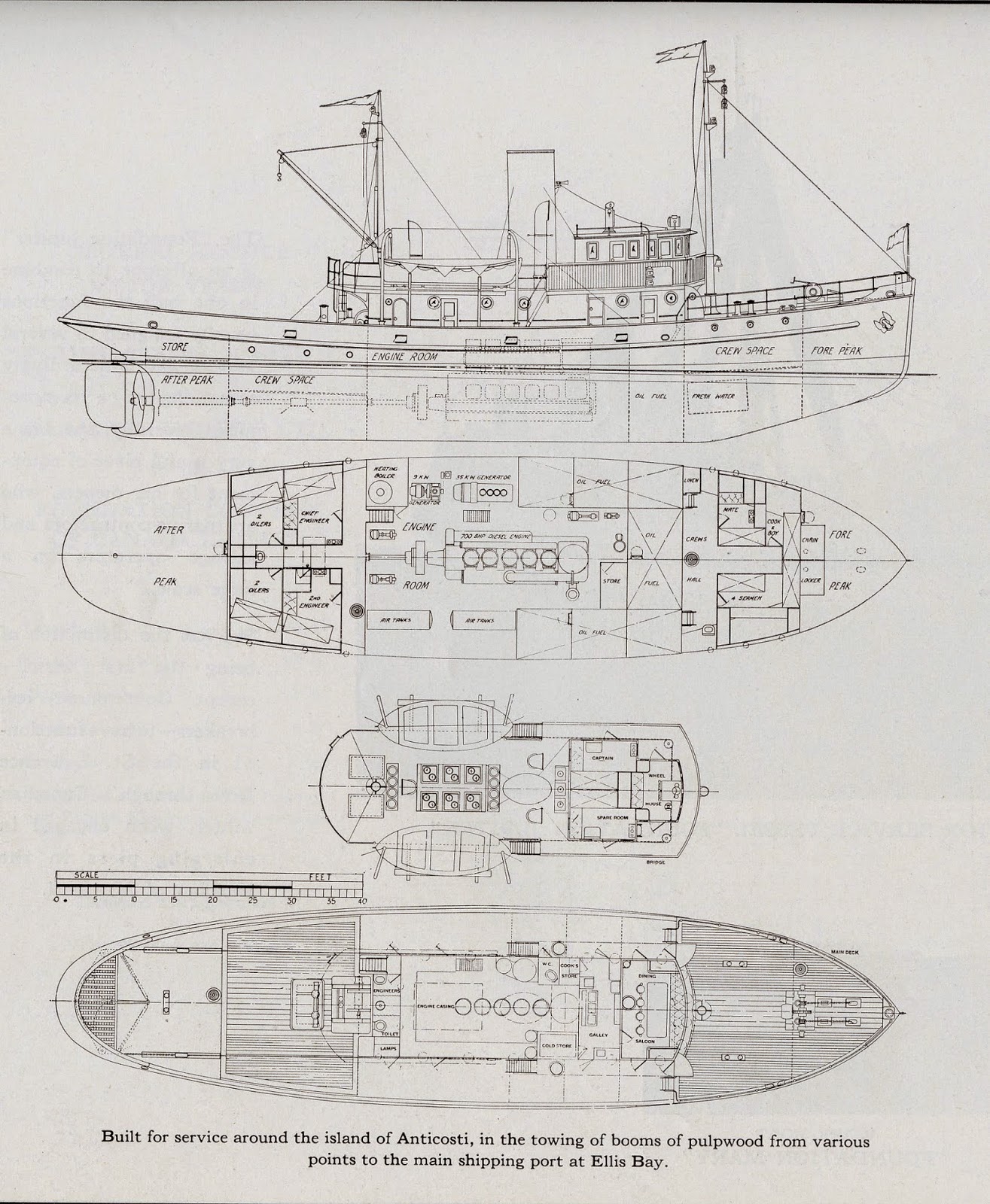 The tug as originally designed by Milne Gilmore and German.

It served the Anticosti Corp until 1933 when it was acquired by Manseau Shipyard, the shipbuilding arm of the Simard family at Sorel, QC. The shipyard was to become Marine Industries Ltd, and they remained owners of the tug until 1970.

I don't know what the tug during the World War II years, but following the war it made many trips to Halifax, Sydney and Shelburne, NS to to tow decommissioned warships to Sorel for scrap.It also made trips to the United Stares east coast, to such places as Camden, NJ - probably towing surplus naval vessels. 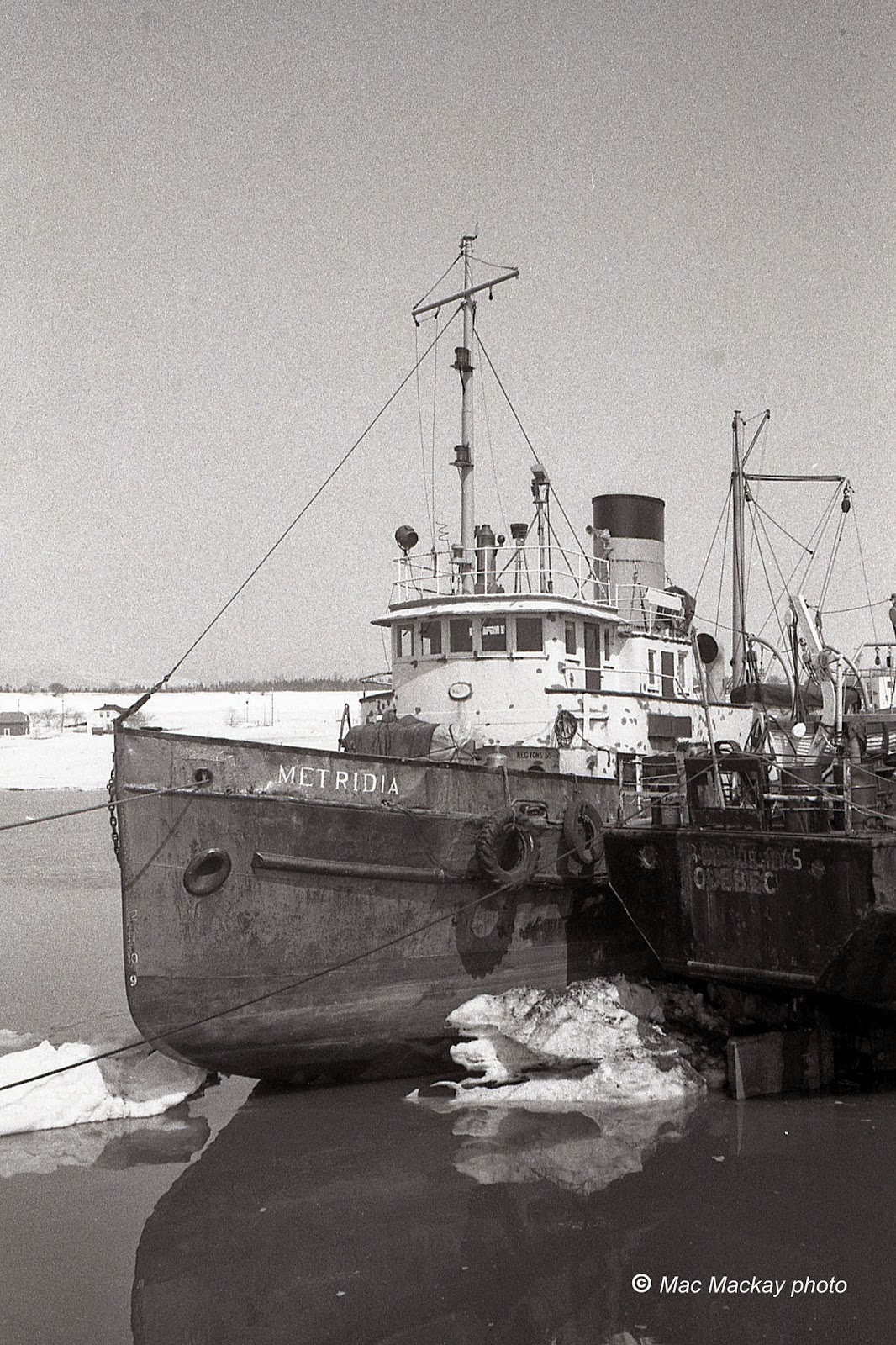 Metridia at Ile-aux-Coudres, QC awaiting a much needed refit in the spring of 1972.

In 1970 the tug was sold to a diving company based in Montreal and renamed Metridia. In 1976 owners in Rimouski bought the tug, but it was beached at Bic, and eventually dismantled and scuttled off nearby Ile St-Barnabé. 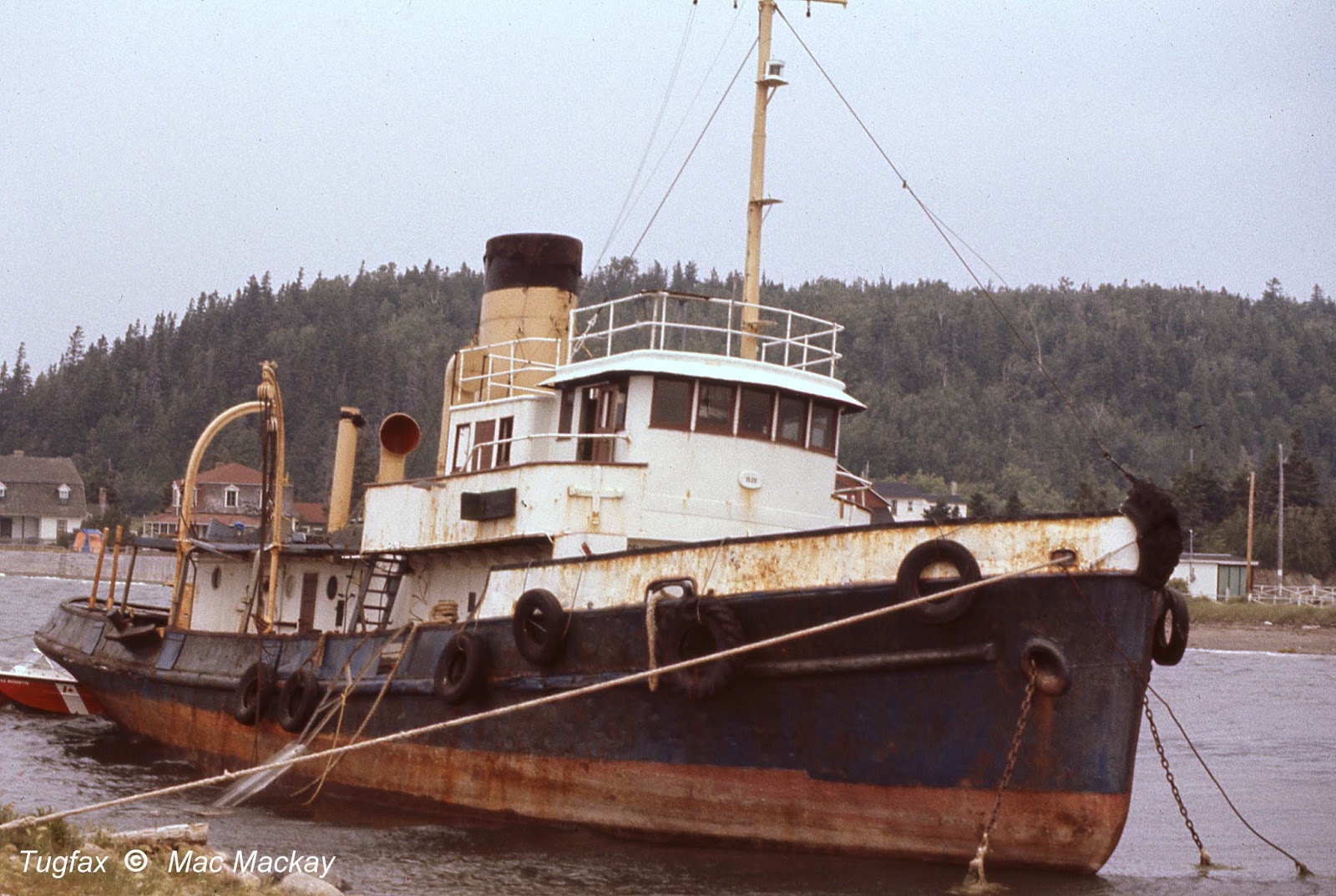 
By the time I saw it first in 1972 it had been much modified with a steel wheelhouse and raised bulwark forward, but in other respects looked much the same as when it was built.