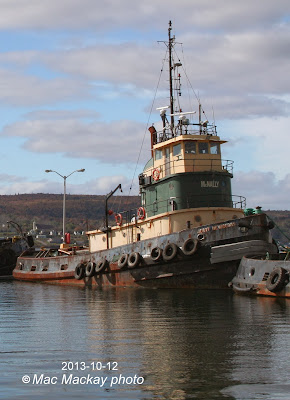 The veteran tug Jerry Newberry has found a new career. On the for sale list for more than a year, a buyer in Newfoundland has  purchased the tug, expecting to find work connected with the massive Hebron oil project. The tug is due to sail from its layup berth in Port Hawksbury in a few weeks, with a fresh coat of paint and some other improvements, to take up the new post.

The thrice renamed tug was the first in a new era of postwar tugs built in Canada for Foundation Maritime, the tug operation arm of the Foundation Company of Canada.With the development of new iron ore mines in Labrador and the looming opening of the St.Lawrence Seaway, Foundation saw a need for more powerful tugs. They set out to replace their entire fleet of pre-war and war-built tugs and in the end built ten new tugs over a seven year period, nine of them in Canada.

The Foundation Victor slid down the ways at Davie Shipbuilding in Lauzon, QC on November 19, 1956 and was handed over to her owners December 22. At 244 gross tons and 1380 bhp (delivered by an 8 cylinder Fairbanks Morse, to a single screw) it was a big tug for its time, and was thought to be capable of handling the biggest ships of the day. It was intended to work in Sept-Iles, QC in summer and Halifax in winter, following the pattern of the day when the Gulf of St.Lawrence was closed to winter navigation and Halifax and Saint John became the primary eastern Canada ports in winter.

The tug sailed from Lauzon January 11, 1957, and with the assistance of the icebreaker N.B.Mclean
worked through heavy ice to Bird Island. It then reached Sydney on its own to effect repairs to due to iced up radar and standard compass. It reached Halifax 19 hours after leaving Sydney.


Joined by near sister Foundation Valour in 1958, the pair continued in the winter/summer pattern for some time, but events eventually overtook them. Winter navigation became a reality and  Sept-Iles became a year round port. Ships increased in size and tug horsepower had to grow with it, and the duo were virtually obsolete with a few years. It was not until 1973 however that new 4,000 bhp icebreaking tugs displaced the pair from Sept-Iles and they transferred to Halifax permanently. Even in Halifax, which had become a year round port, they were underpowered as larger ships needed more powerful tugs, with quicker response times. 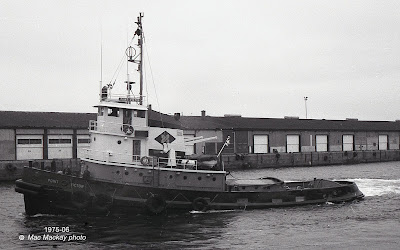 Meanwhile Foundation had sold the tug fleet in 1968 to MIL Tug, a division of Marine Industries Ltd of Sorel, QC, who then sold MIL Tug in 1971 to what became Eastern Canada Towing Ltd (a joint venture between the Dutch Smit and British Cory) in 1973. Ectug, as it was known, renamed the tug Point Victor and  found some work for it, but sold it in 1977 to Pitts Engineering + Construction Ltd of Toronto. 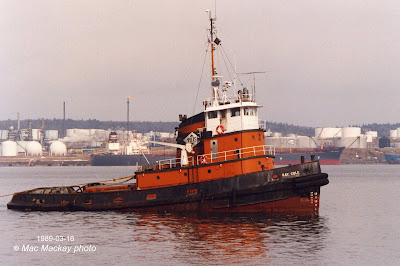 2. Kay Cole was fitted with a towing winch, mounted low on the after deck, feeding the tow wire forward through a sheave at the former towing hook location, then aft over the stern.

Renamed Kay Cole the tug ranged far and wide around eastern Canada towing Pitts' dredges and scows to construction sites.They also fitted it with a towing winch. It had a good run with Pitts (which among many other companies merged into various other concerns including Foundation) until 1991 when it was sold to McKeil Work Boats of Hamilton, ON. 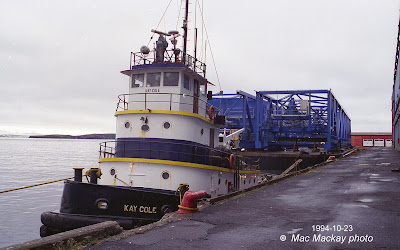 3. In McKeil colours, the tug lays over in Halifax while towing a barge with crane components to the US. 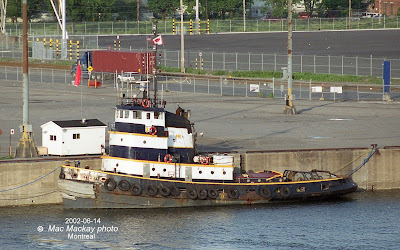 4. As Jerry Newberry the tug worked in Montreal for time when McKeil provided ship berthing services in the port.

McKeil ran the tug as Kay Cole until 1995 when it became Jerry Newberry. It ranged even farther afield for McKiel, including barge towing to the United States east coast, but as their fleet expanded it was sold to McNally Construction, also of Hamilton in 2007. It was used by their Beaver Marine subsidiary on the east coast and the north. It was while returning from Labrador that it lost the crane barge McNally Olympic when the tow line parted and the barge drifted ashore. The barge was also carrying the smaller tug Le Taureau which was also lost.

5. The tug was looking quite forlorn while laid up in Port Hawksbury last summer. Competitor Mac Isaac Construction had their tug/wokboat conversion Whsipering Seas II tied up alongside.

McNally laid up the tug in Port Hawksbury and listed it for sale, but it was only last month that new owners were found. They have not re-registered the tug or changed its name yet.

Whitby to the rescue

When the ferry Princess of Acadia lost power on November 7, it was making its approach to the Digby, NS terminal and ran aground by the stern, not far away. The ship regained power and was able to berth at the dock two hours later. After several days of diver surveys, investigation and perhaps repairs, the ship was able to sail again on November 10.
Nowhere in the media coverage I saw, was the name of the tug Whitby mentioned, but it was on the scene and appeared in several media photos, alongside the ship's stern as it finally reached the dock. Normally the nearest tug to Digby is in Saint John, NB - several hours steaming time away.
Granted Whitby is not powerful, (474 bhp) if it figured in the "ungrounding" or was used as a precaution while the ship finally reached its berth I do not know, but its presence was fortuitous. Its owners, McNally Construction Ltd are finishing up work at the Digby terminal and it was only by chance that the tug was in the neighbourhood.
Built in 1978 for McNamara Construction, the tug worked in Halifax on the Halterm extension in 2010-2011 and left Halifax for Digby aboard the Canadian Argosy March ,11, 2013.. 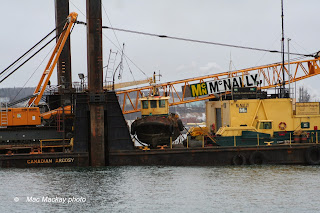 The tug ex fishing boat Scotia Diver  has been spotted in port October 30, at pier 9C and at pier 6 - both positions awkward for photography. It is still in as of this evening. 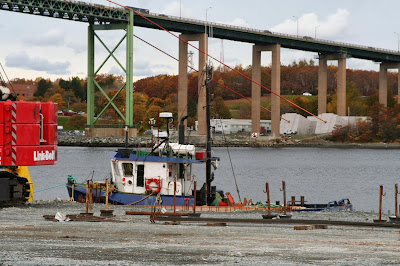 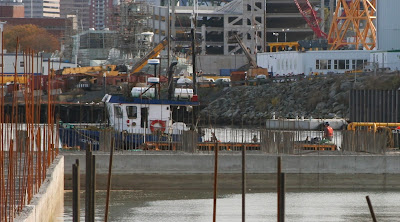 Built in 1979 by Lunenburg Foundry + Engineering as the fishing vessel Wanda and Paula, it was renamed Scotia Diver in 1997 when Halifax owners bought it as a dive tender/towboat. It did see frequent use in Halifax and as far away as Gaspé for a time, but was then laid up for number of years until sold in 2010. The current owner, from Port Hawksbury, has put the boat to good use in general towing and contracting work.
I assume the tug is in Halifax to tow out the small dump scows SA2 and SA3 that Dexter was using in  at Pier 6. They are owned by Indian Head Towing of Port Hastings, NS. Scotia Diver probably towed them to Halifax as well, but I missed that. The wild weather for the last few days has no doubt resulted in a postponement of any departure.