Ryan Leet - off to the oil fields

After a week of fitting out for a new task the Ryan Leet sailed this morning from pier 9. After a stop in St.John's, the tug will survey the route for a new fibreoptic cable to run to the Hibernia offshore oil field. 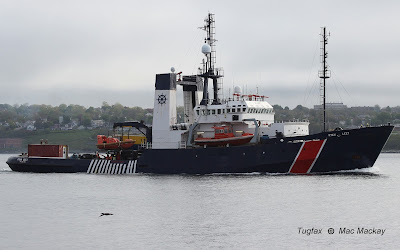 It was almost exactly 25 years ago that I got my first glimpse of this mighty tug and its sister, after they arrived in Canada for the first time. Secunda Marine Services, as they were then called, picked up the pair in South America. Despite being built by Belliard Murdoch in Ostend, Belgium in 1978, Abeille Provence and Abeille Normandie were French rescue tugs commissioned in response to several large tanker disasters.
When replaced by larger tugs in 1987 they were sold to Venezuela as Salvor Commander and Salvor General, but their new owners were not able to find sufficient work for them and they were laid up.
Under Secunda ownership they were extensively refitted to become Ryan Leet and Magdalen Sea, and  performed numerous tows and other chores both in Canadian and European waters. 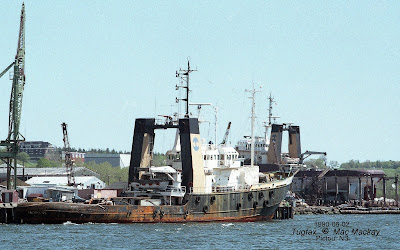 Ryan Leet has remained with Secunda through its changes in ownership, and has been used extensively as  a standby vessel. Magdalen Sea was sold in 2004 becoming Zouros Hellas and in 2007 Tsavliris Hellas. It has figured in several important salvage operations. It is currently based in Las Palamas. 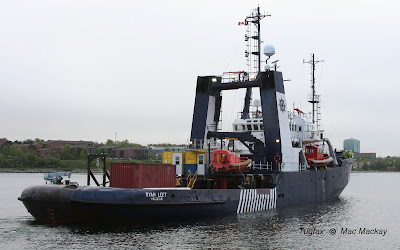 Ryan Leet won't be doing towing work any time soon, with all the survey gear on its deck. It has also been fitted with a small crane right aft, and a portion of its rolled stern bulwark has been cut out.

Gulf Spray - somebody has to do it

The tug Gulf Spray earns its keep towing a scow with garbage  from cruise ships. It may not be glamorous work, but the process is well organized, with a lot of separation on board the ship itself. 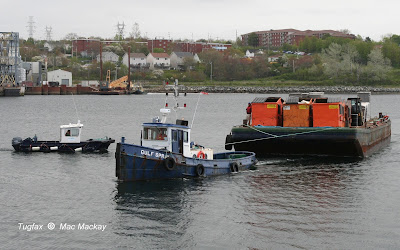 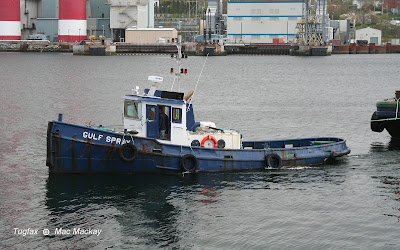 Once loaded the scow returns to the pier 9A in tow where it is unloaded by forklift with the "cargo" distributed into bins for recycling or incineration at a special international waste incinerator. 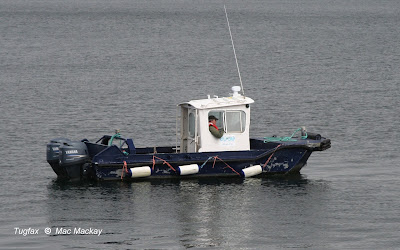 Assistance to Gulf Spray and its scow is provided by the outboard motor boat which has a square bow for pushing and a towing bit. 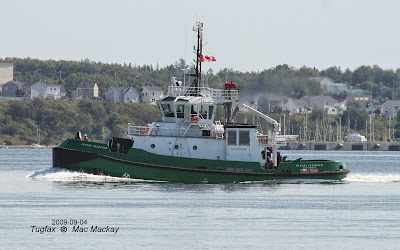 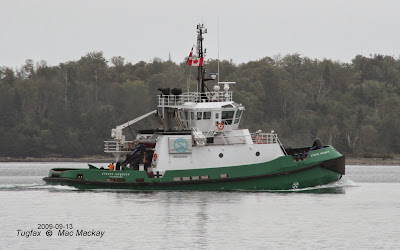 Former Canadian warships based in Halifax when decommissioned were either sold for scrap to India, the USA or reefed in Canadian waters, with one exception.

That exception was HMCS Provider, Canada's first modern fleet supply ship. A combination tanker and cargo ship it was a more substantial vessel than the lighter weight destroyers, and was sold for scrap to Turkey. It was also not towed overseas by a Russian tug!

Instead it was towed by one of the seven superb tugs from International Towing Contractors (ITC) that were well known in Canadian waters. For Provider the tug was Sirocco, built in 1978 in Japan. The 8200 bhp vessels were among the finest of their type, with a bollard pull of 110 tonnes, and kitted out for salvage.

Most scrap tows of former warships from Halifax departed from the civilian piers, but Provider left from the Naval Armaments Depot jetty in Dartmouth, with the assistance of the naval tug Glenbrook and a send off from the fireboat Firebird.

Sirocco underway with ex HMCS Provider with Glenbrook preparing to take off the riding crew. 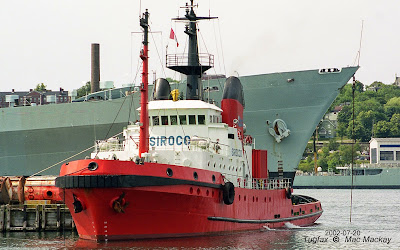 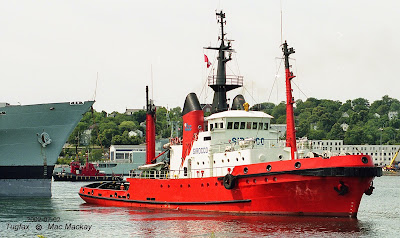 CFAV Firebird takes time away from its security round to see the tow off.

Sirocco was on impressive tug from any angle. In 2011 it was sold to Turkish owners and renamed Izmir Bull. Flying the Cook Islands flag, it has been working mostly in African waters.

Provider was also a striking looking ship-even in its lightly ballasted trim.

A few posts recently have left readers dangling, so here are some updates:

Jim Kilabuk sailed from Halifax April 30. Before leaving however, it went to the Shearwater military pier and loaded some deck cargo for transport to the west coast. Shearwater is the base for the Royal Canadian Navy's Fleet Diving Unit Atlantic, but is used by all branches of the local military. Due to the position of the work I wasn't able to tell exactly what was being loaded. 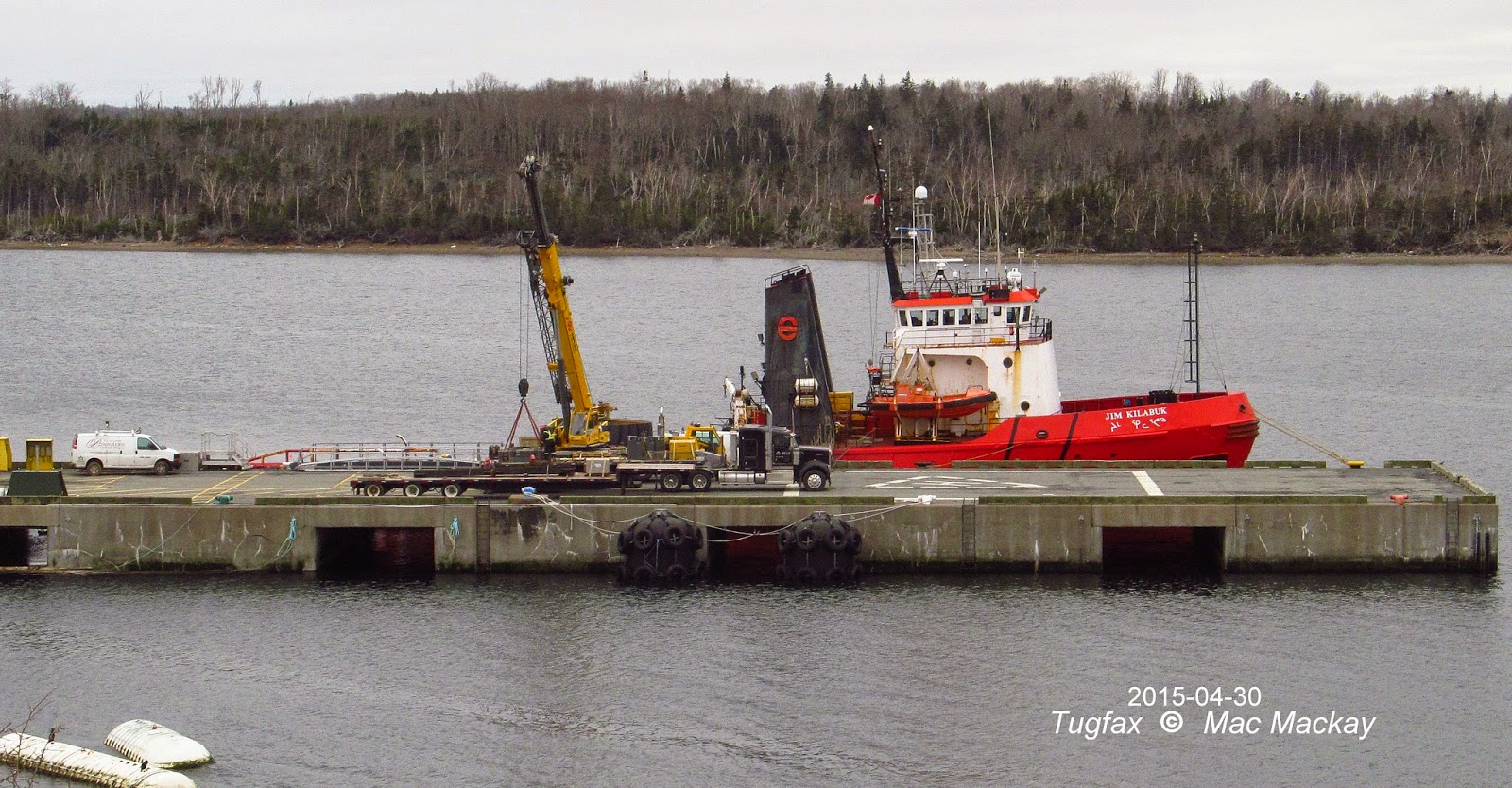 Jim Kilabuk loading at Shearwater April 30,. It sailed later in the day.

Lois M sailed April 20 with the barge Nunavut Spirit and a large deck load of steel fabricaiotns for the Hebron gravity base prpoject.
The tug returned to Halifax May 1 with the barge MM300 to load more cargo. On Saturday May 2, I noted a large tank already loaded on deck. 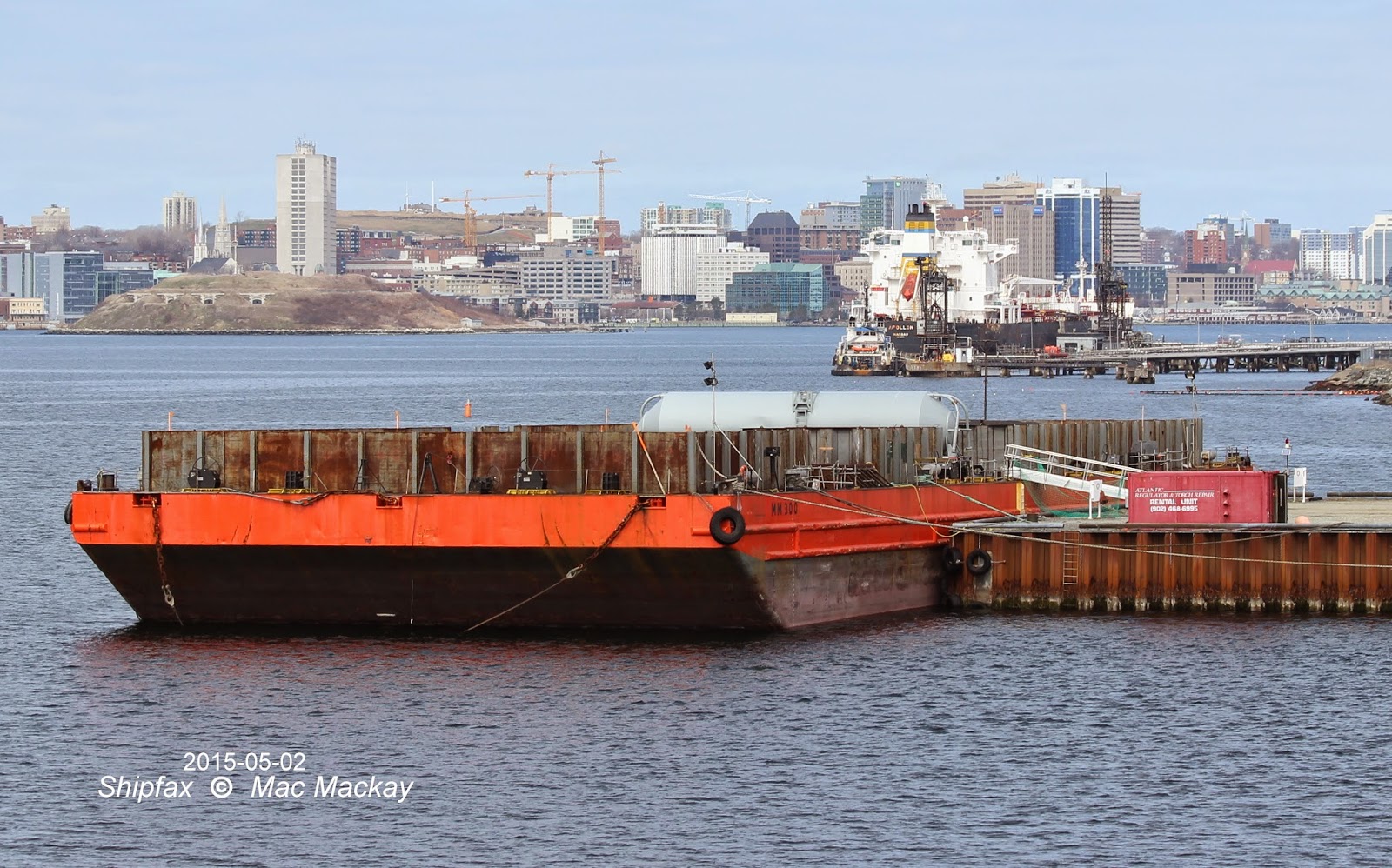 MM300 at the Cherubini dock, with Lois M taking fuel at the Imperial Oil dock in the background.

Svitzer Cartier has arrived at Port Cartier after stops at Méchins, presumably for drydocking, and at Sept Iles.

Following the sale of Maersk Placentia comes the registration of their latest tug/supplier, Maersk Cutter the 6450 grt ship was registered in St.John's April 28. It is under construction at the Asenav shipyard in Santiago, Chile.

The tug J.F.Whelan was back at work this morning after sitting out the winter at the Nova Scotia Power Corp dock at Tuft's Cove. For most of the winter, it was sitting on the deck of the crane barge Derrick No.3, but was refloated last week. 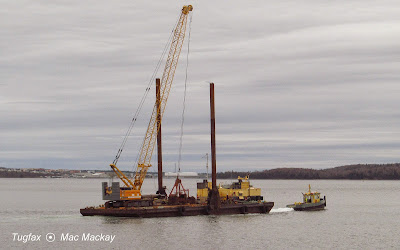 This morning the tug and barge went to work at Halterm for some maintenance on the pier 42 extension. The crane has been fitted with a dredge bucket, probably for some bottom leveling work.

See the three part posting from last June when the tug was newly delivered to McNally Construction from its builders in Gaspe, starting with: http://tugfaxblogspotcom.blogspot.ca/2014/06/jfwhalen-part-1.html

A tug that visited Halifax only once, and then only for two days, has achieved notoriety. Hamal was arrested off Scotland April 23 in the largest cocaine bust in UK history. Initial reports indicate that there was nearly three tons of the dope, with an astronomical street value of  BP 500 MN, aboard the tug.
Hamal aroused suspicion on a trip from Turkey to Hamburg, Germany. After stopping in the Canary Islands (not exactly on a direct roue) it then went west about Ireland and north of Scotland instead of the normal route through the English Channel.
British authorities took the tug into Aberdeen where it has been impounded and the nine Turkish crew members charged for drug trafficking. While it may have been a bit of a rare bird when it called in Halifax, it was certainly well known in Aberdeen and other British ports in its original guise.

It was built in 1979 as one of a pair for Alexandra Towing. Named Formidable, it was certainly that in its day, with 3520 bhp, driving twin CP props in steerable Kort nozzles for 55 tonnes bollard pull. Designed to handle the biggest ships afloat at the time, it was also built to work with offshore construction barges and drilling jackets.It was stationed in Gravesend and sister tug Indomitable in Liverpool, but they traveled widely.

Alexandra formed a division called Alexandra Marine Transportation and built a fleet of giant semi-submersible barges for offshore work, and the two tugs went to work towing them offshore.
Alexandra Towing was sold to the Howard Smith Group which eventually evolved into Adsteam (and finally Svitzer) with the focus turning away form the offshore.

In 2001 Formidable was sold to Svendborg Bugser of Denmark and renamed Eurosund. (Svendborg Bugser was owned by Neils Hendriksen, whose initials appear on the tug's wheelhouse). Eurosund traded all over the Atlantic basin and arrived in Halifax July 2, 2002 from Curaçao, light tug. The next day it set out for Trondheim, towing its former fleet mate AMT Trader. To see such a relatively small tug towing such a large barge was worth standing in the drizzle, particularly when they obligingly sailed out west of George's Island. (The oil rig Rowan Gorilla V was working with tugs on the east side of George's Island at the IEL dock.)

The tug was notable for its asymmetric wheelhouse, which was longer on the port side, to include a winch control and second steering position facing aft. 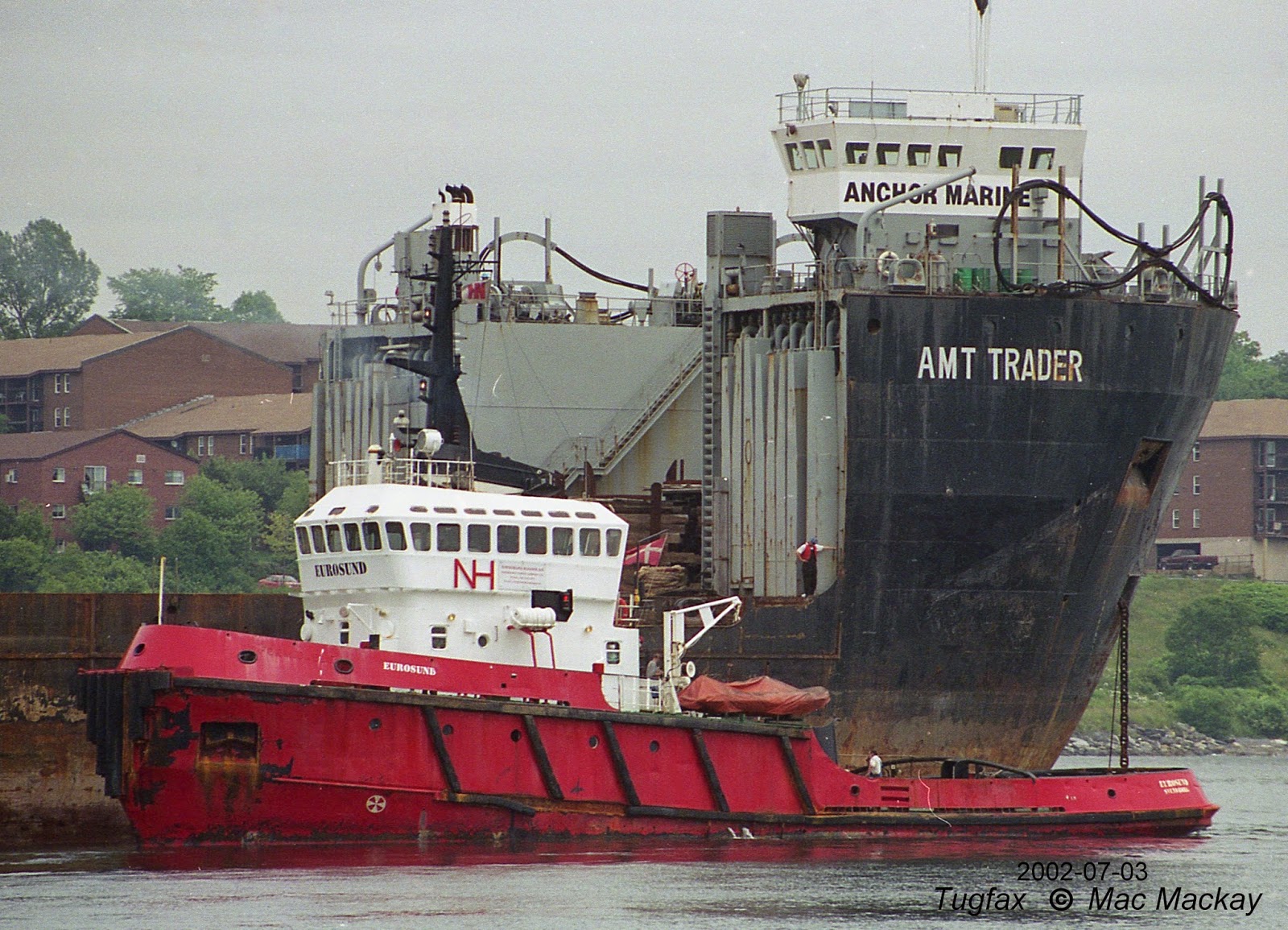 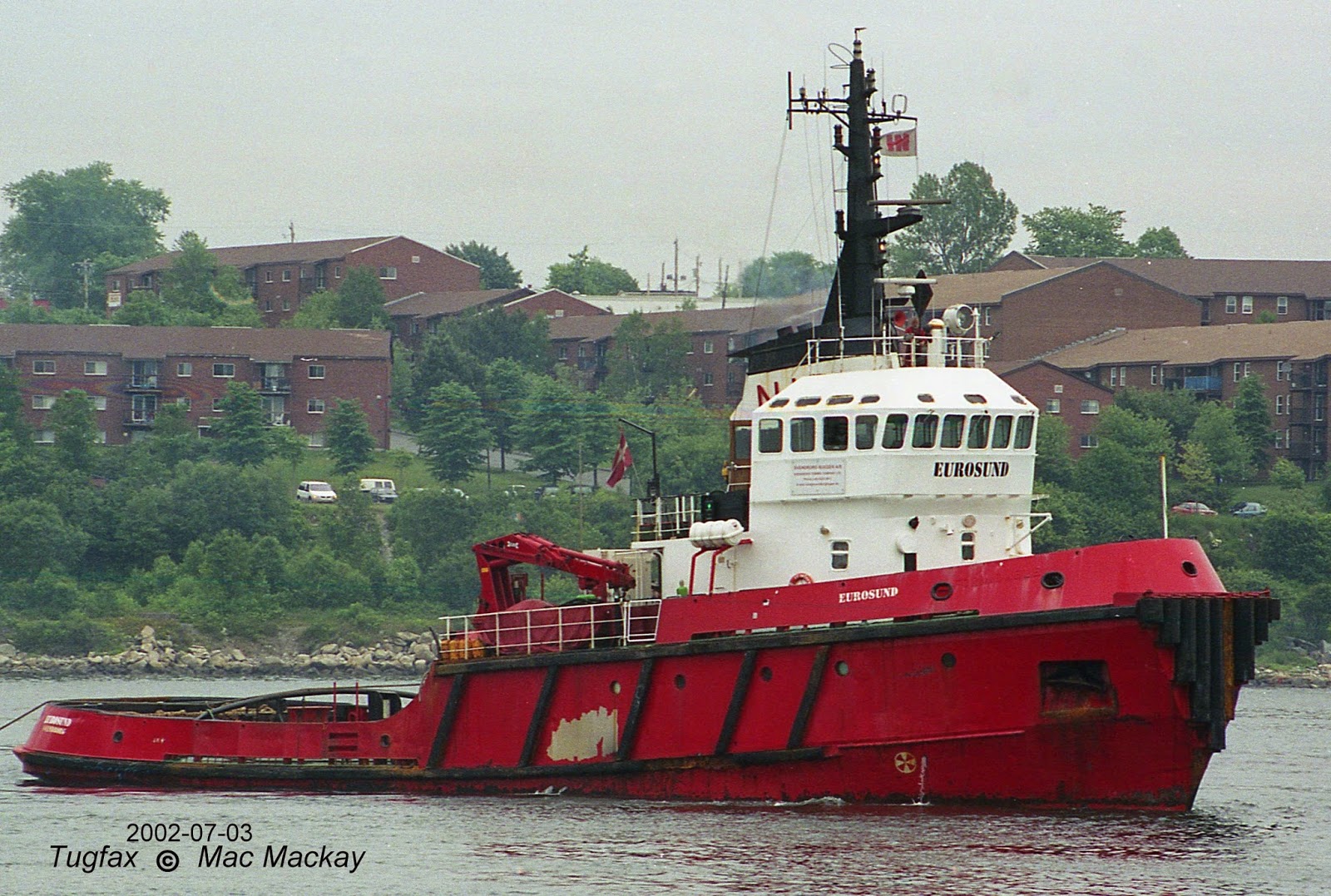 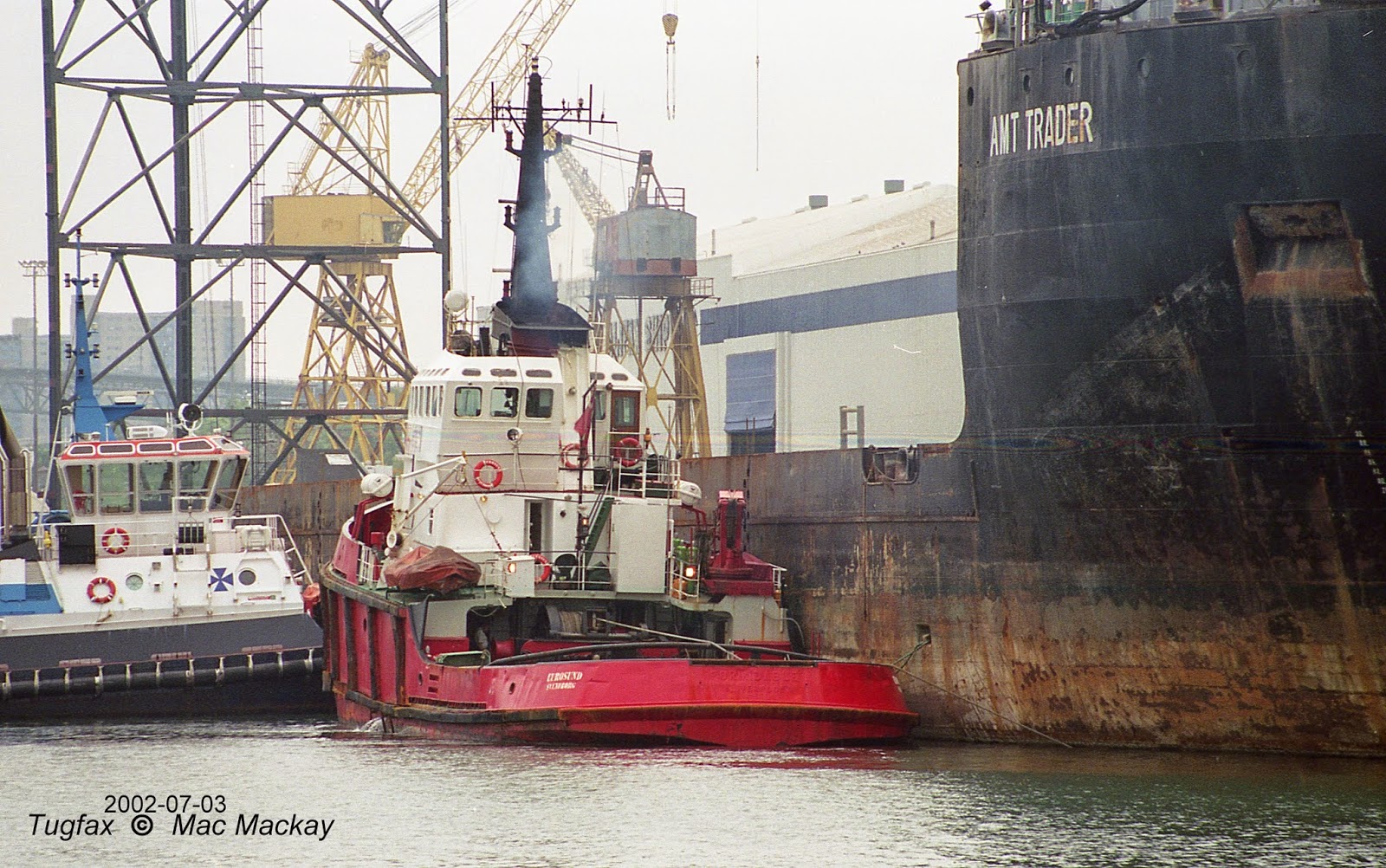 If the tug's hull shape looks familiar, it is because it came from the Richard Dunston shipyard of Hessle, England, builders of Ectug's Point Carroll and the fleet of fire tugs for Smit + Cory International.

Halifax Shipyard had used the barge to float the oil rig Eirik Raude for removal of its thrusters, and once they had completed the work, the barge was sent on to other chores.

Svendborg sold the tug in 2010 and it was renamed Mignon In 2013 it was renamed Hamal and it is under that name with Tanzanian registry that it was nabbed off Scotland.