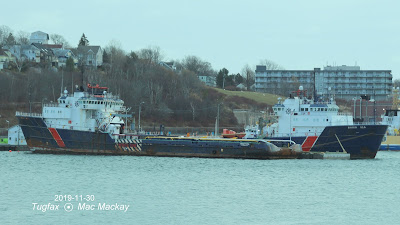 I made an error in my last post regarding the workboat Dominion Warrior. The vessel was built in fact by Neptune Shipyards BV in Aalst, Netherlands. The info I used in my post came from the Transport Canada Vessel Registration website, so apparently was submitted by the owners. Where they got the information is a mystery, but I suppose it is possible they misunderstood some paperwork that was in the Dutch language. 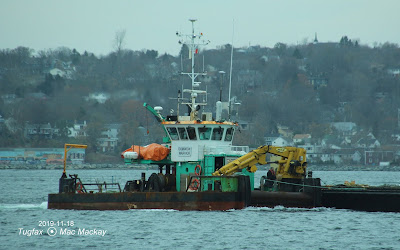 Dominion Warrior is a Eurocarrier 2209 multi-purpose workboat. Last week it was used as a tug to handle a dump barge - a chore it seems to have handled well. 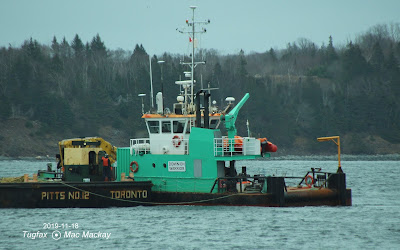 My older posts, back in March, 2018 had the correct builder information, and so do not require correction:

The versatile Dominion Warrior added another arrow to its quiver today as it took over towing responsibility for the dump scow Pitts No.12.

The dump scow job would normally be done by the tug Mister Joe but it is towing the crane barge Idus Atwell to Point Tupper / Port Hawksbury (with the small tug Whitby on deck.) That leaves only the tug J.F.Whalen in Halifax, and in view of today's windy conditions, it would not likely be up to the job of wrangling the dump scow.

The job involves hauling the loaded scow from one end of the port to the other and dumping its rock cargo on the harbour bottom. The rock is then bucketed, by crane barge, into the cells of the concrete cribs that have been sunk in place to extend pier C. 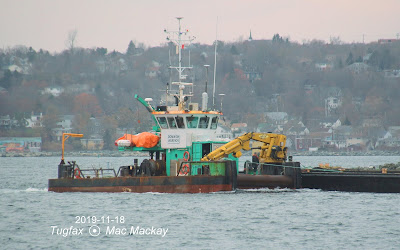 Dominion Warrior was acquired in 2018 and is a twin screw 1200 bhp Multicat with 25 tonnes bollard pull.  Built in 2007 by Dodewaard Shipyard BV in the Netherlands as Coastal Warrior, it is a multi-purpose vessel of a type that has proven quite popular in Euorpe, but is still relatively rare in Canada. In addition to towing and pushing, it can carry deck cargo, including containers, up to 100 tonnes, has a 30 tonne deck crane and 50 tonne winch, all combined on a shallow draft hull of 21.5m x 9m x 2m draft,  that allows for beach landings. 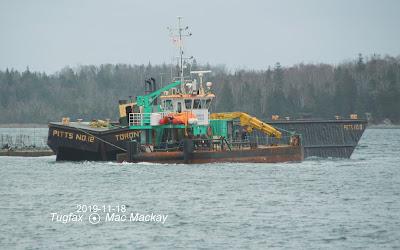 It only takes a few seconds for the split hull scow to drop its load. McNally has two more dump scows in Halifax but both are bottom door types and much more laborious to work. 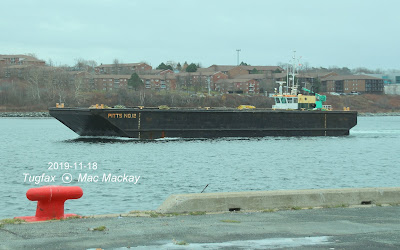 Even with the light scow on the hip there is excellent visibility from the Dominion Warrior's bridge.

Once today's high winds subside the crane barge Derrick #4 will be back on the job filling the cells of the pier extension. 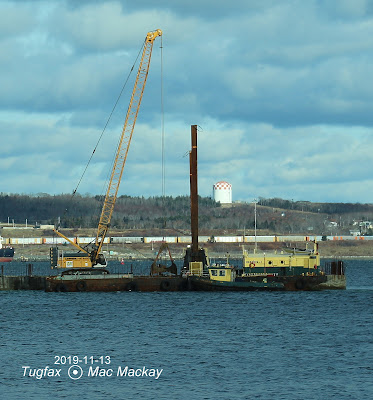 Derrick #4 with the tug J.F.Whelan alongside at pier 42 with its clamshell bucket at the ready.

The Narrows - the place to be

For a short stretch of time this morning [ 9:47 -10:21 AST], the Narrows was the place to be to see some tug and workboat activity.

Siem Commander arrived to tie up at pier 9C south. 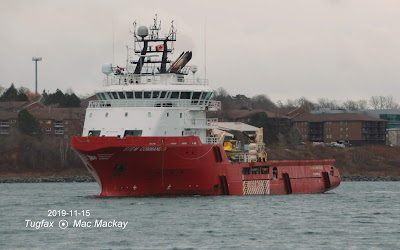 Since joining Secunda Marine from parent Siem in July, the boat has been kept busy replacing Trinity Sea on Secunda's Exxon Mobil contract. That work involves decommissioning the Sable Offshore Energy Project gas installations. The seven platforms will all be removed and the 22 wells capped by the end of next year. 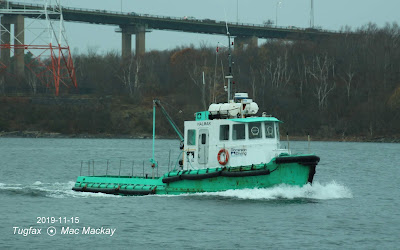 Dominion Diving's general duty workboat Halmar was returning from Bedford Basin after delivering a pilot to the anchored bulk carrier Salarium. The self-unloader was moving to National Gypsum on departure of the Algoma Verity [see Shipfax].

Also returning from the Basin, the Dockyard tug Glenside completed a security patrol to Birch Cove. Although the research barge is not there now, a flat deck barge has been moored in its position, and requires periodic checking. 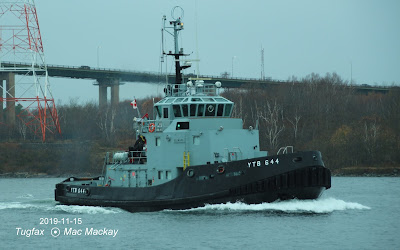 Glenside is showing some rust on her strongback / stern rail from some recent towing work.

The tug Mister Joe returned from pier 42 with the split hull hopper barge Pitts No.12 after delivering another load of ballast rock. 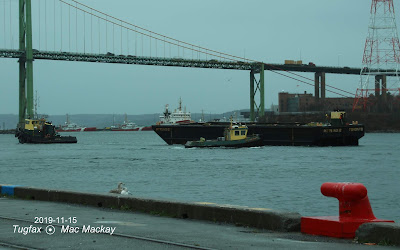 J.F.Whalen came out to assist the barge alongside as the outbound Algoma Verity was fast approaching the Narrows.

McNally's work on extending pier 42 southward is nearing completion with the cribs almost completely ballasted. The Port has also let the contract for the cope walls, and McNally is beginning to pack up some of its plant. 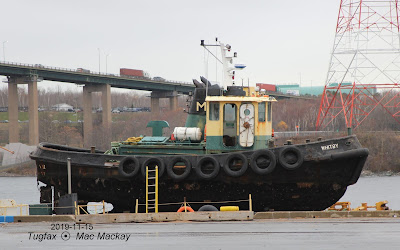 The tug Whitby has been loaded aboard the crane barge Idus Atwell both of which were brought in from the Great Lakes last spring for this project.

Although it is a research vessel, the CCGS M.Perley is certainly a workboat. Built by Meridien Maritime Reparation Inc in Matane, QC in 2012, the 210 grt vessel is used for nearshore fisheries research and usually lays up for the winter at the BIO in Dartmouth. 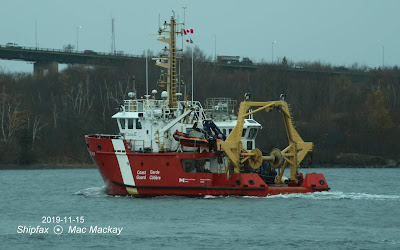 The vessel's specs are outlined at: https://inter-j01.dfo-mpo.gc.ca/fdat/vessels/vessel-details/120