Thanks to Capt. Clar Vautier I have more photos of the McKeil tug Leonard M. (ex Point Halifax) in St.John's acquiring its new elevated wheelhouse. 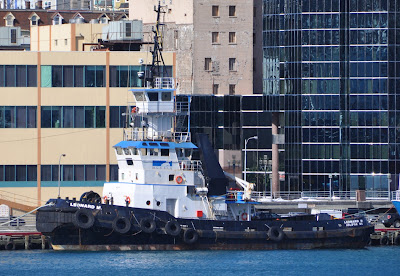 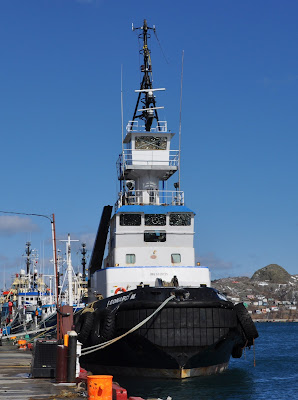 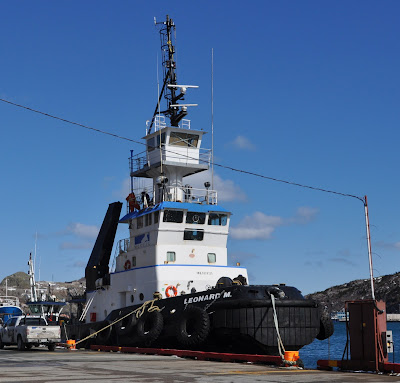 It appears that the tug's original single mast has just been plunked down atop the new wheelhouse. As one commentator observed, if she was thought to be a poor sea boat before, this will not help!

For reference purposes, here is Point Halifax, less than a month after entering service in Halifax harbour. 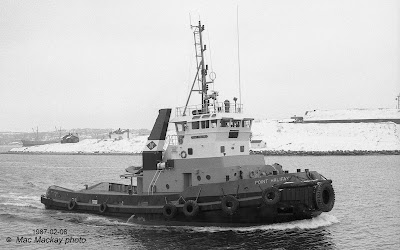 Mega and Motti - successfully handed over

The tug barge combo Mega and Motti arrived in Quebec City March 23 and were successfully handed over to Groupe Océan. (It is always good when the new owner accepts delivery!)
Thanks to our anonymous translator here is a summary of Capt. Wiechmann's (the delivery skipper's) last diary report:

The Mega Motti is alongside in the Vieux Port,Quebec and the
Dutchmen have successfully handed the vessel over to the new
owners, Groupe Ocean.The captain and the crew had a little
get together for a "end of voyage beer" which he described as
being "heeeel gezellig". There is really no precise English translation
for this dutch expression.Google translate makes it "very nice"
but that does not cut it, a pleasant atmosphere of camaraderie
would be closer.

We await transfer of flag from St. Vincent and the Grenadines, and of course new names, and some made in Canada photos.
Posted by Mac at 8:55 PM No comments:

It must be spring- Atlantic and Secunda expand

There must be spring in the air as both Atlantic Towing Ltd and Secunda Marine Canada have added to their fleets.
Atlantic Towing Ltd have acquired a sister to last year's acquisition Atlantic Kestrel built as Jaya Supreme. The large anchor 12,000 kW anchor handling tug suppliers are the largest in the Atlantic fleet.
The ship to be acquired is under construction as Jaya Sovereign in Singapore for May 2013 delivery. See spec sheet here: http://www.jayaholdings.com/UploadedImg/1337165558_JayaSovereign_Anchor.pdf

Secunda Marine Canada* (through a Nova Scotia numbered company) has acquired the Scotian Sea from Havila Shipping ASA of Norway. Built as Rescue Saga, it has carried the name Havila Runde since 1998. Of 2,107 gross tons, it is powered by a pair of 3500 bhp Cats and is fitted with an azimuthing thruster forward, and transverse bow and stern thrusters. It was registered in Halifax today (March 20) in Halifax.
Find full specs and illustration at: http://www.havila.no/fleet/rrv/havila-runde
Could this spell the end of Sable Sea which has been laid up for months at pier 9A?

* Since being repatriated from ownership by McDermott International one year ago, Secunda Marine Services became Secunda Canada LP, doing business as Secunda Canada.
Posted by Mac at 8:50 PM 1 comment: 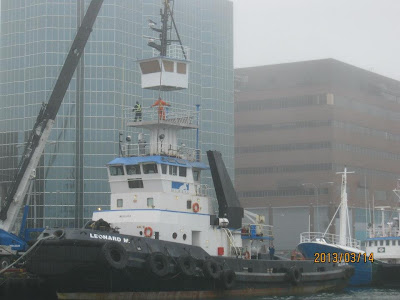 McKeil Marine's tug Leonard M. is getting a new elevated wheelhouse while in refit in St.John's, NL.
Built as Point Halifax for Eastern Canada Towing in 1986 the tug seldom ventured outside of Halifax Harbour for many years, because it was not considered a great sea-boat.  However as newer tugs came on line it was used more and more outside, and in its last years with Svitzer/Ectug it ventured as far north as Hudson's Bay and Rankin Inlet and as far south as the Bahamas.
Built by McTay Marine in Bromborough, England, the tug is rated at 4,200 bhp with a pair of Ruston/English Electrics driving z-drives. It was the pioneering z-drive on the east coast of Canada and was built of very good stuff. In addition to the ship handling winch forward, it is fitted with a towing winch (enclosed in the deck house extension) stern roller and full towing gear. Its after deck was also sized to accommodate two 20 foot ISO containers.
Since being acquired by McKeil the tug has operated from the Great Lakes to Newfoundland and beyond in barge service, and it looks that will continue with addition of the bird house.
Posted by Mac at 10:48 PM No comments: 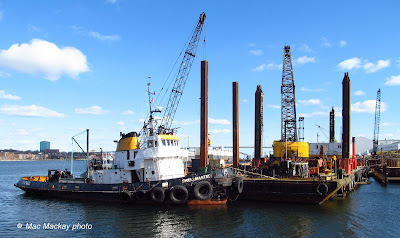 Swellmaster arrived today with a mud scow from Saint John and joined the crowd of equipment at pier 6. Work there is to include dredging and placing a gravel mat for nine new cribs to extend the pier area. Now at the pier are Channelmaster - reconfigured as a deck scow with two spuds, Cranemaster, mud scows HD-8 and HD-7 (which is now at pier 9-A) Atlantic Tamarack and Irving Chestnut, and the little scow Mighty Master. This is all the gear they need to start dredging, but it appears that there is a loading ramp is also under construction. This may be to bring in gravel for the mat.
Posted by Mac at 10:27 PM No comments:

It appears from the excellent Redwise site that Groupe Océan's newly acquired tug/barge combo Mega/Motti has sailed from Bermdua.
Thanks to Google translate, I hacve this rough translation from the Captain's log:

If you lie to wait for a period of "beautiful" again, plays continued the question: do we or do we not now. To make that choice, you obviously need a weather report, that the entire period of the sailing route spans.
Previously you previously listened to the weather reports on the radio and watched mainly on the prospects. With a notebook and a pencil was hastily "co-written" with the reader of the weather. Often resulted in an illegible scrawl, and a discussion with the helmsman in the trend: "I think it snaps back quite nicely on".

Today the weather and the prospects nicely via email sent to the ship and printed. That discussion with the helmsman can therefore be omitted. That saves a lot of time!
We also of course have the Internet, where a range of sites to see are all weather forecasts show. Think of it as "radar" but for the sea.
And that, dear reader, then dives again the old problem of "go" or "no go" on. For how many sites you visit, there are always differences. So get back to discussion with the officer, "but another site shows that ......."

So it would seem that after several weeks of waiting for better weather, they are on their way!
Posted by Mac at 11:10 PM 2 comments:

Sandra Mary got underway late this afternoon with the derrick barge Canadian Argosy. (see previous post.) The delay in returning to sea may have been to repair some damage incurred during the prior attempt. - see previous posting.
Yesterday one spud was lowered and men were working on the other.
Posted by Mac at 10:36 PM No comments:

Sandra Mary set out this morning for Digby towing the big derrick scow Canadian Argosy. However when they got outside conditions were too severe to make headway and they returned to port.
Owners McNally Construction, have been trying to get the rig to Digby for a week now, but conditions have just been too rough. High seas and headwinds would make progress nil, not to mention risking damage to the derrick and gear.
They may try again tomorrow.
2. Sandra Mary is a product of the famed Russel Bros shipyard in Owen Sound, ON, and is a proper little tug of traditional design.
3. The tug is fitted with a towing winch and has cutaway rails at the stern. 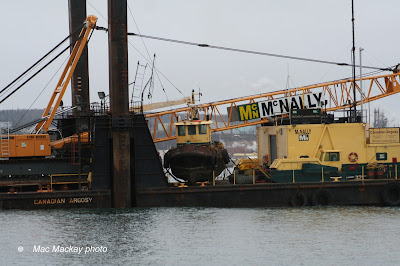 4. The tug/workboat Whitby is cradled on the deck and secured with braces for the sea trip.
5. The flotilla returns to pier 9 this afternoon.
Posted by Mac at 10:07 PM No comments:

1. Atlantic Tamarack comes alongside at pier 9.

The tug workboat Atlantic Tamarack arrived last weekend with the hopper scow HD7. Fleet mate Swellmaster also brought in the dredge Cranemaster, but returned to Saint John. All will be working at pier 6 on a major dredging and pier construction project for Halifax Shipyard.
Tamarack has become the dredge tender of choice for Harbour Development, although the old T-Boat Irving Chestnut is also in port. 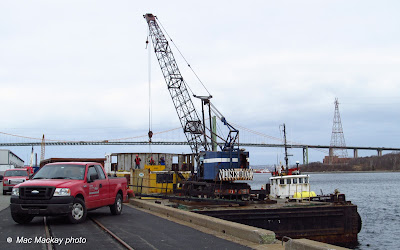 2. Irving Chestnut sits alongside as crews cut down the derrick scow Channelmaster at pier 9.
Posted by Mac at 8:20 PM 1 comment: 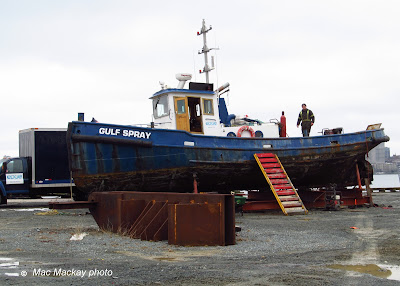 The hardworking tug Gulf Spray was hauled out on the IEL dock this week for a refit. After being "evicted" by public pressure from its long time home near the old CN Pier last year, the tug was laid up for the winter somewhere in the lower Burnside area.
Used for transferring garbage barges from cruise ships, the tug does useful work in the harbour. Built in Pictou in 1959 it was extensively rebuilt in 2007. It is a single screw tug with a fixed nozzle.
Posted by Mac at 10:19 PM No comments:

Newly launched for Superport Marine of Port Hawksbury is the tug/workboat Strait Raven It was launched February 14 at the owner's own shipyard but has not been registered yet. It is reported to be heading for Newfoundland on contracted work.

Also new is Groupe Océan's latest ASD tug. Océan Pierre Julien was registered in Quebec City on February 22. The 204 gross tons, 3,000 kw tug is the latest in a series of small powerful harbour tugs built by the company's Industrie Océan yard in Ile-aux-Coudres, QC. It is expected to go into service in the spring, possibly in Montreal. The shipyard has now started work on the TundRA class escort tug.

Back under Canadian flag for the second time in as many years, but this time with a another new name is Atlantic Tern. When acquired by Atlantic Towing last year for support work it was given the very odd name Atlantic Birch II . It was almost immediately transferred to Barbados flag but was re-registered in St.John's February 26, 2013 with the much better name Atlantic Tern.
Built in 1975 as Canmar Supplier II, it was later Suppplier II, REM Supporter and Thor Supplier.
Atlantic Towing follows a naming policy of using tree names for its tugs and bird names for its suppliers. The old  tug Atlantic Birch has been laid up in Saint John for many years, and is not the same vessel as this one.

In the last very few days what appears to be a Sheriff's arrest order has been posted in the wheelhouse window of Craig Trans. In the old days he would nail it to the mast, but that is no longer practical. However what it signifies is that a process of arrest and forced sale is underway. 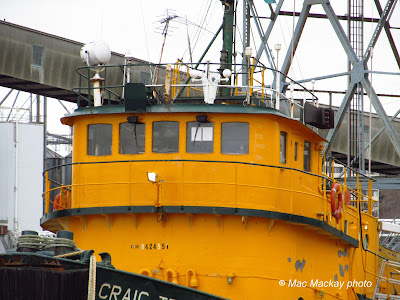 It is not a quick process however, so it may be some time before an actual sale takes, place. In the meantime the ship is attached to shore power to keep it from freezing up.
Posted by Mac at 8:59 PM No comments: