Oldie from the archive.... Abeille 30 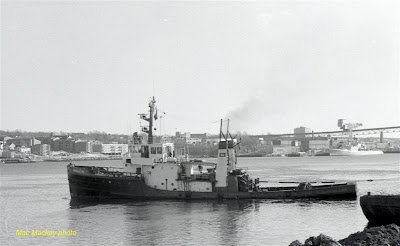 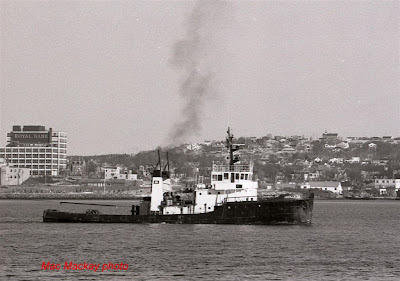 On December 21, 1979 the French tug Abeille 30 arrived in Halifax towing the Algerian cargo ship Biban 12919/77 from Montreal. The ship was built by Marine Industries Ltd of Sorel QC for the Algerian state shipping company. She often traded to the Great Lakes, and it was on one such voyage in June 1979 when she had a catastrophic engine breakdown at Duluth MN.
American tugs South Carolina, Maryland, and Superior, assisted by Lenny B towed the ship to Montreal, arriving July 29, 1979. She sat there until December 11 when she left for Halifax in tow of Abeille 30. The pair tied up at Halifax Shipyard over Christmas.
On January 1, 1980 they set out for Europe where the ship was eventually repaired. She was sold and renamed Mariam 1 in 2002 but arrived in Alang, India January 12, 2003 where she was scrapped.
More info on the Abeille 30:
She was built in 1944 by Levingston Shipbuilding of Orange, Texas as LT 538 one of a large number of standard Large Tugs [LT] for the US Navy. These were ocean going, 2250 bhp vessels intended for towing anywhere in the world.
Following the war she was acquired by Moller Towage of Hong Kong and renamed Margaret Moller.
In 1951, the famous French towing outfit Société de Remorquage et Sauvetage "Les Abeilles" [the bees] bought her and she worked for them as Abeille No.10 until 1972. At that time she was completely rebuilt and repowered, with 5400 bhp, and renamed Abeille 30.
She was a single screw vessel with a Towmaster propulsion system and bow thruster.
Following her transatlantic tow with Biban, she remained with Les Abeilles (now known as Abeille International) until 1983 when they sold her to Spanish owners, Biscay Towing Inc. and she was renamed Biscay 30 under the Panamanian flag.
In early 1985 she was sent to the Mississippi River to tow the vessel Master Petros 22,391/69 , but something went wrong. She was towing the ship downbound on the Mississippi on January 14, 1985 when the tow overran the tug, sinking her, with the loss of one life.
Although she was raised, she was broken up in October of 1985.
Posted by Mac at 9:05 PM