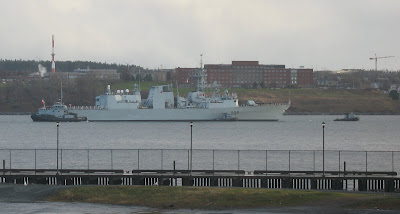 Navy tugs are frequently tasked for cold moves within the harbour. This morning they moved HMCS Charlottetown from the Dockyard to Imperial Oil for bunkers. One Glen and two Villes were given the job. It is a very expensive operation to fire up the main engines on a warship, and so short trips in the harbour are usually done as cold moves.
The Glens are V-S propulsion and can thrust in any direction, but normally handle all lines over the stern. They are often seen lashed up stern too. In this way they can push or pull on command, without having to change position or orientation.
.
Posted by Mac at 9:04 AM