It was a busy day for tugs in Halifax with all four tugs working at one point late this afternoon. As usual one of Atlantic Towing's three large 70 tonne bollard pull tugs has been assigned to Halifax for escort and ship berthing duties. The three tugs were built in association with the Spanish firm Reyser to service the LNG offshore discharge facility near Saint John, NB. Because LNG tankers are infrequent callers in there one of the big tugs can usually be spared for use in Halifax. Up to now that has always been Atlantic Bear and Spitfire III. However on March 9 Atlantic Beaver arrived in Halifax. 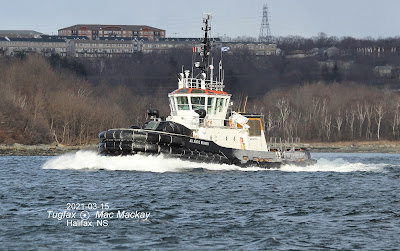 Heading through the Narrows into a stiff north wind this afternoon, Atlantic Beaver was making a little freezing spray on its bulwarks. Its winch and fire monitors are protected for the winter with heavy tarps.

To my recollection this is the first time that Atlantic Beaver has been back in Halifax since it was here on trials in 2008. It was built by Eastisle Shipyard in Georgetown, PE, and as with all the tugs built there it came to Halifax for bollard pull trials, which were conducted off Pier 24 in September and October 2008.

The three tugs of this class are easily identifiable by the extra fendering, particularly the three bow fenders, and the fire fighting monitors mounted on the bridge deck. 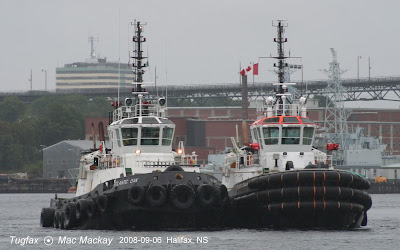 One other item of note is the fixed gangway platform on the stern. Saint John tugs moor in Mediterranean style - stern in to a landing stage, and personnel embark and disembark over the stern.