The last offshore tug/supply vessel based in Halifax sailed for Rotterdam today (June 16) [in dense fog]. Siem Commander first arrived in Halifax July 31, 2019 and participated in the removal of the last offshore gas platforms off Sable Island. Aside from contract towing, the boat has been idle at the C.O.V.E. in Dartmouth ever since the work was completed. In recent days it conducted trials in Bedford Basin and refueled at Irving Oil. 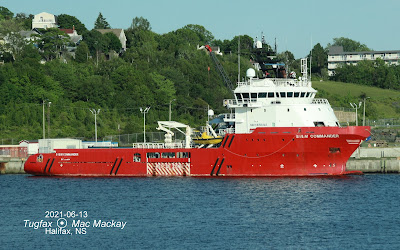 Parent company Siem Offshore, owners of Secunda Marine , still have Avalon Sea and Siem Pilot in Newfoundland, but with no planned activity offshore Nova Scotia it may be a long time before we see any similar vessels in Halifax.

Built in 2009 by Havyard Liervik as Stril Commander for Simon Mokster Shipping AS it is a 2807 gt, 3000dwt vessel of 16,000 bhp, fully equipped for DP2 with a swing up bow thruster and tunnel stern thrusters. Siem acquired and renamed the vessel in 2017 but it has seen very little service since then, either in Norway or in Canada.