The first two new post World War II tugs built for Foundation Maritime, Foundation Victor of 1956 and Foundation Valour of 1958 are still operating. The latter is running in the fresh water of Lake Superior and so may be expected to last "forever". The former is still in salt water but seems equally indestructable. Both are powered by the durable Fairbanks Morse engines, which, although costly to maintain, are ultimately reliable.

The two tugs replaced low power steam tugs and were quite successful because they were big and heavy. Their 1280 bhp single screw configuration was typical for the time and was  quite adequate for the ships calling in Baie-Comeau and Sept-Iles.

The opening of the St.Lawrence Seaway in 1959 was foreseen and larger ships were built to run to and from the Great Lakes. It was chiefly to handle these, but also large foreign flag ships at the two St.Lawrence ports, that the two tugs were built. 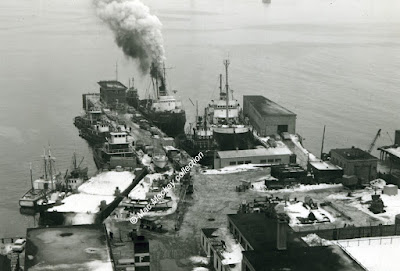 This ca. 1958 winter view of the tug dock shows Foundation Victor on the north side (left of photo) of the dock with a small low power tug, and possibly a US tug. On the south (right) side is the seagoing Foundation Frances blowing down its boilers, and the steamer Banscot ahead of it. At the salvage dock, Foundation Josephine II awaits an assignment.

In the 1950s and 1960s Halifax was a winter port. Ships were diverted from the St.Lawrence for the winter months due to ice and these two tugs were quite capable of handling the typical general cargo ships and tankers of the time, and more than adequately displaced the steamers and low powered Ban tugs. It was not until the mid to late 1960s that winter navigation on the St.Lawrence became possible. 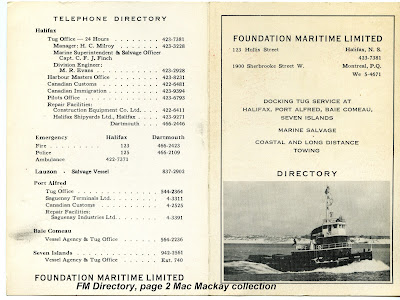 Foundation Victor was the pride of the fleet when it was built.

In the early 1960s Foundation Maritime again sought to upgrade its fleet, and that will be the subject of later posts in this series. 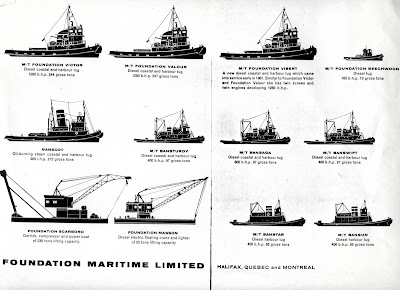 As of circa 1961 this was the FM harbour tug and crane fleet.
Foundation Vibert was built for Baie-Comeau and will be the subject of a future post. The Banscot and the two small tugs on the lower line worked in Halifax. The three "Bans"on the middle line also served in Port Alfred .
The Foundation Beechwood was used in marine contruction work and is named for the Beechwood dam on the upper Saint John River where it worked.

When Foundation Maritime sold off its marine operations to Marine Industries Ltd of Sorel, QC, forming MIL Tug in 1968, new tugs were already planned for the port of Sept-Iles. By the time the MIL Tug operation was re-sold to Smit snd Cory in 1971, the new tugs were under construction. Pointe aux Basques and Pointe Margurite were twin screw, 4,000 bhp, icebreaking tugs that completely outclassed the Valour and Victor.

Marine Industries Ltd had stripped many of the useful assets from Foundation to support the dredging operations (J.P.Porter and Dragage Richelieu Dredging).  MILTug however was kept as a free standing operation and most of the tugs that remained with MILTug went to Smit and Cory. (The salvage tug Foundation Vigilant was sold off.) 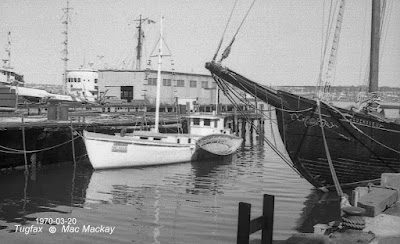 Foundation Vigilant, at the salvage dock, was not wanted by Smith and Cory, so was sold off. The salvage dock and shed lasted, although unused, until 2020 when they were demolished. Bluenose II, on the right at the Oland's pier, has also found a new berth and the entire area has been filled in for a new development. That is either Point Victor or Point Valour peeking out of the left side of the photo.

Foundation Victor and Foundation Valour were transferred to Halifax for year round operation, and in 1973 renamed Point Victor and Point Valour by Eastern Canada Towing Ltd (ECTUG) which had been formed by Smit and Cory. By this time Halifax already had sufficient tugs to handle port operations so Victor and Valour were actually surplus to needs. (ECTUG was really only interested in terminal operations, so did not actively seek salvage or general towing work for its tugs.) The tugs were also a bit too large and ungainly to work within the confines of the finger piers.

By 1977 ECTUG decided to sell the Point Victor and C.A. Pitts Engineering Ltd of Toronto acquired the tug. The company had marine construction projects, and like Foundation before it, decided it needed its own tug. Renamed Kay Cole it worked all around eastern Canada. 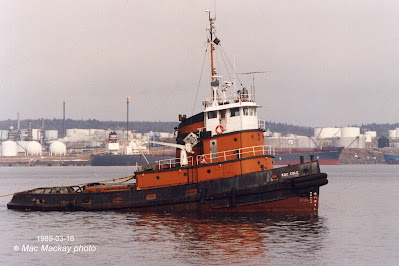 In 1995 Pitts was merging with other companies and a tug was not in the cards. McKeil Workboats of Hamilton, ON was a willing buyer.

They soon renamed the tug Jerry Newberry and put it to use in ways never foreseen by Foundation including barge towing to the US East Coast. 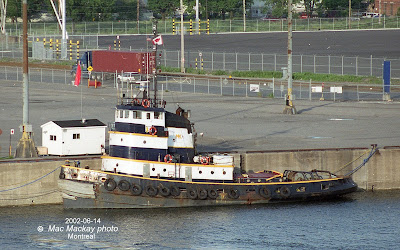 Fitted with some added bow fendering (in place of large truck tires) the Jerry Newberry tried its hand at ship berthing in Montreal for a time.

McKeil in turn sold the tug on to McNally Construction of Hamilton, ON and the tug kept its name.

They put the tug to some extreme use including trips to Labrador and Ungava Bay but by 2013 they were not finding enough use for it. New owners, from Newfoundland, named Sealand Shipping Services Ltd of Baie Verte, bought the tug and renamed it R.J.Ballott. They also added a towing winch I believe. 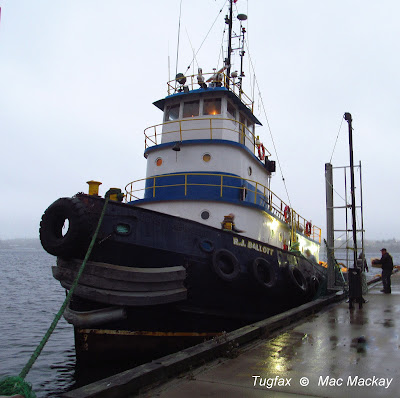 As of 2021 the tug was in regular use including a tow to Montreal. The tug often works in Labrador and the north shore of the Gulf of St.Lawrence, so is well out of the spotlight, but continues to provide service.

POINT VALOUR
Point Valour lasted a bit longer with ECTUG, but was also sold on. It is easily identifiable because of its slightly larger wheelhouse. I believe the large house was needed to accommodate the radar set which HAD become mandatory. There was no real need for a walkway ahead of the wheelhouse, except to clean windows, so the wheelhouse was enlarged forward by a foot or two. 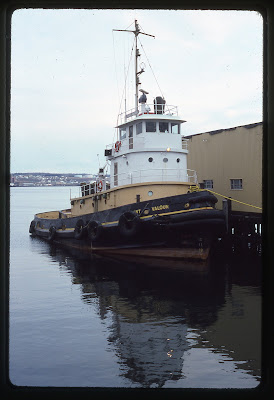 As modern tugs came into service, shiphandling using a tow line became obsolete, and so did tugs like the Point Valour as they only had power ahead. They could not pull back with any power like the ASD tugs could. 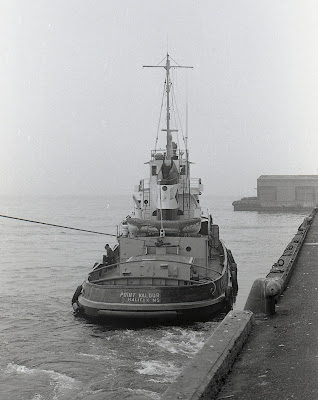 ECTUG finally sold the Point Valour to Thunder Bay Tug Services Ltd and it went into operation at the Lakehead. 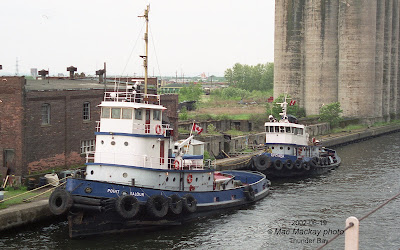 Huge amounts of power are not needed in Thunder Bay as ships are limited to St.Lawrence Seaway size (the US flag 1,000 footers do not serve Thunder Bay, ON). Point Valour is still a big tug and its weight is still useful. (Thunder Bay is home to several tugs built in the 1940s, some of which are former Foundation boats. The Glenada in the photo above was built originally in 1944.)
.