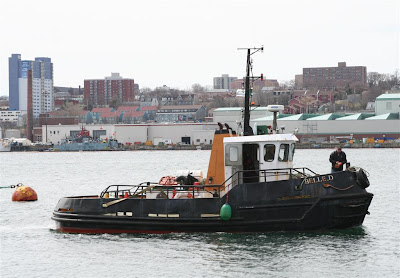 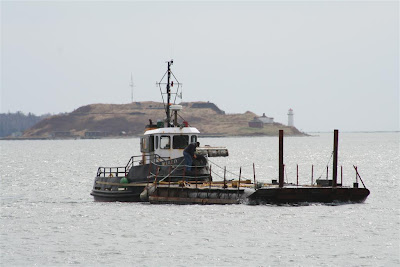 The small tug Belle D. has been working in Halifax all winter on a variety of jobs.
She was built in 1967 by Fercraft Marine Inc of Cote Ste-Catherine, QC as Boatmen 4. She worked for Montreal Boatmen, based in the eastern end of Montreal, servicing the anchorages with water and stores barges. She was rebuilt in 1989.
Picked up by the Irving group of companies in the 1990s, she became Stenpro IV, and was based at their ship repair yard, Steel and Engine Products, in Liverpoool. NS.
She then became Belle D. (for Belledune, New Brunswick) and was registered in Bathurst, NB. She worked in Belledune, Dalhousie and Bathurst, and other places as needed.
This winter she has been working with divers on the accommodation rig Chemul at Irving's Woodside yard as well as doing barge work on a daily basis to McNab's Island. Her crew seems to come from RMI Marine, and she has been based in Eastern Passage, but coordinates with Le Grow's Marine as well.
Posted by Mac at 10:20 PM