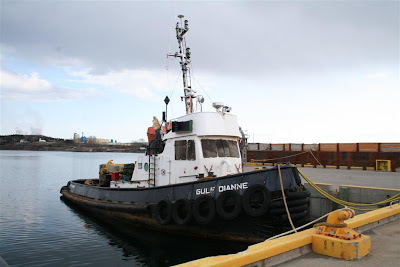 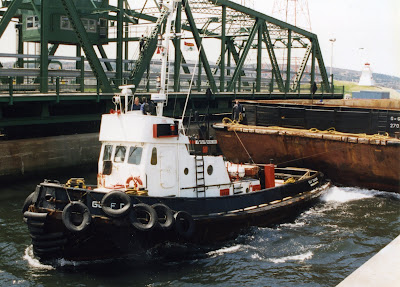 It was nice to see the tug Gulf Dianne again even if she is still in winter layup. The tug spends the shipping season shuttling gravel barges from Cape Porcupine, Nova Scotia to Prince Edward Island, but this winter she was laid up in Port Hawksbury where I caught her on Thursday.
She is an unusual tug for this coast, due to her distinctive open flying bridge.
This is a a west coast tug feature, and indeed Gulf Dianne was built on the west coast as Gulf Diane in 1962.
She came east in 1968 as deck cargo on one of her gravel barges, G of G 270, bedded in a load of limerock. That barge and the other barge G of G 271 were towed by Gulf Joan to Halifax, where Gulf Diane was unloaded. [see previous posting on Gulf Joan.]
She was employed by Gulf of Georgia Towing's "Fleuvetow" venture in Quebec, working from Stephenville, Newfoundland, among other places, carrying aggregate.
When that venture folded in 1976, she was sold to Mariner Towing of St.Eleanor's PEI and in 1985 the second "N" was added to her name.
She has been on the PEI gravel run ever since. She tows one barge while the other is loaded at Cape Porcupine.
And in case you wondered- yes the flying bridge is used. In the May 22, 1995 photo she is transiting the Canso Canal eastbound, towing G of G 270 with two men on the flying bridge, conning the tug and barge.
Posted by Mac at 8:14 PM