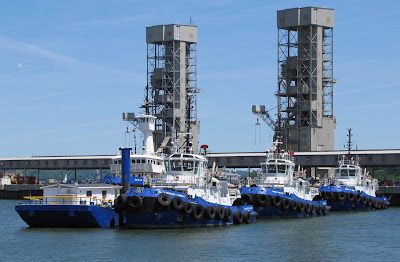 While in Quebec City last week end I did not see any tugs in action, but there were lots of tugs and workboats in evidence. Groupe Océan's harbour tugs were lined up neatly at their berths in the outer Louise Basin. All three were built at East Isle shipyard in Georgetown to the same Robert Allen design.
Ocean Bertrand Jeansonne, Ocean Henry Bain and Ocean Keith Rusby are at the ready for berthing a tanker expected later in the day.
Also tied up at Oceans' float is Ocean Delta, their big sea going tug.
Posted by Mac at 10:53 AM