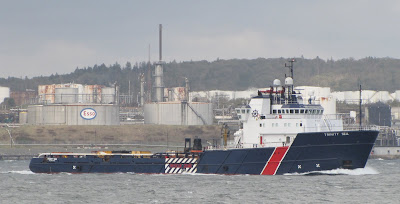 It was a blustery late afternoon in Halifax with high winds and showers. There was lots of action in the harbour and the tugs were kicking up spray as they went about their business.
The tug/supplier Trinity Sea didn't seem much bothered by the chop as she sailed for Sable Island.
Trinity Sea was built in 1983 as Neftegaz No.2 in Poland for the USSR's oil monopoly. Secunda Marine rebuilt her in 1999 to her present configuration and she has worked in Newfoundland and Nova Scotia since then.
Secunda Marine was acquired by McDermott International in 2007 and now operates as J. Ray McDermott Canada Ltd.
Posted by Mac at 10:11 PM