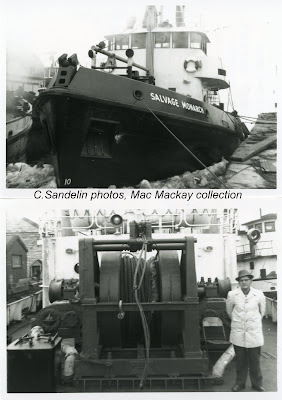 1. As built, Salvage Monarch had a huge steam winch aft, and a smaller one forward. Also a derrick and a chain stopper for ground tackle forward. Photo taken at Kingston, ON ca. 1960. 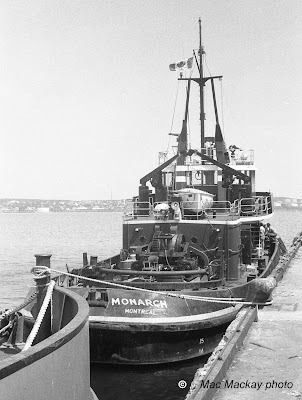 2. By 1971 the big steam winch was gone, and Salvage Monarch was set up for towing. Seen here in Halifax after towing a retired ferry from Sorel. 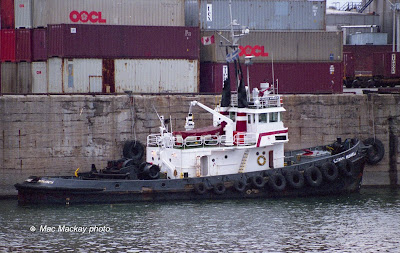 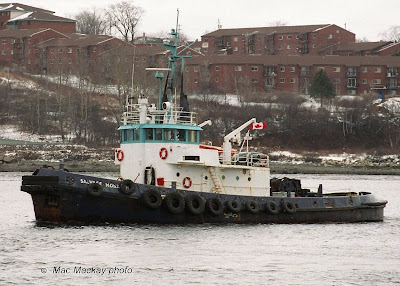 Word has reached Tugfax that the veteran tug Salvage Monarch is in refit for new owners in Toronto. According to our close personal friend Charlie Gibbons, Toronto Dry Dock recently purchased the tug, which has been idle for some time. This is great news for a tug with a long and interesting history.
P.K.Harris of Appledore, North Devon, UK built the tug for Pyke Salvage & Navigation of Kingston, ON in 1959 in preparation for the opening of the St.Lawrence Seaway that year, and the expected increase in size and number of ships needing salvage assistance. As with many tugs of the era from that yard, it had the new hydroconic (hard chine) hull form developed by Burness Corlitt. The hull was also strengthened for operation in ice.
The 97'-8" long craft was powered by two 8 cylinder Lister Blackstone engines geared to a single screw shaft producing 23 tons bollard pull. It was fitted with an 80 ton steam wrecking (and towing) winch aft and a 15 ton steam winch forward, powered by a 4,500 lbs per hour steam generator. (Apparently electric and hydraulic winches were not up to the game.) There was also a derrick mounted forward of the house, and a hold forward for salvage gear.
At the time of her delivery Pyke was a wholly owned subsidiary of Federal Commerce & Navigation Co Ltd [now Fednav], but Pyke had joined forces with McAllister Towing of Montreal to form McAllister Pyke to service the Seaway.
The Pyke operation had various salavge craft with names such as Salvage Prince, and Queen and is notable that this tradition has been respected through several owners.
Salvage Monarch towed the incomplete tug Stranton from the England to Sorel, where it was completed at Cathy McAllister. (It has since been rebuilt as Ocean Golf and is stationed in Toronto.)
Eventually McAllister took over Pyke completely and by 1962 Salvage Monarch was owned by McAllister Towing & Salvage Ltd.
Many were the salvage jobs, scrap tows and miscellaneous chores the tug performed through the years. Usually confined to the waters of the Seaway, she did make some trips further afield. As time went on she became less of a salvage vessel and more of a tug, and the forward winch and derrick were removed and the after winch was replaced.
Salvage Monarch's first visit to Halifax that I know of was in 1971 when it towed the retired Sorel ferry Napoleon L, which it handed over to the Gulf Joan, which in turn towed the ferry to British Columbia for further service.
When McAllister sold its business Salvage Monarch was mostly a harbour tug in Montreal, but new owners Groupe Océan looked farther afield for work. In the winter of 2000-2001 the tug was based in Halifax on charter for cable protection work.
In 2002 Heritage Harbour Marine of London, ON bought the tug and fleet mate Cathy McAllister ex Charlie S., which it renamed Seven Sisters. It was later sold and became Doc Morin and is presently being broken up at St.Catharines, ON.
Salvage Monarch saw some service under Heritage Harbour ownership, but it was laid up and has been for sale for several years.
It is good to see that the tug will be given new life. Thanks to spending most of its life in fresh water, it will certainly last for a few years longer.
.
Posted by Mac at 12:14 AM