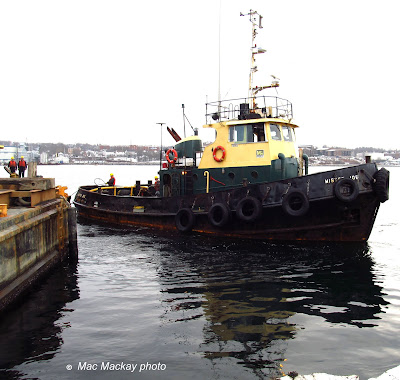 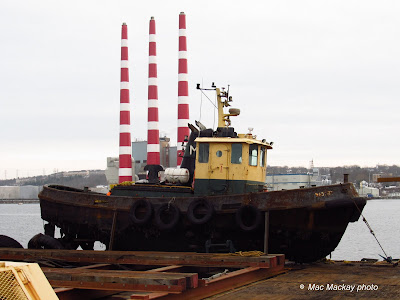 2. On deck is Whitby, much in need of hull cleaning. 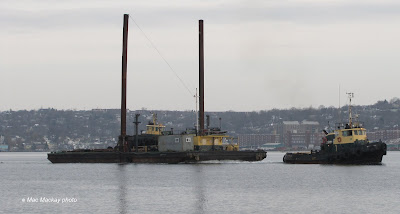 3. The barge is on a short tow line until clear of the harbour. 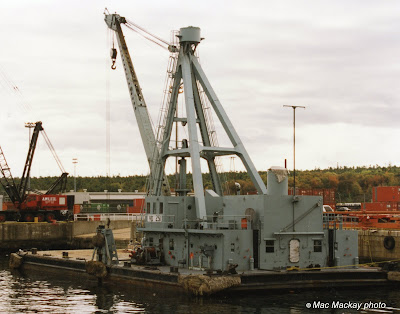 4. Beaver Kay was built as YD 251 a steam derrick for the naval dockyard. What looks like a gun tub as the top of the derrick was a fire monitor. Photo October 10, 1995 at pier 35.

After a hard summer's work the various dredging and marine construction fleets are getting ready to go into the barn for the winter.
This morning the tug Mister Joe sailed form Halifax towing the Beaver Kay with Whitby on deck. Yesterday a crane was offloaded from the Beaver Kay and positioned on the new pier C extension at Halterm where it will continue the work from the land side. Whitby was also working steadily on the pier C project, but will not be needed now.
These vessels all belong to McNally Construction Inc, which, since July is a wholly owned subsidiary of Weeks Marine, Inc of Cranford, New Jersey.
Mister Joe started life as the Churchill River in 1964 at Russel-Hipwell Engines in Owen Sound ON. Built for the Hudson Bay Company it worked for them in the far north until sold to work on the Hibernia project. It moved to Beaver Marine in 1997 and was renamed when Beaver was integrated into McNally. It is a twin screw tug of 750 bhp.
Whitby was built in 1978 by and for McNamara Construction. McNally took over that operation and the tug has worked all over eastern Canada. It is also twin screw with 474 bhp.
The senior citizen in the bunch is Beaver Kay. Built in 1953 by Geo. T. Davie & Sons Ltd in Lauzon, QC, it was the steam crane YD 251 and worked in the HMC Dockyard in Halifax until 1995. Beaver marine acquired it in that year and removed the crane derrick and all the steam machinery, leaving a small portion of the deck house. It was registered for the first time in Halifax December 17, 1996 and named Beaver Kay. It is a very wide (115 feet long x 60 feet wide) and stable hull, and makes a good working platform for some very big cranes for dredging, pile driving and other work.
The little flotilla is headed for Point Tupper where McNally has its maintenance base. Whitby needs a good shave and a haircut, and there is work to do on Beaver Kay too. Mister Joe usually keeps running until December.
.
Posted by Mac at 10:59 AM