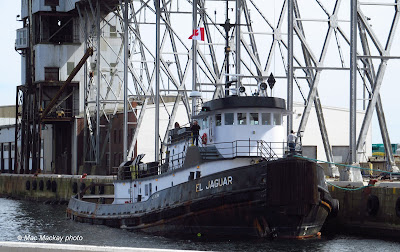 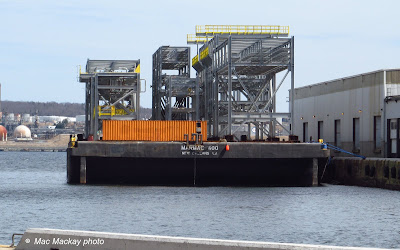 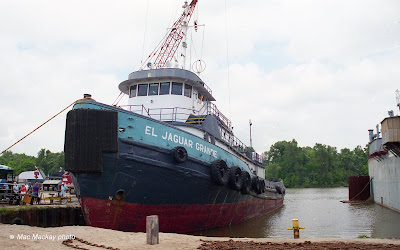 The US tug El Jaguar arrived this morning with the barge Marmac 400 in tow. The barge is carrying another load of metal fabrications for the Long Harbour nickel smelter in Newfoundland. At 5,805 gross registered tons, the barge was built in 2001.
The tug was built in 1976 by Burton Construction & Shipbuilding in Port Arthur, TX as El Jaguar Grande for Twenty Grand Offshore. It is powered by two 16 cylinder GM EMDs totalling 3900 bhp. Now owned by Oregon Sealark LLC it is part of the Brusco fleet which has the contract to transport these components from the Gulf of Mexico to Newfoundland.
The tow experienced fierce headwinds on its trip north, and will likely take bunkers while in Halifax. Normally the tug would take bunkers at Argentia outbound from Long Harbour. McKeil Marine are agents.
This is the third of the Brusco tugs to call in Halifax this season.
See: Gulf Cajun, Febvruary 17 and 21.
See: Richard Brusco, February 24.
Another member of the fleet, Mary Brusco, has by passed Halifax.
.
Posted by Mac at 2:28 PM