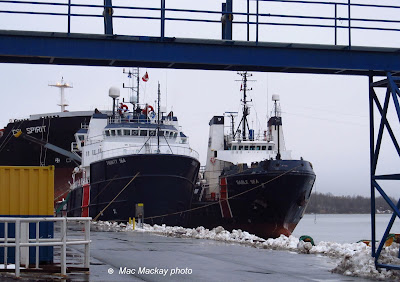 The former Secunda Marine Services of Dartmouth has new owners. Founded in Dartmouth, it was sold in 2007 to McDermott International, but has now been repatriated to Canadian ownership by Birch Hill Equity Partners LP of Toronto.
Renamed Secunda Canada LP, the company will own ten platform supply/anchor handling/ tug/ standby vessels. A further four ships were not in the deal and will remain with McDermott. McDermott is engaged in offshore construction and will keep Agile, Bold Endurance, Emerald Sea and Thebaud Sea. [the latter would qualify as a Jones Act vessel since it was built in the US.]
Each of the remaining Secunda vessels has been re-egistered from McDermott Canada Ltd to single ship Nova Scotia numbered companies. These are: Acadian Sea, Burin Sea, Hebron Sea, Mariner Sea, Panuke Sea, Sable Sea, Trinity Sea, Ryan Leet, Venture Sea, and Intrepid Sea. The first of these is not registered in Canada and the latter is an un-refitted former Russian supplier, lying at pier 9 C.
Press reports indicate that the company will concentrate on offshore Atlantic Canada, while previously, under McDermott, they operated world-wide.
.
Posted by Mac at 4:09 PM