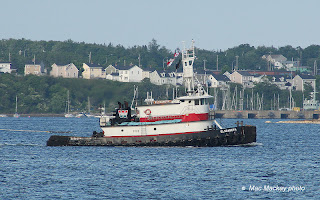 The US flag tug Elizabeth made one of her very quick visits to Halifax July 5 to 6. As usual this was to load steel fabrications from Cherubini Metal Works at their pier in Eisner's Cove. The tug, with barge Weeks 297 arrived in the very wee hours of Thursday July 5 and loading commenced almost at once. The barge was aligned with the wharf at high tide to allow the fabrications to be driven on to the barge using several Mammoet multi-axle powered trailers.
After securing the load, the pair sailed early this evening.
The tug was built in 1984 as Kitty Hawk, but was acquired by Weeks Marine Inc of New Jersey and renamed. It is a typical southern US design tug, with a small elevated wheelhouse for pushing work. It is rated at 2000 bhp with Cat engine.