On  a July 1 weekend trip to Quebec I was pleased to see a veteran tug once again. The annual maintenanace dredging at Rivière-du-Loup was well underway with the dredge Océan Basque 2 and the  small tugs Océan Uannaq* and Océan Nigiq handling a pair of dump scows. Lashed to the dredge was the tug Service Boat No.2 ex Weymontachingue, built back in 1934 by Canadian Vickers Ltd  in Montreal.
Ordered by the Shawinigan Engineering Co, along with sister tug R.F.Grant they were 65 footers, of 90 gross tons, and were for use on the St-Maurice River in log towing operations, with ownership passing to the St-Maurice Boom & Driving Co Ltd of Trois-Rivières.
(Weymontachingue is the name of a First NatIons reserve on the upper reaches of the St-Maurice River, north of La Tuque-http://itouchmap.com/?c=ca&UF=-575821&UN=-812732&DG=RESV)
In the 19xxs Three Rivers Boatmen bought the pair and rebuilt them for use on the St.Lawrence. With new deckhouses, they measured 74 gross tons. Weymontachingue was renamed Service Boat No.2 but R.F.Grant retained it name. Three Rivers Boatmen operated the pilotage and tug service in Trois-Rivières, and serviced the nearby anchorages with boatman services.
When Three Rivers Boatmen acquired Sam Vézina Inc., providers of pilotage and boatman service in Quebec City, Service Boat No.2 went there. Eventually Groupe Océan bought Three Rivers Boatmen and Vézina. When acquired Dragage St-Maurice the tug was assigned to support dredging operations and marine construction. R.F.Grant seems to spend all its time in the Beauharnois area, above the power dam, but Service Boat No.2 travels the waters of the St.Lawrence.
The two modern tugs Océan Uannaq* and Océan Nigiq were built in 2008 by Industrie Océan at Ile-aux-Coudres and were initially used for barge lightering at the Baffinland iron  mine project in the arctic. They ferried the first test loads of ore out to waiting ships. Since that project has been on hold, the tugs have been lashed up to dump barges. At 770 bhp and twin screw they are more than up to the job.
Most Océan tugs are now owned by Location Océan Inc., and leased or chartered to the various Océan divisions for work. 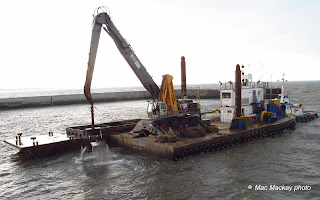 1. Dredging silty sand is an annual requirement at Rivière-du-Loup. Océan Basque 2 has been the dredge for the last few years. 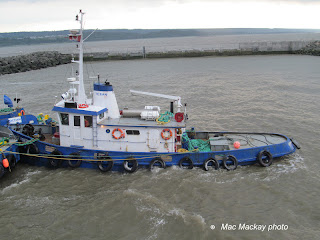 2. This year the tug Service Boat No.2 is lashed to the dredge for the frequent moves required to work around the ferry slip. 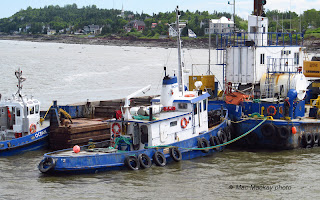 3. Some of the tug's riveted construction is still visible around the bulwarks aft. 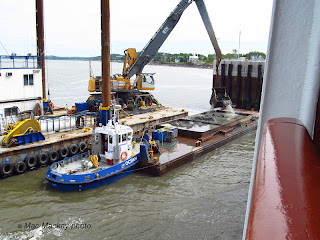 4. The tugs Océan Oannaq and Océan Nigiq are connected to the dump barges, but do not compensate for the barges' draft. The tug is on an even keel when the barge is loaded. 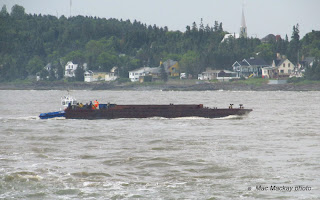 5. When the barge is empty, the tugs are well up at the bow, but still appear to perform well, even in choppy conditions. Rivière-du-Loup is totally exposed to westerly winds, with a fetch of well over 20 miles to the nearest land in that direction, explaining the heavy silt build up.