1. Siberian Sea arrived off Halifax towing the barge Columbia. After the pilot was aboard she moved to the push position. 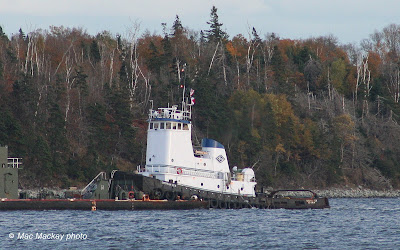 2. Using a shallow notch, the tug pushes with traditional face wires to hold its position.

The US flag tug Siberian Sea (ex Heidi C. Roehrig, Matthew, Star Avjet, Texaco Avjet) arrived this afternoon with the fully loaded bunkering barge Columbia (4,286 gross tons, built 1993) all the way from New York.
Due to the unavailability of low sulphur bunkering fuel in Halifax, the operators of the tanker Kometik and Maatea ordered in the fuel. The tug and barge came alongside Komitek this evening and when completed the tanker Mattea will come in from an outer anchorage for her fuel.
The tug was built in 1980 by Jakobson Shipyard in Oyster Bay, NY, builder of many east coast US tugs over the years. It is fitted with a very high wheelhouse, to permit visibility over her barge when it is in ballast.
Owned successively, after Texaco, by Weeks Marine, Roehrig, and K-Sea, ownership is now listed as Kirby Offshore Marine Operating LLC. Kirby acquired K-Sea, making it one of the largest tug/fuel barge operators in the US, merging Kirby's intracoastal and river fleet with K-Sea's harbour and sea-going units.
The tug is powered by a pair of V-12 GM EMDs, giving 3,000 bhp through two fixed pitch open screws.
Posted by Mac at 10:04 PM