World's Most Powerful Tug (for a time) 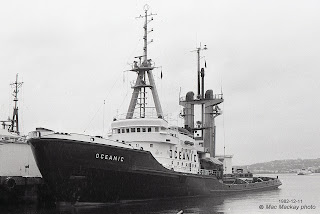 1. Oceanic alongside Purdy's wharf after a rig tow.

A pair of German tugs held the title for most powerful tug between about 1969 and 1976.
Built in Bremerhaven for Bugsier-Reederei-und Bergungs AG, the Oceanic and Atlantic initially had two 16 cylinder KHD engines giving 12,800 bhp through twin screws. In 1975 their bollard pull was increased to 152 tonnes when the two controllable pitch props were fitted with nozzles. (They also had three rudders)
in 1985, long after they had relinquished their titles, they were re-engined with a pair of new 16 cylinder Duetz diesels giving 13,190 bhp total, but burning heavy fuel. The bollard pull was then rated at 160 tonnes.
In 1993 the Arctic was sold to become the pirate radio station Arctic Research while Oceanic had entered permanent layup and conservation in their home port of Bremerhaven.
The tugs were designed as ocean-going salvage and firefighting tugs, and as such could their design speed was 20.5 knots. They were also fitted for long distance towing, and that is how Oceanic arrived in Halifax on December 7, 1982, with the semi-submersible drilling rig John Shaw on the end of a tow line.

2. Oceanic sailing light, with the rig John Shaw in the background.

3. The large funnel was a fake. The twin derrick posts are also exhaust uptakes and support a boom for line handling. Note the tow line stretched taught across the after deck.

Oceanic was delivered by the builders on June 6, 1969 (the hull was built by Rickmers Rhederei, and tug completed by F. Schichau) and arrived in Halifax August 30, 1969, having already delivered an oil rig to Sable Island.
Posted by Mac at 4:14 PM