In the early1900s what was to become the Aluminum Company of America was attracted to Canada by abundant hydro-electricity potential in Quebec. Alcoa's founder Arthur Vining Davis, established power dams and aluminum smelters (one in a town modestly named Arvida for the first syllables in his name) in the Saguenay region and spun off the Aluminum Company of Canada Ltd in 1928. Part of the development was construction of a railway and the port of Port Alfred on the La Baie de Ha Ha- the head of navigation for large ships.(Smaller ships can continue upstream to Chicoutimi.) 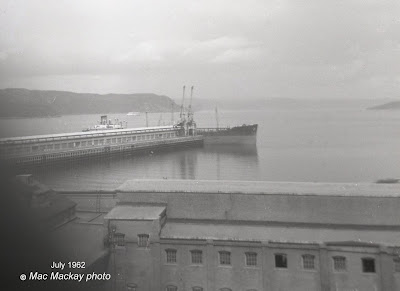 (The photo was taken from the Consolidated Paper Company's mill (now gone). A Canada Steamship Lines "white ship" cruise ship can be seen in the background (also long gone). It will tie up at the Bagotville government wharf.)

Several of the timber piers on Baie de Ha Ha are in the town of Bagotville. (A few kilometers inland is CFB Bagotville a Canadian military base, housing jet fighter aircraft and other Air Force activities.)
With development of the port came the need for tugs. There have been tugs on the Saguenay River since the earliest days of steam in Canada.Used mostly for log boom towing, and ship towing they also performed ship assist work. Price Navigation (part of Price Brothers paper) kept the tug Chicoutimi from 1921-1941, but it was primarily a towing vessel.
After World War II with the expansion of the aluminum business and the paper industries, dedicated docking tugs were needed. Foundation Maritime had two Glen tugs on summer station on the Saguenay, usually docking at Bagotville.
2. Bansturdy and Banswift are tied up to the goelette Dan B, with Bergeronnes Transport at the quai Lepage in Bagotville. (Mac Mackay collection)

As mentioned previously Alcan decided to build their own tugs in the early 1960s, and Bagotville and sister Port Alfred were the first ones. Both built by Verreault Navigation Inc at Les Méchins, QC, they were 65 footers, with 680 bhp on one screw.

It was very soon apparent that these tugs were under powered, and so Port Alfred was sold. Its trip to Vancouver was memorable to say the least. It went aground soon after leaving port, endured a hurricane off Cape Canaveral, terrorists in Jamaica and numerous mechanical breakdowns due to tropical water temperatures, for which it was not built. (The Saguenay is one of the coldest rivers in Canada, and engine cooling can be accomplished with ease.)

4. On the west coast, it served as Island Trojan to 1970 then Seaspan Trojan until its register was closed in 2004. It was right at home on the Fraser River, with a winch and flying bridge.
Photo:Mac Mackay collection

A new Port Alfred II followed from Ferguson Industries in Pictou, NS in 1969. It was an 86 foot, 900 bhp single screw tug fitted with a Hodi steering nozzle.
Sold in 1972, it went to Omnimar, the operators of Sorel Tug Boats Inc and was renamed Omni-Richelieu. When Groupe Océan took over Sorel Tug Boats, it was not renamed.It has been reassigned in recent years to Ocean Tugs Ontario and is based in Hamilton, ON and serves that port, Toronto and Oshawa.

5. As Omni-Richlieu in a previous Océan colour scheme.

In 1969 Alcan ordered the revolutionary Grande Baie from Georgetown Shipyard in PEI (at the time operated by the PEI Industrial Corp). The first Voith-Schneider tug built for commercial service in North America it is powered by two 8 cylinder Nordqvist+Holm engines giving 2400 bhp. It had an aluminum house, which remained unpainted throughout its career with Alcan. With Port Alfred becoming a year round port in 1968, the tug's only drawback was its inability to work in deep ice. 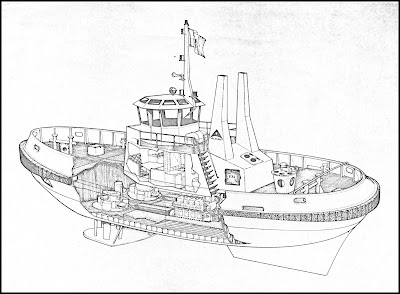 6. The Voith-Schneider fleet at Powell Wharf.

With ever large ships arriving, it became necessary to order an even larger tug, and Alexis Simard joined the fleet in 1980. Also Voith-Schneider, it was significantly larger at 3290 bhp, delivered by two V-8 MLWs. Georgetown Shipyard also built this tug and it served well. Heavily damaged in an explosion in 1990, it was rebuilt at Ile-aux-Coudres.

7. Gooseneck ducts are used to vent the VS propulsors.

The disadvantage of the two V-S tugs was that they did not operate well in winter. Alcan hired in tugs from Groupe Océan for the winter at considerable expense. After Alcan acquired new tugs Alexis Simard was sold to Groupe Océan, renamed Océan A. Simard and based in Baie-Comeau, which is also an "all V-S" port, with Svitzer's Pointe-Comeau as the other tug. 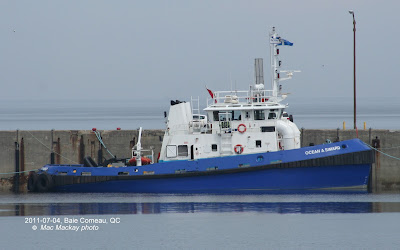 8. Ocean A. Simard in current Océan colour scheme at Baie-Comeau.

In 2007 RioTinto bought out Alcan and became the largest aluminum producer in the world. The new RioTinto-Alcan decided to acquire new tugs for year round operation. They were to some extent forced into the decision when Grande Baie sank at her dock December 31, 2007. Although she was raised on January 8, 2008 she was declared a constructive total loss. Sold to Les Equipement Verreault and towed to Les Méchins, it has never been rebuilt, but its register remains open. 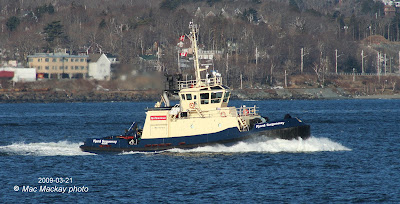 9. Still flying the Danish flag, Fjord Saguenay does trials in Bedford Basin before handing over to RTA.

RioTinto-Alcan (RTA) quite fortunately found two modern ASDs working in Europe that were Georgetown built. By this time the Georgetown Shipyard had become East Isle Shipyard, part of Irving Shipbuilding Inc. They had produced a successful series of ASD tugs based on a Robert Allen design. Several of the tugs were sold to overseas owners. Stevns Iceflower(i) dated from 2006 and was a 5,025 bhp ice class tug with firefighting capability. Danish owners Nordane built the tug for charter, and it worked for Svitzer from 2007 to 2009 as Svitzer Njord before returning to Nordane and reverting to its original name. RTA purchased the tug in 2009 and it sailed back to Canada on its own, arriving in Halifax February 28, 2009. Arriving on one engine, it went into drydock at Irving Shipbuilding's Halifax Shipyard for repairs. It then conducted delivery trials and was handed over to RTA and registered on March 23. Leaving Halifax March 26 it was at work at La Baie on March 29.

RTA then acquired a sister tug, built as Stevns Icecap (i), also built in 2006. Identical in all respects, it was chartered out as Svitzer Nanna from 2007 to 2010, when it was returned to Nordane and became Stevns Icecap again. After the experience of steaming the previous tug on its own, the decision was made to send this one to Canada by heavy lift ship. Thus Fjord Eternité arrived in Halifax on Fairlane on April 4, 2011.   It was offloaded the next day and sailed April 8 for La Baie.

The Saguenay ports of La Baie, and the port of Grande Anse (between Chicoutimi and La Baie) are now well served by two modern tugs, and look to be in good hands for many years to come.