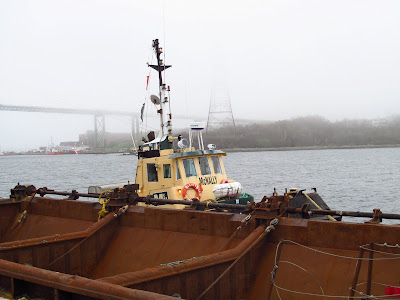 1. Bagotville alongside the mud scow Pitts No.1 at pier 9C

A first time caller to Halifax arrived at pier 9C to tow out a scow. The Bagotville has been around for a good ling time, but I have never seen in it Halifax, In fact it is 29 years (less a week) that I saw it last, and that was in Toronto.
Built in 1964 by Verreault Navigation at Les Méchins, QC, it spent is first ten years working at Port Alfred, QC (La Baie) for Alcan's shipping arm, Saguenay Terminals Ltd. Sagterm decided in the early 1960s that they would operate their own tugs and dispense with the services of Foundation Maritime, and so ordered this tug, and a sistewr called Port Alfred. A modest 65 gross tons, and 850 bhp on a single screw, the tugs worked seasonally in ship berthing. In those days, ships were not as large as they are now and a pair of small tugs could do the necessary work. Alcan's tugs also serviced ships calling at Consolidated Paper's pier and the government wharf at Bagotville.
As ships began to grow, Alcan began to build larger tugs, and sold Bagotville to Canadian Dredge + Dock Co Ltd (CDD) in 1974. The tug was often in Toronto, but worked around the Great Lakes, with CDD's yard in Kingston, ON as home base. [It was that yard that built some of Glen class tugs shown in a previous posting.]

2. Bagotville in Toronto in Canadian Dredge + Dock colours. This was the first (and until today, the only) time I saw the tug.
In 1999 McNally Construction, after absorbing Beaver Marine, C.A.Pitts and McNamara, purchased CDD and Bagotville has been part of their fleet ever since.It is a former Pitts scow, a five pocket mud scow, that the tug will tow out when weather permits.


3. The dump scow Pitts No.1 has not changed its name since acquired by McNally.

While here today, Bagotville repositioned the crane barge Derrick No.3 from pier 9C to Turple's Cove. That scow was built by CD+D in their own yard in 1941 and operated by them until the McNally take over.


4. The crane scow Derrick No.3 is on the inside at pier 9C this morning. By this afternoon it had been moved across the harbour and spudded down in a cove just south of the MacKay bridge on the Dartmouth side. afternoon.