Today Marks the 35th anniversary of the loss of the drilling rig Ocean Ranger and all 84 persons on board. The world's largest semi submersible was working on the Hibernia field 166 miles east of St.John's when it was struck by a severe storm.

The rig was supposed to withstand harsh conditions but a sea broke through a portlight washing out the ballast control room. Unable to prevent further flooding, the crew attempted to abandon the rig in appalling conditions, but did not survive.

A Royal Commission found numerous faults in the design of the rig, inspection, training and safety procedures.

At the time of the loss there were two other drill rigs nearby, Sedco 704 and Zapata Ugland. Both suffered damage, but survived.

All three had standby boats in the area, but there was little they could do but assist in recovering bodies.

The standby boat for Zapata Ugland was Nordertor. Built in 1976 by Hitzler, Lauenburg, it was owned by Offshore Supply Association. 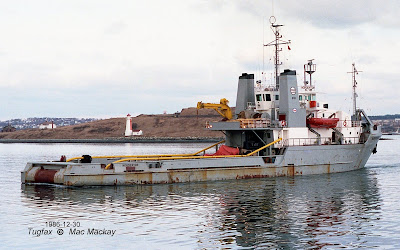 Nordertor was often seen in Halifax, working for Esso. 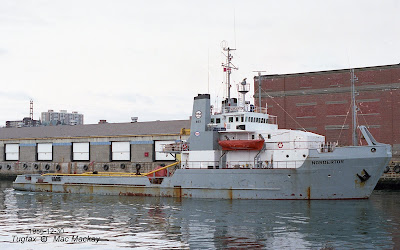 Boltentor at pier 23 in Halifax.

A sister vessel Boltentor was standby for Sedco 704.

Seaforth Highlander was standby boat for Ocean Ranger.
It was built in 1976 by Ferguson Brothers, Port Glasgow, Scotland and was operating for the Seaforth Fednav joint venture.

Seaforth Highlander off the Exxon Mobil dock in Woodside (Dartmouth).

A sister tug/supplier Seaforth Jarl from the same builders in 1975 was lost December 18, 1983 when an improperly secured deck load of chain ran overboard and capsized the vessel. The crew was rescued by Arctic Shiko. 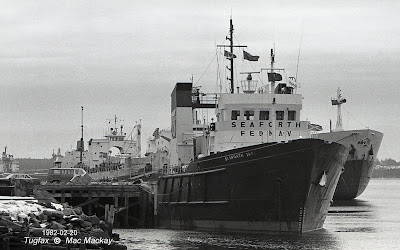 Seaforth Jarl at the Exxon Mobil dock in Woodside (Dartmouth). The tankers Irvingwood (left) and Irving Nordic (right) are tied up at the adjacent Irving Oil terminal in Woodside.

Sixty-five miles to the east the Russian Mekhanik Tarasov was struck by the same storm. On a trip from Trois-Rivières, QC to Leneingrad, it attempted to assist in the Ocean Ranger rescue operation, but took a severe list eventually capsizing February 16 with the loss of 32 of its 37 crew.

The crew of the Atlantic Project were more fortunate. All survived a fire aboard their vessel between Newfoundland and Nova Scotia February 14, 1982. The ship reached Halifax safely February 15, thus escaping the worst of the storm.