Svitzer Bedford has a tow

The Point Tupper based tug Sitzer Bedford has the disabled cargo ship Thorco Crown in tow and should be arriving in Sydney this evening, just in time to avoid the latest incoming storm.
After discharging a cargo of drill pipe in Argentia, NL, the ship was headed for Montreal when fire broke out in the engine room February 6. Although the crew was able to put out the fire, the ship was left drifting 32 nautical miles from Port aux Basques. CCGS Sir William Alexander stood by and made up a tow line to kept the ship from drifting toward shore during the night. 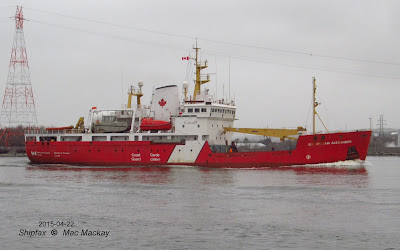 The ship's owners hired Svitzer Salvage to fetch the ship. When Svitzer Bedford arrived on scene it was too rough to take over the tow immediately, but the line was passed on Thursday and the tow began. Initial reports that the ship would be towed to Port aux Basques were soon revised. Sydney is the only appropriate destination, since no facilities exist in the former port to effect repairs. 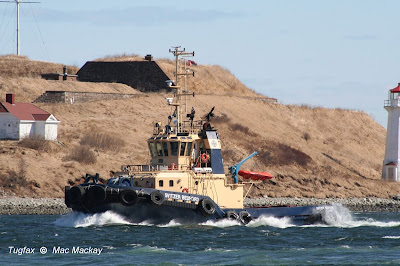 Svitzer Bedford is one of three Svitzer Canada Ltd terminal tugs based in Point Tupper, and is the designated escort tug. A 4895 bhp ASD tug with controllable pitch props and bow thruster, it has a published bollard pull of 56 tonnes. It is also fitted with a towing winch and although rarely used for outside work, it is more than capable of seagoing. It was built by ARSENAV in Chile in 2005 and initially served Halifax harbour before Svitzer transferred its tugs to the Strait of Canso in 2012.

Much has been said in these pages about rescue and emergency towing tugs. The government has also come under criticism for not mandating or equipping the Canadian Coast Guard for emergency towing.
This particular case shows that the Coast Guard can at least help to stabilize a ship until a proper towing vessel can arrive on scene, and that is as it should be.

It must be added however that the Thorco Crown at 7767 grt is a relatively small ship and in truly adverse conditions or in ice even as capable a tug as Svitzer Bedford would be hard put to render assistance to a larger ship. The recent grounding of Arca 1 in the same area was handled well by McKeil Marine but only after the ship was aground. There was no assistance available to the ship during the several hours before the grounding, even though it was also very small.

There should be a large ice class tug on standby in the Sydney area, particularly at this time of year, to respond to emergencies.