Atlantic Beech ex Irving Beech, built 1969, 2250 bhp arrived from Saint John, NB to tow away the barge Atlantic Sealion. As it has been doing for several years, the tug will likely be supporting northern supply to Baker Lake. It ferries cargo from larger ships at the entrance to Chesterfield Inlet on the western shore of Hudson's Bay in to the community of Baker Lake, 150 miles or so inland. 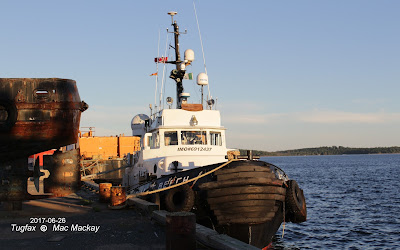 Atlantic Beech with Atlantic Sealion astern at  Woodside.
On the dock at left is the disused Atlantic Chestnut.

Some of the cargo comes to Hudson's Bay via the Atlantic, largely from Quebec. Some cargo came overland to Churchuill, MB, where it was loaded for Baker Lake.
Due to rail wash outs on the Omnitrax line from The Pas, MB this spring, there will be no northern supply service from Churchill, MB this year. All cargo will have to be delivered the long way round via the Atlantic. In fact there will be cargo delivered to Churchill by sea for the town's own use. The town is in desperate need of supplies normally delivered by rail, including propane, food, fule and general merchandise.

The barge Atlantic Sealion (the former Irving Whale) has been used to shuttle components from the Woodside pier to Halifax Shipyard for the Arctic Offshore Patrol vessel construction.

Atlantic Larch arrived towing the pontoon Irving Beaver from Saint John, NB. The Larch built in 2000 and 4,000 bhp used to be stationed in Halifax but has become an "outside" tug used for towing work and now based in Saint John, but traveling widely around eastern Canada. 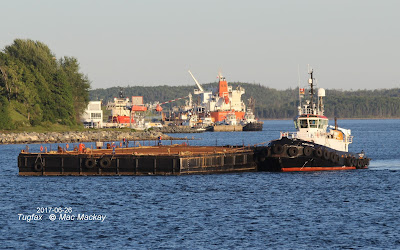 Atlantic Larch wangles the Irving Beaver to a berth at the old Coast Guard Base.
The Woodside docks in the background are full up with the three Halifax based Atlantic Towing tugs, Atlantic Oak, Atlantic Willow, Spitfire III and the visiting Atlantic Beech, the supplier Atlantic Condor (at the Exxon Mobil dock), and the tanker Atlantic Pegasus  at Irving Oil.
(see today's Shipfax)

The pontoon Irving Beaver was built by Saint John DD+SB in 1973 as a floating sawmill and crew camp for work on the Saint John River. When that work ended its deck house was removed and it  became an "unmanned pontoon".  It dimensions are 68.58m x 26.52m and it is gross registered tonnage is now 2190 grt (it was 2702 as built).

I assume it will take the place of Irving Sealion on the shuttle run for shipbuilding components.
The pontoon's name was unique in the J.D.Irving fleet. Tugs were named for trees (softwood for river tugs, hardwood for seagoing, and barges named for marine animals). However all the animals were salt water species, such as Tuna, Whale, Seal, Sealion. Beavers are largely fresh water animals, and Irving Beaver's job was to chew up wood on the Saint John River, that seems an entirely logical  - dare I say whimsical? - choice.
Posted by Mac at 10:32 PM