Craig Trans - another chapter, but maybe not the last

It is time to record another chapter in the saga of the tug Craig Trans but perhaps not the last one.

To summarize the previous chapter. After appearing in Halifax in late 2012 and detained by authorities, the tug kicked around various piers until ending up in Wright's Cove (Lower Burnside) at the old Secunda Marine pier. Since its American owner abandoned the tug, and its crew, a Sheriff's sale eventually went through (for around $1,000) last year, but the tug remained there until Thursday June 1 when it was towed out of Halifax by Dominion Victory and landed yesterday morning (June 2) in the remote port of Marie Joseph on Nova Scotia's eastern shore. (About 175 km NE of Halifax, at nearly 45 degrees N).
With nothing much doing in Halifax harbour today (June 3) I made the 353 km round trip to Marie Joseph to investigate. [I have travelled farther to see a tug, but will not divulge the distance.] 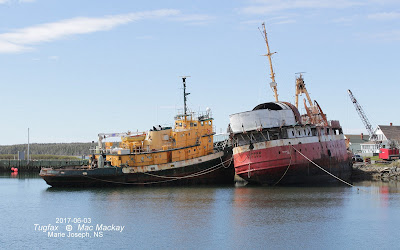 The tug is now beached beside the former Canadian Coast Guard ship Tupper that has been an eyesore there since 2011. (It was also towed by the Dominion Victory).  A resident of Marie Joseph, who lives across the street (which is Nova Scotia Highway No.7), began to break up the ship, but ran into numerous legal hurdles coupled with the collapse of scrap prices. Nevertheless he acquired the Craig Trans ostensibly to scrap it, but perhaps to try to salvage something of value from it. 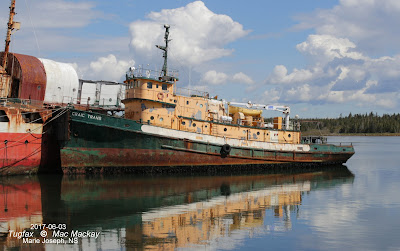 Local residents, mostly inshore fishermen, are quite sick of seeing the partially dismantled ex Tupper, where there has been little activity for more than a year. They told me this morning that the Craig Trans would not be broken up there in their lifetimes, so there may be another chapter in this story.

Interestingly the Canadian government announced new legislation this week to clean up derelict vessels in ports and harbours around the country (more than 600 by some accounts), but it is not clear if the laws would apply to the ex Tupper and Craig Trans which are merely unsightly. 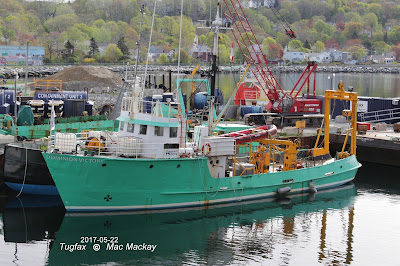 Dominion Victory started life as the trawler Vilmont No.2 in 1965 at les chantiers maritimes de Paspebiac. It was renamed Raymond Moore in 1983 and Alcide C. Horth in 1994 and worked as a research vessel for the Quebec government and the Université de Quebec, Rimouski.
Dominion Diving acquired the vessel in 2004 and since then it has carried out a variety of chores for underwater work including operating an ROV. It has also done it share of towing work, although not strictly speaking a tug.

To summarize the CCGS Tupper's history - it was built in 1959 in Sorel, QC and retired in 1996 having worked out of Halifax (Dartmouth) and Charlottetown for most of its career. It was renamed 1998-05 and sold to an owner that had plans to convert it to an expedition yacht. It was renamed Caruso and registered in Panama, but that was as far as the conversion got. It kicked around various berths in Halifax  and Sheet Harbour, but finally caught fire in Dartmouth October 11, 2008. It was sold to the Marie Joseph scrapper and towed out June 22, 2011.

A brief recap on Craig Trans. Built in 1943 by the Tampa Marine Corp for the US Army it was named LT 648. It was laid up from about 1950 to 1965 until acquired by Foss Maritime of Seattle and rebuilt as Craig Foss. They replaced the original 1225 bhp FM engine with a pair of EMDs totaling 4,000 bhp. The tug worked the Hawaii and Alaska barge runs for Foss. It carried out other work, including a trip to the Great Lakes in 1978.
Foss finally disposed of the tug in 2011 and it became Craig Trans for shadowy owners with Haitian connections. It was involved in scrap tows to Mexico and in 2012 was headed for Beauharnois, QC to take the Kathryn Spirit in tow to scrappers in Mexico. However it was late in the season and it was doubtful if it would make it to the Seaway before winter closing as the tug was losing power. It was diverted to Halifax and detained here for numerous deficiencies by Ship Safety. The Honduran crew were eventually repatriated through charitable donations after the US based owner walked away.

By coincidence, only now is the Kathryn Spirt being demolished in situ at Beauharnois, after several years of wrangling with the scrapper, the municipality and various authorities. The ship was a similar eyesore to local residents.