In Groupe Océan's large tug fleet there are a number of older tugs. That they are still running is a tribute to their excellent maintenance, but also to the fact that many have served a lot of their time in fresh water. In early July two of their elderly tugs were on the slip at Industrie Océan in Ile-aux-Coudres undergoing major refits. 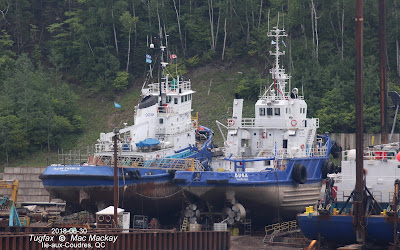 Océan Charlie dates from 1973 when is was built by Davie as Leonard W.  A 3900 bhp twin screw tug, it is ice strengthened. Original owners, were Davie, then owned by CSL, but spun off by Power Corp as Quebec Tugs (QUETUG)  and the original core of the fleet acquired by Groupe Océan. It has almost always been based in Quebec City, and is equipped to serve as a winter pilot boat. 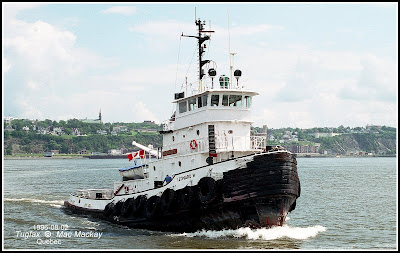 In its Quetugs days, the tug looked particularly sharp with white gunwales.


Duga has quite a different history. Built in 1977, by Rolf Rekdal A/S and completed by Langsten Slip, Tomrefjord, Norway, it is a twin screw 4500 bhp tug. Original owners were Johann Ostensjo  but sold on to Arctic Offshore Marine Services of Hay River, NWT. They in turn sold it to Les Remorqueurs du St-Laurent (Three Rivers Boatmen) of Trois-Rivières. It also did a spell on charter to Atlantic Towing in Point Tupper. In 2002 Océan acquired the Trois-Rivières tugs, and it was later reassigned to Sorel.


Another pair of older tugs were idle in Quebec City. Oldest of these is Jerry G.  Built in 1960 by and for Davie, it is a 960 bhp single screw tug. Based in Quebec City for its earliest years, it was later moved up river and eventually into the Lakes, working out of Hamilton or Oshawa. When Océan brought in more power in its VS tugs for the Lakes, Jerry G. returned to Quebec City where it has been laid up. Now their tug La Prairie has been sent to Oshawa. 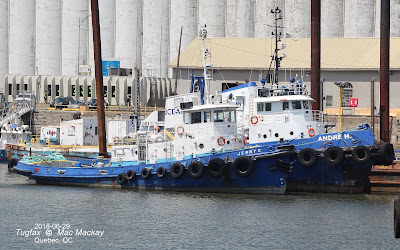 Also laid up for a couple of years in Quebec City is André H. The ex Point Valiant, Foundation Valiant dates from 1963 when it was built by Davie. A twin screw tug of 1650 bhp it was sold by ECTUG to Trois-Rivières/Three Rivers Boatmen in 1995 and entered the Océan fleet in 2002. 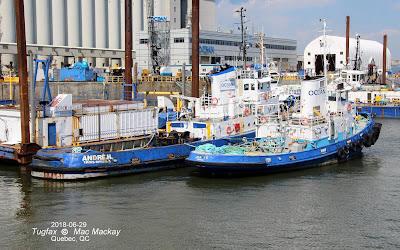 Sadly there is not much of a future for either Jerry G. or André H. due to their age and low power. As they exceed 50 years of age the chances of bringing them up to standard would be a daunting one for any new owner. Howevre with its own shipyard, Océan is in a better position to refit the tugs than ayne else, shold they be needed.

Another older tug with a questionable future is named Océan Brochu, but that is not the name painted on its bow. Built in 1973 as Brochu for Quebec Cartier Mining and based in Port-Cartier, QC for its entire working career, it is a 32000 bhp VS tug. Océan was in the process of acquiring the tug and sister Vachon from last owner ArcelorMittalMines Canada as part of their takeover of Port-Cartier tug services when a fire broke out in Brochu's engine room. The tug was seriously damaged and may well be a total loss. Nevertheless it still appears to be in Océan's possession, and it is said that after being parted out for its sister, now renamed Océan A. Gauthier, it will be scrapped. The Océan prefix has not been added to its name, and its funnel is still in ArcelorMittal orange, lending credence to this opinion. 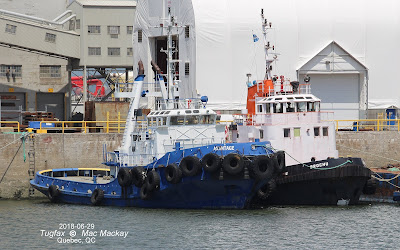 With it is the Avantage, appearing in pristine condition, despite being built in 1969. The former Belgian Sealion came to Canada in 1997 for MTL Marine Tug Inc of Montreal. Remorqueuers Trois-Rivières got the tug in 1999 then it passed to Océan with the acquisition in 2002. The 2160 bhp single screw tug has proven useful in the past but again its age, power, and single screw hold against it. 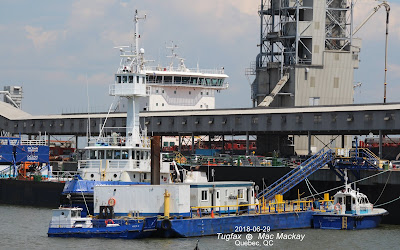 Another veteran tug is Océan Echo II, also built in 1969 a 3,000 bhp twin screw built for barge work and towing.  Some its chip barge work may have been taken up by the cargo ship Jean-Joseph this summer, but it has done some stern escort on laker scrap tows.

Of course there is also the "mega" tug Mega and its bulk barge Motti laid up in Sorel-Tracy for several years. The ATB was acquired for a contract that fell through and has seen only limited use. It has even made some wood chip deliveries to Point Tupper, NS, but with the current state of the paper business,there may be few opportunities for it. Apparently the thought of converting the barge for salt or cement transport did not go very far beyond idle doodling. The tug dates from 1975 and is twin screw, diesel electric of 5500 bhp.

The erstwhile tug Océan Côte-Nord has returned to the work it was built for and is now one of two duty pilot boats in Quebec City. Built as Côte-Nord for the Escoumins pilot staton in 2001, it was renamed in 2014. 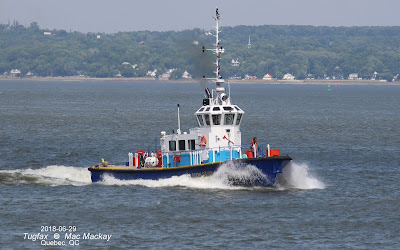 It worked as a tug in Goderich, ON last year, but has since been replaced by the Escorte, a V-S tug, dating from 1967, but again, serving mostly in fresh water. 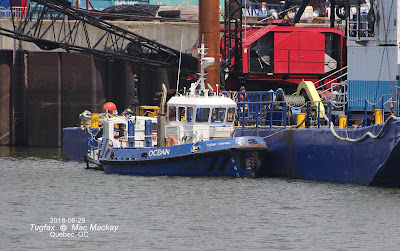 Not an old tug, but one that should be mentioned is Océan Uannaq. One of a pair of tugs built in 2008 for the Baffinland project, it is a 12 grt boat with 770 bhp and twin screws. After service in the far north during the building of the Milne Inlet port, it returned south and was used by Océan's dredging arm to handle spoil barges. In 2015 it was reassigned to work on the Champlain Bridge project. In an unfortunate accident April 1, 2016 it capsized and sank, luckily without loss of life. Although it was soon raised it was declared a total loss. It is now resting in Quebec City, and based on looks alone it seems that it could be repaired and returned to service.

Groupe Océan also has a large fleet of smaller tugs used by its marine construction and dredging arms for a variety of tasks. Some of these may remain out of service for lengthy periods depending on demand, but are then brought back into use when need. Two such tugs are currently on the dock in Quebec City. 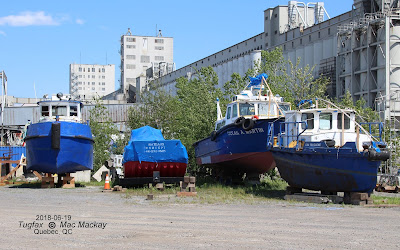 Left  to Right:
- W.D.Indock, built in 192 by Zenith Steel Fabricators of Richmond, BC for Resolute Shipping, a division of Fednav, as Mokka Fjord. Used by them for barge lightering work in the far north, it passed through several owners including McKeil, while acquiring its present name. It was also rebuilt in 1998-99. Groupe Océan got the tug in 2011 after it had worked around the Thorold, ON area for several years. 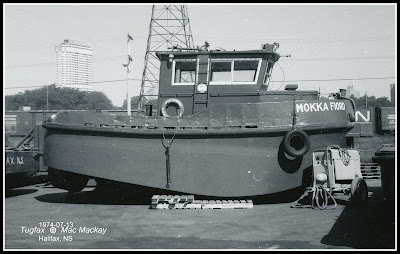 My 1974 photo does not do justice to its then bright red hull. It was at pier 23 in Halifax, waiting to go north on Tundraland.

- Océan A. Martin is an aluminum hull former Escoumins pilot boat. Built as A.Martin by MonArk Boats,  Monticello, AK in 1983,  it was last used as a survey boat for dredging work. 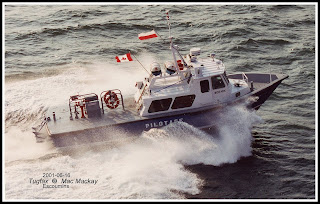 A. Martin at speed off Escoumins as a pilot boat.

- Coucoucache is a typical Russel Bros built winder boat, one of many in the Océan stable. However, since it was built in 1937 it may be one of the oldest. 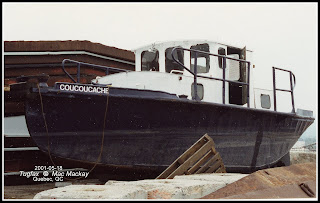 Despite its age, the boat appeared to be in excellent condition when it was acquired by Océan after a career in the Mauricie watershed, handling wood booms.

The boat's intriguing name derives from the Amerindian name for an owl.