The first sign of things happening in Halifax for the salvage of the container ship Yantian Express is the arrival of the tug Atlantic Enterprise. Owned by Donjon Marine Co Inc of Hillside, NJ, it is part of the effort mobilized by Donjon-SMIT the North American joint venture of two of the world's largest salvage companies.

SMIT, is the well known Dutch towing and salvage company founded in Rotterdam in 1842. Then know by the founder's family name of Smit, it evolved over the years as Smit Internationale NV, but since 2010 has been part of the Royal Boskalis Westminster and has been known as SMIT (all caps).
The tug SMIT Nicobar was first on scene after the Yantian Express caught fire January 4. It has continued to provide firefighting assistance but also evacuated the ship's crew and continues to care for then on board. It landed five of the crew back on the ship to attend to its machinery.

The Canadian tug Maersk Mobiliser was hired to assist in the salvage operation. After sailing from St.John's January 5, it arrived on scene January 7 and by the next day had the ship in tow for Halifax.

Donjon Marine was founded by the Witte family  and incorporated in 1966. It has wide interests in marine construction, shipbuilding, ship repair and recycling. It is also continues to be the designated provider of salvage services for the United States Navy in the western hemisphere.

The Donjon-SMIT joint venture was formed to provide marine salvage, lighterage and firefighting services in compliance with regulations emanating from OPA-90 (the US Oil Pollution Act). That act was the reaction to the grounding and oil spill form the Exxon Valdez in Alaska in 1989. One of the outcomes of that act was to require shipowners to have a designated response plan for pollution and firefighting emergencies. 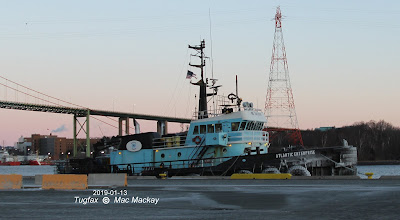 The tug Atlantic Enterprise is Donjon's largest tug, and has participated in many of Donjon's recent projects. It was built in 1976 by Halter Marine Services in Moss Point, MS as Mister Pete for Jackson Marine Corp of Houston. That company evolved through mergers with Zapata, Gulf Fleet, Seahorse and Tidewater until 1999 when they sold the tug to Portland Tug Boat and Shipdocking Co of Portland, ME. Owned by the legendary Arthur Fournier, Portland renamed the tug Pete. McAllister Towing and Transportation took over the company in 2001 and kept the tug in service until 2007.
K-Sea Transportation then bought the tug and renamed it Barents Sea. K-Sea was taken over by Kirby Corp in 2011 and they continued to own the tug until 2016 when it was purchased by Donjon and renamed Atlantic Enterprise. 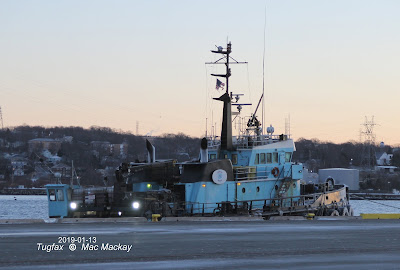 As with most big US tugs of the era it is powered by a pair of Alco diesels, delivering a reported 6,480 bhp. Some sources claim they are V-18s - a very rare 251 model -  but Lloyd's Register shows them as V-16s.