On the move from Shelburne, NS for seal trials to Saint John, NB is the  tug Wavemaster. Owned by Harbour Development Ltd, the dredging subsidiary of Atlantic Towing Ltd, it has re-used a name from the past.


Built for the Royal Netherlands Navy as Regge, the tug was acquired early last year and sailed to Shelburne in March. Since then it has been extensively rebuilt, and in June 2018 was renamed Wavemaster. 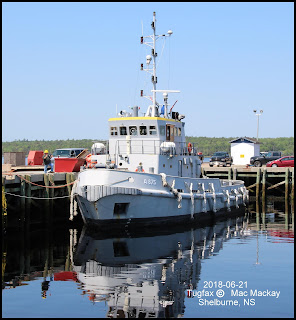 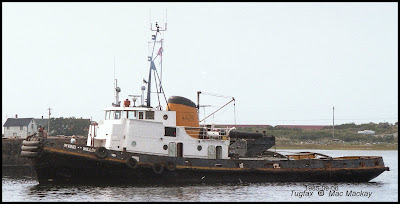 This is the second HDL tug to be named Wavemaster. The first was built in 1958 by J.I. Thornycroft in Southampton, UK for the local Red Funnel Tug fleet. It was powered by two 6 cyl Crossleys giving 1340 bhp with twin screws. Named Dunnose it was one of four similar tugs acquired by Atlantic Towing over the years. In 1980 it was renamed Irving Willow and seems to have been attached to the dredging fleet from early days. Because some of its accommodation was below deck, and no longer permissible for Canadian tugs, the deck house and wheelhouse were modified. Sister tug Atlantic Juniper ex Irving Juniper ex Thorness was not modified and remained a day boat as a result. (It was to be broken up in the last year.) 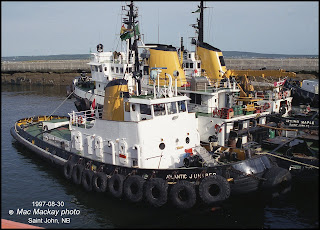 When the J.D.Irving parent company removed the "Irving" name from its tugs in 1996, Irving Willow was renamed Wavemaster. It was laid up in Dartmouth in 1998, and although drydocked in 2004, it was never in service again and was finally broken up in Dartmouth in 2005. 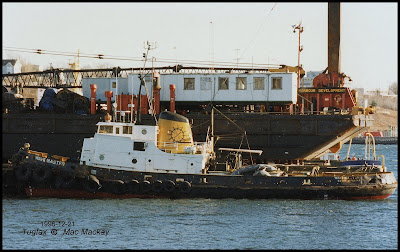 The same tug, as Wavemaster worked with dredges and scows.

Harbour Development has been making do with only one large tug (and small tugs and workboats) since 1998, so it seems likely that the new Wavemaster will be replacing the veteran Swellmaster. Also a Thornycroft- built former Red Funnel tug, it was built in 1965 as the firefighting tug Atherfield. It came to Canada for Atlantic Towing Ltd in 1971 and was renamed Irving Hemlock. It has been attached to the dredging fleet from the beginning, and was renamed Swellmaster in 1996. 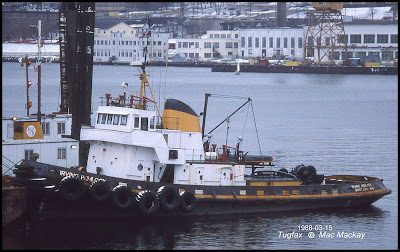 Irving Hemlock still carried fire monitors which were used for washing down scows.

A twin screw tug, originally with two Crossley engines totalling 1340bhp it was re-engined with a pair of 12 cylinder Caterpillars in 1987 giving 2,000 bhp. The new Wavemaster seems to be a suitable  replacement. 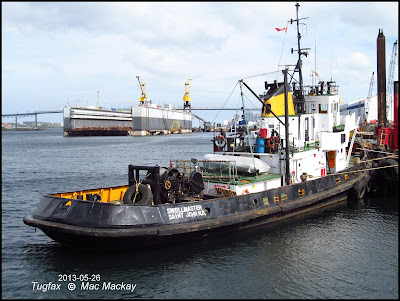 Swellmaster was also equipped with a winch for towing dredges from port to port.

At Shelburne Ship Repair in Shelburne, NS - also part of J.D.Irving and Irving Shipbuilding Inc, I hear that the yard's tug/workboat SSR 3 has been broken up some time ago. 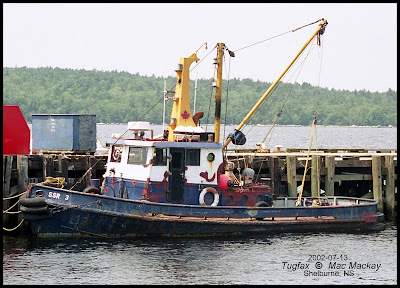 Built in 1964 for Ferguson Industries in Pictou for the Department of Public Works dredging fleet, its original name was Grand Entrée. A 380 bhp single screw boat it was stationed in the Magdalen Islands, but later transferred to Gaspé. In 1996 it was renamed T.5 when DPW put their entire dredging fleet up for sale. Harbour Development Ltd bought the boat and used it for a time. It was then laid up in Dartmouth and when Dartmouth Marine Slips was shut down it was transferred to Shelburne.
It was then renamed SSR 3 but the registered name remained T.5. The shipyard used the tug for working around the slip and as a diving tender, but it was laid up about 2005, and broken up sometime in 2017.

The number of tugs built in the 1950s and 60s is rapidly diminishing, Although about 25 are still listed in the Atlantic Region, several of those are laid up and unlikely to return to service. There are also a few still  listed which have in fact been broken up already.
.
Posted by Mac at 11:30 AM