The 15,500 bhp tug Avalon Sea got underway this afternoon towing the barge BOA Barge 37. The tug was built in 2016 by Remontowna Gdanska in Poland and is equipped for a variety of tasks including anchor handling, ice management and standby. 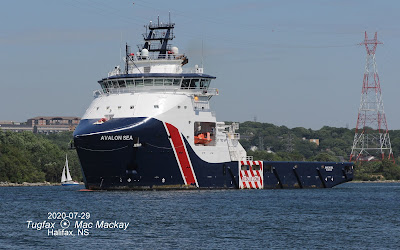 At first the tug, towing the semi-submersible barge BOA Barge 37, headed from its Pier 9C berth to Bedford Basin where there was more room to turn. 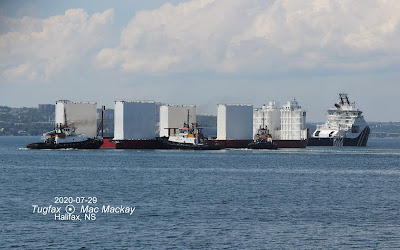 With assistance from Atlantic Fir (stern) Atlantic Willow ( starboard quarter) and Atlantic Oak the tow was turned in about 40 acres or less. 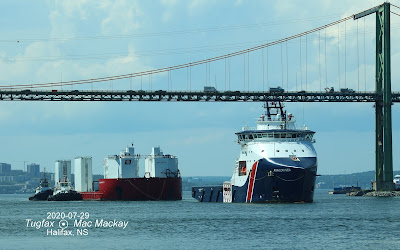 The tow was then straightened out for passage under the MacKay bridge.

Destination is Mulgrave, NS where the barge will be used to carry a new crane to Argentia, NL where it will be stored until next year for installation on the Hibernia gravity base oil production and storage centre. The crane was to have been installed this year by the crane ship Thialf but time ran out for a variety of reasons, including COVID-19.