The impressive SMPV (Subsea Multipurpose Vessel) Pacific Constructor made a brief stopover in Halifax today (July 31) en route to the Sable Offshore. The ship has apparently been deployed from the Pacific Ocean as its last stop was given as the Pacific anchorages of the Panama Canal. 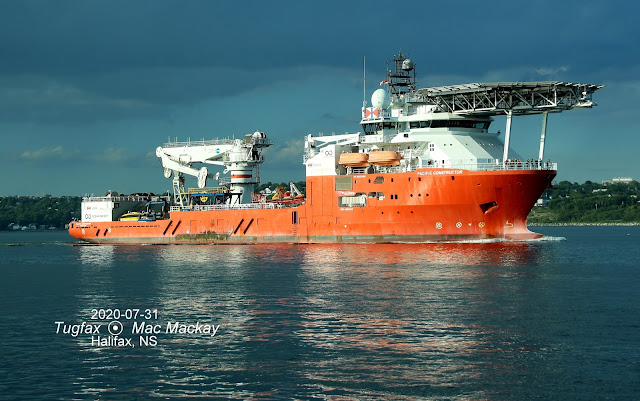 Operated by Swire Pacific Offshore, it is a 8133 grt, 14,946 bhp ship built in 2014 by Kleven Ulsteinvik. Among its many features is the heli deck for a Sikorsky S-92, a 250 tonne heave compensated crane and all the gear to house and deploy an ROV. 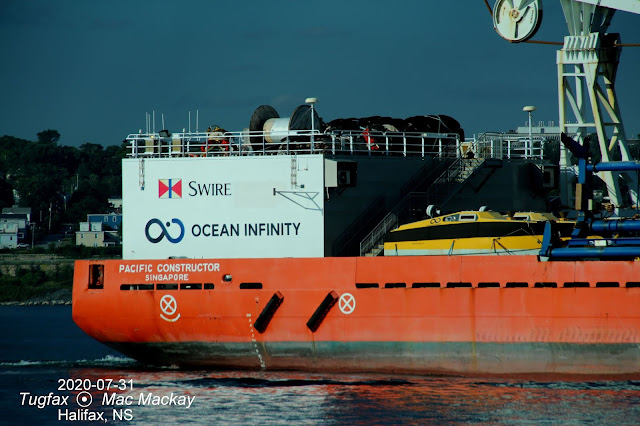 The structure on the after deck carries the name of Ocean Infinity a US/UK outfit that operates dozens of marine robotic vessels used for underwater inspections. Their black and yellow colour scheme is carried on one of their devices which appears on deck.
When built the ship was named Olympic Boa but was renamed Olympic Athene briefly in 2016, then Seabed Constructor when acquired by Swire. It was renamed again the first of this year.
.
Posted by Mac at 10:16 PM