Most transatlantic tows from Canada involve large barges or ships eastbound en route to the scrap yard in Turkey. Last night (December 5) marked the arrival in Halifax of  a somewhat smaller vessel. The barge Jacob Joseph C, 2076 GT in tow of the tug Amy Lynn D. Tug and tow are of interest in themselves, but of added interest is the deck cargo on the barge - three small tugs.

The tug Amy Lynn D is much traveled since it was built in 2013 by Damen's Hardinxveld shipyard in the Netherlands.  Originally named Otago it operated for Damen's own chartering fleet, but in New Zeland. In 2018 it as sold and renamed MSC Allianz Explorer by Allianz Middle East under the management of Maritime Craft Services Clyde. Earlier this year Damen apparently did a buy back and re-sold the tug to Canadian owners the Doornekamp company of Odessa, ON. They renamed the tug Amy Lynn D and it will be put to work in the Wolfe Island area in eastern Lake Ontario. 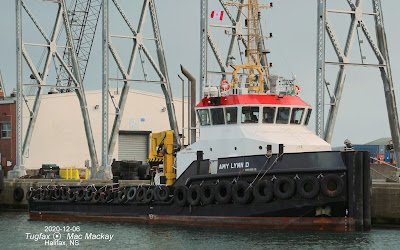 The tug was last working in the United Arab Emirates, and sailed from there to Algeciras, Spain (Gibraltar) where it rendez-voused with the barge. Also a Damen standard product (called a Stanpontoon), the barge had departed Rotterdam about a month ago and was towed to Algeciras. 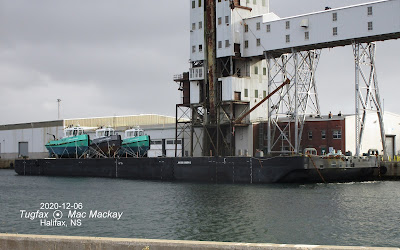 On board the barge are three small tugs of the Damen Stantug 1205 class. Powerful for their 13m length, the 600 bhp vessels deliver a 8.5 tonne bollard pull. Standard main engines are Volvo driving twin screws in nozzles. They are also fitted out to a very high standard of finish with a complete suite of navigation gear. 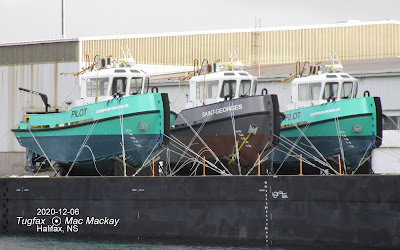 Two of the tugs are destined for local owners, Dominion Diving Ltd. The company operates a number of work boats to support its diving and other work, but also provides line boat and pilot and agent transport in Halifax harbour. The Dominion Rumbler and Dominion Enforcer will be off loaded from the barge - weather permitting - December 7.

The third tug, Saint Georges is destined for Quebec owners and will remain on the barge until it reaches Quebec.