A regular Halifax based tug for several years is the Atlantic Willow. One of the large series of ASD tugs built by Irving Shipbuilding's Eastisle Shipyard , it was based on the original Robert Allen Ltd design, but with some modifications. It entered service in 1998. Atlantic Willow moves between assignments in Halifax harbour.
It is still using the winter shelter over its ship handling winch on the foredeck.

It was the first tug in the series to be built with the full firefighting package, because it was intended for use at the NuStar oil terminal at Point Tupper, on the Strait of Canso. Presumably that is why it is the only tug in the ATL fleet registered in Port Hawksbury, NS instead of the company's home port of Saint John, NB. It was also equipped with a towing winch aft.

The tug is rated at 4,000 bhp / 50 tonne bollard pull - somewhat less than the 5,000 bhp / 66 tonne, 5,500 bhp / 70 tonne ratings of the other Halifax tugs. Nevertheless it is still a hard working member of the fleet and it is often designated to work at the bow of a ship and with the smaller ships.

In case the above photo is a bit placid looking, it should go on record that the tug can "step out". 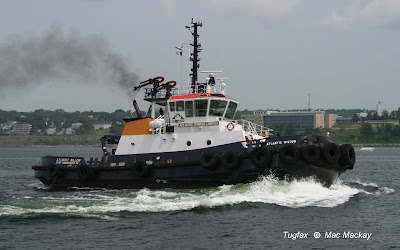 Irving tugs have traditionally been named after trees, because the company got is start in the tug business by towing timber on the Saint John River. Originally the river tugs were named for coniferous (softwood) trees (used for lumber and paper making), whereas coastal and ocean tugs were named for deciduous (hardwood) trees. No distinction is made now since some harbour tugs work coastal, and there is no longer any river work.

However, due to the limited number of local tree species, the names do get re-used. Such is the case of the willow, a name used in the fleet from 1980 to 1996. Irving Willow was built in 1958 by J.I.Thornycroft in Woolston, UK for Red Funnel Tugs of Southampton, UK as Dunnose. It was one of a series of first generation twin screw diesel tugs, built to serve the large ships, including the "supertankers"  of the 1950s. Its two 6 cylinder Crossley's giving 1340 bhp became obsolete for that purpose as ships continued to grow, and it was replaced with a new generation. Irving acquired four tugs from the Red Funnel fleet, three of which went into regular service. Irving Willow with dump scows at a dredging site in Yarmouth, NS in 1985.

CORRECTION: The Atlantic Willow does not carry a towing winch. The most photo I have that shows the tug from the stern, has a picnic table where a towing winch could be installed if needed. 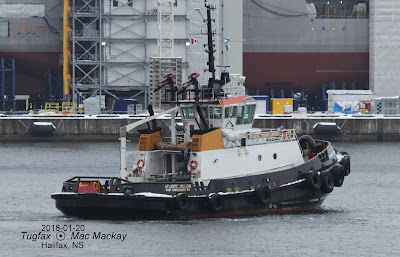 CLARIFICATION: In addition to Atlantic Willow, 4,000 bhp, Atlantic Towing Ltd normally posts two 5,000 bhp tugs and one 5,500 bhp tug in Halifax. The one larger tug is drawn from the three tugs built for working with LNG tankers at the Canaport buoy off Saint John, NB. If needed for an LNG tanker it will return to Saint John, but this is now a rare event. Currently that tug is Atlantic Beaver. The two 5,000 bhp tugs based in Halifax are Atlantic Oak and Atlantic Fir.

Thanks to readers for pointed out the error and inaccuracy in the last post.