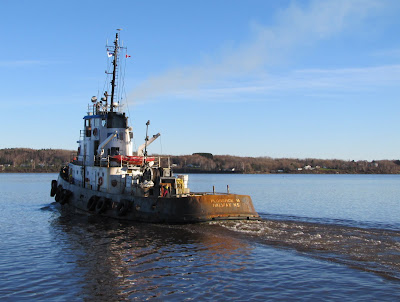 1. Florence M leaves the Pictou wharf to head out to the barge to begin salvage work, November 12. 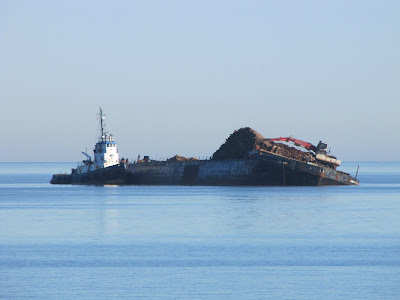 2. Florence M lies alongside the grounded barge Sault au Cochon off Pictou. The calm conditions November 13 are far different from the storm on November 10.
The former Halifax tug Florence M was towing the barge Sault au Cochon toward Pictou, NS Wednesday, November 10 in storm force winds and high short seas when her tow line parted. The barge drifted ashore near Pictou Lodge and dumped much of her load of pulpwood.
The tug was built in 1961 as Foundation Vibert for service in Baie Comeau, QC. Built with the then revolutionary hydroconic hull form (using flat plates instead of compound curved plates) it was a product of the P.K.Harris yard at Appledore, North Devon, UK. A twin screw tug, she is powered by two 4 cylinder Fairbanks Morse (opposed piston) Diesels, each developing 666 bhp.
Her intended service was to work in Baie Comeau, QC in summer then move to Halifax for the winter. By the 1970s however, Baie Comeau remained open year round, and larger ships began calling there. The newly formed Eastern Canada Towing Ltd, renamed the tug Point Vibert in 1973.
In 1977 Cargill Grain had the V-S tug Pointe-Comeau built with Ectug as managers, for service at Baie Comeau. Point Vibert was transferred to Halifax. Despite its limited power, it served as #2 tug in Halifax until Point Chebucto was delivered in 1993. The tug then went to Port Hawksbury until Ectug (Svitzer) withdrew from the Strait of Canso.
In 2001 McKeil Marine bought the tug and renamed in Florence M. It has since had a towing winch installed and has been working in barge service on the Lower St.Lawrence and Gulf for the past several years.
The barge Sault au Cochon was built by Port Weller DD in 1968 with the barge Betsiamites and tug Atlanitc (later Laval and now Ocean Echo II.) They were used to shuttle pulpwood from Forestville, QC to the Anglo-Canadian paper mill in Quebec City. When that service was halted by later owners, Sault au Cochon was acquired by Sablico and used for sand and gravel transport during the construction of the Confederation Bridge to PEI. In 1995 while loading gravel at Forestville, Quebec the barge broke in half. The barge was completely repaired and later sold to McKeil Work Boats of Hamilton, ON.
It has returned to pulpwood transport in the past several years and has worked all over the Gulf and Lower St.Lawrence.
As of November 13 salvage operations were underway on the barge and its cargo.
.
Posted by Mac at 8:44 PM